MUSKEGON HEIGHTS – Clayton Cochran was a basketball referee, and a very good one at that.

But he was truly passionate about the sport that he excelled in as a young man, and loved to teach kids the right way to play it. So sometimes when he worked a game, he became a little less of a referee and a little more of a coach. 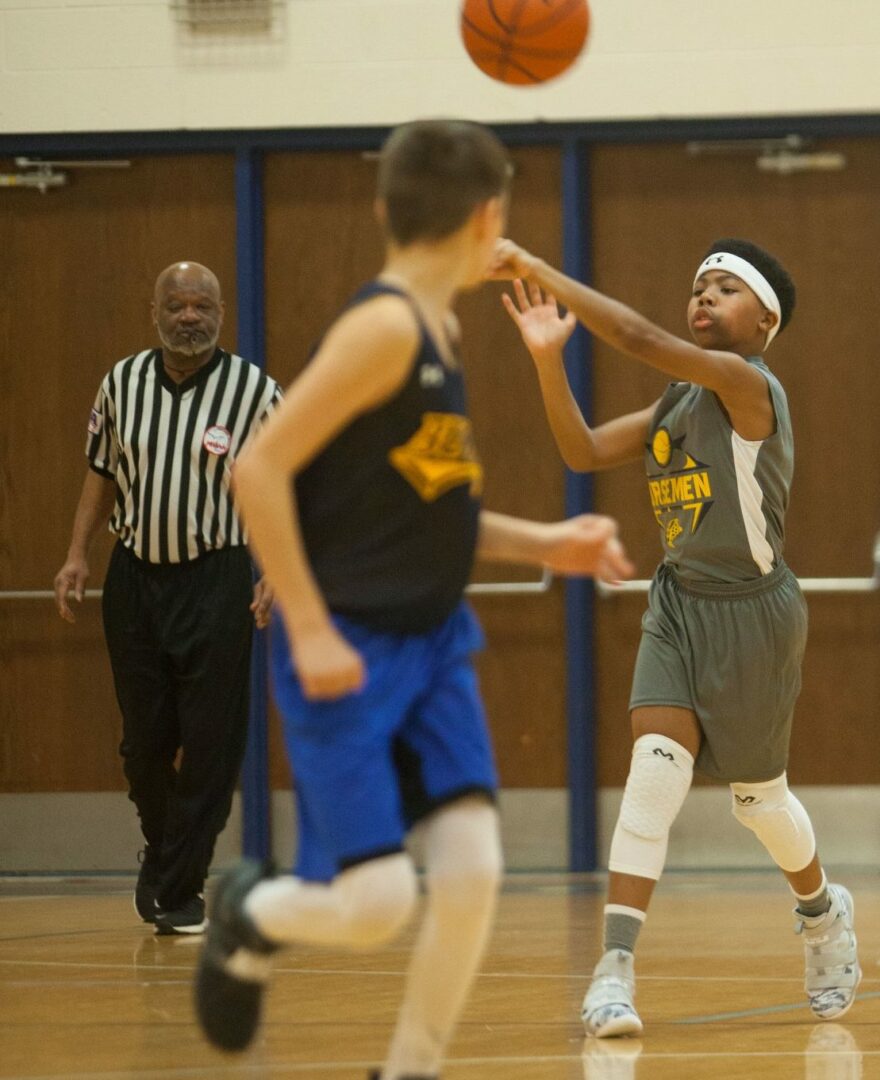 Nobody seemed to mind.

“As a referee, especially during those summer games, he would take the time to help a kid understand the game,” said Muskegon County Probate Judge Greg Pittman, who first started playing sports with Cochran during their youth league days. “Try this or be careful about that, he was always coaching while he was reffing, because he knew the game and wanted to help the next generation.”

Cochran, 59, who went from being a state champion high school basketball player to a deeply respected, longtime game official, passed away suddenly last week from complications following a heart attack.

Cochran, known to friends as “Po Rich,” left a legacy on the court that goes back decades, and sparks happy memories for a lot of older local players and fans.

Cochran was the starting point guard for the Muskegon Heights Tigers when they won back-to-back Class B state championships in 1978-79. Both of those teams were elected to the Muskegon Area Sports Hall of Fame in 2015.

Wearing No. 12, Cochran ran the point for the Tigers like a coach’s dream.

“He was one of the best,” said legendary Muskegon Heights coach Lee Gilbert about Cochran. “I feel like Clayton was one of the key players in the school’s history. He was a coach on the floor for us.

“He was the glue, and he wanted to make sure the show was run proper. If you looked up the definition of a point guard, it was Po Rich.”

But he and his classmates started dreaming of winning the state title long before they reached high school.

“We talked about it (the state titles) the last time I saw him,” Gilbert said. “Rich remembered how it was a conversation that started way back, that it was something those guys said they wanted to do. And to achieve what they did after all that time of working for something, it was icing on top of the cake for all of us.” 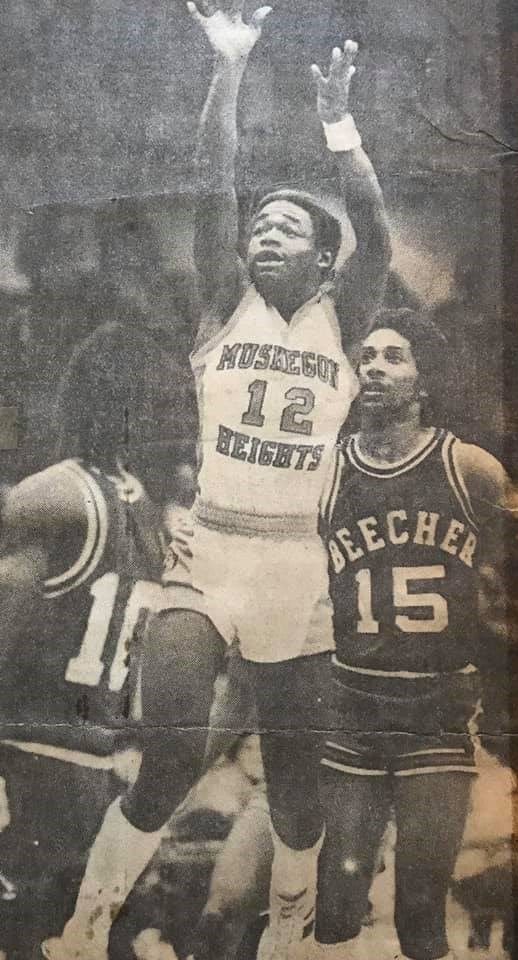 Cochran takes a shot in the lane for Muskegon Heights during against Flint Beecher. Photo/MASHF

Teammate Donnell Plummer remembers when he started competing with Cochran, all the way back in fourth grade.

“We were playing at the park one day and everyone was talking about how good Rich was.” said Plummer, an All-State forward in 1979 and a member of both Tiger state championship teams. “We went to his grandmother’s house that day and woke him up. He came down to the court at the park and scored 10 points. Back in fourth grade, that’s a hell of a game. And that’s how I met him.”

Plummer and Cochran, who went to different elementary schools, were able to join forces with talented teammates like Cedric Scott, Robert Kitchen and Doug Burse in junior high.

“Rich was a quiet guy, and whenever someone got upset, he tried to calm you down,” Plummer said. “He was a mediator. He’d get in the middle of us and stopped us from fighting. We had some attitudes on that team and we needed someone who had a level head. He was an all-around guy.”

Cochran was not the starting point guard when he started his junior season of varsity basketball, in 1977-78. It wasn’t until midway through the season that Coach Gilbert decided he was ready to run the offense.

“About halfway through the season, coach made Rich the starter and the rest is history,” said Pittman, whose son Jared played college sports and was mentored by Cochran through his high school and collegiate careers. “Rich was very bright, savvy, knew how to manage the world around him.”

With three All-State players on the Muskegon Heights roster – Kitchen, Scott, and Plummer – Cochran had the challenge of distributing the ball evenly on offense. He didn’t care how many points he scored, as long as the team won.

“He wanted to be the best player, ever since I knew him,” Burse said. “We’d had rivalry games against each other back in grade school, and he scored a lot. But in high school, he didn’t care about scoring unless he had to. He made sure his players got the ball, he made everyone around him better.”

One of the more memorable moments for Cochran came during the 1978 Class B state semifinals against Alma. With barely any time left on the clock and the team trailing by two points, Cochran sank two free throws to send the game into overtime and pave the way for victory.

“Rich could find his way throughout the game to hit those points at needed times,” Coach Gilbert said. “He would always come up with those plays.”

After his playing career ended, Cochran spent nearly 40 years contributing to the sport as a referee. From high school games, to Saturday morning youth leagues, American Youth Basketball Tour summer tournaments and AAU events, Cochran loved the job and the opportunities it provided to connect with players, coaches, parents and fans.

“We reffed thousands and thousands of games together,” said close friend Clinton Todd. “He helped school and train me in the art of refereeing. He helped prepare me to stand on my own in those hostile gyms, he taught me the art of managing the coaches, the crowd, the team, the whole thing.”

Local coaches hailed Cochran as a high-quality referee and a friend. 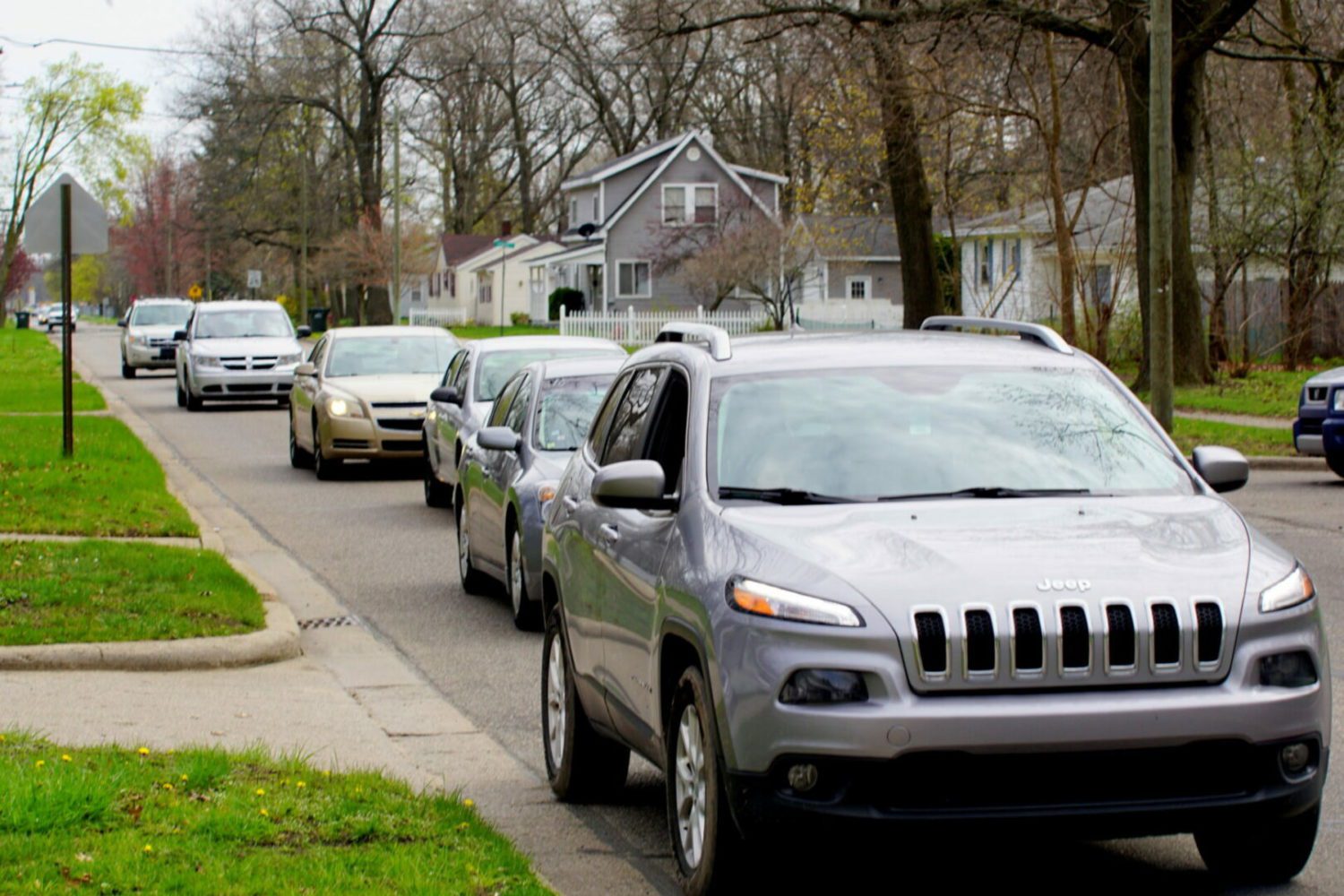 Tough times during pandemic: North Muskegon fans line up to pay tribute to Cochran by driving past his house on May 1. Photo/Leo Valdez

“So sad to hear this,” Spring Lake girls varsity coach Rich Hyde wrote on a Facebook post. “Clayton was a great person to have in our games all these years. He will be missed. Thoughts and prayers to his family.”

“Truly a fantastic person,” longtime Whitehall boys varsity basketball coach Nate Aardema commented. “I will miss having him as an official and I feel for his family and friends.”

Several local parents commented online about how Cochran was more than a referee when he worked a game.

“We loved having him ref our games!” wrote Stephanie Dahlquist. “He made such a positive impact on the parents and the kids. He will be missed by so many!”

Visitation is set for Monday, May 4 from 11 a.m. to 1 p.m. at Fountain Funeral Home at 1765 Peck St. in Muskegon. Due to social distancing rules, only 10 people will be allowed to enter the funeral home at a time. 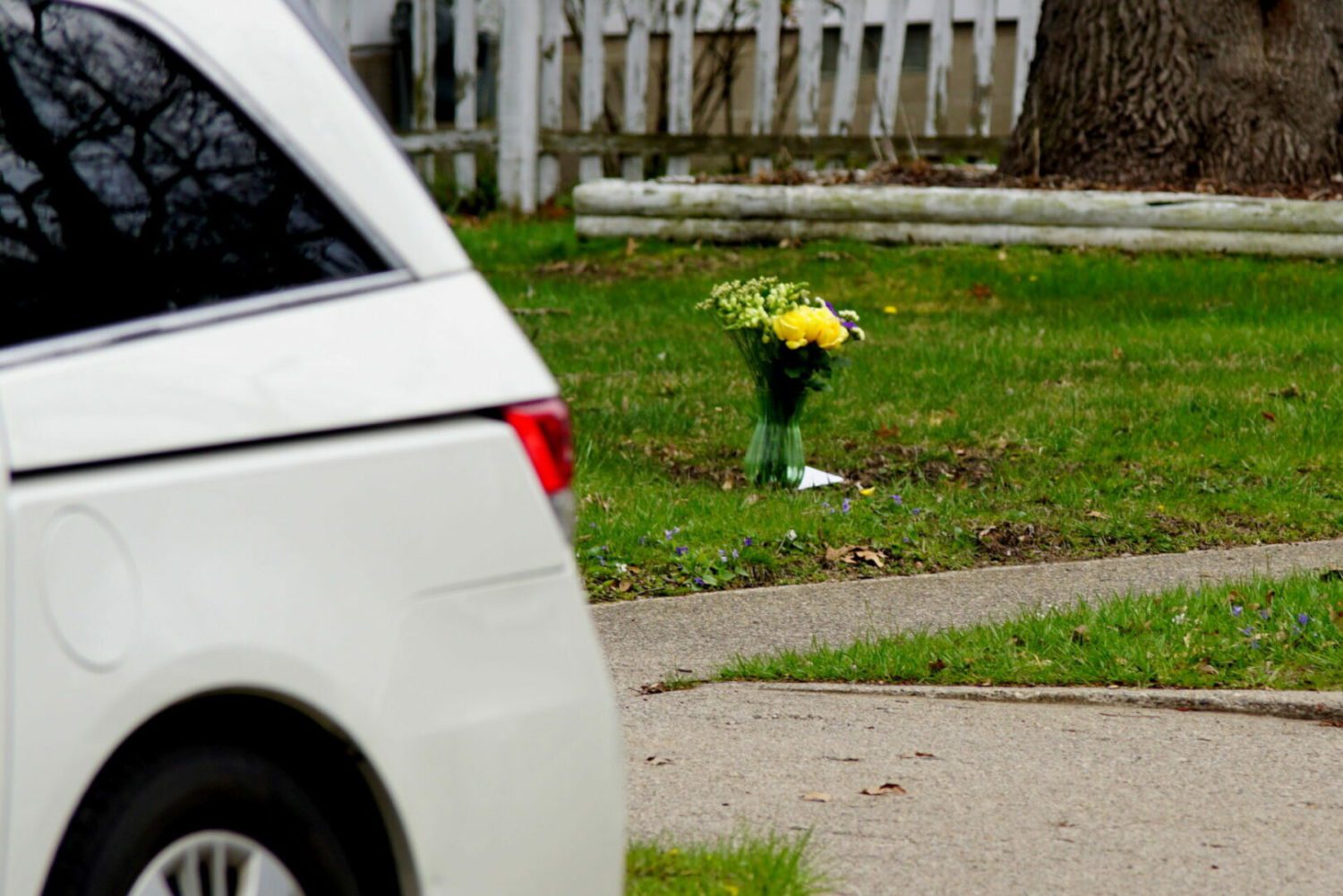 Flowers sit on the lawn of Cochran’s from a North Muskegon fan. Photo/Leo Valdez 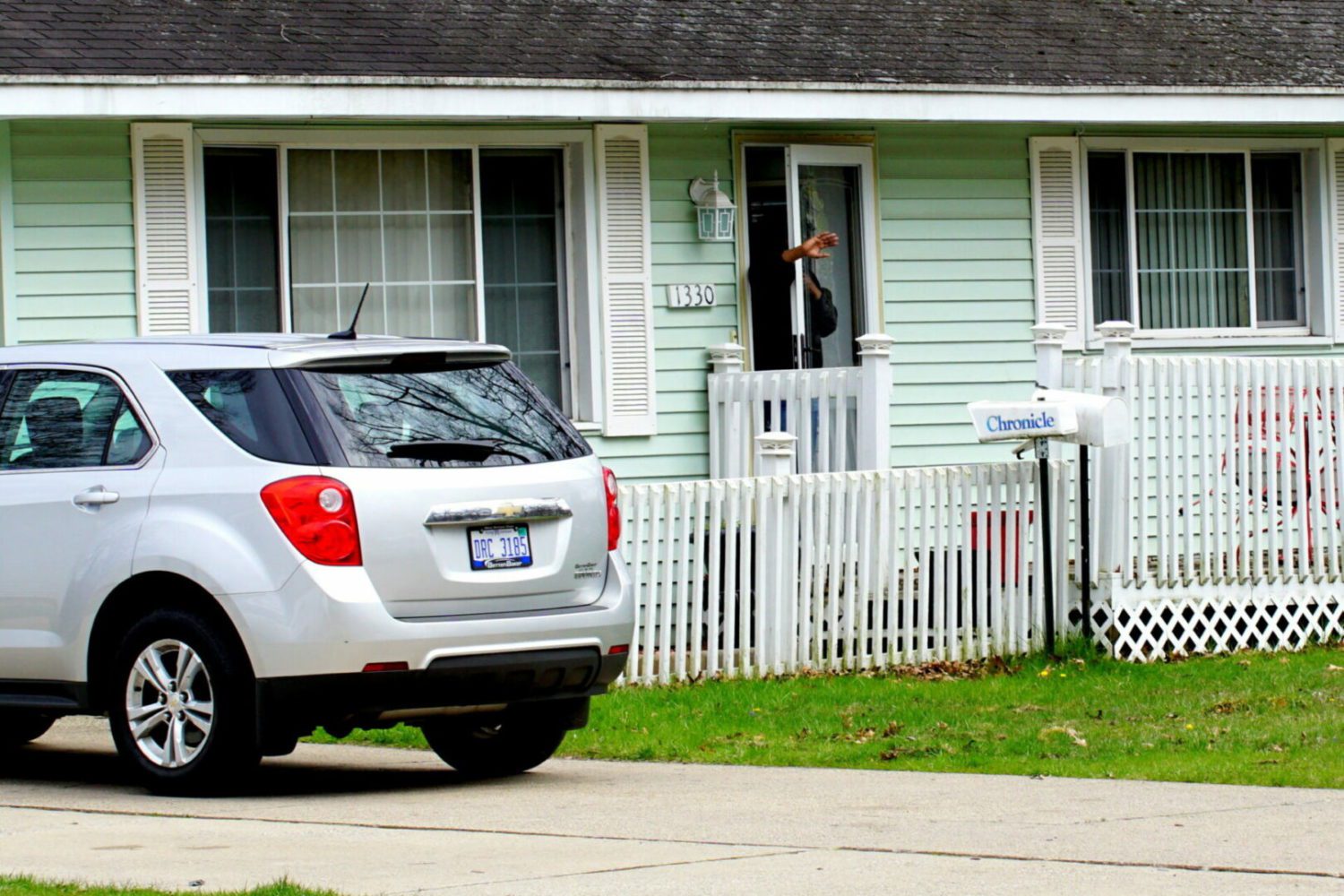 Tough time of during a pandemic: Cochran’s wife Annette Cochran waves out her front door as fans drive by to pay tribute. Photo/Leo Valdez 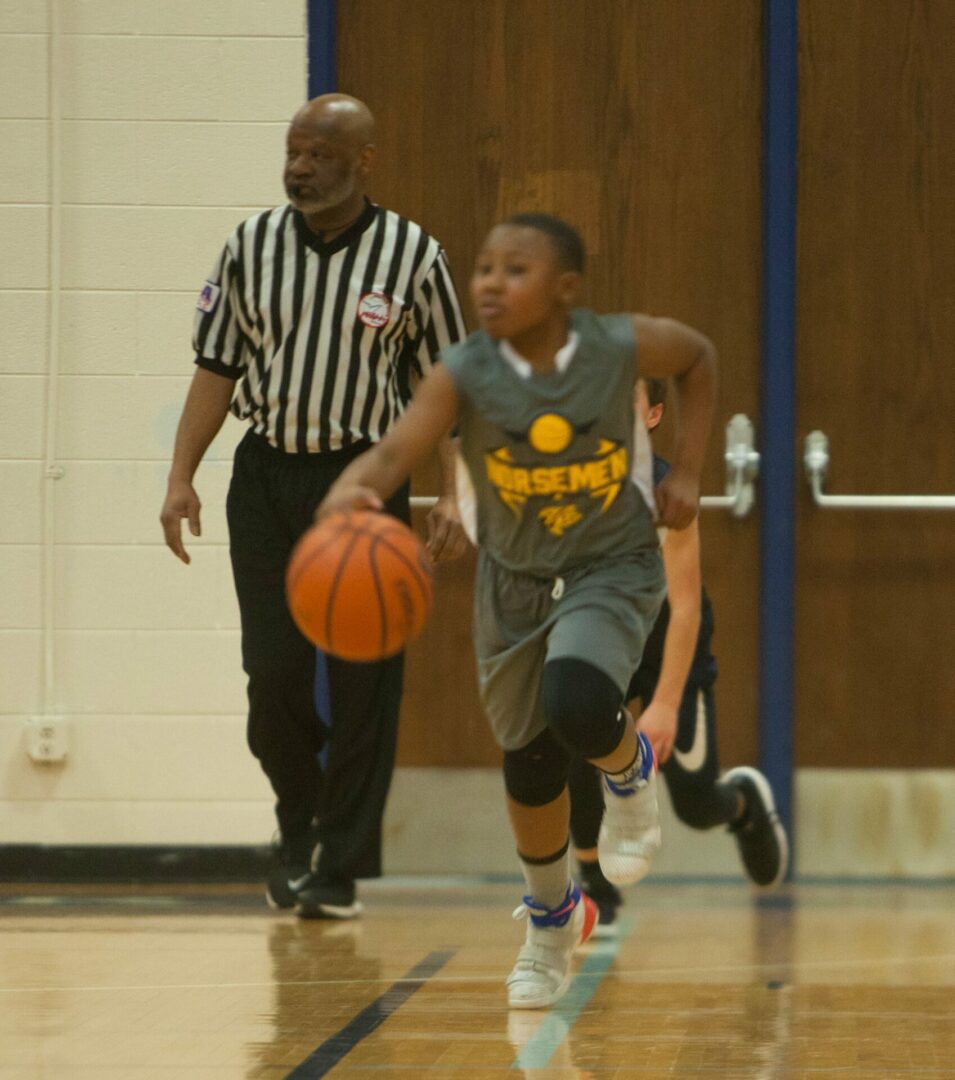