After the Hawks scored on the first possession of overtime to take a 28-21 lead, the Lakers had their opportunity with the ball. 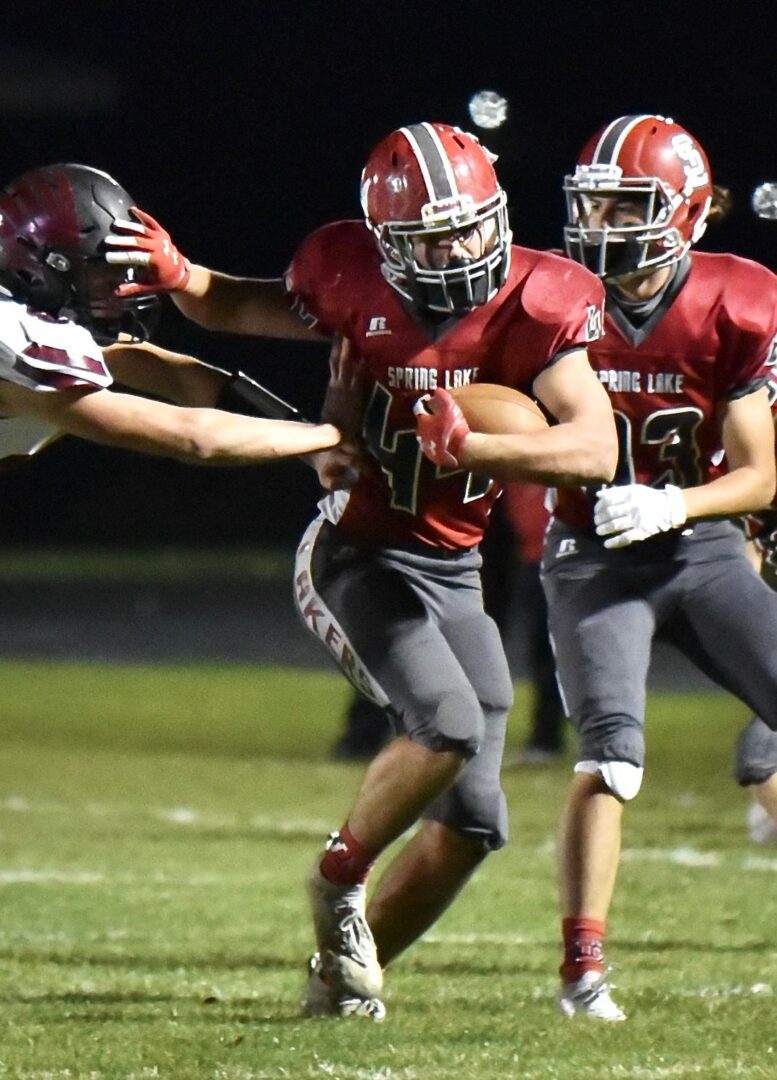 On first and goal from the 10-yard line, a bad snap led to a five-yard loss by quarterback Zach Mitchell.

On the next play, Mitchell rolled to his right and threw the ball downfield, where it was tipped and intercepted by Bryson Kuzdzal to end the game and the Lakers’ season.

“I don’t think so,” said Spring Lake head coach Dan Start, when asked if he had any regrets about not giving the ball to star running back Steve Ready on the last offensive possession. “Everyone can be a Monday morning quarterback on the last play, but I told (assistant) Coach Jewett it was going to be a touchdown when he called the last play.

“We just missed it by a little bit, and they made a great play on a tip ball. That’s playoff football, and it’s the little things that make or break it.”

Forest Hills Eastern jumped out to a 6-0 lead with 2:32 remaining in the first quarter on a 15-yard touchdown run by John Morgan.

In the second quarter, Mitchell found Ty French with an 18-yard touchdown pass, giving the Lakers a 7-6 lead with 2:47 left in the first half.

Spring Lake then forced a quick three-and-out to get the ball back with 1:43 left in the half.

The Lakers took advantage of the opportunity, scoring on a 27-yard touchdown run by Ready and extending their lead to 14-6 at halftime.

The lone score of the third quarter came on a 40-yard touchdown pass from FHE quarterback Cal Doyle to Jacob Armbrester with 4:24 remaining. The two-point conversion left the score tied at 14-14 headed into the fourth. 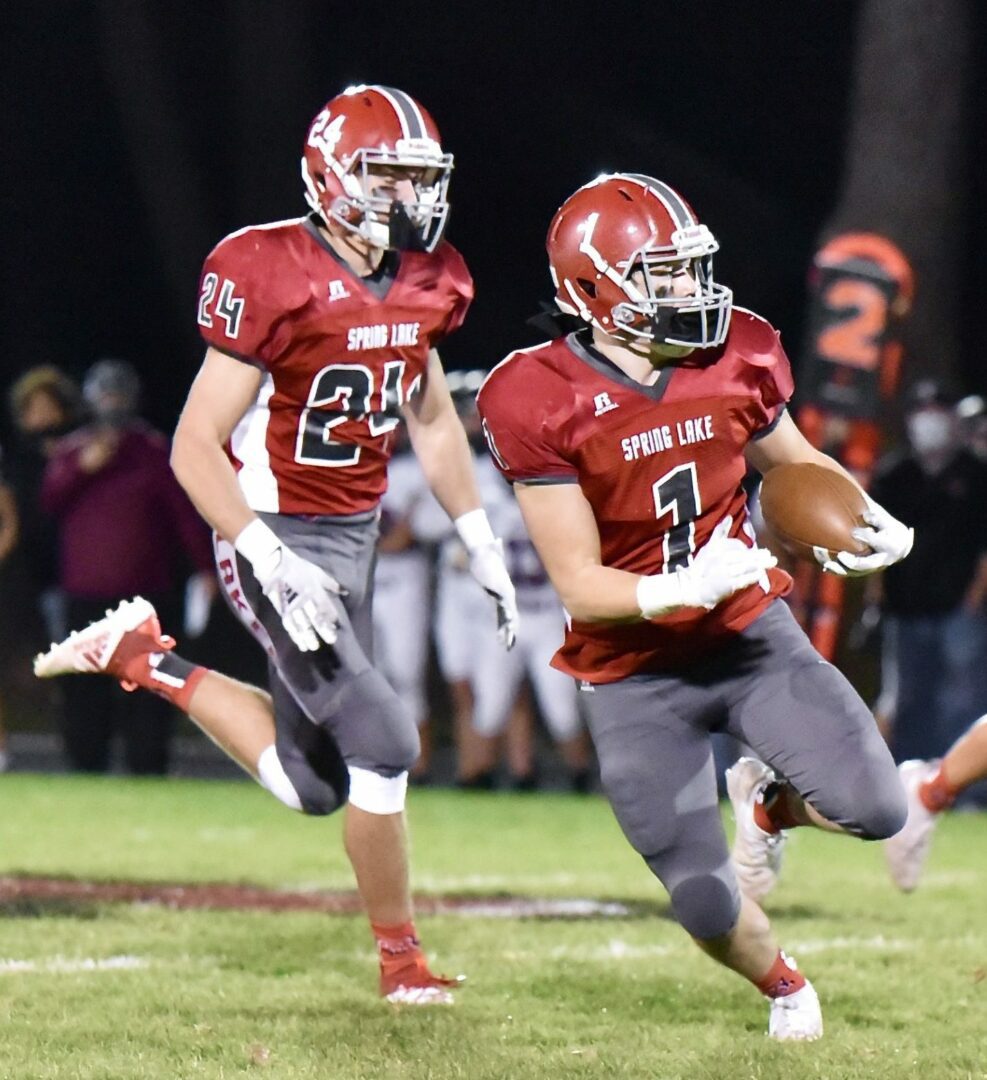 With 9:39 remaining in the fourth quarter, Spring Lake forced a turnover on downs and took over possession at the Hawks’ 46-yard line.

On the first play of the possession, Mitchell rolled back and found a wide-open Andrew Von Wahlde for a 46-yard touchdown pass, giving the Lakers a 21-14 lead with 9:32 remaining in regulation.

But the Hawks answered right back, taking the next possession 80 yards on eight plays and tying the game at 21-21 when Doyle found Armbrester on a 56-yard touchdown pass with 7:39 left.

The two teams traded possessions for the rest of the fourth quarter, but neither team was able to score, sending the game to overtime.

The Hawks had the ball on third-and-goal from the three-yard line in OT when Morgan punched in the go-ahead score to give Forest Hills Eastern a 28-21 lead, which was ultimately the final score.

Spring Lake was led by Ready, who finished with 187 yards and one touchdown on 26 carries. Mitchell totaled 46 yards on 10 carries and threw for 58 yards and two touchdowns on 3-for-10 passing.

“It’s tough,” said Ready about leaving the Spring Lake field for the final time. “That was the tenth year (of football) for a lot of us seniors playing. It’s tough to walk away after working hard for so many years, but all good things come to an end at some point.”

Forest Hills Eastern will play next week at Whitehall in the Division 4 district finals, while Spring Lake wrapped up 2020 with a 5-3 record.

“We’ve done a really good job,” said Ready about the success that he and his fellows seniors helped bring to the Lakers after an 0-9 season in 2017. “We’ve gotten better every year, and built up the team chemistry. It’s a team sport, and this is a really close team.”

The Lakers will lose seven seniors, and Start is thankful for what they’ve brought to the program.

“It’s great for the community and the kids,” the coach said. “They’ve put so much work in and I’m just kind of here giving them direction. It’s great to see these kids build the program, and they’re the ones pushing it. I’m really proud of them.” 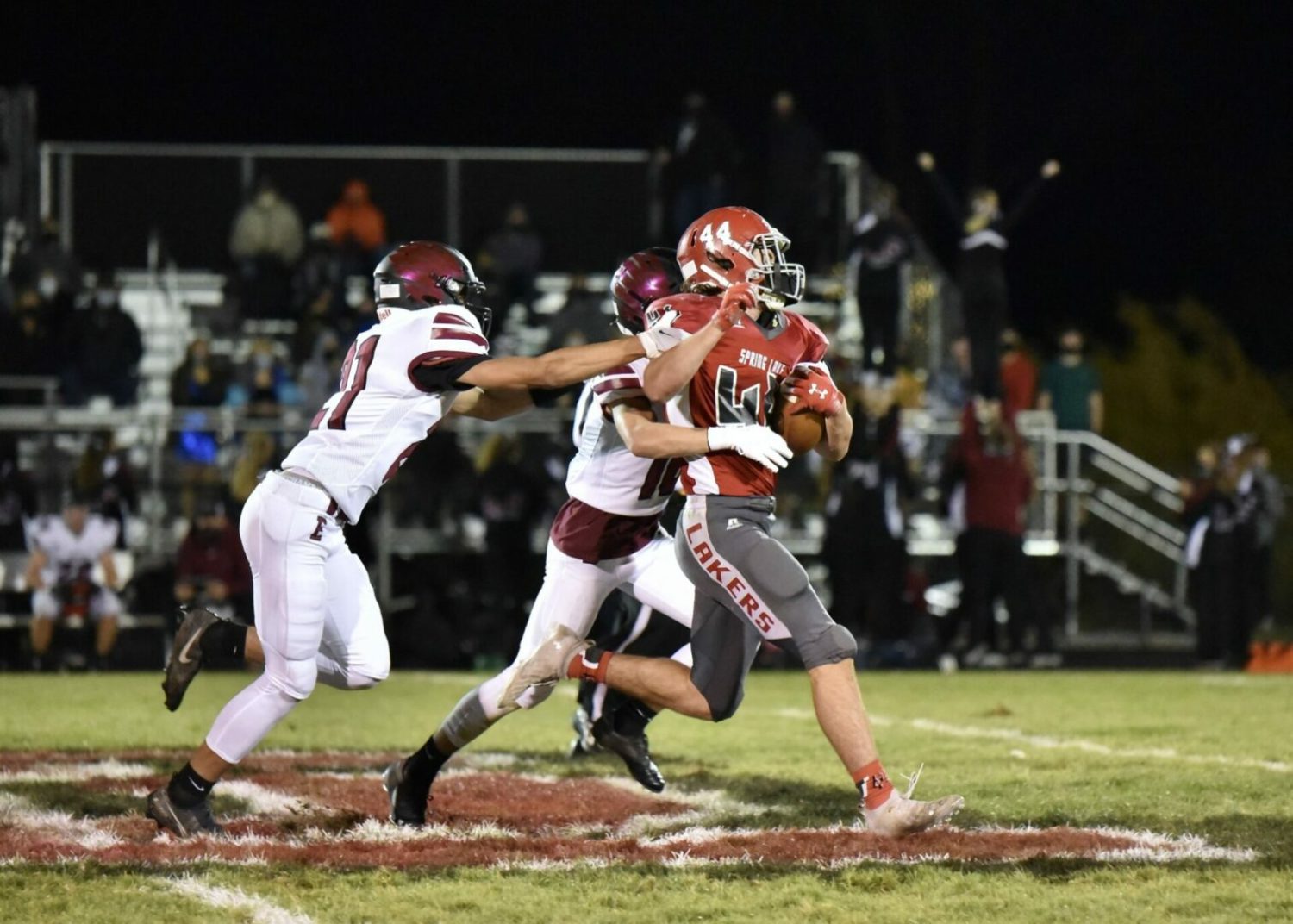 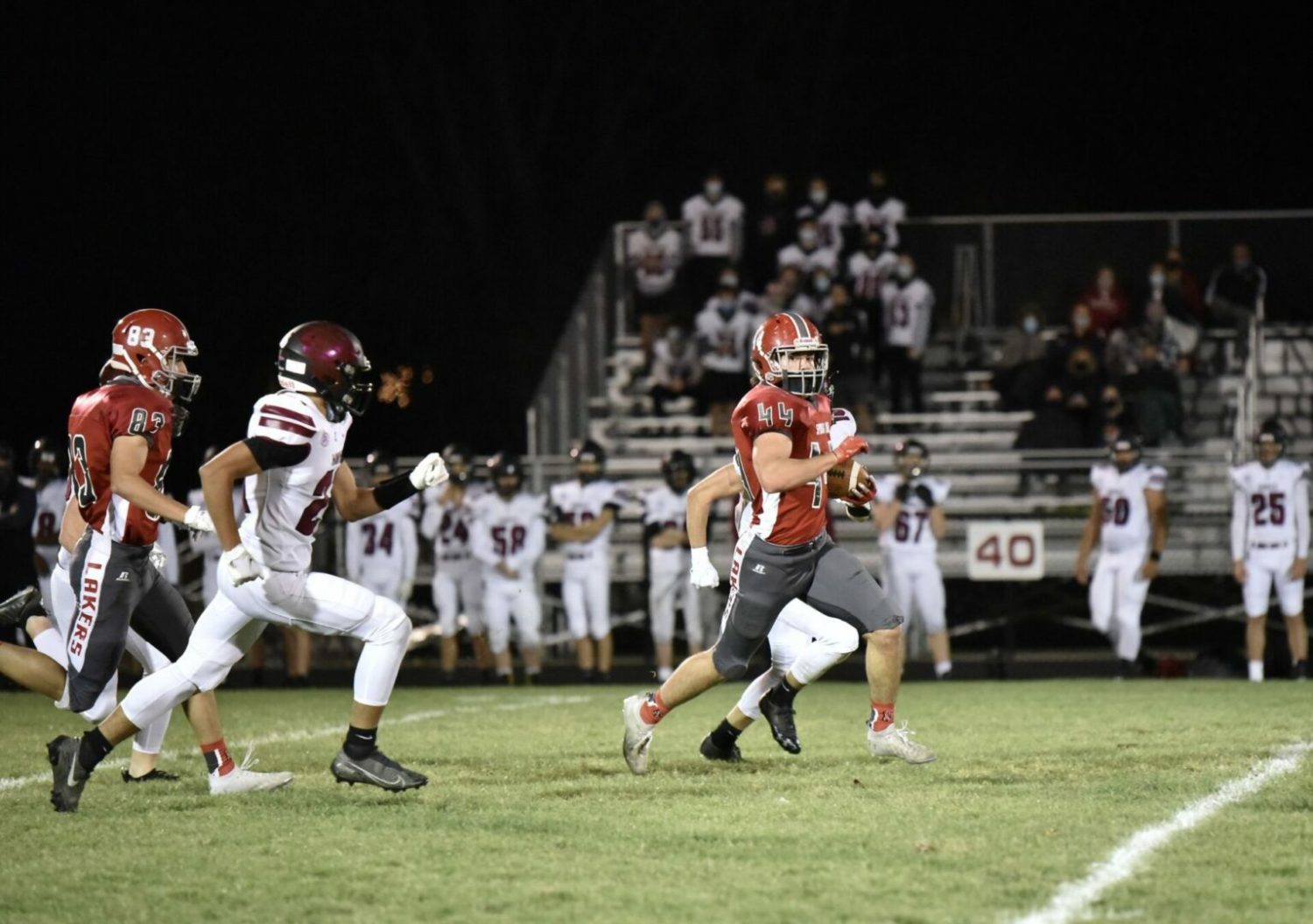 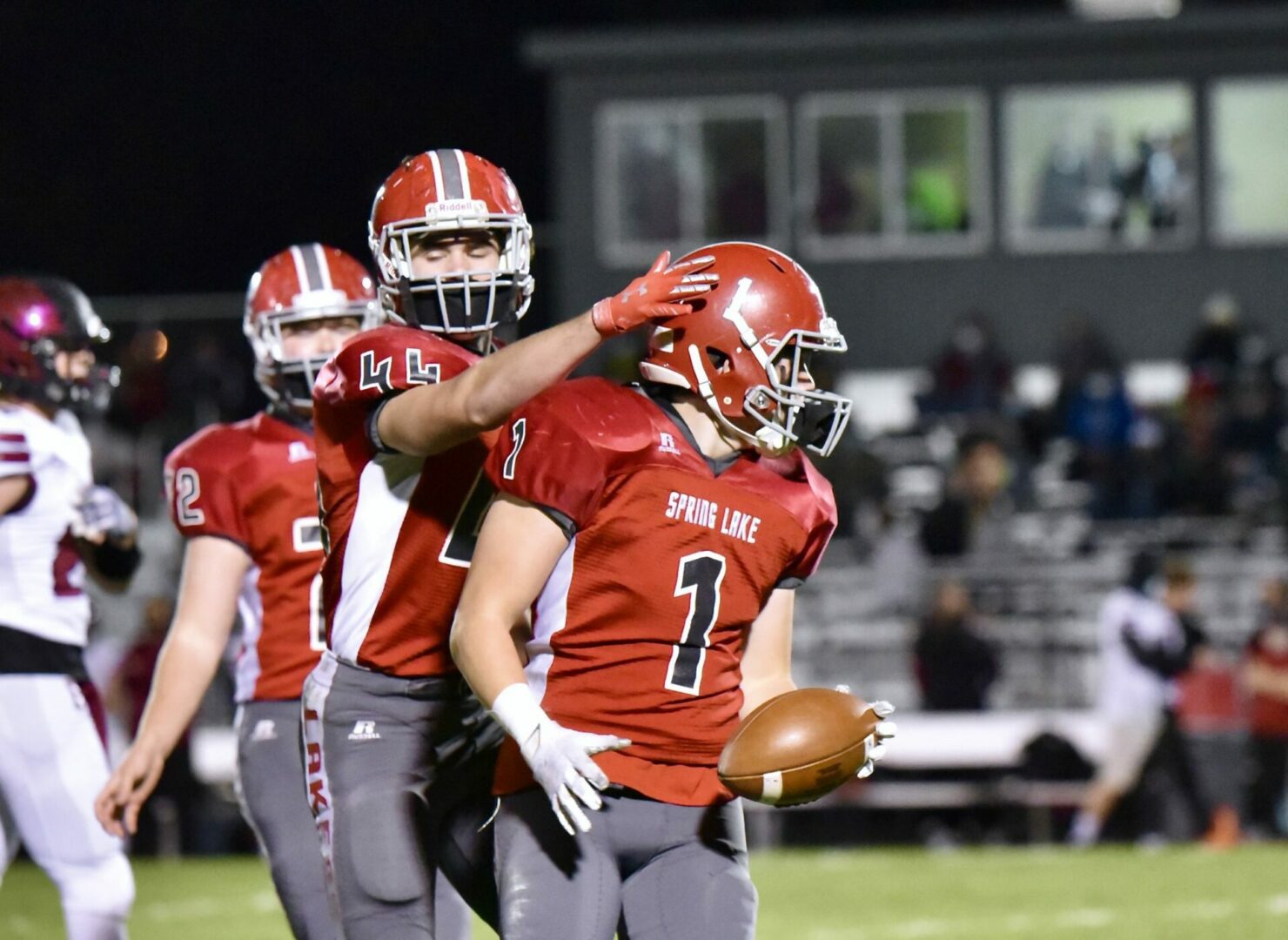 Alex Lee gets a head bump from teammate No. 44 Steve Ready. Photo/Kelly Gates 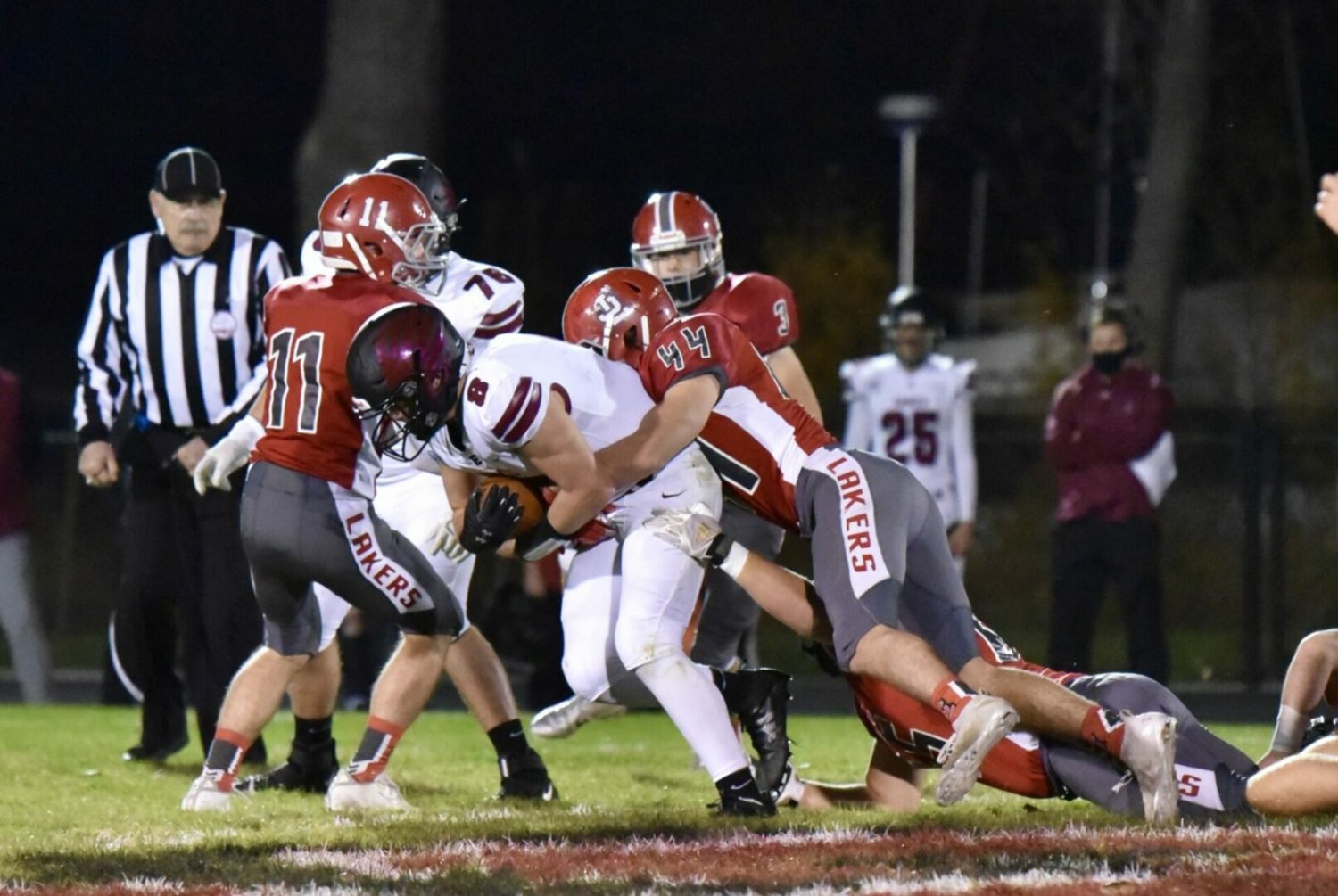 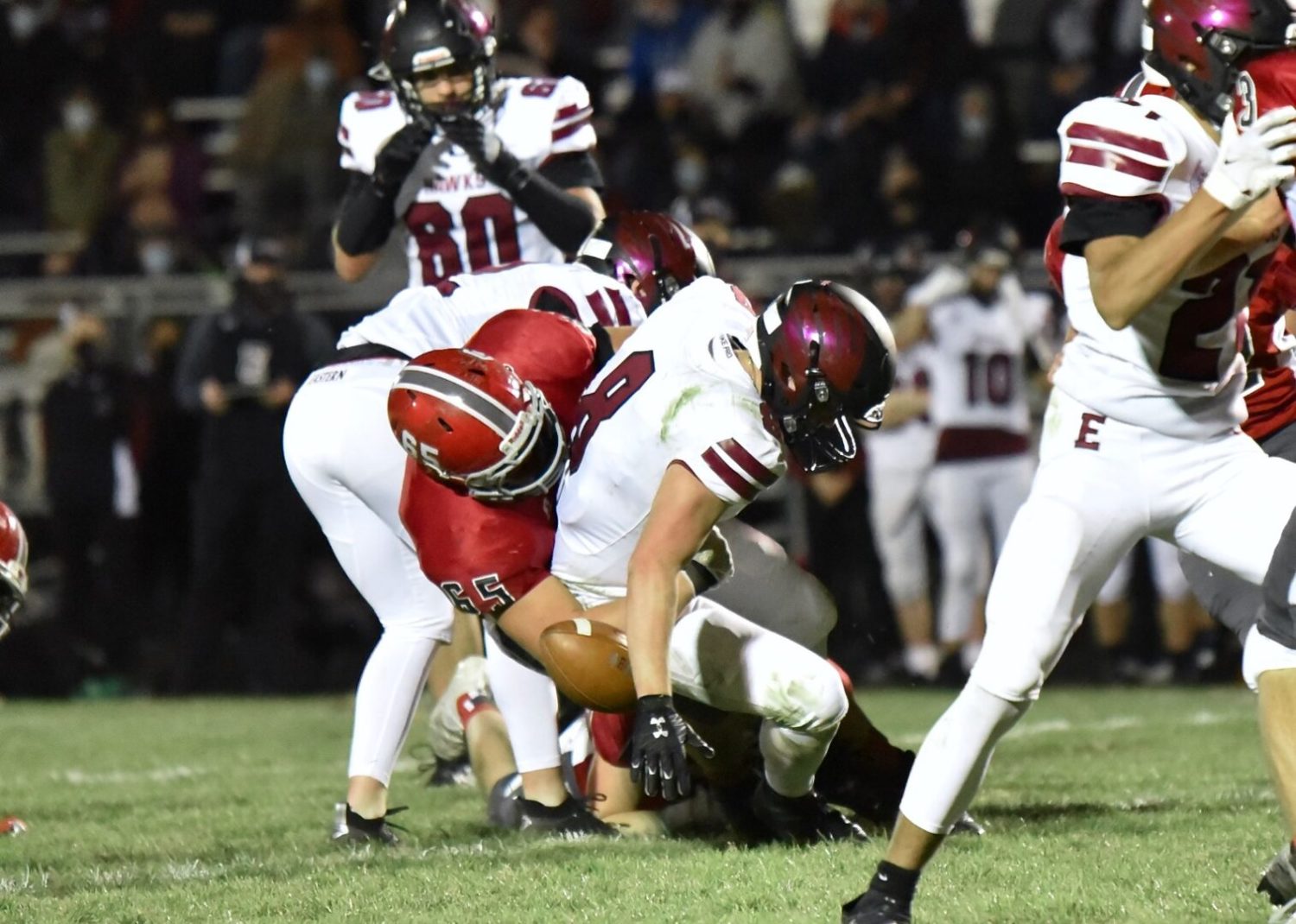 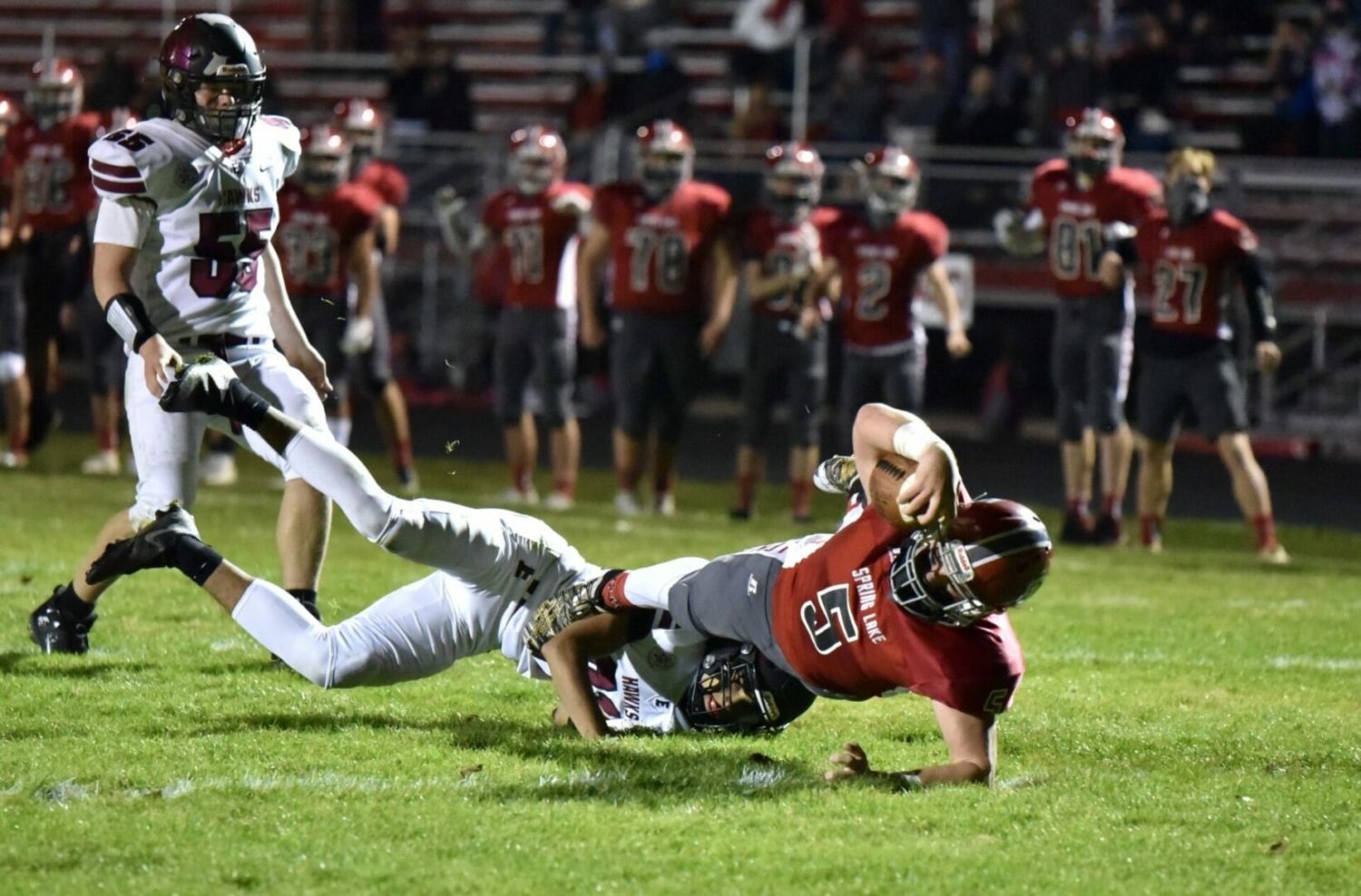 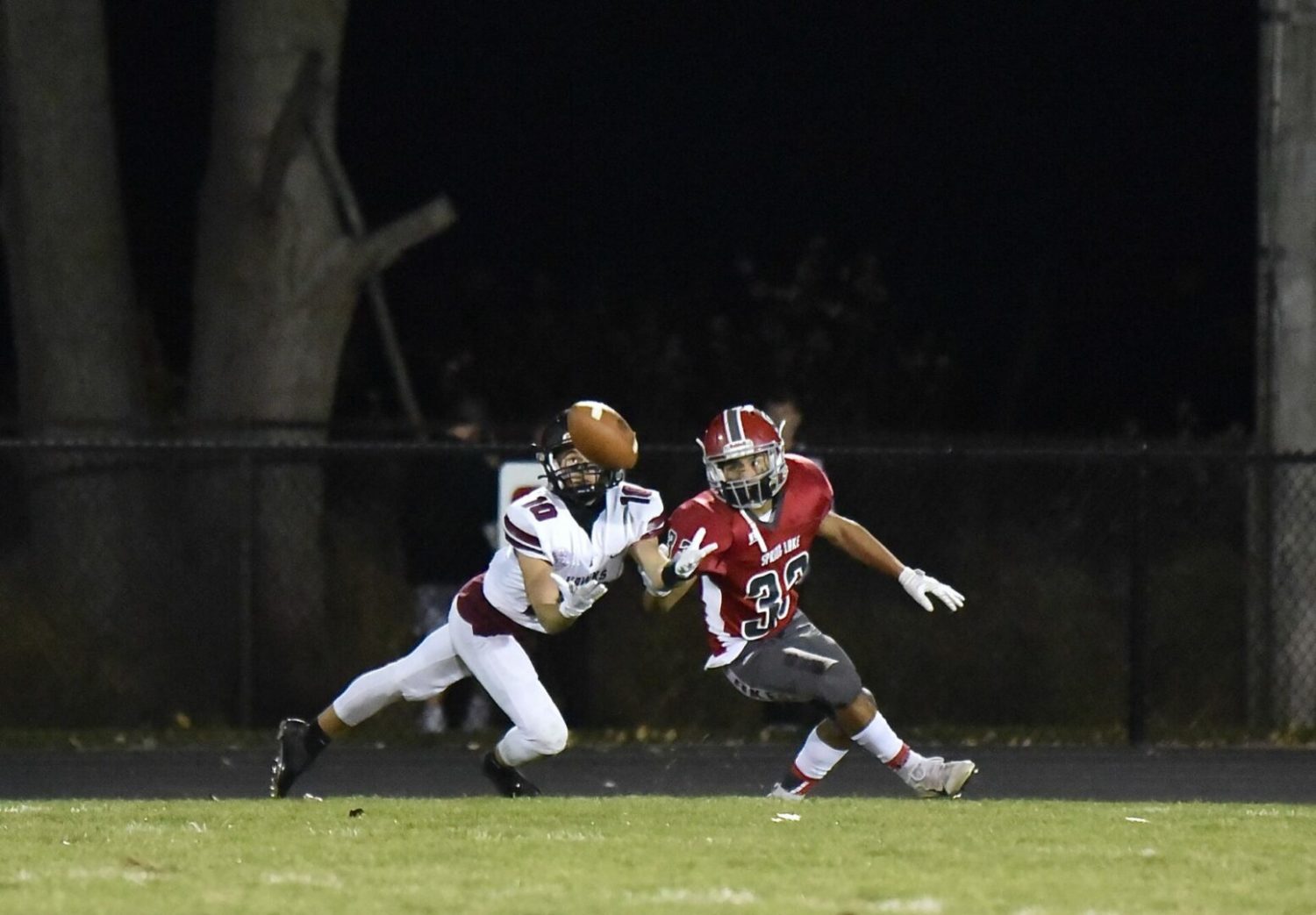 Spring Lake’s No. 32 Christian Folkert looks back at a pass. Photo/Kelly Gates 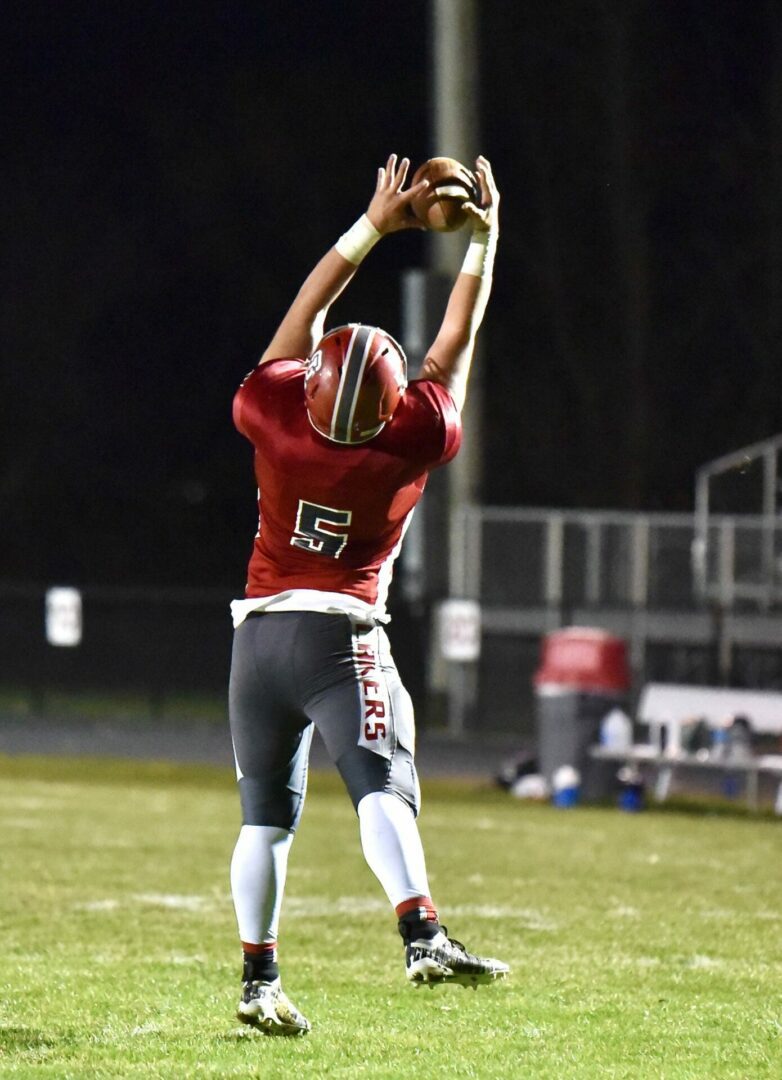 Ty Frenc reaches up to make a catch for Spring Lake. Photo/Kelly Gates 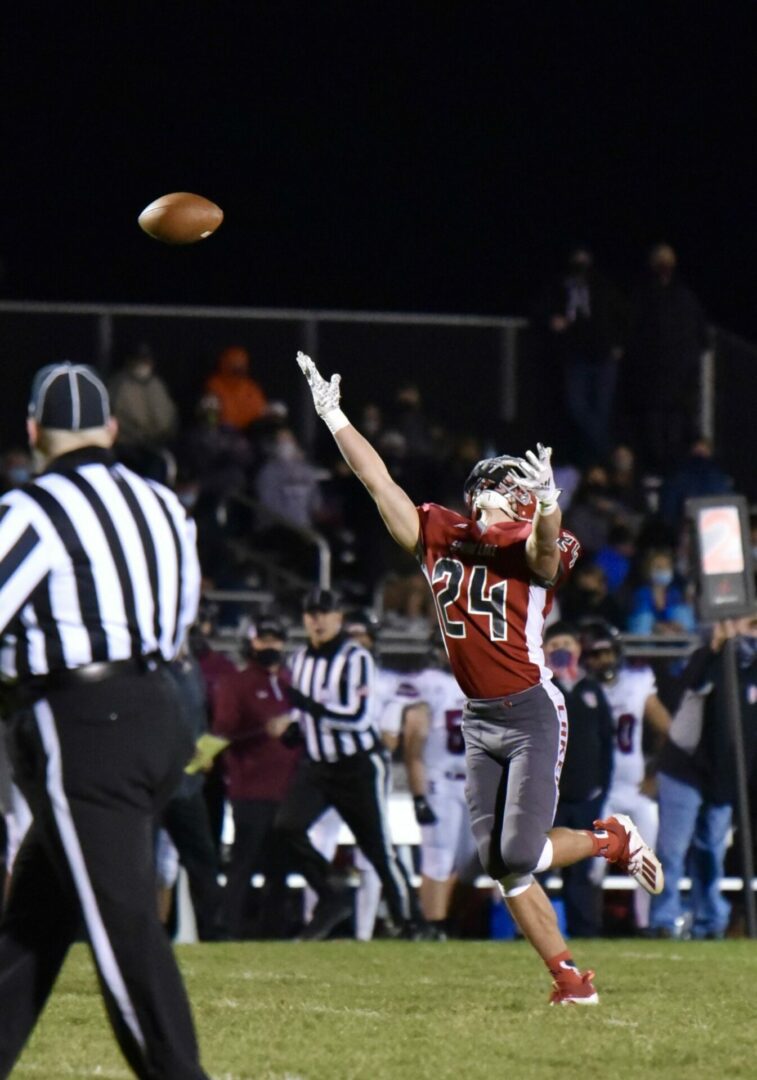 ty French barrels his way to a Spring Lake first down. Photo/Kelly Gates 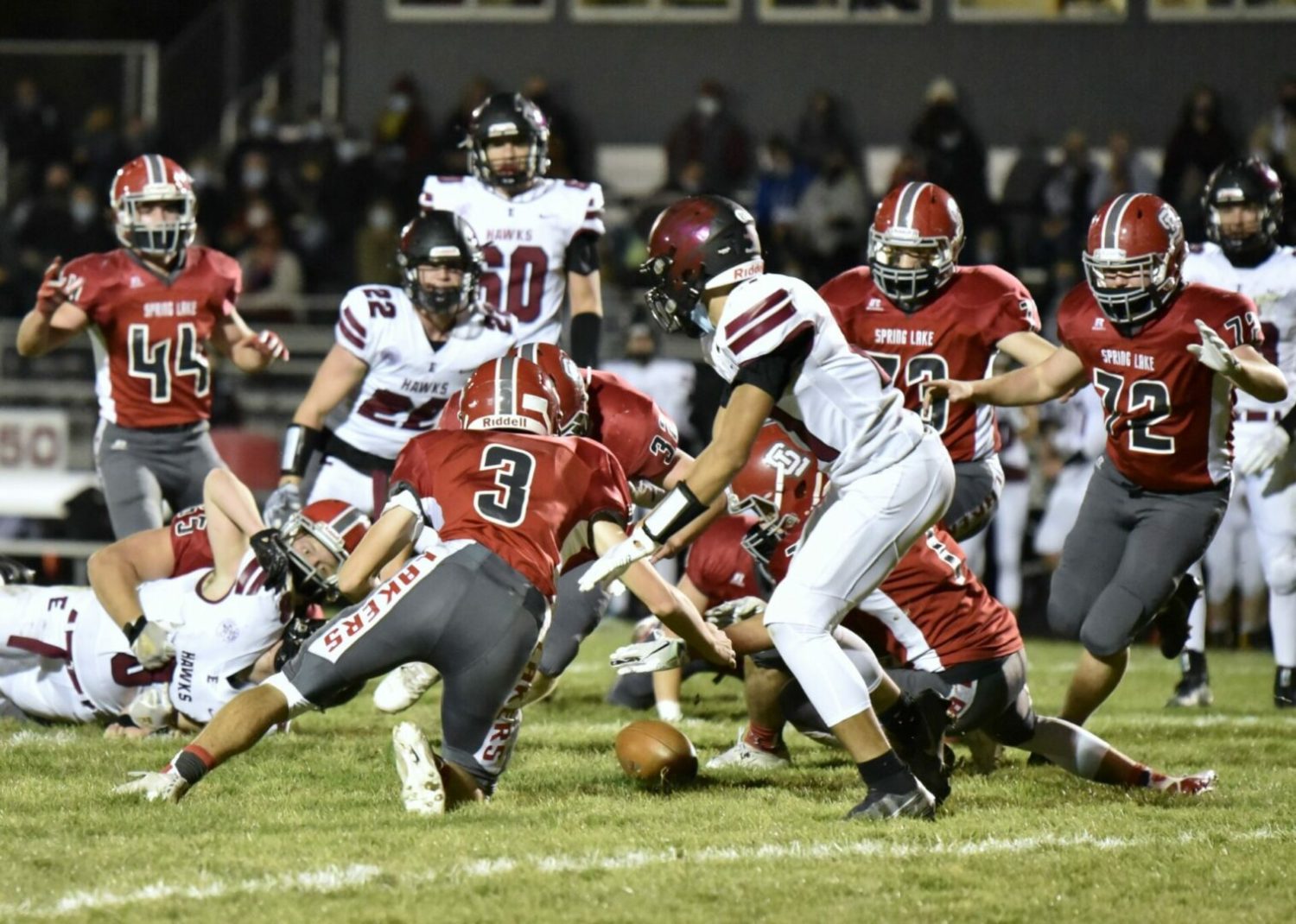 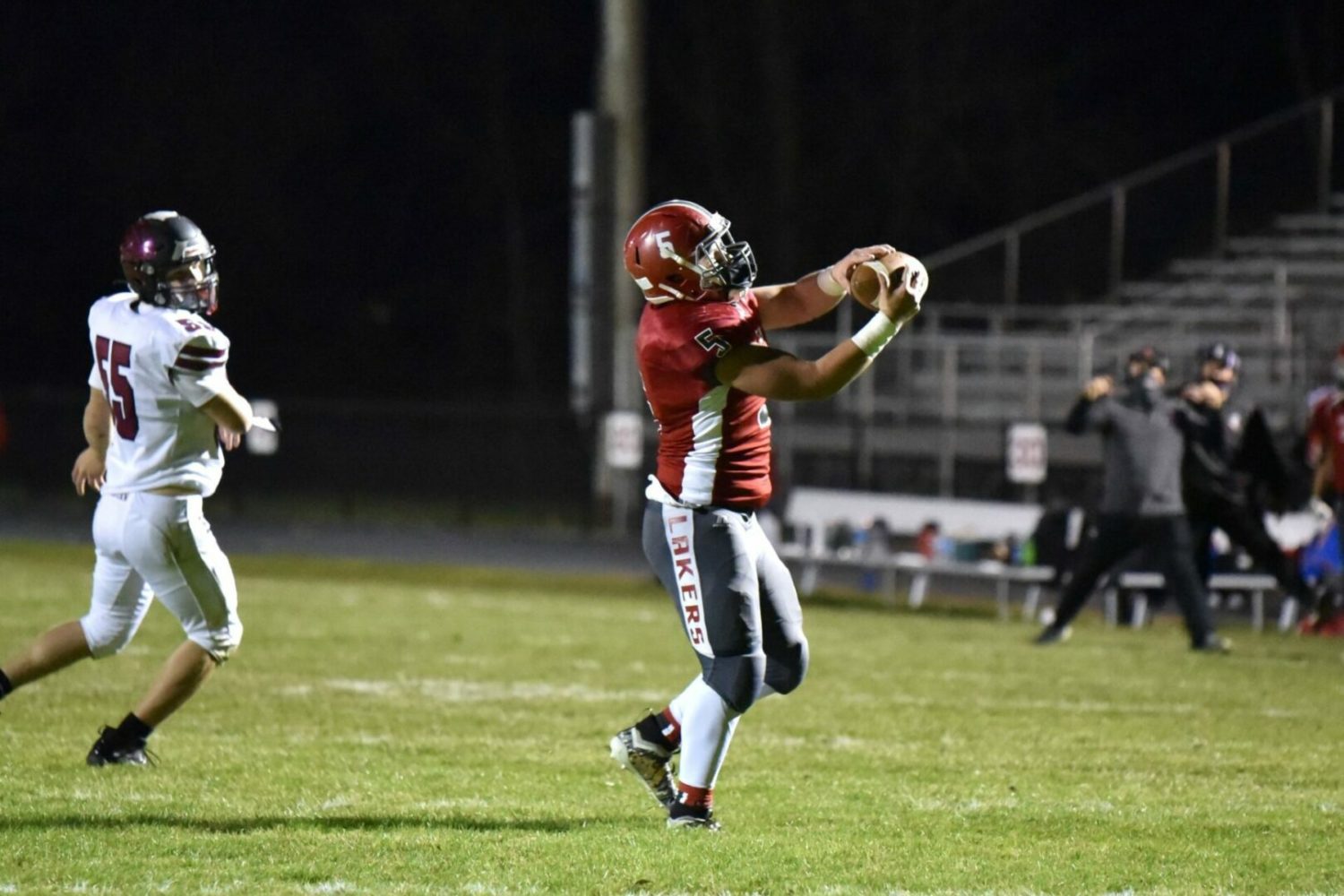 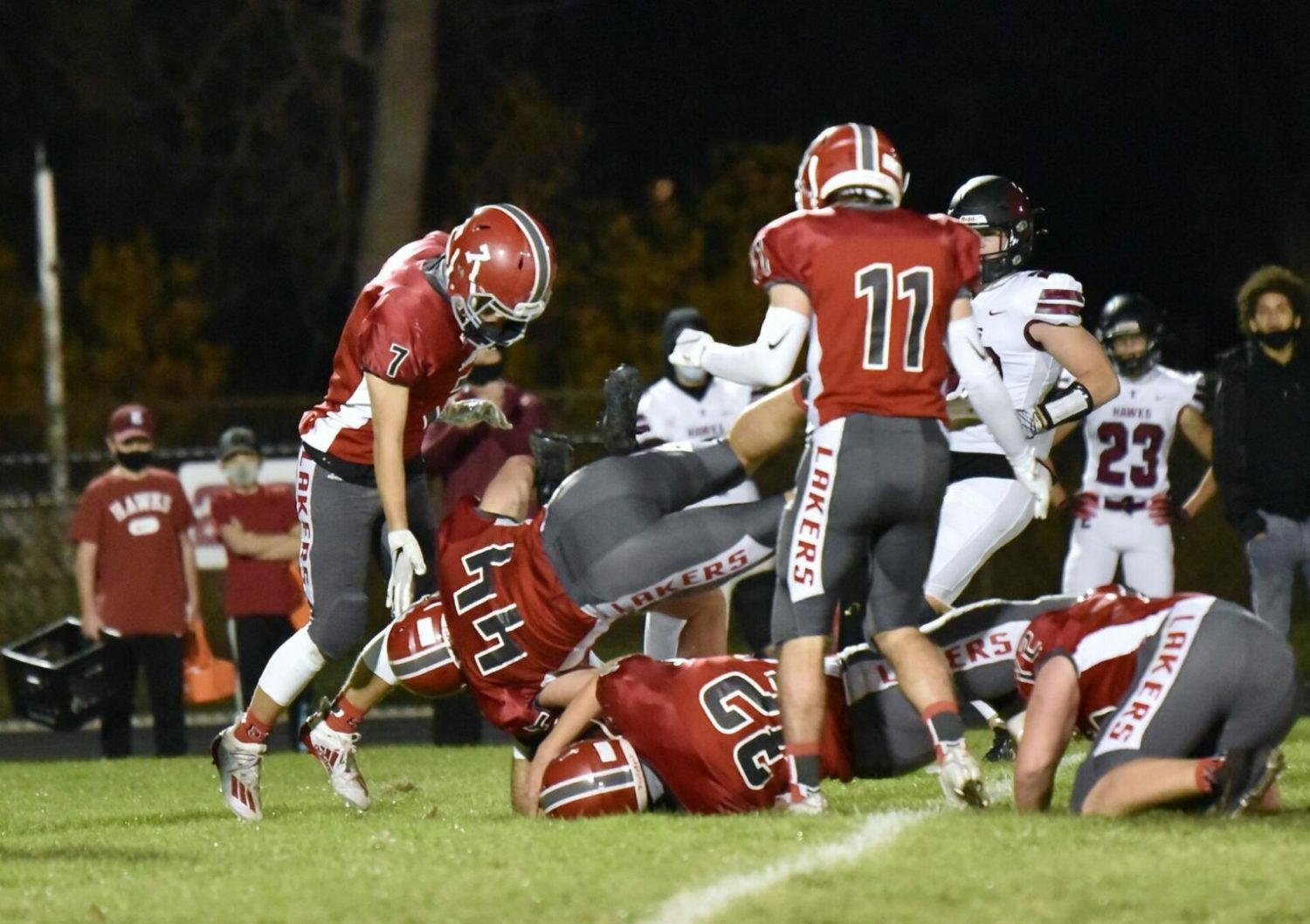 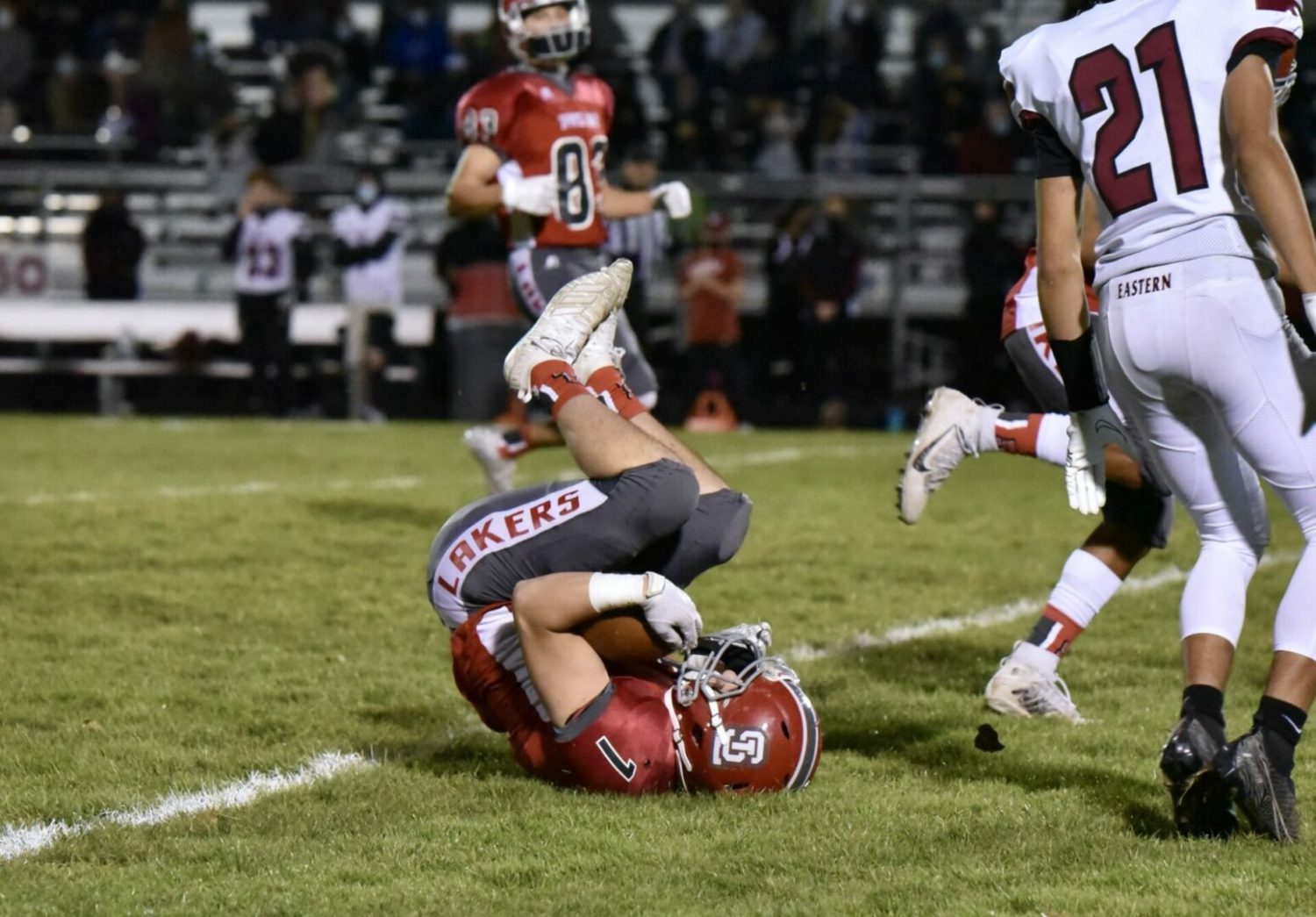 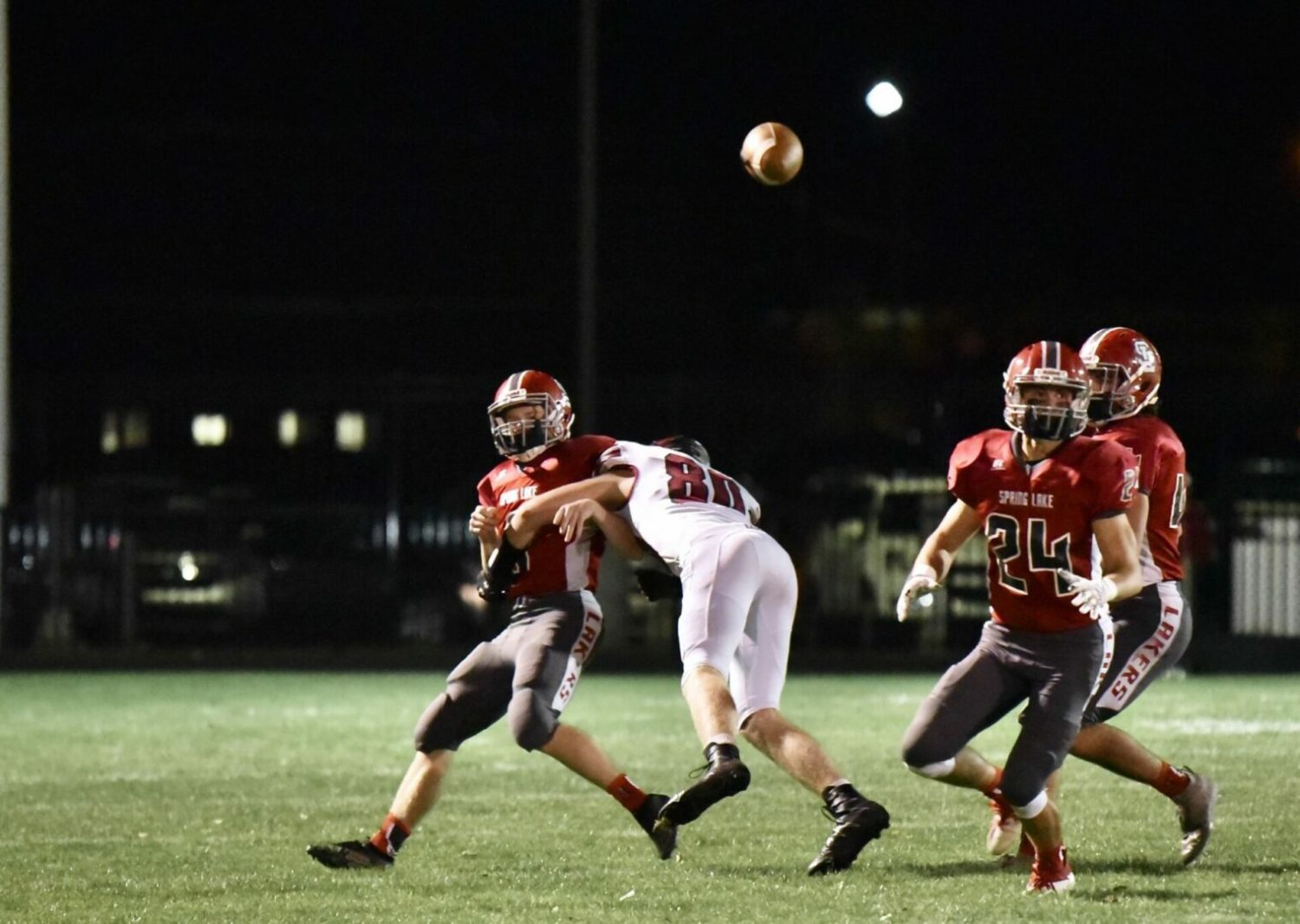 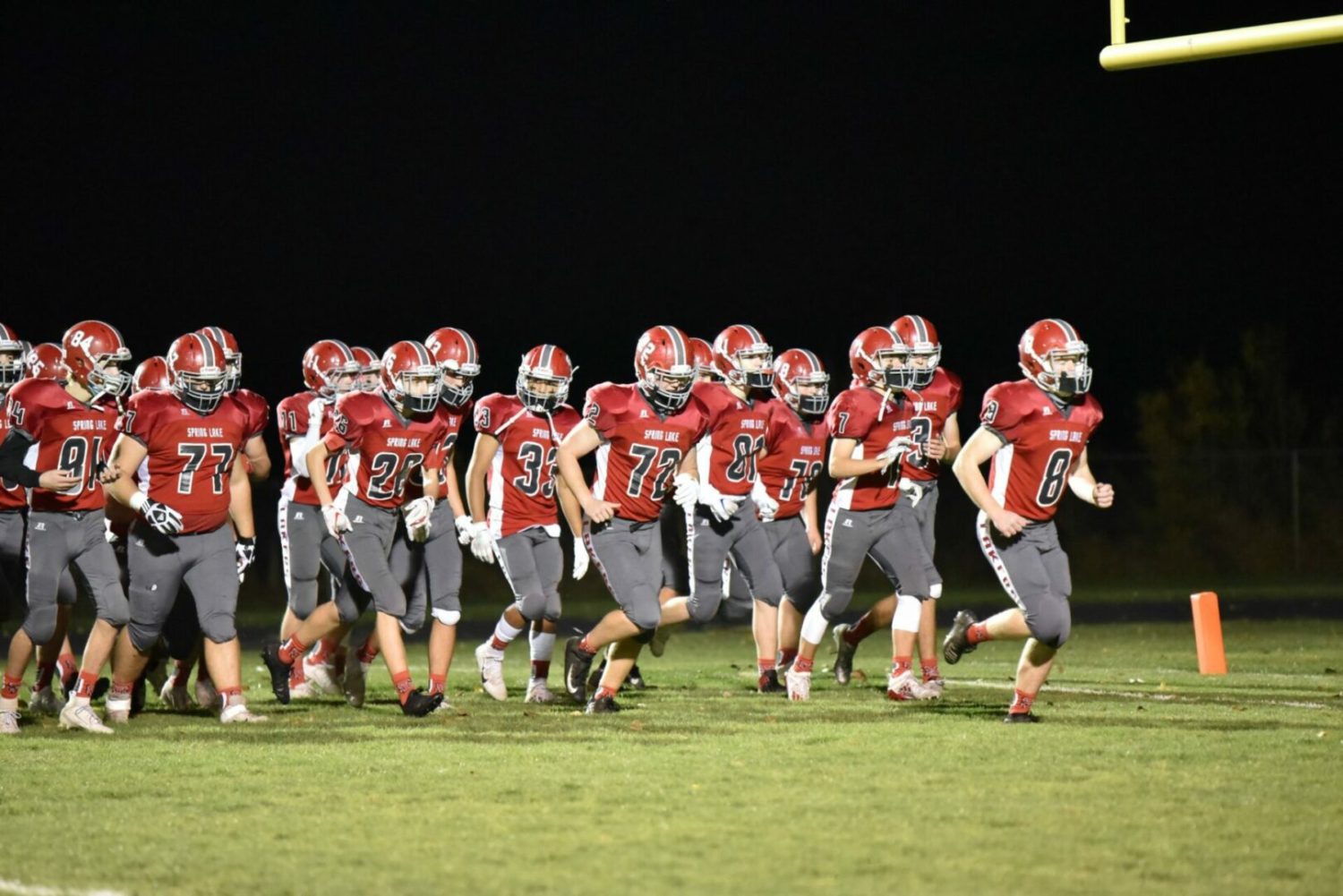 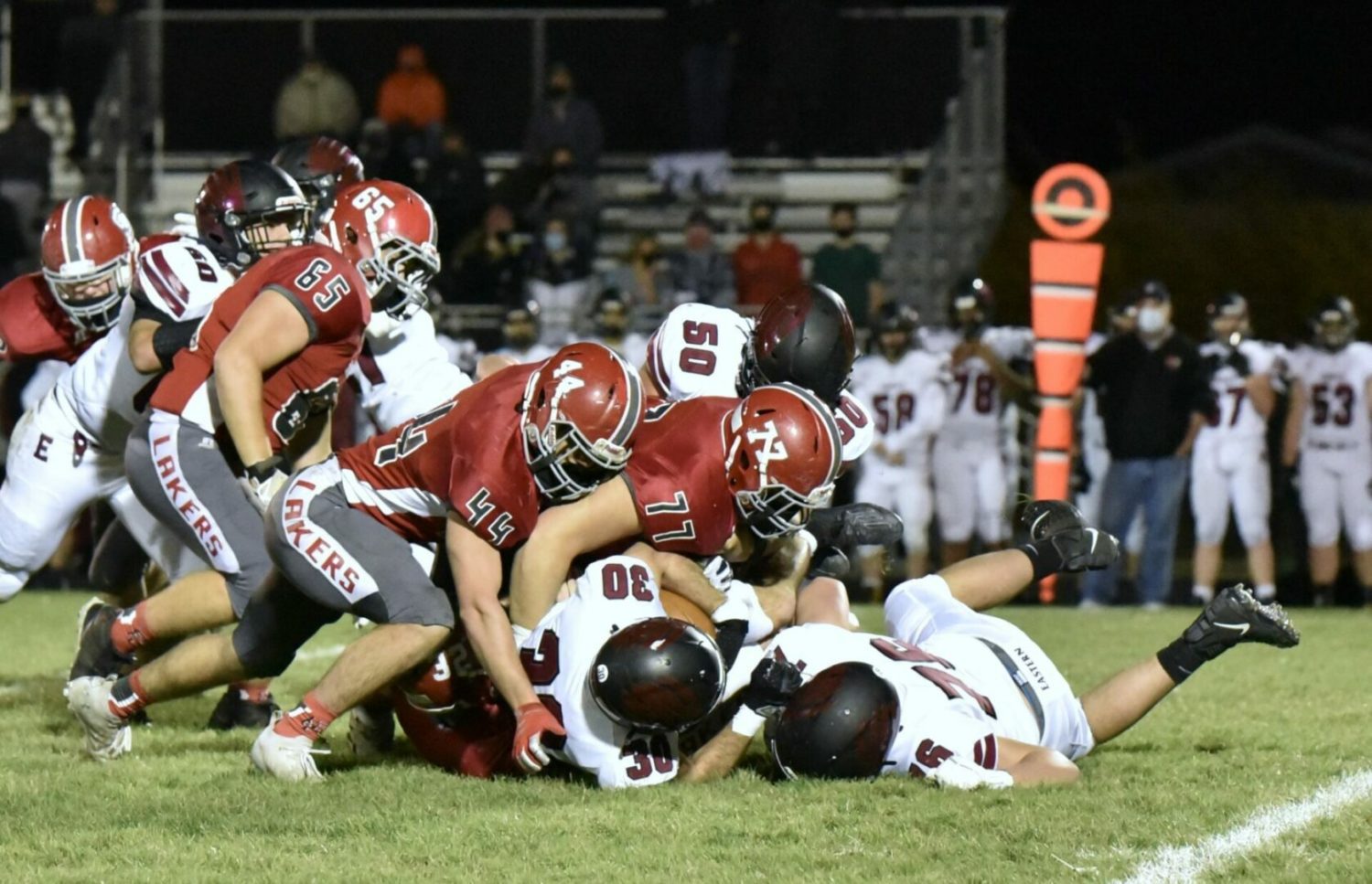 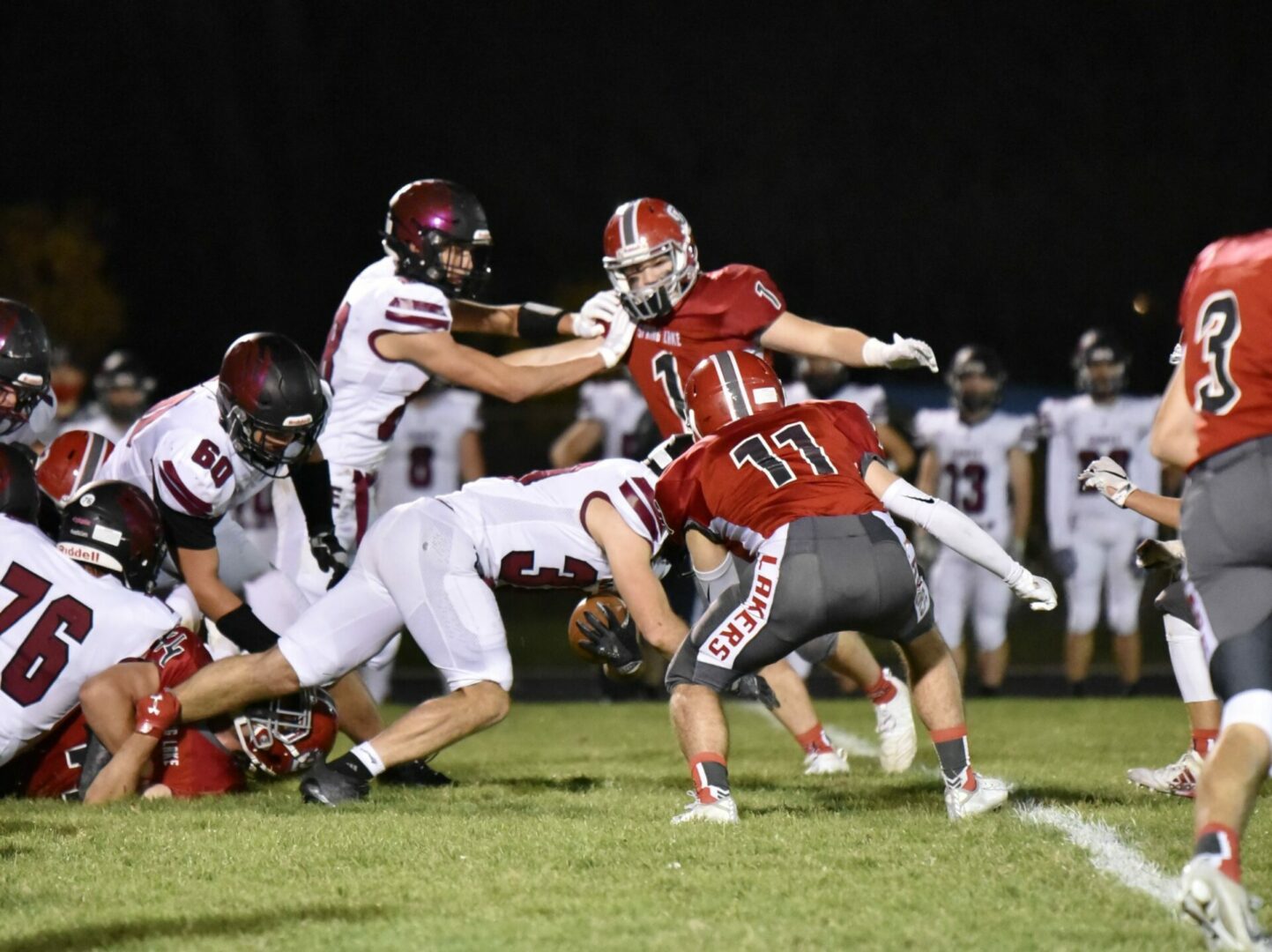 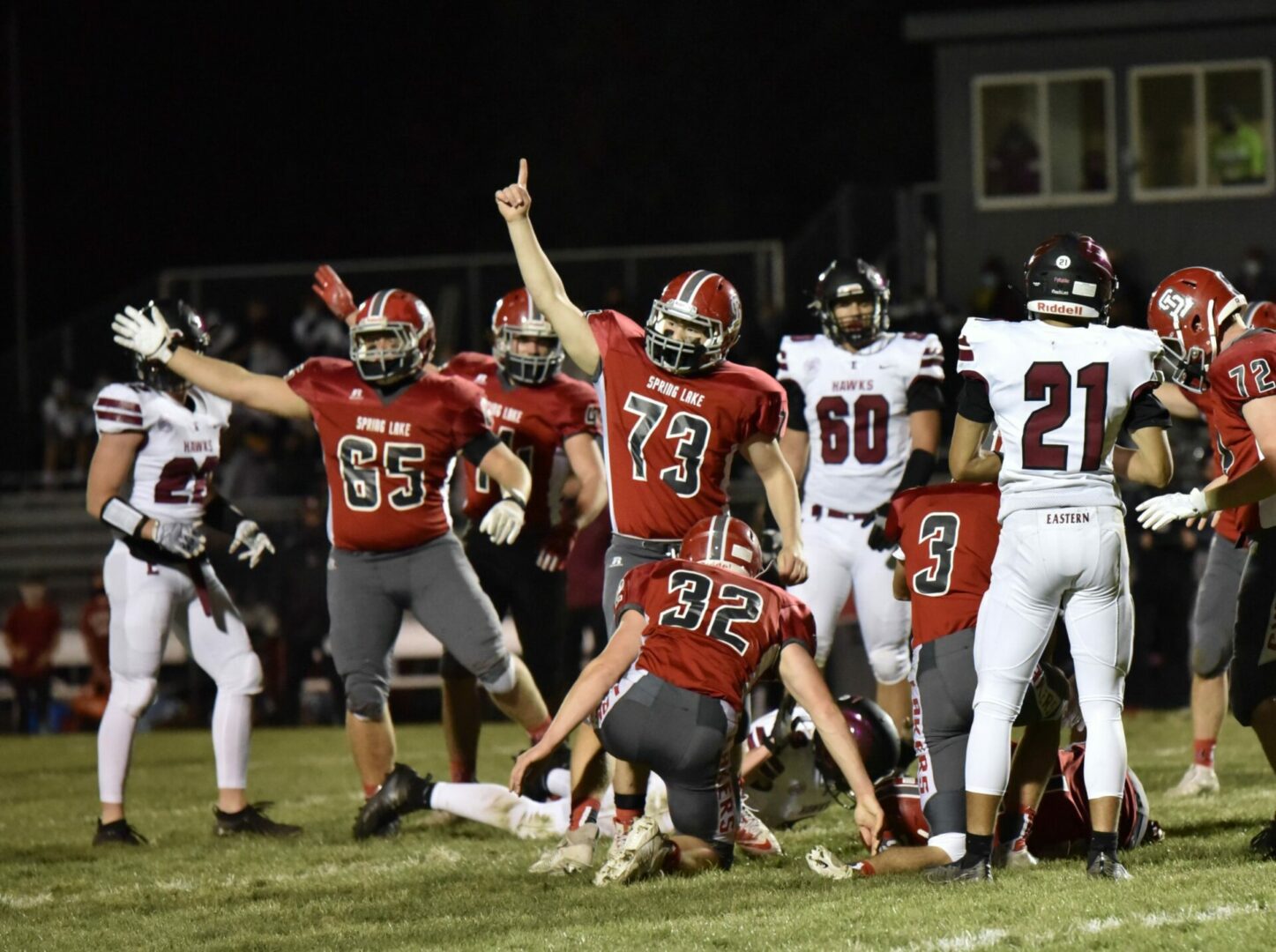 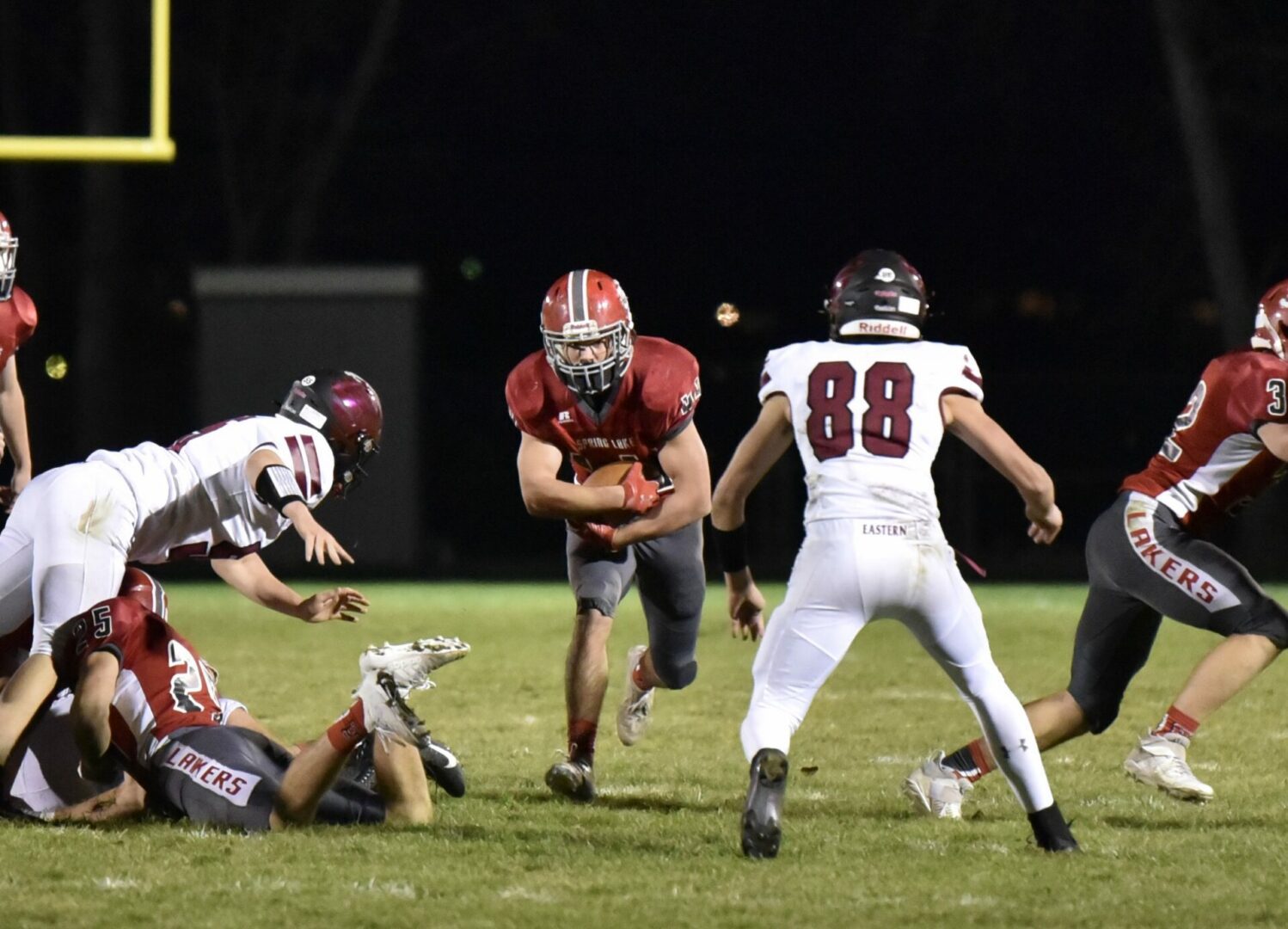 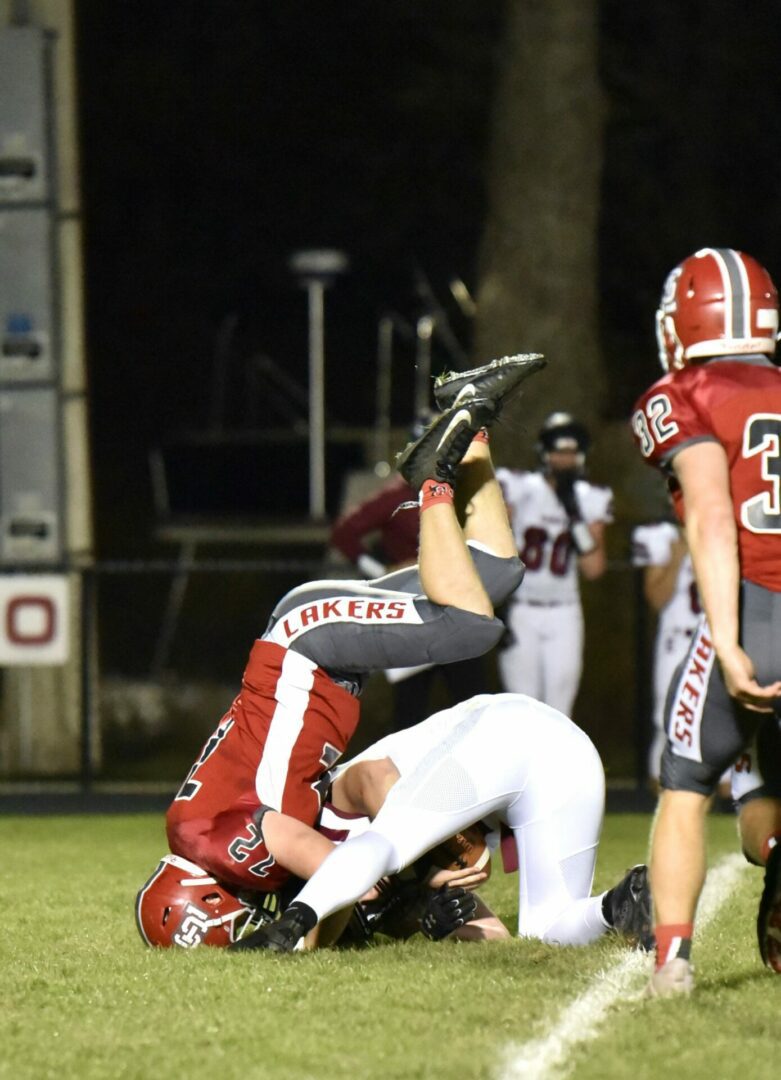 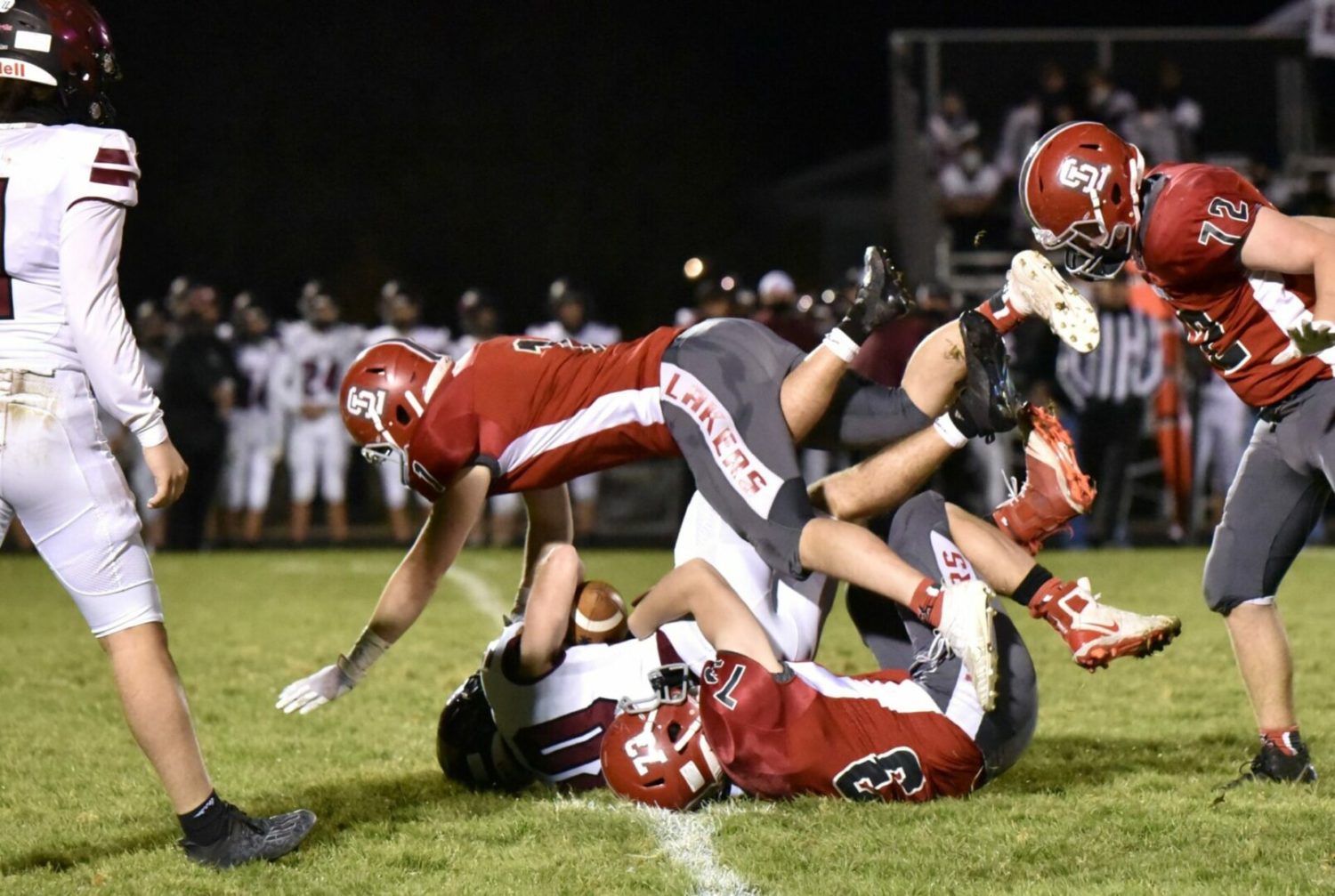 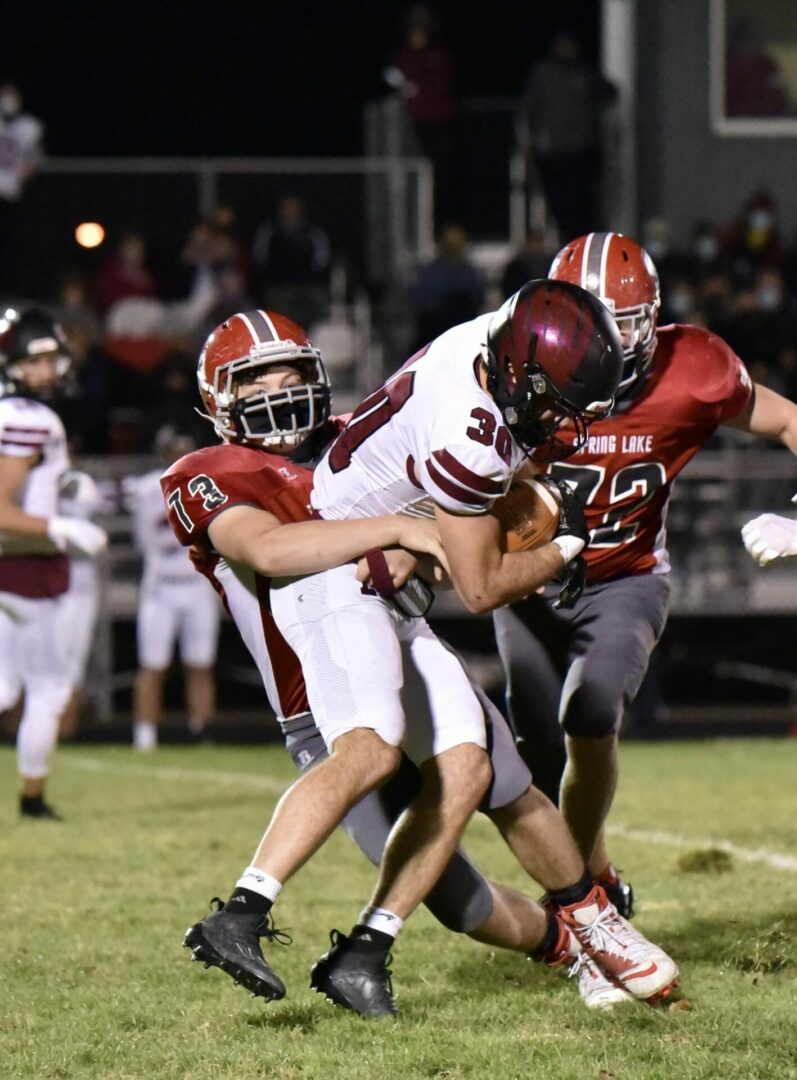 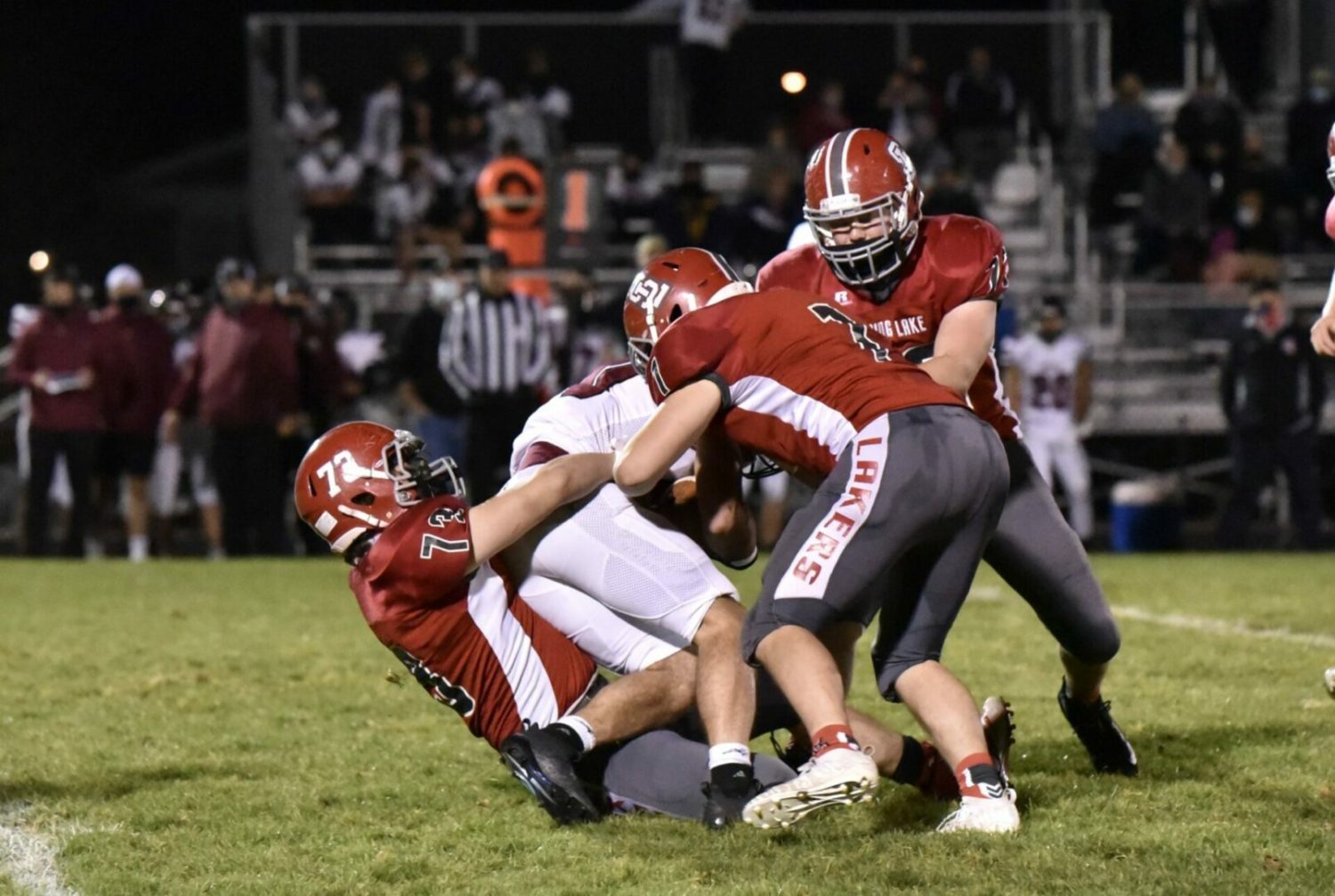 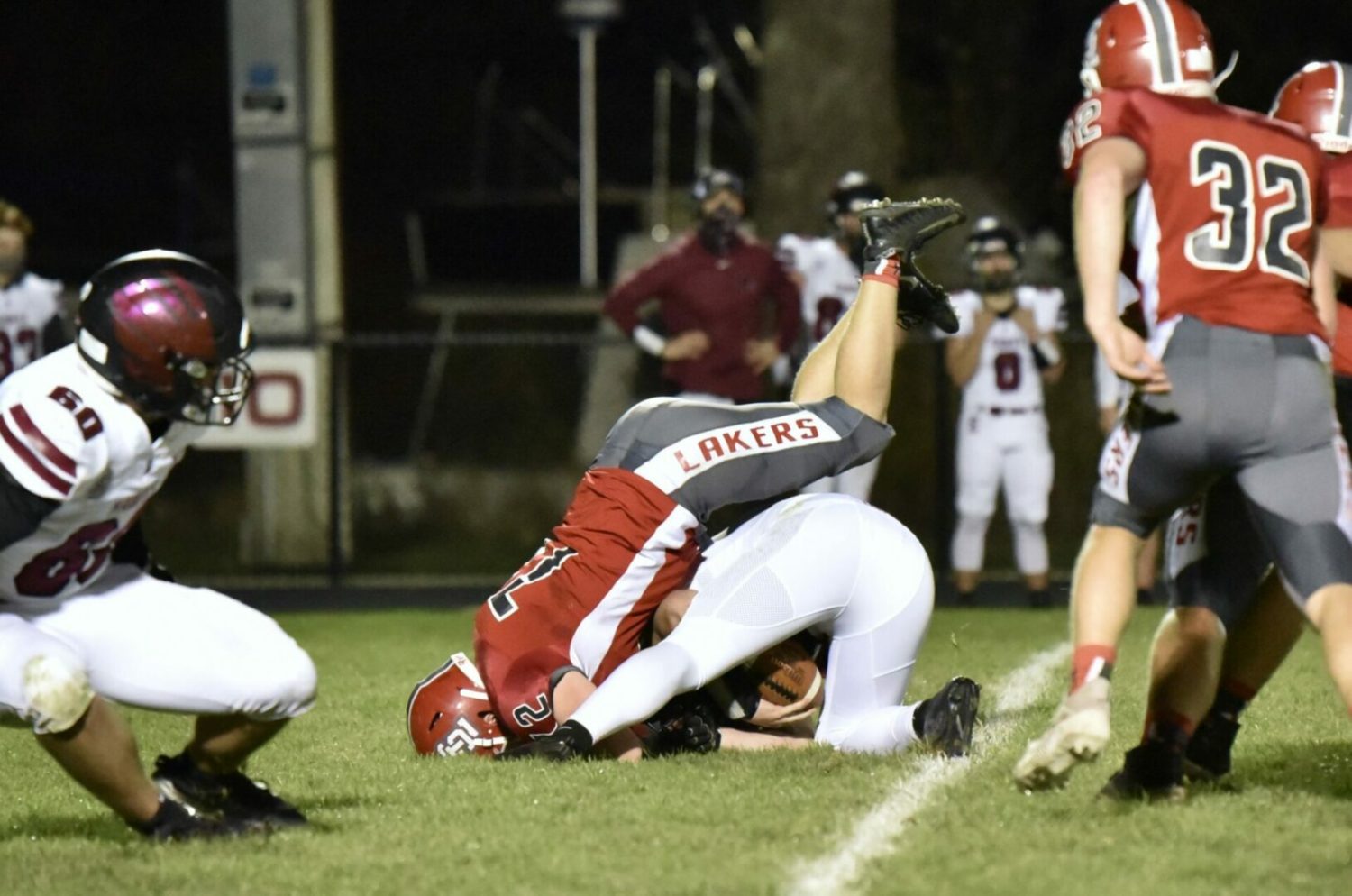 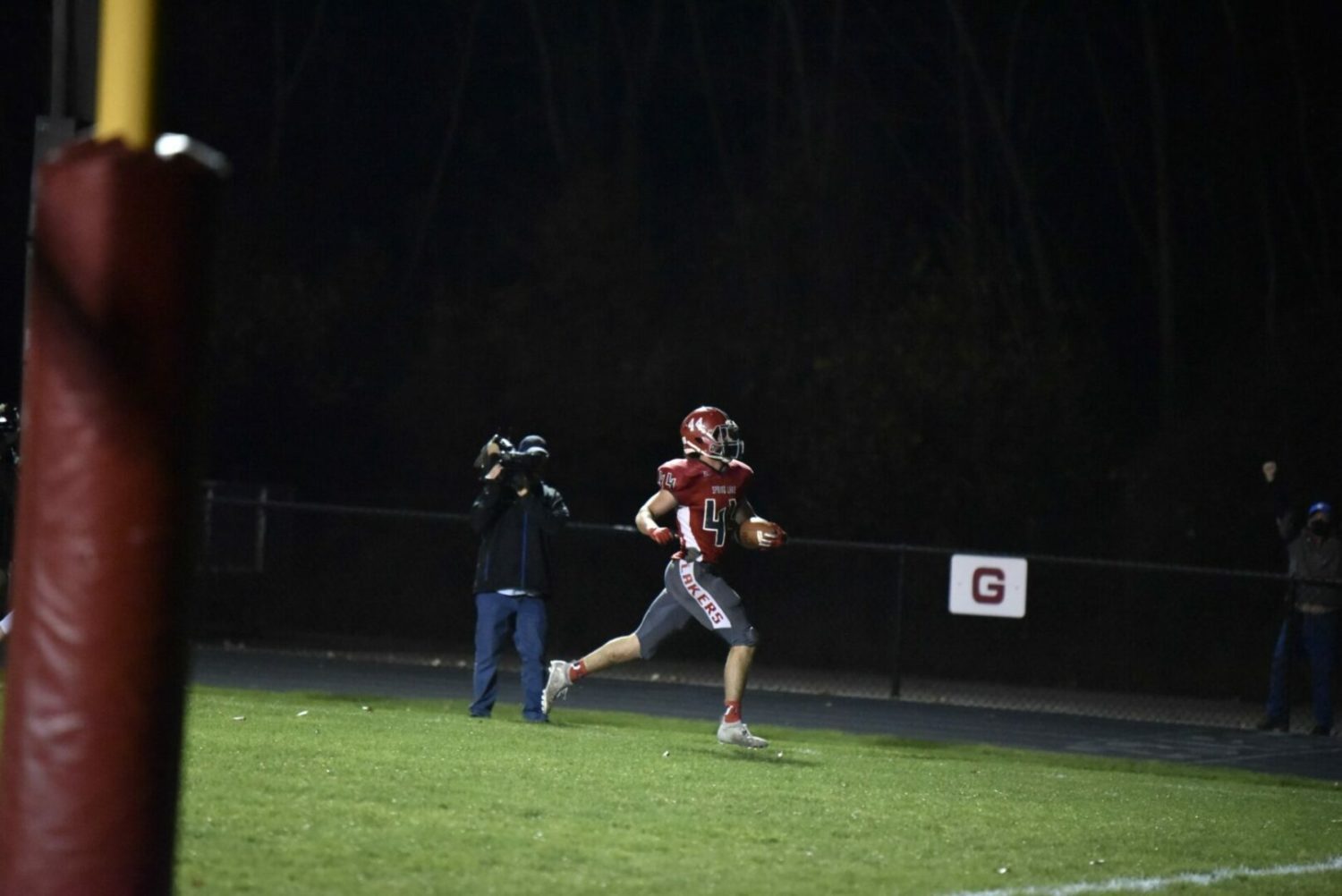