MU8KEGON – Not too many talented high school running backs have to spend two seasons mostly on the bench, waiting for their chance to crack the lineup.

That type of situation is enough to challenge the maturity level of any young athlete.

Muskegon High School’s Jacarri Kitchen definitely demonstrated his maturity and dedication as he waited patiently for his turn. Now it’s paying big dividends, for Kitchen and the Big Reds. 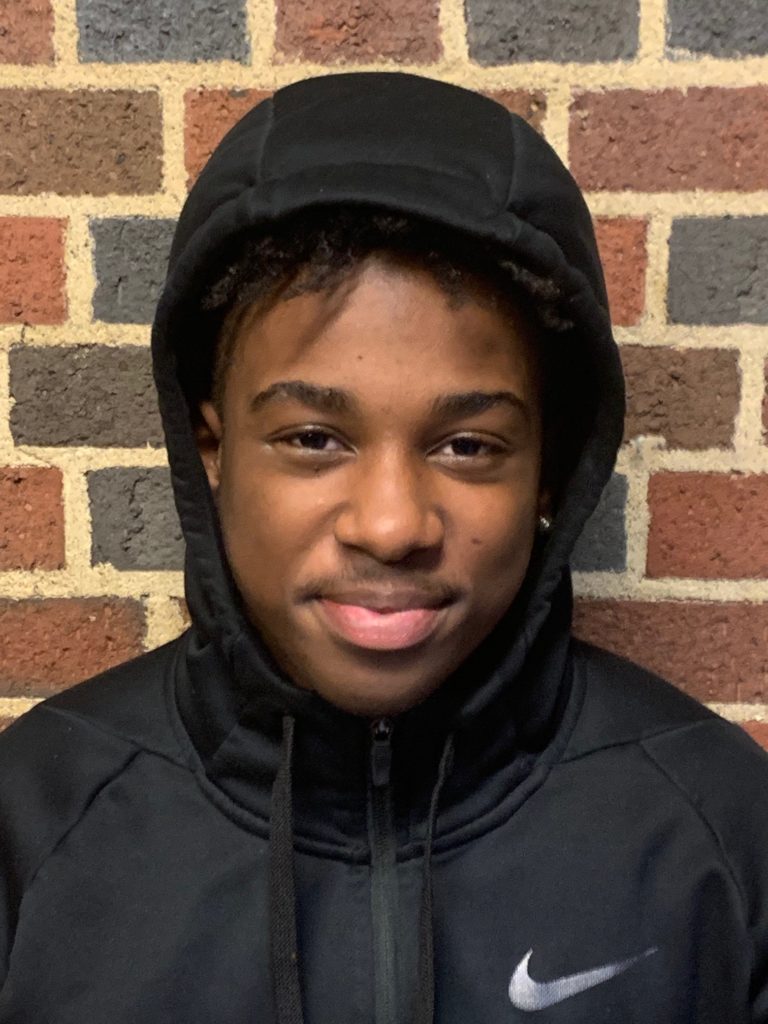 Kitchen, a senior running back, passed the 1,000 yard rushing mark for the season last Saturday in Muskegon’s impressive 24-0 victory over East Grand Rapids in the Division 3 regional finals.

Now he and his teammates are preparing to travel to play DeWitt this Saturday in the state semifinals, with a chance to earn Muskegon’s fifth straight berth in the state championship game.

Kitchen has been present for two state title games for the Big Reds, but did not see much game action. He is counting on a third chance, when he would definitely be one of the main guys on the field.

As a sophomore, he had just transferred to Muskegon after living with his father for a year in North Carolina, and was prevented from playing by state rules.

“My dad was always in my ear that season, telling me it was a minor setback for a major comeback,” said Kitchen, who now has 1,098 yards on 97 carries this season, with eight touchdown runs. “He said I had that time out to work on my craft. So every day I would go home from school and work on my footwork and other things. I knew I would get my chance.”

He became eligible to play as a junior in 2019, but still saw relatively little game time, because he was the second-string running back behind senior starter Tommy Watts.

The backup role was difficult for Kitchen, because he had started as a freshman for his high school in Mebane, North Carolina. He also knew that at just about any other school in the area, he would be playing virtually every down.

But he still remained patient, and was happy for the opportunities he received. He was excited about the role he played in a 2019 playoff game against East Grand Rapids. He only gained 15 yards, but all of those came on one run. He also had a big block to help spring standout quarterback Cameron Martinez loose to score a touchdown. 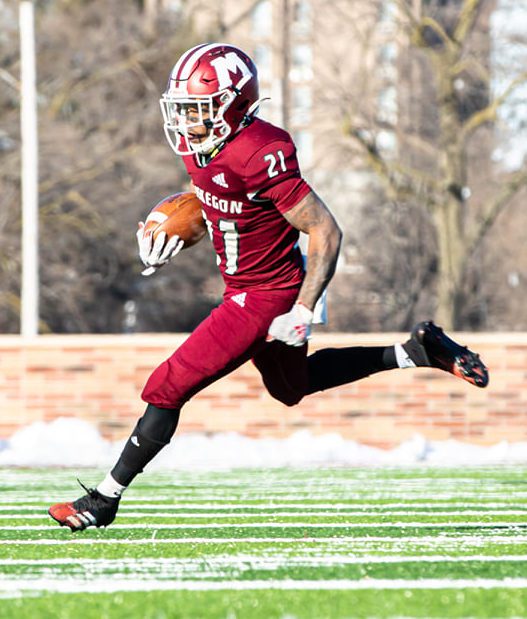 “I still knew I would get my chance,” said Kitchen, who actually went to Mona Shores before moving to North Carolina for a year as a freshman. “Against East Grand Rapids I had a block and a big run. Tommy had got hurt, and Coach Fairfield told me it was time to show what No. 21 was all about.”

Kitchen really showed off his talent when he inherited the starting job this fall.

Kitchen really turned on the burners in the district finals against Marquette on Nov. 14, gaining 217 yards on 25 carries. The next day the season was postponed due to the COVID flare-up, and there were no more games until last Saturday.

It would have been reasonable to expect Kitchen and the Big Reds to be rusty after so many weeks off, but that certainly was not the case. Kitchen had another big day against East Grand Rapids, rushing for 120 yards on 12 carries in the impressive victory.

“I had watched film and I knew that (East Grand Rapids) had trouble against shifty backs, so I knew I could use my feet and my speed to my advantage,” he said.

Now everybody knows what Kitchen is capable of when he carries the ball. He had to prove himself, but that was nothing new, because as an undersized 5 foot, 7 inch, 165-pound running back, coaches throughout the years have initially doubted his abilities. 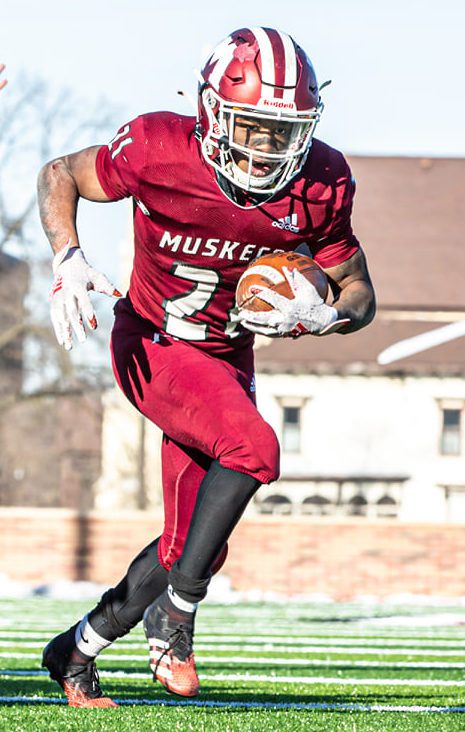 Jacarri Kitchen gets ready to enter the end zone for Muskegon during the Big Reds’ win over EGR. Photo/Tim Reilly

“My dad always told me, they always look at the bigger guy first, so you have to stand out,” Kitchen said.. “You have to show them why they should pick you. He always said that every day you have to play like you’re at the next level.”

For the Big Reds, the emergence of a 1,000 yard running back has added another wrinkle to their already potent offensive attack. For the past few years, the top rusher for Muskegon has been the quarterback – the fast and elusive Ladarius Jefferson, who now plays at Western Michigan University, followed by Martinez, now an Ohio State Buckeye.

The current quarterback, Amari Crowley, is also very fast, along with guys like Myles Walton, Damari Foster, Tyreese Oakes and others who sometimes carry the ball. And Crowley’s passing game is definitely coming along, as evidenced by his 11-for-13, 157-yard performance last Saturday, when he threw two touchdown strikes to leading receiver Jeremiah Dault.

Having an explosive first-string running back like Kitchen, on top of all that, makes the Big Reds extra dangerous.

“He’s very explosive, very fast,” Muskegon Coach Shane Fairfield said about Kitchen. “We are very proud of his growth, and the responsibility he’s taken on as a huge part of the offense. He’s now very trustworthy hanging on to the ball. Last year he had a few drops. He’s better at ball security, and he catches the ball out of the backfield.”

Fairfield said Kitchen has shown patience and maturity while waiting for his turn to crack the starting lineup.

“He always had to compete with Watts, in track and in football,” the coach said. “In track, I think they were one and two in the city in the hundred. On the football field they were one and two. Like all of our kids, he could have had a bigger role earlier, but he made the best of everything he’s had. I think there’s a whole other side to him you’re going to see as he moves on to his college career.”