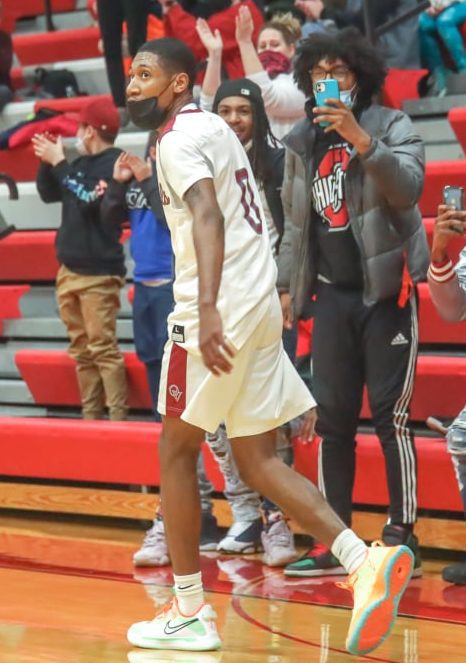 Ke’Ontae Barnes looks up at the scoreboard after hitting his record-breaking shot for OV. Photo/Joe Lane

The Cardinals are now 13-0 on the season with the victory.

NORTH MUSKEGON 47, HOLTON 40-The Norse came from behind to pick up a non-conference victory over the Red Devils on Monday night.

Troy McManus led the charge for the Norse, with 16 points and the go ahead three in the fourth quarter. Brennan McManus scored 12 points, while Denny Belemonte scored nine points.

The Red Devils were led by Aidan Poling with 13 points, while Wyatt Monnette finished the evening with 12 points.

The Norse improve to 5-5 overall, while the Red Devils fall to 10-3 overall.

OV’s No. 0 Ke’Ontae Barnes is congratulated by his teammates after breaking the Cardinals’ all-time scoring record. Photo/Joe Lane

OAKRIDGE 56, SHELBY 47 – Oakridge jumped out to a 15-8 first quarter lead on Monday night and never looked back, picking up a conference victory.

Garrett Weaver led the Eagles with 15 points and five assists on the night.

Shelby was paced by Logan Claeys with 16 points on the night.

LAKEVIEW 64, HESPERIA 39-The Panthers fell to the Wildcats in CSAA Silver conference play on Monday night. 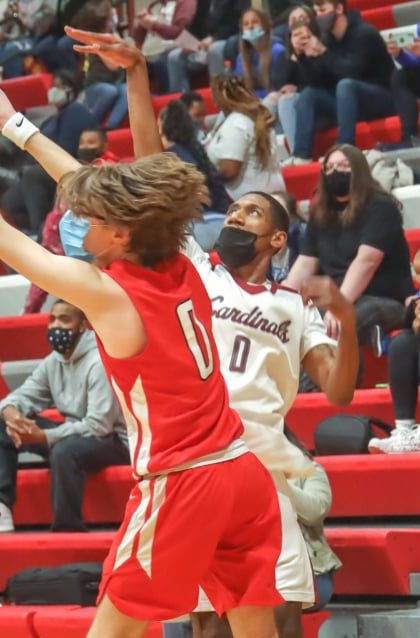 Barnes Follows through on the shot that broke the OV scoring record. Photo/Joe Lane

The Vikings jumped out to a 16-12 lead after the first and led 34-23 at halftime. The Vikings extended the lead to 59-37 after three quarters.

The Vikings also received contributions from Andrew Durbin who finished with 12 points and 10 rebounds, while Evan Mikkelson recorded 11 points.

The Bulldogs were paced by Grant Becklin with 13 points while Joel Emery scored 10 and Dom Jones recorded nine points.

The Vikings improve to 9-3 overall, and 8-0 in conference play while the Bulldogs fall to 7-3 overall.

LUDINGTON 67 FREMONT 53-The Orioles picked up a non conference victory over the Packers on Monday night.

The Orioles led 18-12 after the first quarter and 32-22 at halftime. The Orioles extended the lead to 55-27 after three quarters. 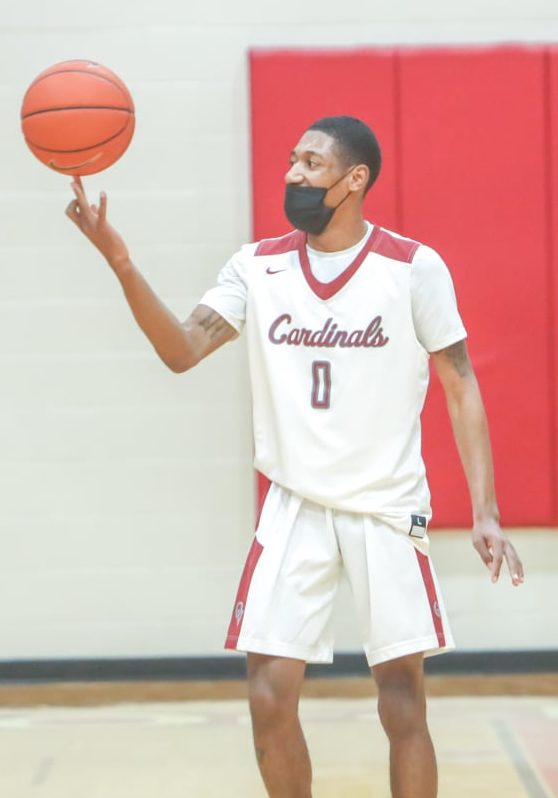 The Eagles led 13-11 after one quarter of play, but the Falcons took a 25-20 lead after two quarters. The two teams battled to a 40-40 tie at the end of three quarters.

Hoffman finished the game with 24 points, 17 rebounds, and 10 blocks. Blake Brigindahl chipped in with 12 points.

The Eagles were led by Braden Cohea with 18 points, while Bradley Richards finished with 15 points.

The Falcons improve to 6-2 overall and remain 3-2 in conference play. The Eagles fall to 5-6 overall.