NORTON SHORES – Orchard View’s baseball team was hungry for its first win of the season.

So the Cardinals didn’t waste any time in Thursday’s game against Lakes 8 rival Western Michigan Christian, jumping out to a big early lead that propelled them to an 11-5 victory.

The win puts OV’s overall record at 1-4 on the season. 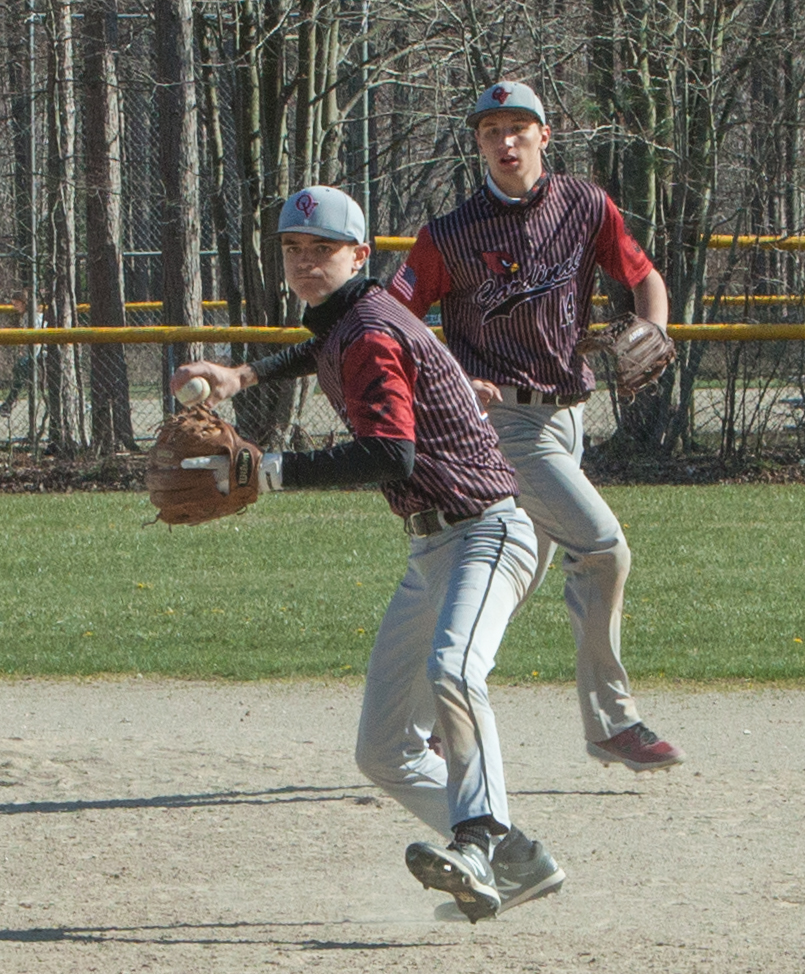 OV’s Eli Luce pulls back to make a throw from second base as No. 14 Owen Swanson watches. Photo/Jason Goorman

“It was really important for us to just breathe and get that first win,” said OV Coach Derik Morehouse. “Because we are inexperienced, getting that first win right now is big for our confidence.”

The Cardinals went to work in the first inning, bringing eight hitters to the plate and scoring two runs, while also stealing three bases in the frame. They also got good pitching right away, with freshman Noah Smith retiring the Warriors 1-2-3 in the bottom half.

In the second inning, the Cardinals really took off. They got the bases loaded with one out, chasing WMC’s starting pitcher, before Owen Swanson, Connor Kennedy, and Zach Peterson all drew RBI walks. Following another WMC pitching change, Korbin Douglas and Brendan Hyatt each hit RBI singles before Korbin Tenbrink got an RBI groundout to push the lead to 8-0 before the top of the second inning was over. 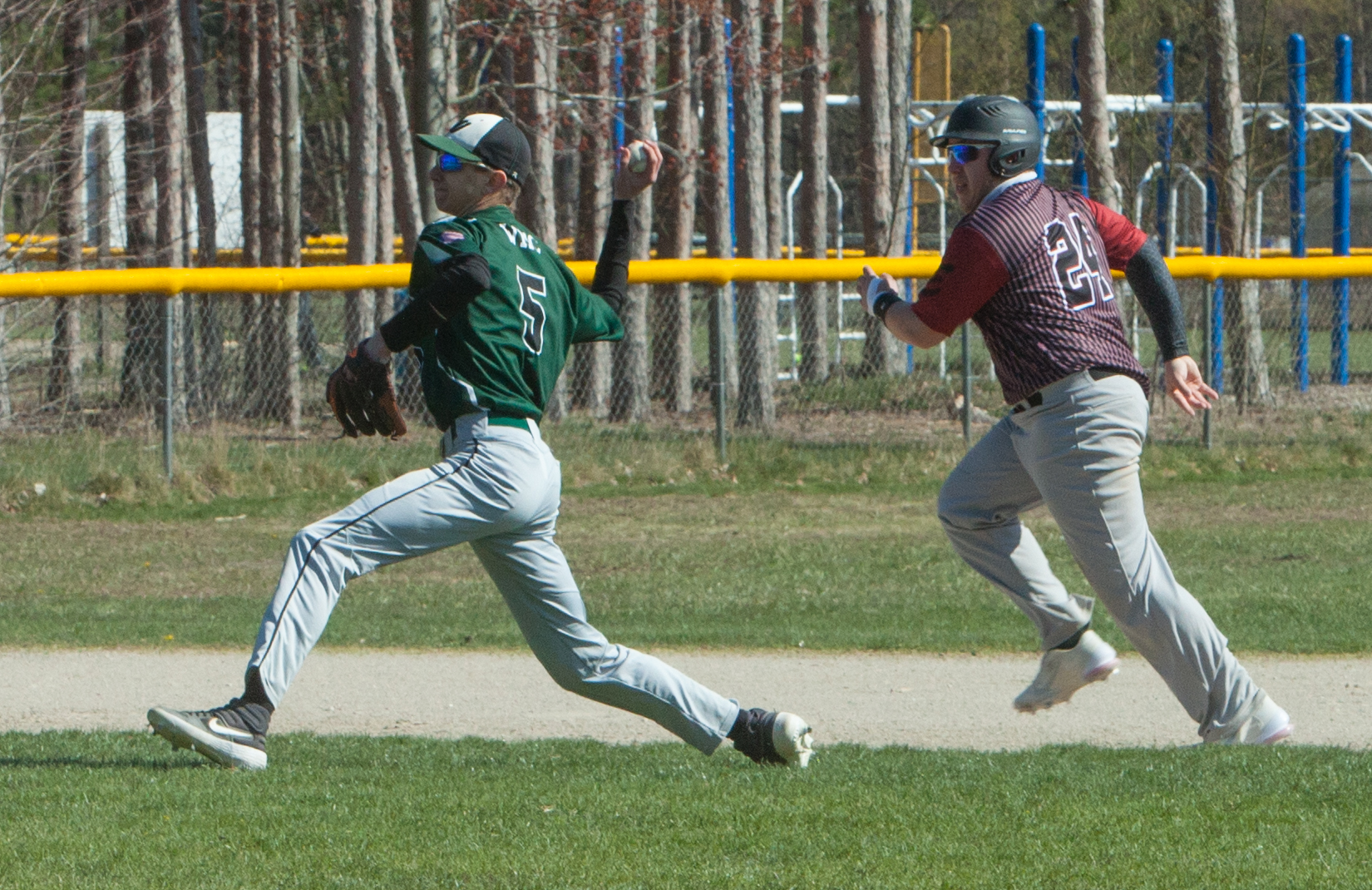 Micah Terhaar tries to make a play at home as OV’s No. 24 Connor Kennedy advances to third. Photo/Jason Goorman

“I’m really impressed with the poise they kept out there,” Morehouse said.

In the bottom of the second, Smith once again retired the side in order, and after two innings OV held an 8-0 lead.

Orchard View stayed hot in the top of the third, drawing two walks as well as having a runner reach on an error, leaving the bases loaded with no outs. Peterson hit another RBI single while another runner came in on a passed ball.

WMC broke the potential no-hit bid in the third inning with a bloop single and managed to get runners on the corners, but Smith pitched out of the jam.

In the bottom of the fourth inning, WMC got to Smith, getting two extra-base hits followed by two straight singles and a wild pitch to make the score 10-4 and breaking the freshman’s attempt at a shutout. The Warriors had four stolen bases that inning, but the Cardinals remained focused on getting the safe outs.

“At that point in the game, just getting outs is the most important thing,” Morehead mentioned “We knew they were going to take our force outs away, so getting the secure outs was key.”

In the bottom of the sixth, Morehead put in his closer Tenbrink, a 5’2 sophomore, who allowed one hit, but got a double play immediately afterward to squash WMC’s inning.

“Small stature, but he’s got a giant arm, and the kids respect him,” Morehead said. “It goes to show baseball is a sport that anyone can play, regardless of size.”

WMC added two runs in the seventh, but it wasn’t nearly enough and the Cardinals finally got their win.

“Our defensive communication was the best it’s been all season today, and it showed throughout.” Morehouse said.

Western Michigan Christian fell to 3-5 on the season. 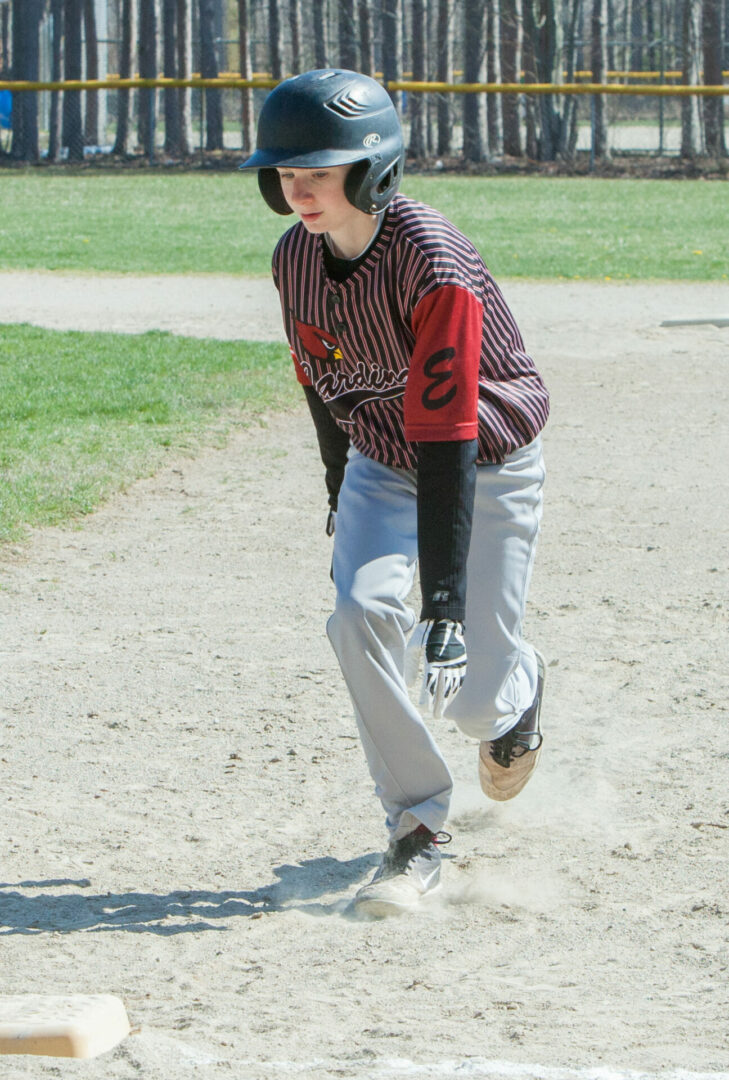 Korbin Tenbrink gets back to first for OV. Photo/Jason Goorman 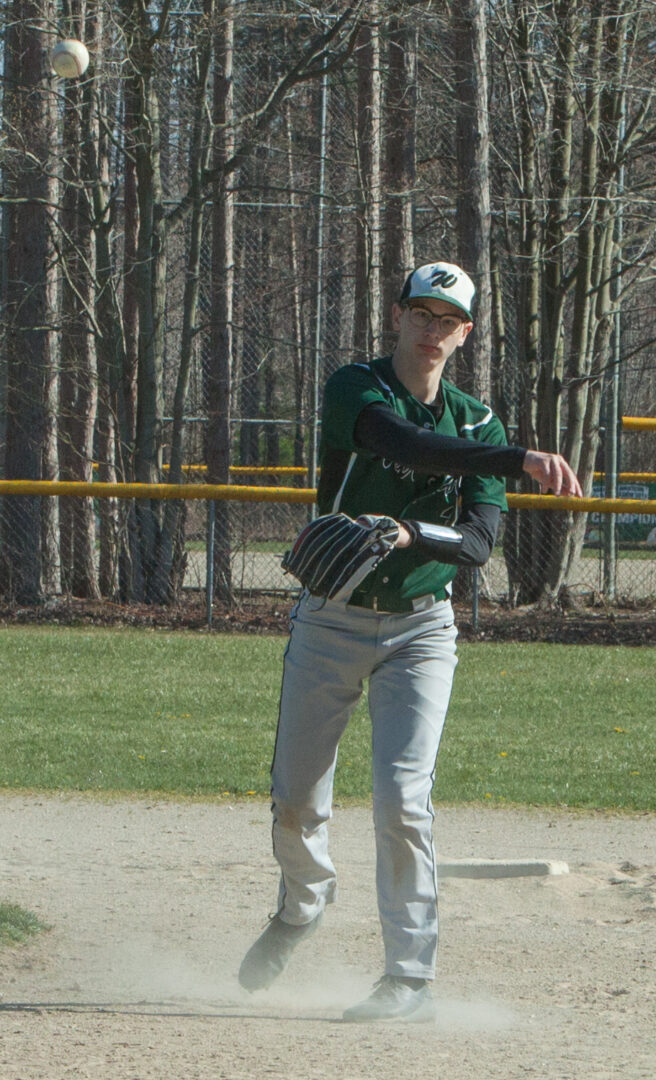 Isaac Croff makes a throw to get an out for WMC. Photo/Jason Goorman 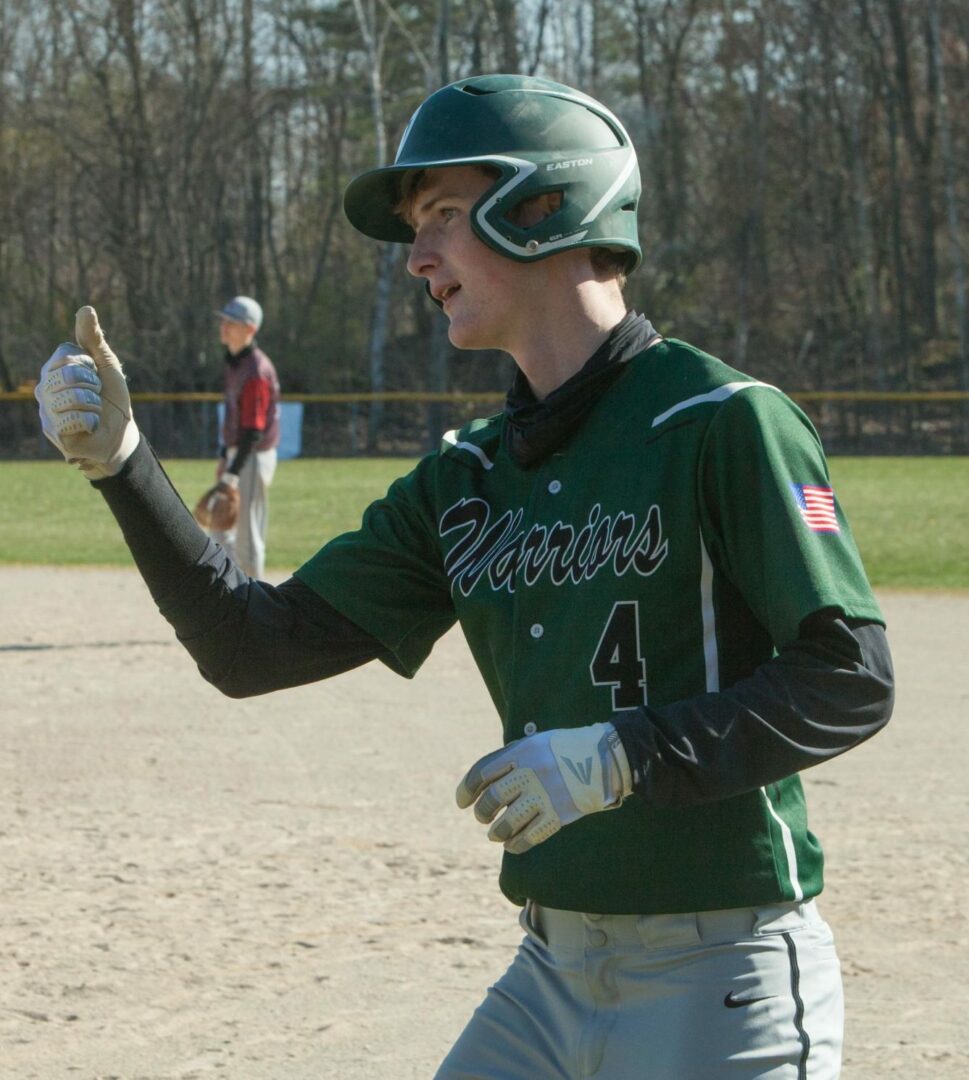 WMC’s Samuel Vanorman gets a fist bump after reaching first base for WMC. Photo/Jason Goorman