“We were superstitious,” said North Muskegon senior forward Hope Johnson, who played on both of those maddening losses. “We were in a different locker room today than we were in my freshman and sophomore years. We were like, it doesn’t matter what happened before, the third time is the charm.” 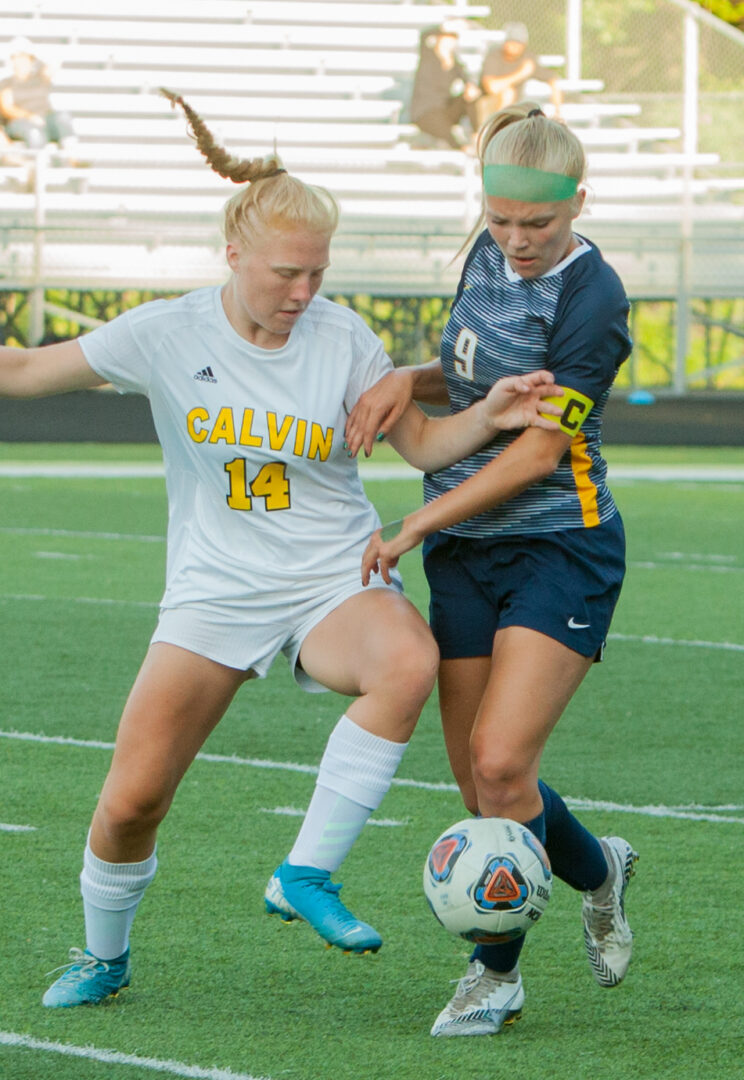 Johnson turned out to be correct. Despite their previous misfortunes in the state Final Four, the Norse took advantage of another chance on Wednesday and posted an impressive 2-0 victory over Grandville Calvin Christian in a Division 4 state semifinal at Comstock Park.

North Muskegon, now 19-1-1 on the season, will face Royal Oak Shrine Catholic on Saturday at 1 p.m. in the state championship game at Michigan State University.

While the semifinals were familiar territory for a bunch of Norse players who were in the game two years ago, it was a brand new experience for North Muskegon head coach Caleb Parnin, who is in his first year with the team and is loving every minute of the championship push.

“It feels incredible,” said Parnin, a 2003 North Muskegon graduate who recently returned to the school after teaching for 11 years at a Chicago area high school. “People have asked me all year if I’ve been nervous, or if I’ve felt pressure. But these girls wanted it so badly, and they had so much experience on this same field.”

While the outcome was a good one for North Muskegon, it remained very uncertain through the first 40 minutes of play. The Norse has plenty of opportunities to score in the first half, outshooting Calvin Christian 4-0, but the teams went to the halftime break in a 0-0 tie. 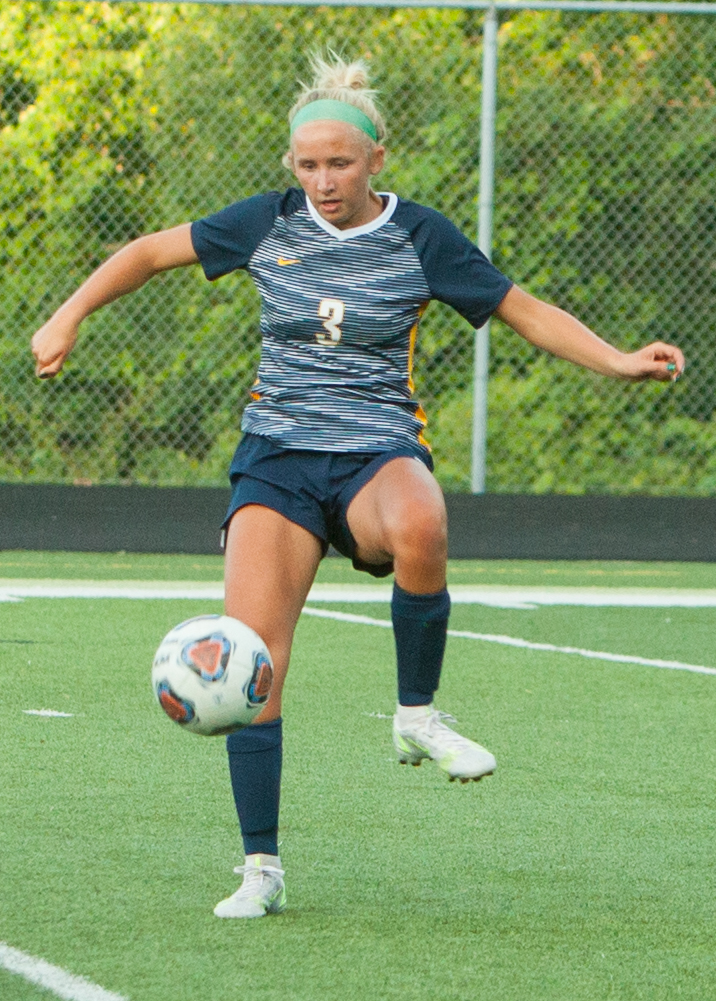 In the second half, North Muskegon sophomore Natalie Pannucci finally got her team on the board when she broke past the Squires defense and finished a breakaway goal to give the Norse a 1-0 lead with 29:58 left in the game.

“I thought I missed wide,” Pannucci said about her crucial goal. “I was like ‘Oh shoot.’ But it was crazy. All the seniors ran into my arms, and I kind of knew once we got the first goal that we would secure the next and be locked in.”

Just 1:51 later, Johnson netted a goal of her own to stretch the Norse lead to 2-0, and that’s all the padding they needed.

“We consider ourselves a second-half team,” Johnson said. “After the second goal, we knew we could lock it down and it was our game. It was the best feeling.”

Parnin said his players went back to their normal style of play in the second half, which helped them pull away.

“We kind of anticipated (Calvin Christian) playing differently than they did, so we went back to how we do things,” the coach said. “In the first half, credit them, they went harder than we did. I felt like, at halftime, we shouldn’t be getting beaten to the ball.” 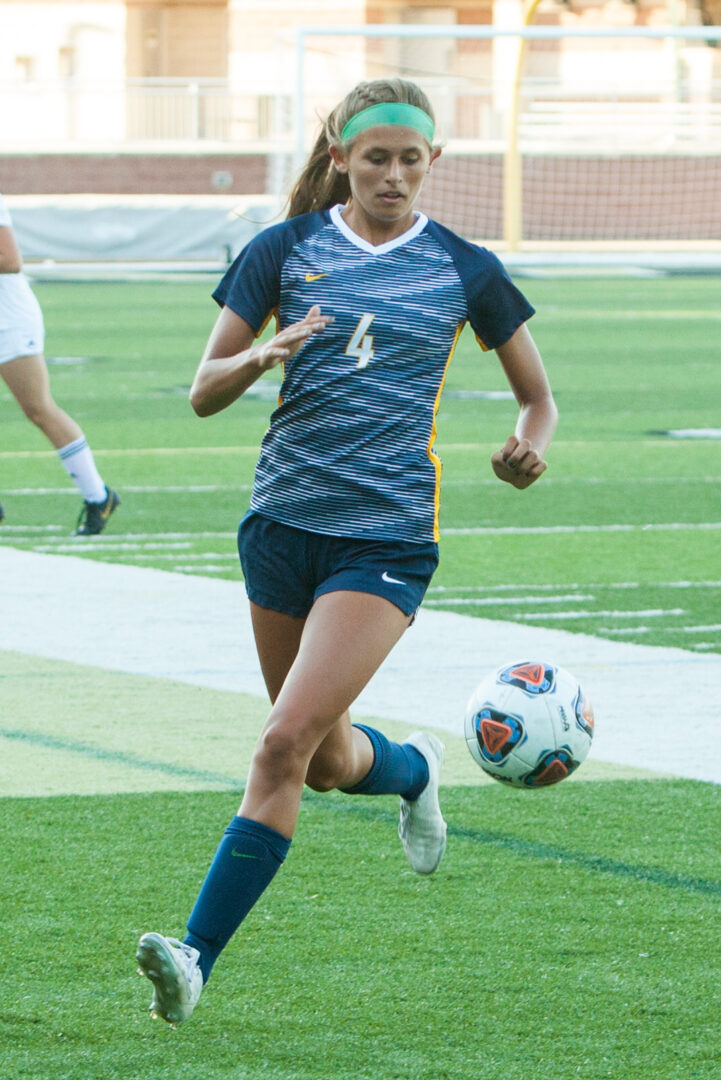 The Norse outshot the Squires 8-2 on the night, with senior goalkeeper Syann Fairfield stopping both shots she faced.

The breakthrough moment for the program wasn’t lost on Pannucci, who felt great about helping her senior teammates finally get the semifinal win that had been so difficult to secure.

“They’ve been here the last couple years, and haven’t made it past this,” she said. “So this run is really cool.”

The Norse were supported by a big crowd of fans who made the drive to Comstock Park, and Parnin said their presence was noted and very much appreciated.

“North Muskegon is home to very few people, and it was absolutely packed up there tonight,” he said. “The support that we get from the community is insane. I can’t tell you how many people this week told me they couldn’t wait for Wednesday, and they had no connection to the program.”

Whether the Norse win or lose on Saturday, they’ll be getting a banner at the high school to commemorate their great season. But Parnin is quite sure which banner his players would prefer.

“We talked at the beginning of the year that we have a spot in the gym for a banner,” the coach said. “You only get one for a state championship or runner-up, and now it’s just choosing which one, and I think I know which one the girls want.” 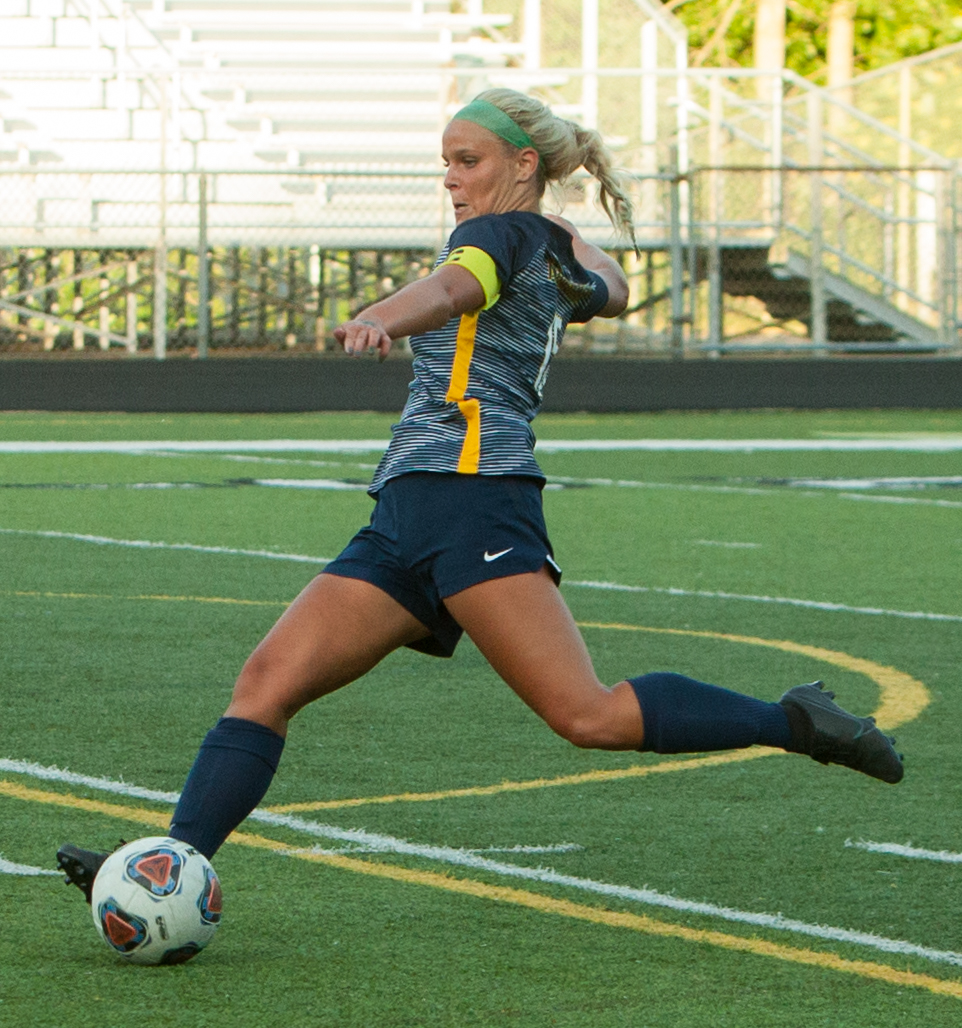 Emily Olsen leans back for a free kick during second-half action for North Muskegon. Photo/Jason Goorman 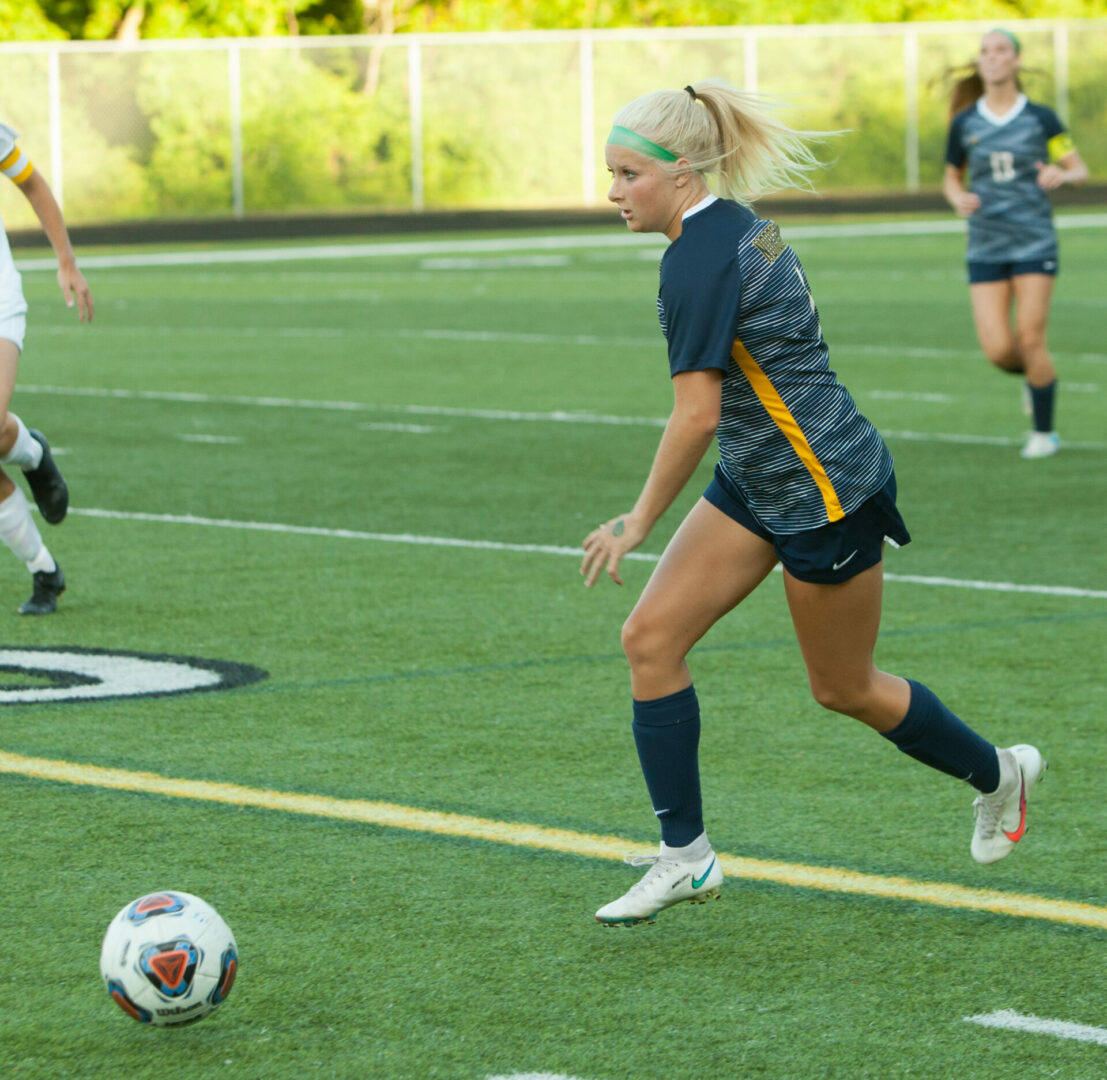 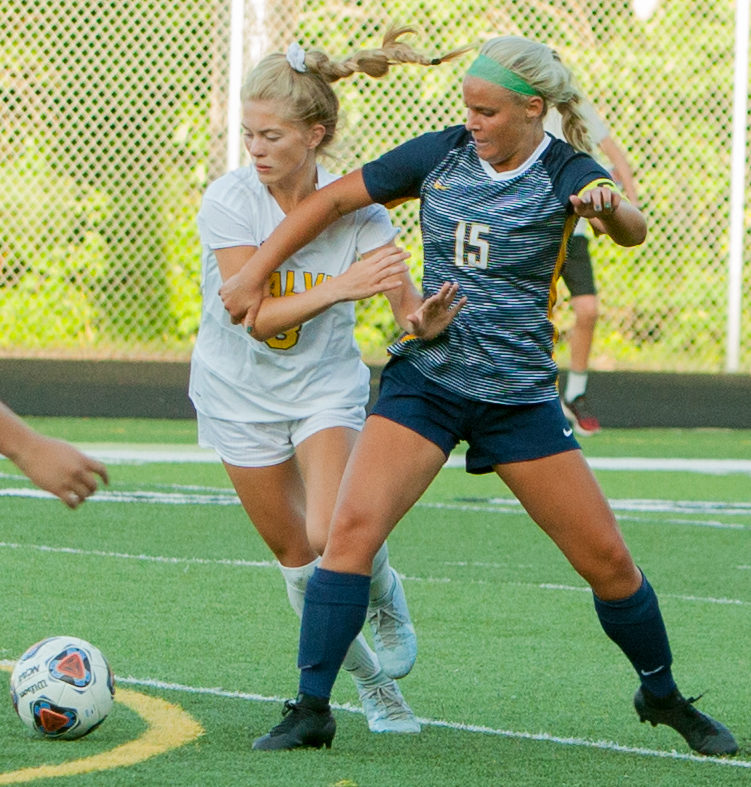 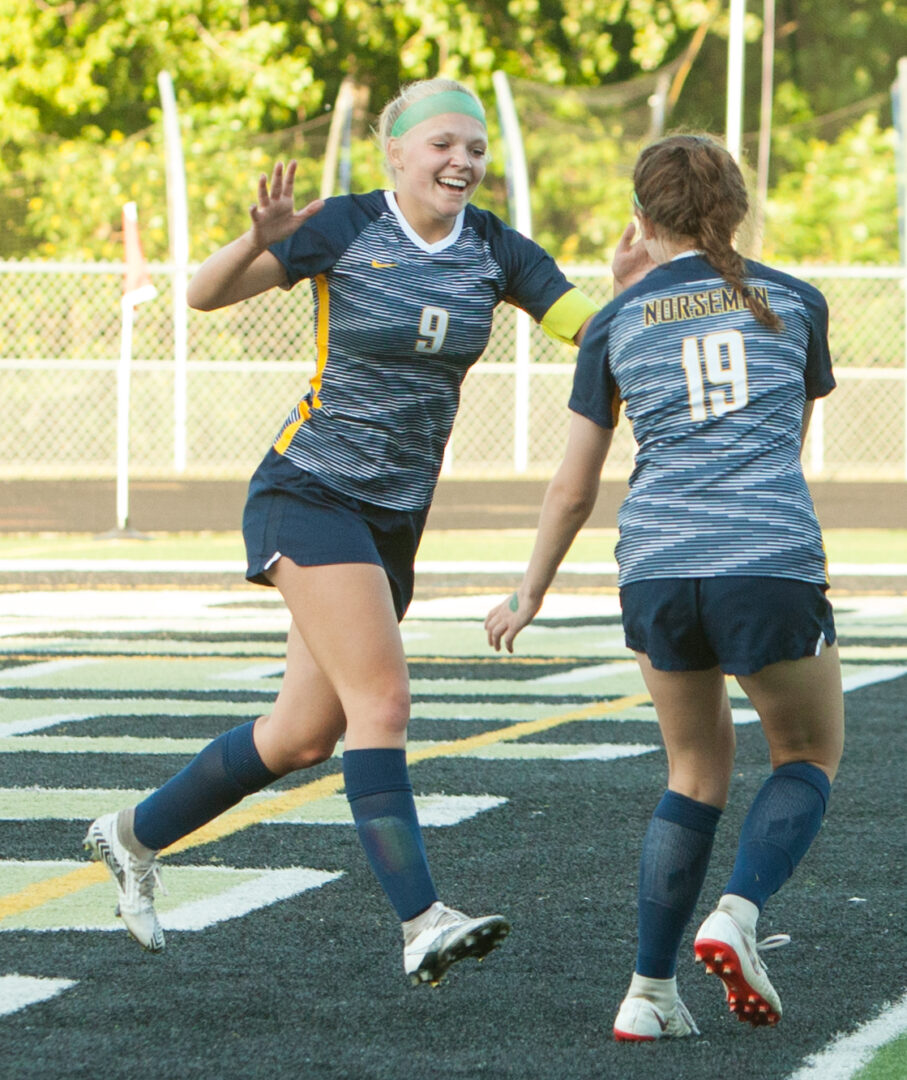 Hope Johnson is congratulated by teammate No. 19 Katie Kinahan after putting North Muskegon up 2-0. Photo/Jason Goorman 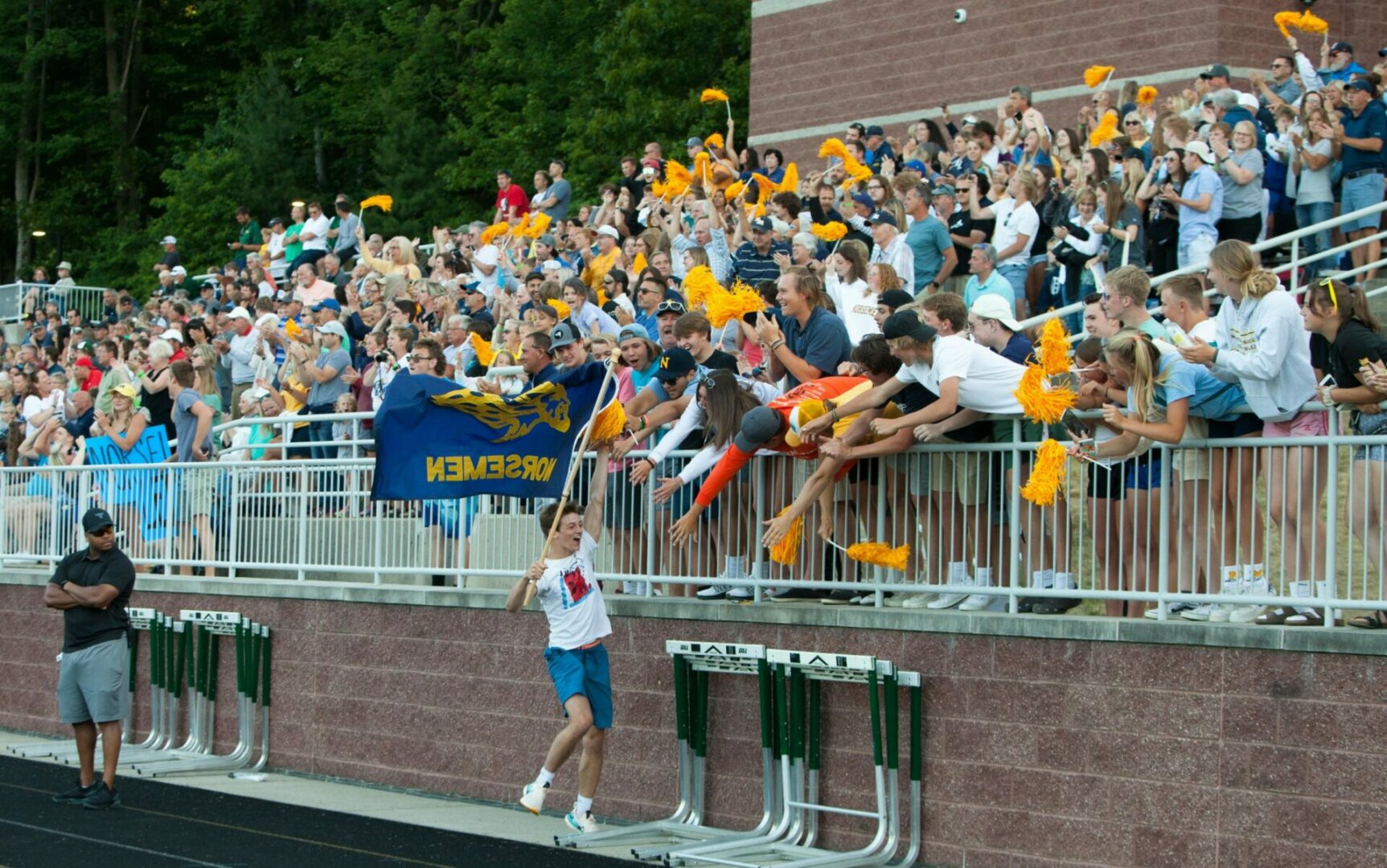 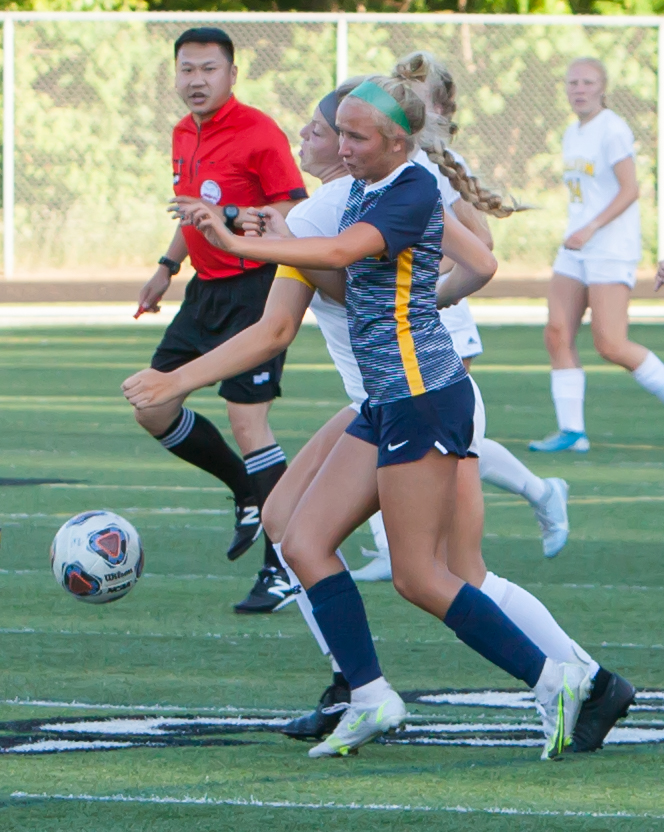 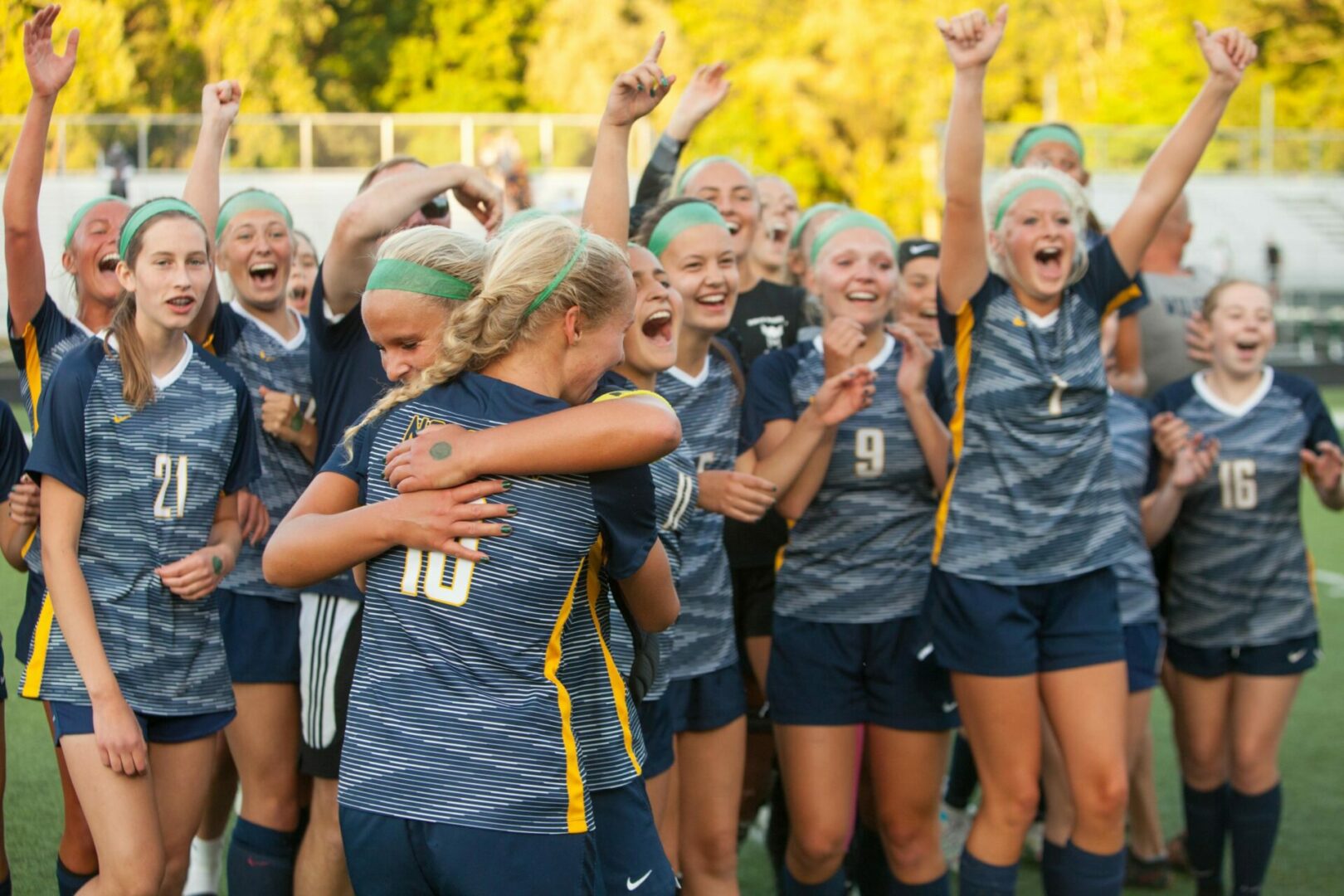 The Norse celebrate after the big semifinal win. Photo/Jason Goorman 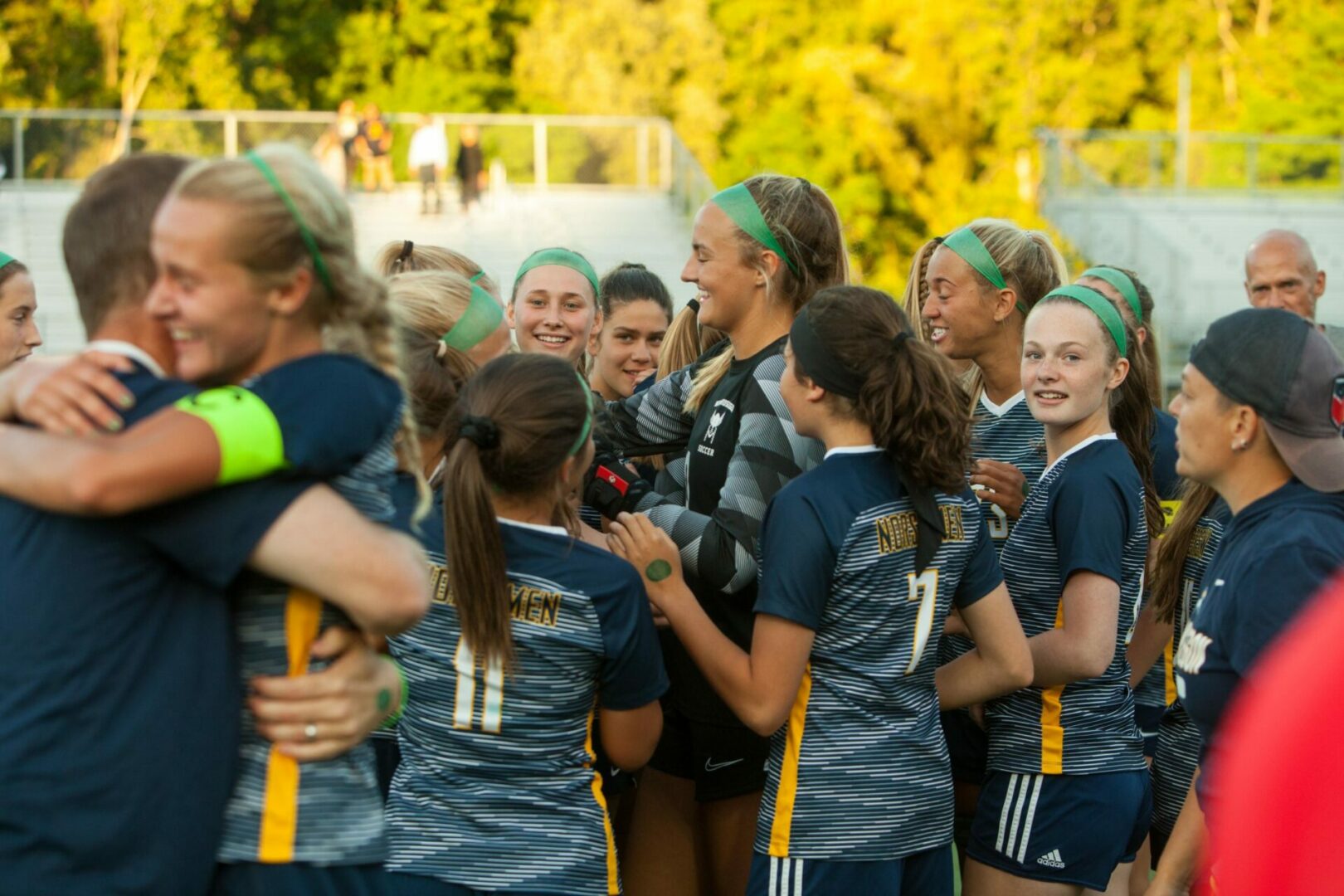 Norse goalie Syann Fairfield (middle) stands in the middle of her teammates after posting the shutout. Photo/Jason Goorman 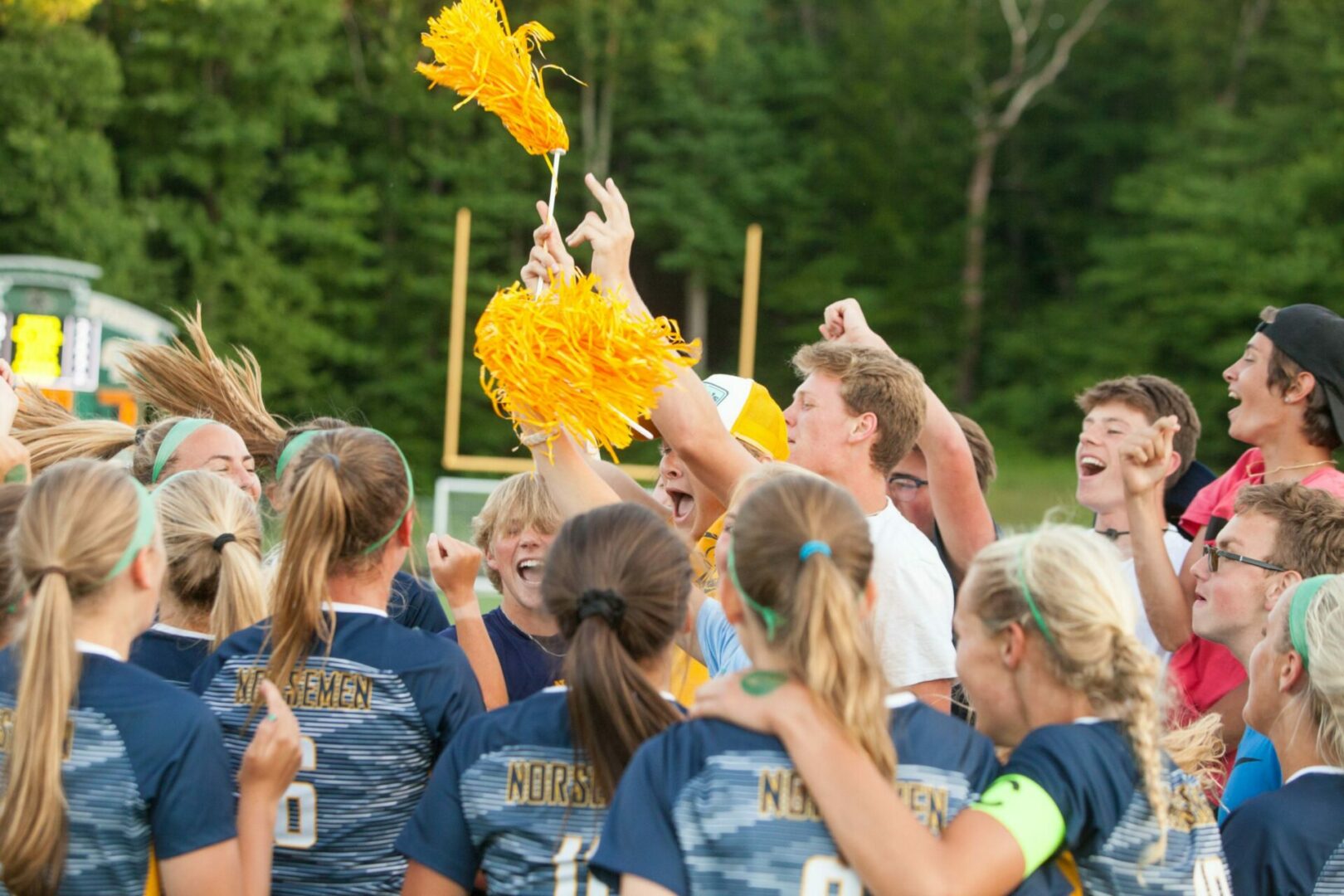 An pumped up student section joins their North Muskegon team on the field after the win. Photo/Jason Goorman 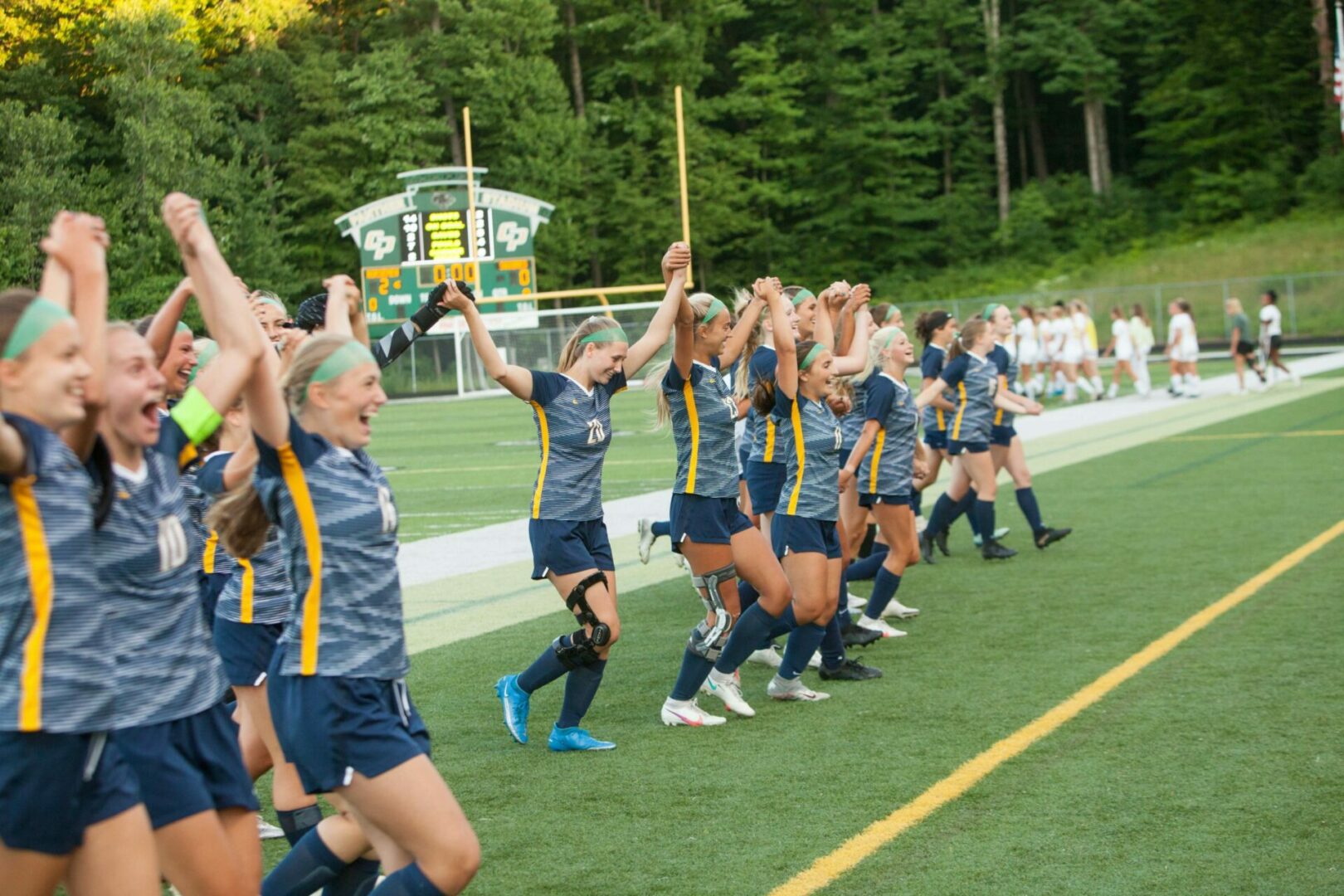 The Norse acknowledge their fans after the earning a berth into the Division 4 state finals. Photo/Jason Goorman 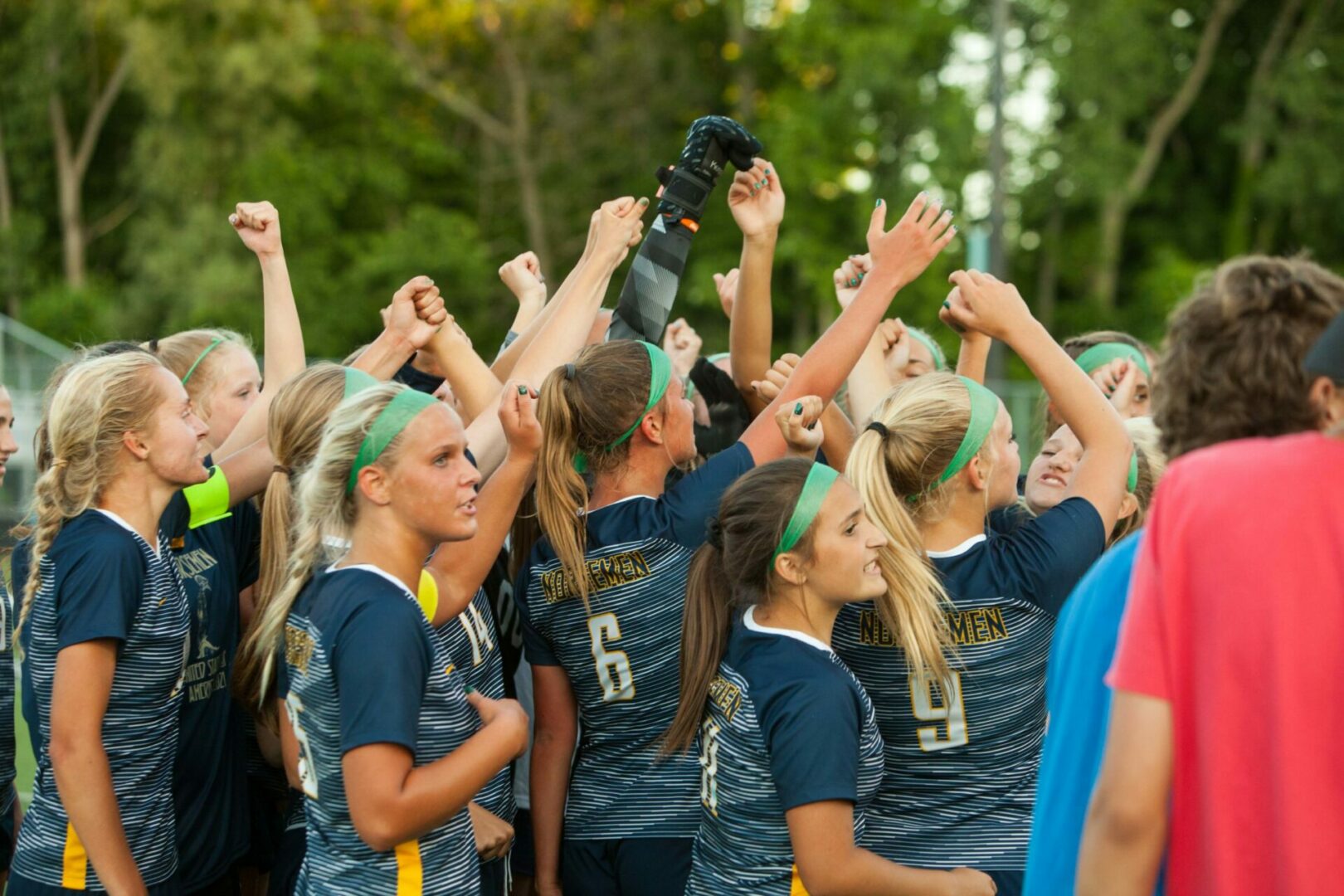 Ludington wins all three volleyball matches at the Fremont quad