EAST LANSING – The North Muskegon girls soccer team was clearly tired of being just one of the best.

The Norse were ready to prove, once and for all, that they were the very best – and they drove that point home with an exclamation point on Saturday. 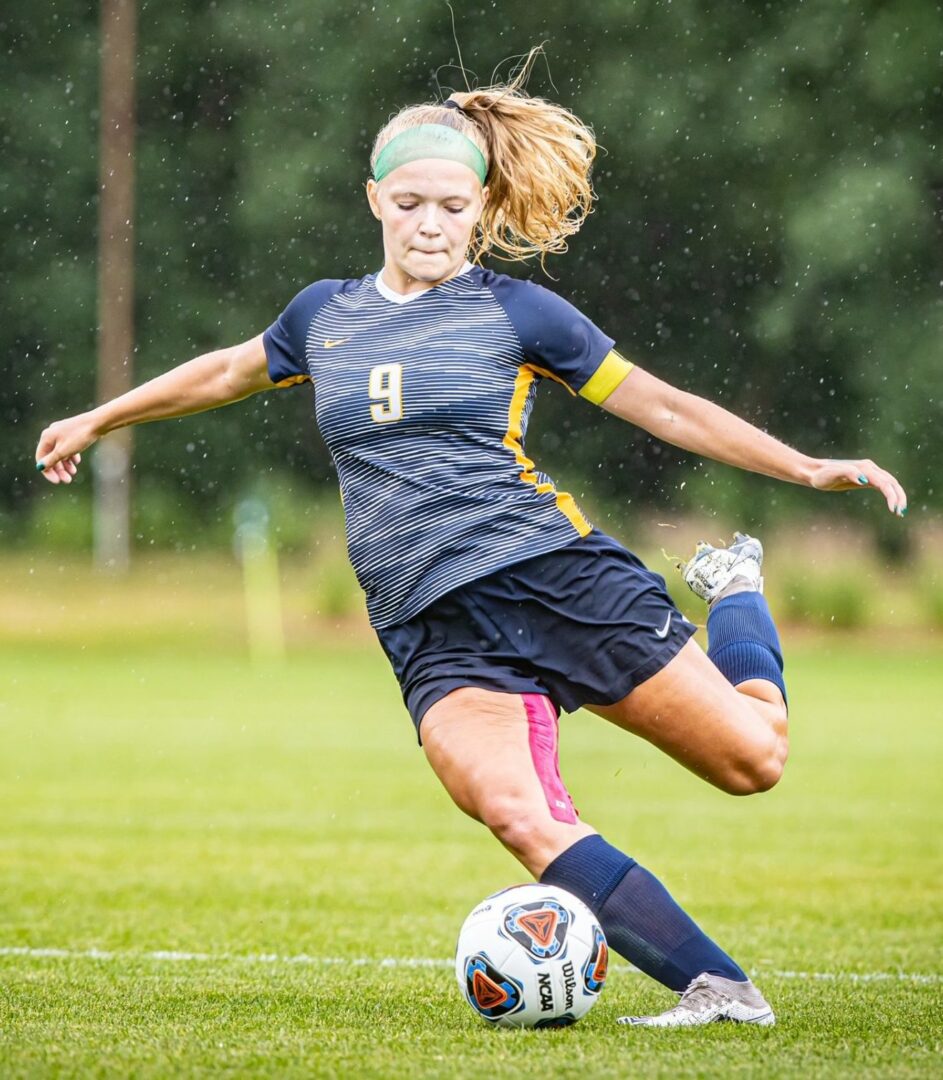 Hope Johnson looks down to take a shot just inside the 18 for North Muskegon. Photo/Tim Reilly

The Norse, who were eliminated from the state semifinals in 2018 and 2019 by slight one-goal margins, left no room for debate when they plowed past defending champion Royal Oak Shrine Catholic 5-0 in the Division 4 state championship game at Michigan State University.

The Norse broke the game open with four goals in the second half, and displayed their offensive depth with five different players finding the net.

Senior forward Hope Johnson, who scored once on Saturday and finished with 38 goals on the season, admitted that memory played a big role in the team psyche. But she also said the current team, with a lot of younger players who weren’t around two years ago, have formed a special bond that made the championship run special.

“We especially felt that the last game, a lot of pressure to overcome that hurdle and get to the next step,” Johnson said. “Last night we had a team dinner, and we knew we had to come out and play for each other. I have never been on a team with players who care so much about each other and love each other so much. We were all in for each other.”

For many of the champions, Saturday’s game was a continuation of a story that went back several years. The eight North Muskegon seniors carried painful memories of the 2019 state semifinals, when they lost 1-0 to Kalamazoo Christian, and never got the chance to prove themselves on the biggest stage of the state tournament. 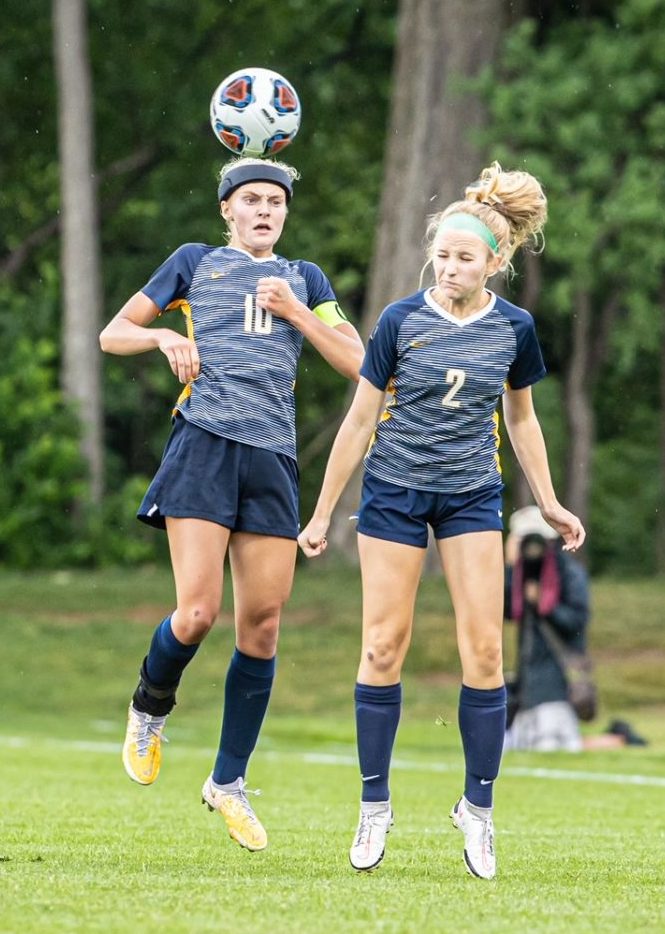 North Muskegon’s Audrey Wilson heads the ball as No. 2 Jaley Schultz gets up on her toes. Photo/Tim Reilly

Some of them were on the team a year earlier as freshmen, when the Norse lost 2-1 in overtime to Kalamazoo Christian in the semifinals, and they had two years of frustration to address.

Of course there was no soccer last spring, because all Michigan high school sports were cancelled due to COVID. But the memory of the heartbreaking losses easily skipped a year and provided all the necessary motivation for the seniors, who led the team to a dominating 20-1-1 record this season.

Sophomore Jaley Schultz, who scored the first goal of Saturday’s victory, said the seniors’ determination to finish what they started was a driving force all season.

The Norse captured a West Michigan conference title and district and regional championships, before claiming the biggest trophy of them all on Saturday.

“I witnessed those games both years they lost it,” said Schultz, the daughter of Norse assistant coach Adam Schultz. “I saw the look in their eyes when they lost it. There was so much determined this year, to create a new culture, to create a family culture. This year was definitely different. You could feel it in the air, for sure.” 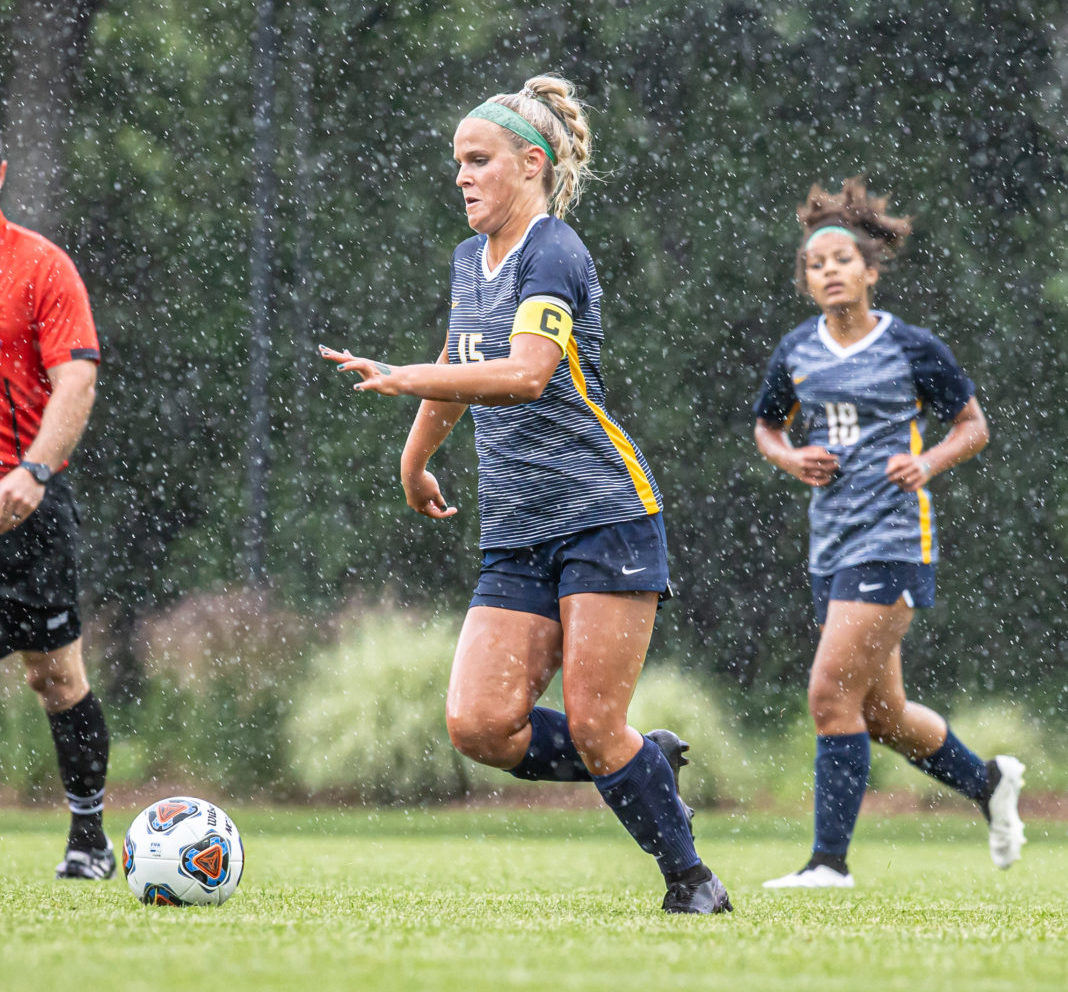 North Muskegon captain No. 15 Emily Olsen pushes the ball through the rain as teammate Spener Zizak follows behind. Photo/Tim Reilly

Newcomers also played very crucial roles in the championship run. The most important one was head coach Caleb Parnin, a 2003 North Muskegon graduate who returned to town to teach at the high school in 2019, after spending 11 years teaching in the Chicago area.

The plan was for Parnin to be the assistant coach of the girls team in 2020, then take over for retiring coach Ryan Berends this season. He never got the chance to be an assistant, because the 2020 season never happened, so he walked straight into the head coaching job and inherited a team that was locked and loaded for victory.

“We believed in this team and it’s potential from the beginning,” Parnin said. “We felt that this was the year they could really do it. We stayed healthy, avoided COVID problems, and we felt very confident that we could be a threat.

“I remember before the season, when the players pointed to a spot in the gym and said that’s where we were going to hang the championship banner. They wanted it.

“We had a little pasta party last night, and you should have heard the way the underclassmen gushed over the seniors. It was the senior’s leadership that made the difference, and their determination that we weren’t going to lose it.” 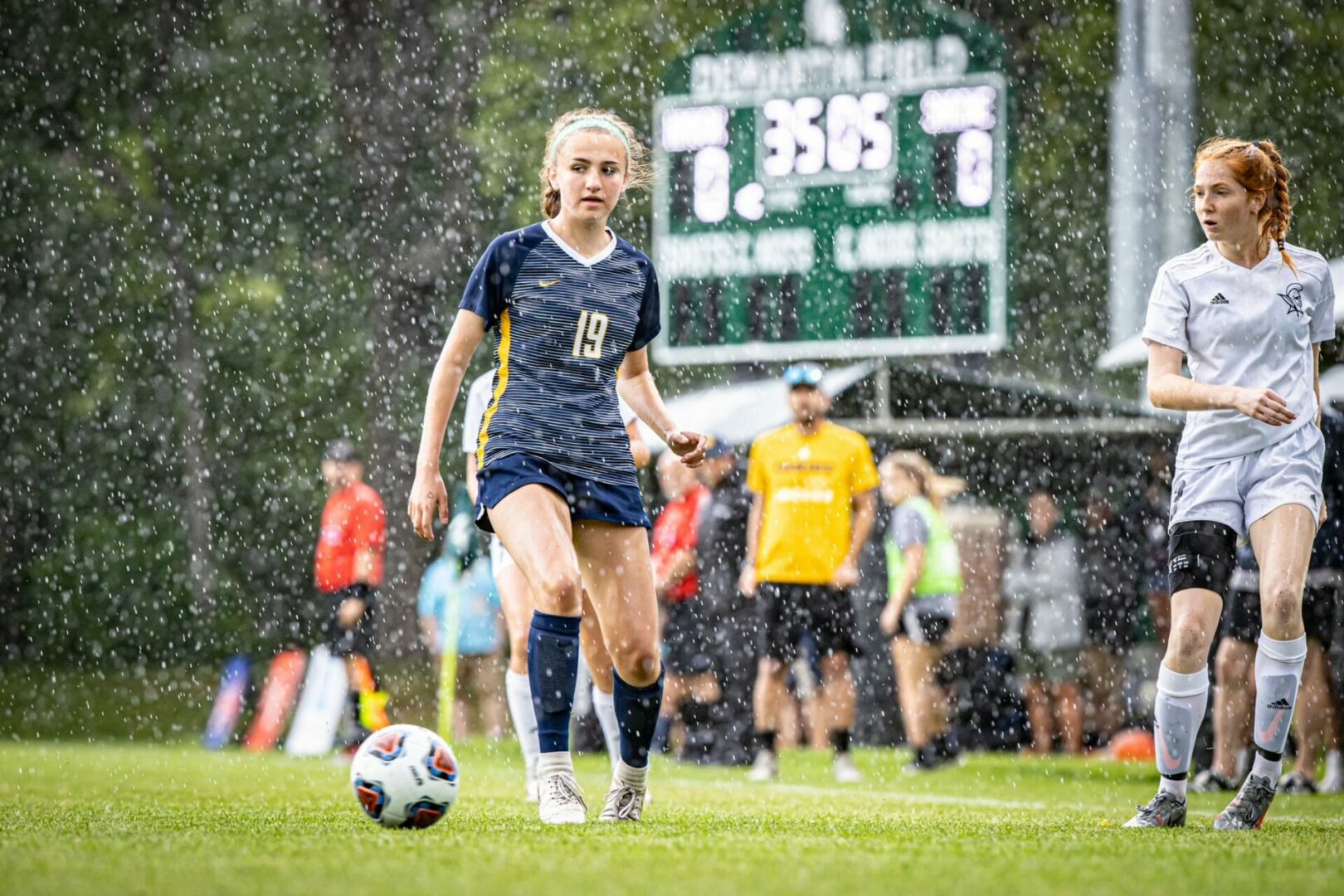 Katie Kinahan passes the ball for North Muskegon during a downpour that started shortly after the opening kickoff. Photo/Tim Reilly

The first 12 minutes of the game were pretty quiet, before North Muskegon broke through with a goal from Schultz 12:09 into the contest.

Shultz scored from close range from the right side of the Royal Oak Shrine Catholic net, setting the hundreds of North Muskegon fans in the bleachers into a frenzy.

Shultz gave a lot of credit to Johnson, who created the play with her superior ball-handling and passing skills.

“It was crazy – I couldn’t have found a better time for that to happen,” said Schultz, who believes she only scored three goals this season. “Someone passed the ball to (Johnson), she got past a few defenders, drew the goalie out, then passed right past the goalie, and I just tapped it in. It was a perfect ball. I’m just so grateful to the upperclassmen for giving us opportunities like that.”

The score remained 1-0 at halftime. North Muskegon had a 3-1 shots on goal advantage in the first 40 minutes, and Royal Oak Shrine Catholic did not get a shot on goal until later in the half, with 12:31 remaining on the clock. 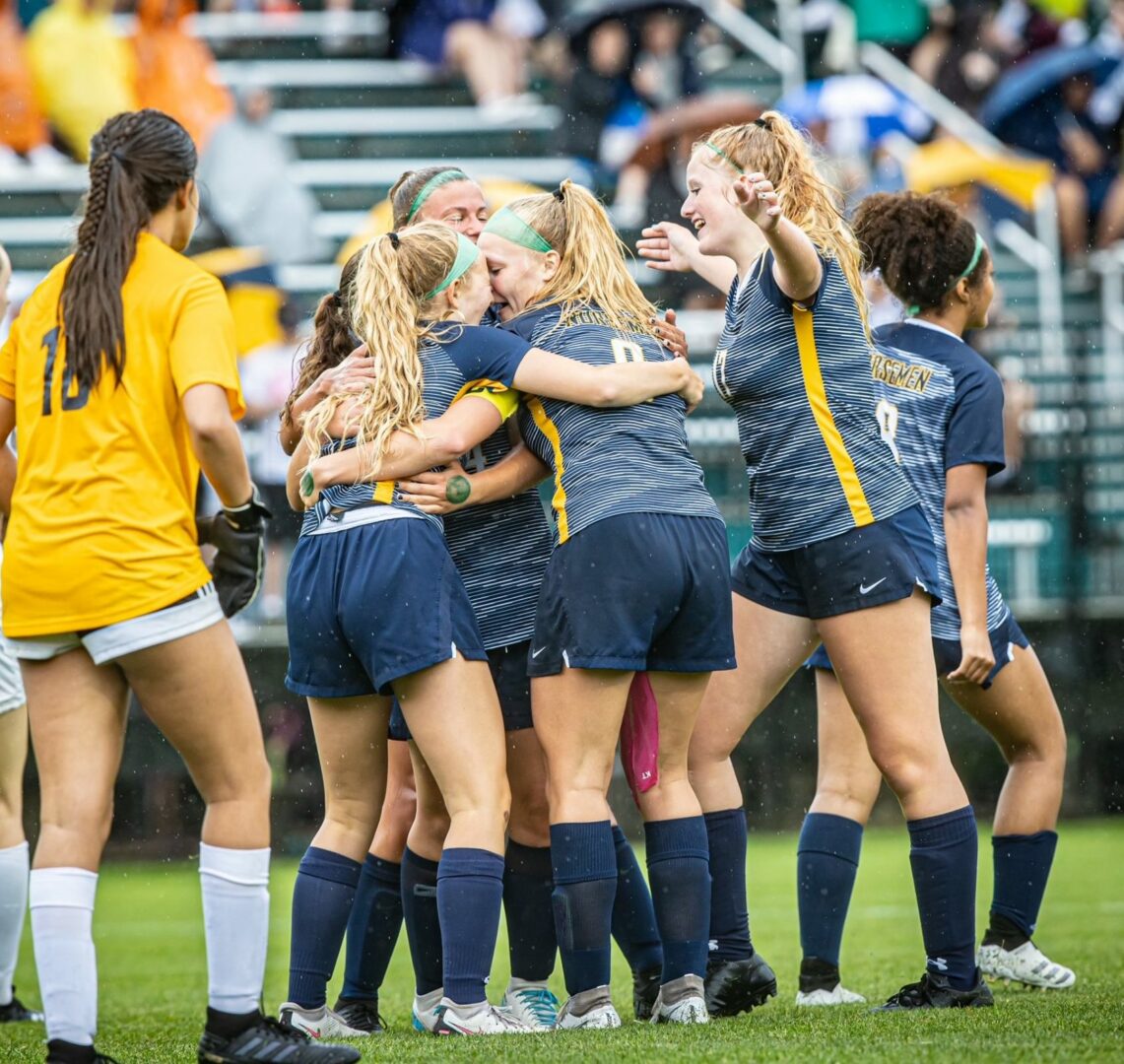 The Norse took control in the second part of the second half. Johnson gained possession of the ball around midfield, dribbled skillfully around several Royal Oak defenders and broke in alone on goal and left Royal Oak goalie Addy Vemulapalli laying on the ground behind her and made the score 2-0.

North Muskegon went up 3-0 with 22:38 remaining when Johnson sent a ball into the goal box from the right corner of the field, and Emily Olsen popped it in from close range.

Johnson had a goal disallowed with 22:17 remaining because the play was offside, but North Muskegon made it 4-0 with 9:29 left on a goal by Katie Kinahan.

Audrey Wilson scored the final goal with 6:08 remaining, then the celebration began for a team that had been knocking on the championship door for three long years, and finally achieved their goal. 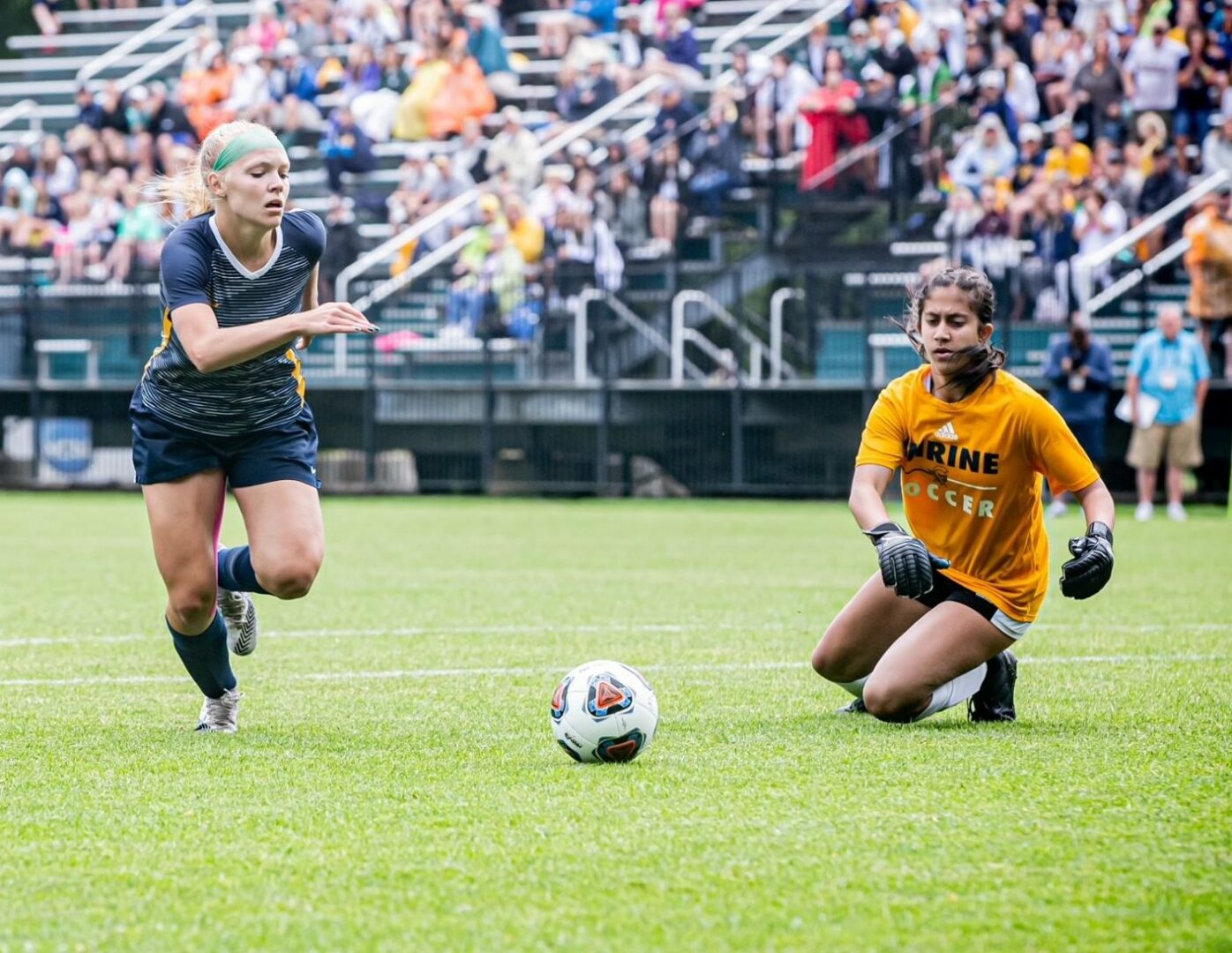 It was no accident that North Muskegon posted a shutout against a defending state champion in such a pressure situation. The Norse defense was on top of everything on Saturday, preventing Royal Oak Shrine Catholic from ever getting its offense untracked.

Royal Oak Shrine Catholic had a few offensive opportunities deep in the North Muskegon zone, but senior goalkeeper Syann Fairfield was more than up to the challenge each time. She only had to stop three shots, but that’s because she was masterful at watching plays develop and venturing out into traffic to jump on the ball before Royal Oak Shrine Catholic could get a shot off.

“I am not surprised in the least bit that she had a shutout,” Coach Parnin said. “She is so tough and determined. She has that gamesmanship, so even if they get a good shot off, she is going to stop it. She comes out and slides and does all that stuff, and it just shows her athleticism.” 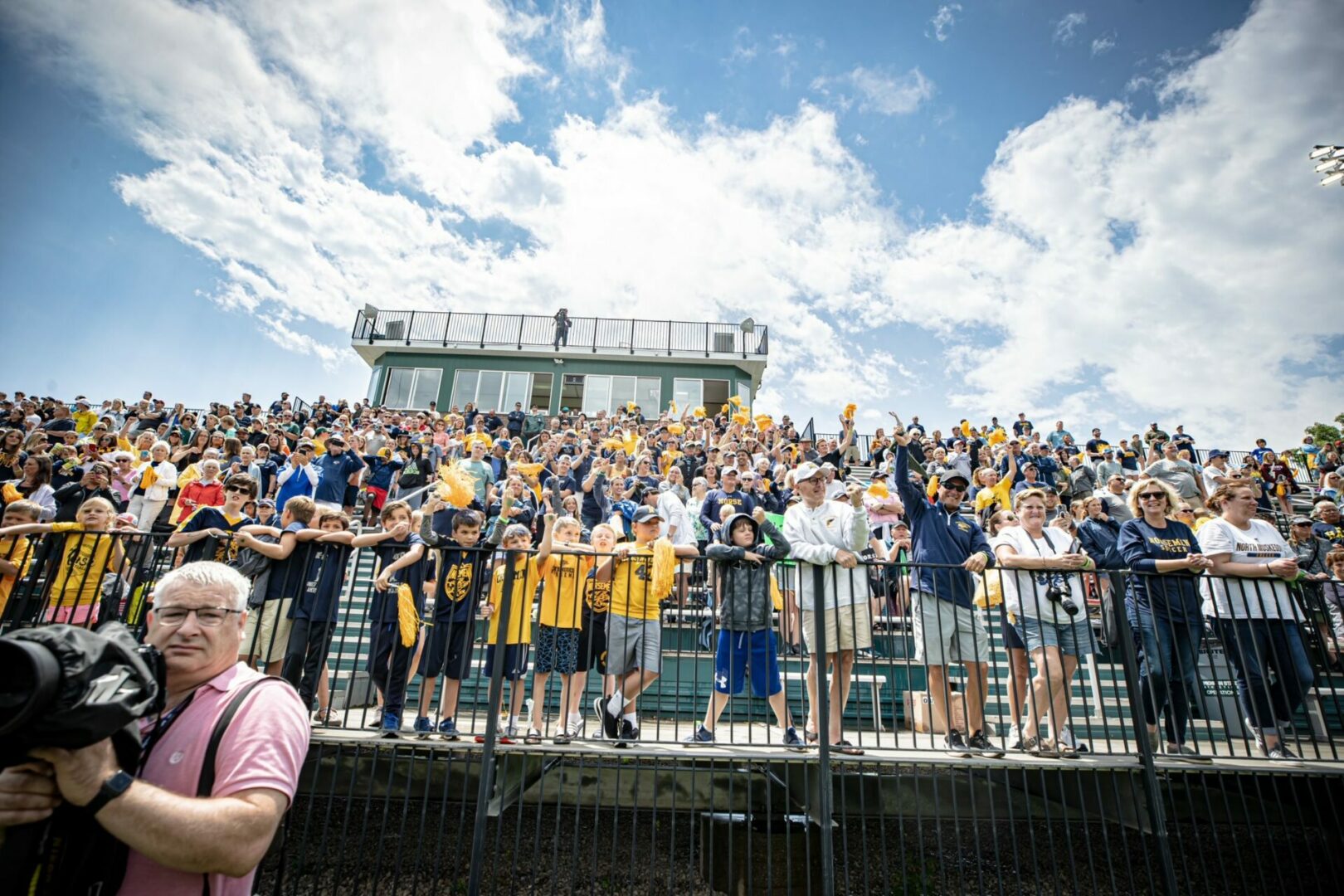 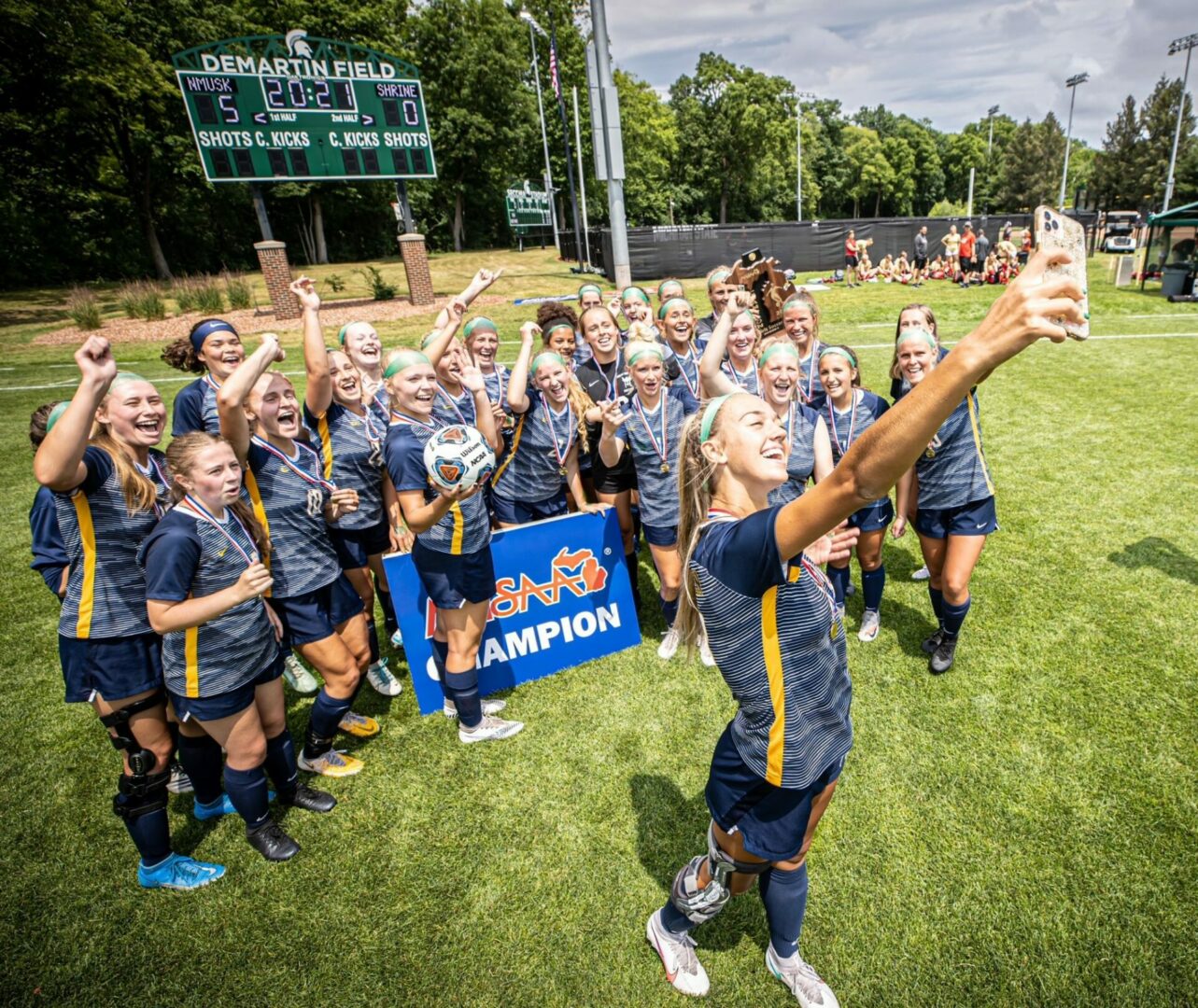 Georgie Kersman gets a selfie shot with her phone as her Norse teammates celebrate in the background. Photo/Tim Reilly 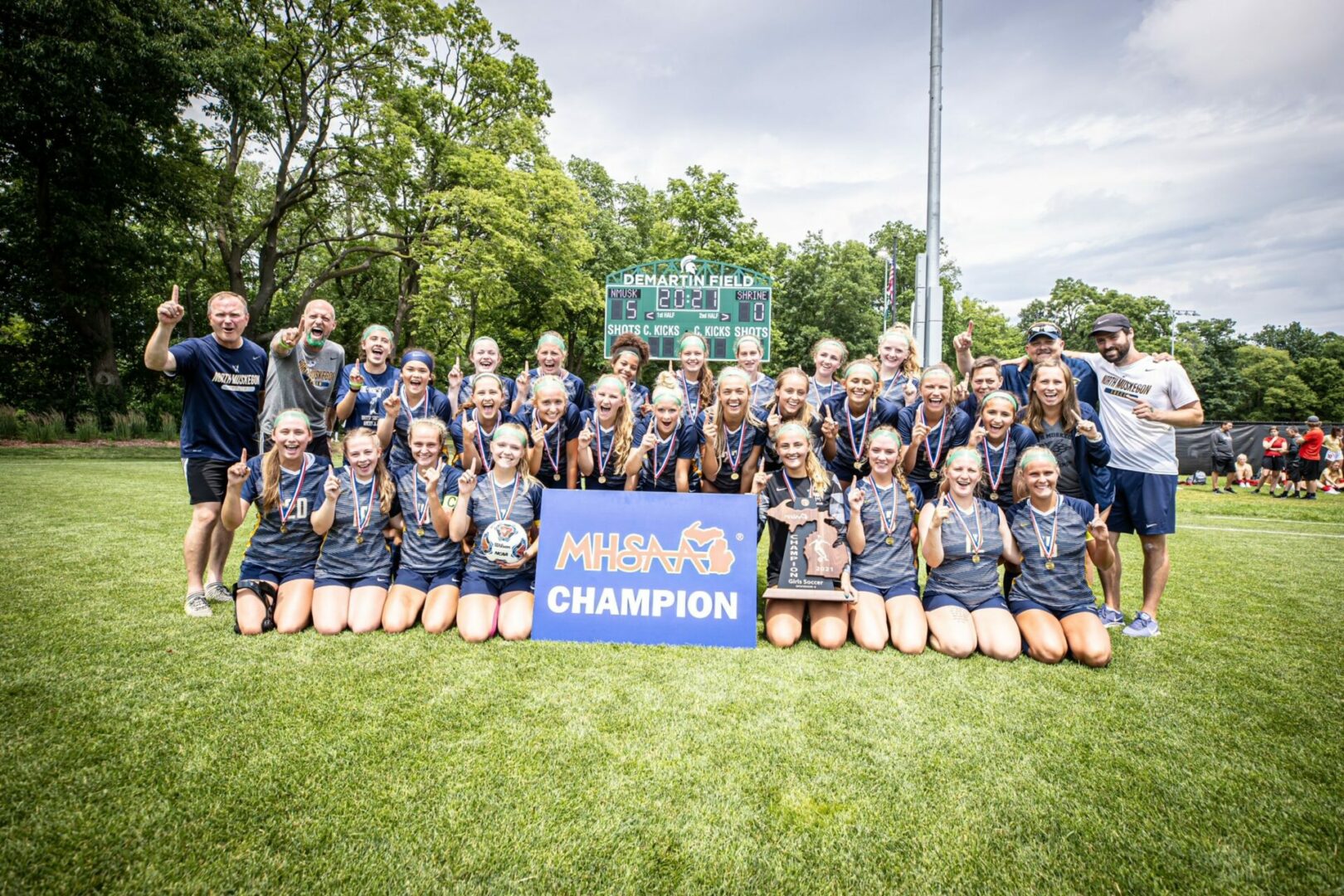 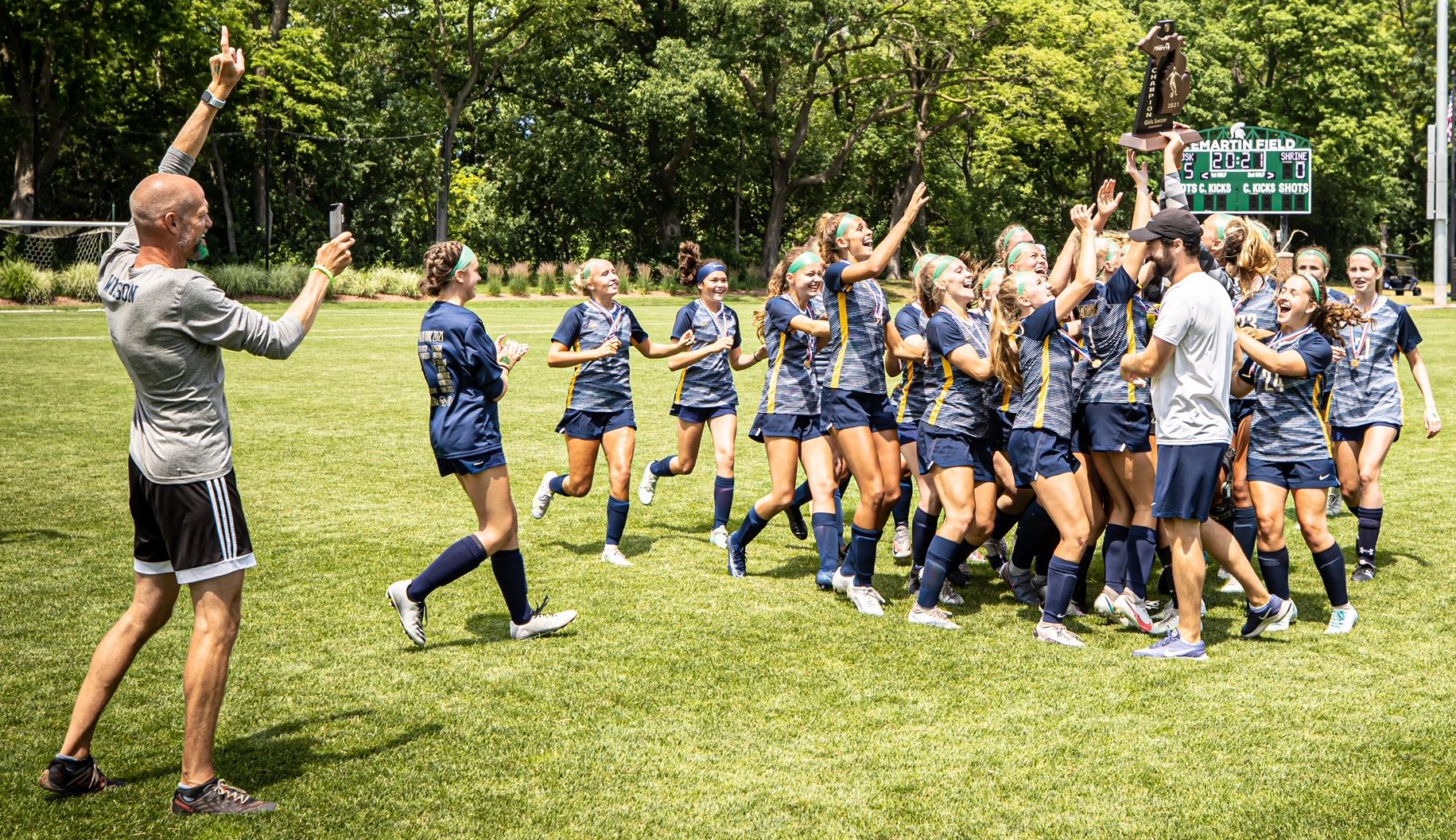 The Norse celebrate after being awarded the Division 4 state championship trophy. Photo/Tim Reilly