Fruitport Comes up short in 42-35 loss to Cadillac

That’s maybe the best that can be said.

And at this point of the season, maybe that’s all that matters.

Before the planning shifts to Whitehall, though, Cadillac has got some work to do and it’s really not on the field of play.

Both teams let their emotions get to them on Friday and it turned what was a solid first half into a flag-fest down the stretch.

Fruitport’s final drive was kept alive by a couple of Cadillac penalties, including unsportsmanlike conduct. The Trojans had one final heave toward the end zone but it was batted away and the clock ran out.

The Vikings beat Fruitport 28-12 in Week 2 after being more physical than the Trojans and wearing on them.

“It’s hard anytime you beat a team twice in a year,” Cadillac head coach Cody Mallory said. “We really got after them in the first meeting and they addressed those spots. 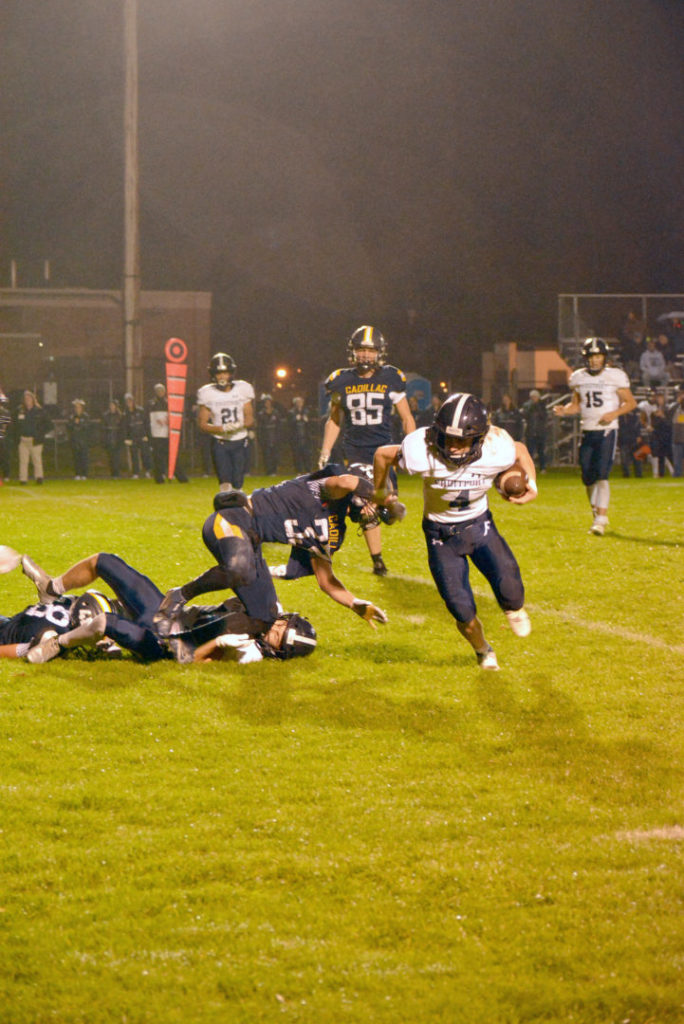 “They did a good job scheming up protections. We had a couple of miscues, too, that led to some big plays. We’ve definitely got some stuff to work on.”

Cadillac got on the board first at the 4:46 mark of the first quarter on a 4-yard run by Chris Reinhold before Fruitport evened it on a 44-yard run by Pierce Jolman three minutes later.

The Vikings went up 13-7 on a 2-yard run by Aden Gurden before the Trojans responded again on a 19-yard run by Aiden Vela for a 14-13 lead at the 4:39 mark of the second quarter

The Vikings largely did what they wanted offensively on the ground and kept going back to it.

“I felt like our guys did a good job of moving the ball,” Mallory said. “We really did a good job up front and knew ball security was going to be a big thing.

“I was really happy with how we took care of the ball.”

The fireworks were just getting started.

The Trojans converted a 76-yard pass play from Gavin Reames to Cody Nash to open the fourth quarter to cut it to 35-27 and Cadillac seemingly put it away on a 14-yard run by Collin Johnston with 4:43 left.

That’s when things got chippy and Fruitport kept going to the air. It resulted in a 12-yard pass play that made it 42-35 with 1:00 remaining.

The Trojans recovered the onside kick at midfield with 54.4 seconds to go. They’d pick up about 20 yards before the final heave sailed away and Cadillac held on.

Kaleb McKinely led Cadillac with 126 yards rushing on 20 carries while Gurden had 96 yards on 134 carries. Harsh had 98 yards on six carries, as well.

Johnston led the way defensively with eight tackles while Chris Reinhold had seven. Harsh, Teegan Baker and Trenton Dennis each had six while Harsh also picked off a pass.

MHSAA: Cancelled Muskegon Heights-Muskegon Catholic football game will not be a forfeit