But that didn’t happen, and instead the Orioles were given the task of facing Division 1 Hartland, considered a powerhouse in high school basketball circles.

The results were not good, as the Orioles struggled to keep up with the Eagles and found themselves buried in a deep hole early, falling to the downstate juggernaut, 51-26 to keep the Eagles perfect in the early season at 4-0.

“We stepped up from playing a very good team, to playing a great team,” Ludington head coach Warren Stowe said. “But, I thought our girls played hard for all 32 minutes.

“I told the girls before the game, at halftime and after the game that this experience will only make us better. I think Keelyn Laird played some of her best basketball. She really held up.” 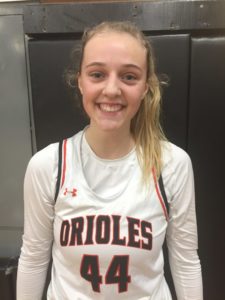 Laird scored 12 points to lead the Orioles, who fell to 3-3 with the loss. RyAnn Rohrer added six points.

It was a much tighter scoring third quarter, but the Eagles still boasted a 8-7 advantage and headed into the fourth period with a 34-17 cushion. Hartland had a 17-9 edge in the final eight minutes.

Montague wrestling team falls to both Ludington and Shelby Wednesday