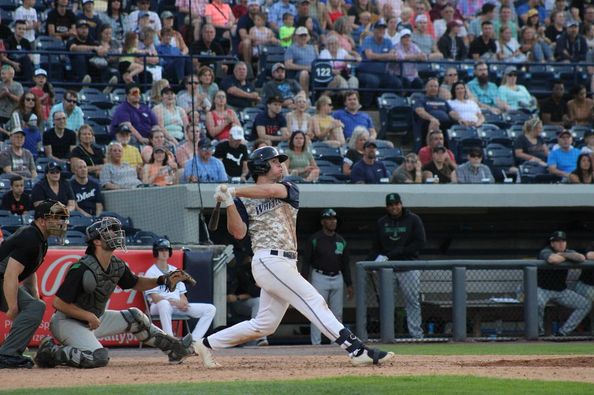 COMSTOCK PARK, MI – Colt Keith’s walk-off two-run homer in the bottom of the ninth inning delivered the West Michigan Whitecaps their biggest swing of the season in a thrilling 9-7 victory in front of 5,897 ecstatic fans Sunday night at LMCU Ballpark.

Keith, a Detroit Tigers Top-15 prospect, delivered the two-run shot with two outs to become the first Whitecap since Eric De La Rosa accomplished the feat against the Dragons on June 27, 2021. Keith is just the second West Michigan player to deliver a walk-off homer in the last decade of ‘Caps baseball.

West Michigan responded with their biggest inning of the series in the bottom half, plating seven runs on seven hits – highlighted by a two-run triple from Trei Cruz – to put the ‘Caps in front 7-2.

Montero settled down after the first inning, striking out five hitters through the following four innings as Jose Torres added an RBI-single in the second inning to slim the lead to 7-3.

Dayton continued to chip away, plating two runs in the sixth inning before Nick Quintana and Mat Nelson roped run-scoring singles in the seventh and ninth to tie the game at 7-7.

In the bottom of the ninth, Corey Joyce reached on a two-out single before Keith blasted a two-run walk-off homer, sending the crowd into hysterics and securing the 9-7 win.

Whitecaps reliever Elvis Alvarado (1-0) picked up his first win, throwing 2.0 innings while allowing a run and a strikeout.

Dragons pitcher Carson Rudd (1-2) suffered his second loss, allowing the game-winning home run. The Whitecaps improve to 20-25 as the Dragons fall to 30-14.

Whitecaps manager Brayan Peña is just one game shy of 150 career wins. Joyce, Keith, and Holton all enjoyed a multi-hit performance in the victory.

The Whitecaps hit the road for a six-game series against the Lake County Captains – Midwest League affiliate of the Cleveland Guardians beginning on Tuesday at 6:05 pm.

Jordan Marks gets the start for the Whitecaps against the Captains.

Broadcast coverage with Nate Wangler starts on the Whitecaps Baseball Network at 5:50 pm. Get your tickets for all 2022 home games now at www.whitecapsbaseball.com.