The boys split on the day defeating Muskegon Heights 76-27 and losing to Orchard View 45-82.

Coach Gould, “The weather played a significant role and OV capitalized on their depth in hurdles and the throwing events to put the meet away. We continued to show some small improvements and the 4 x 100 relay (Joel McKay, Owen Varnado, Joe Waller and Jaron Childers, all seniors) ran an improved race over a week ago putting themselves at the top of our Regional ranking for the moment in that event. Against Muskegon Heights we used mid-distance/distance runners and most relays to pull away for the win. It was good to get out of the day with the split and hopes of better weather for sprints and jumping events in future meets.” 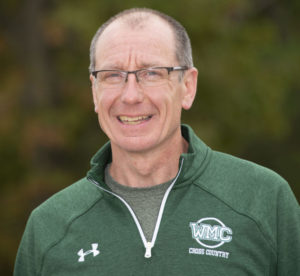 The girls picked up a pair of wins, defeating Orchard View 79-43 and Muskegon Heights 83-18.

Coach Gould, “The weather was not great for much of anything, but the mid-distance/distance crew used the day to chase additional qualifying spots for Regionals in May. Our depth was much greater than both our opponents so, we looked to maximize and also get some good efforts in. In the discus throw, seniors Kyla Wiersema and Raina Luhring threw significant person bests. Raina (91’9″) now at #9 all-time in WMC history and Kyla (96’1″) at #7. It was a solid all around team day to pick up a pair of wins.”

Friday, April 29. Kent City Elite Invitational, our first “big” meet of the year, about 20 teams, scoring in two divisions. Scarlet for smaller schools, including WMC and White for larger schools.

Boys: 6th with 20 points, Scarlet was won by Saugatuck with 82 points.

Coach Gould, “The sun made an appearance and I think all the teams in attendance went home with some great improvements and we were no exception. The sprint crew was able to see some good time improvements, especially our seniors Joe Waller in the 100 (12.07), Jaron Childers in the 200 (23.83) and Jalen Melvile in the 400 (58.41). The 4 x 200 relay (seniors, Joe Waller, Joel McKay, Owen Varnado and Jaron Childers) put up a Regional leading time of 1:36.96 to place 3rd of 16 teams in that event. Varnado also picked up 2nd in high jump (6’0″) and 3rd in long jump (18’10”). In the distance crew Graeson Lawrence (So.) continues to close in on the 5:00 1600, going 5:05.68 for a new personal best. All around, a good day with numerous personal bests to go along with the mentioned performances.”

Girls: 3rd with 35 points, Scarlet won by Pewamo-Westphalia with 99 points.

Coach Gould, “The ladies came out ready to do battle today, with mid-distance/distance and field events leading most of our scoring, but again pretty much everyone leaving with a personal or seasonal best. In the very first track event for the ladies the 4 x 800 relay (Abby VanderKooi Sr., Grace VanderKooi Fr., Ava Rotma Sr. and Grace Folkema So.) defeated a field of ten teams on their way to the #4 performance in WMC history with a 10:15.04. The other relay highlight was the 4 x 100 relay (Kyla Wiersema Sr., Maddie Wiersema Sr., Jessica Eenigenburg Jr. and Chalon Anderson-Williams So.) picking up some points with a 7th place finish and new season best in the event. In the Elite section of the 1600, Abby VanderKooi (Sr.) placed third in a blanket finish that saw the former meet record broken by the first three finishers, who had broken away from a quality field of runners. In the 800 Grace VanderKooi (Fr.) finished 6th (2:35.74) for a new personal best, just outside the WMC all-time top ten. In the 400 Ava Rotman (Sr.) finished 7th (1:06.87) for a new personal best. Field events was another strong point on the day. In the discus Kyla Wiersema (Sr.) and Raina Luhring (Sr.) made the finals with Kyla finishing 7th (91′-09″) and Raina 9th (86′-02″). Kyla added an 8th in high jump (4’08”) and sister Maddie Wiersema (Sr.) a 7th in long jump (14’02”) which was a new personal best. The twin sisters capped our scoring in the last girls field event final placing 4th (Kyla) with 33’04” and 7th (Maddie) with 32′-06″ in the shot put, both efforts being new personal bests. A great day by this entire girls team, so many improvements, giving us a boost of energy heading into May.”

Coach Gould, “I will say the same thing I said three years ago when I coached the last group of record holders in this event…. I have been waiting for this opportunity since the minute we left the Michigan International Speedway and the Cross Country State Finals back in November. The chance to run the DMR is limited, so these girls had to double back from the 4 x 800 relay and individual events last night in Kent City to take this opportunity.  After the threat of rain all day in Grand Rapids the skies literally opened as we stepped to the starting line. Grace VanderKooi put us in a great position on the opening leg, which is difficult due to the odd distance of 1200 meters, she delivered a fantastic effort in an absolute downpour, as WMC went into the second leg basically tied for the lead. Ava ran a great 400 to keep us in contact with the leader and we entered the third leg in second, and third a bit back. Grace Folkema delivered a great 800 to keep us basically the same distance behind the leader, third had closed a bit but we still enjoyed a gap over them entering the anchor leg. I felt if Abby VanderKooi got the baton with a lead or could see the leader we had a great chance to win, there was not a girl in this field that could run her down. It would only be an issue if we were too far back, the other girls kept us very close to the lead so Abby attacked on lap one and never looked back. At that point the win and the school record were in hand, it was literally a matter of how much did Abby have left after the prior day’s efforts. Her 5:08 1600 took us from maybe 4 seconds behind entering the final leg to an 18 second victory.”

“To say I am proud of this group would be a bit of an understatement, to come out the day after racing so hard in the 4 x 800 and other events, to take a shot at this somewhat obscure event and record was a sacrifice, but they wanted to go after it. I also have to thank our alternate, Nora Anderson (So.), who was with us just in case something went bad in warm-ups on Saturday.”