For Matt DeBlouw, getting drafted by NHL would be a dream come true 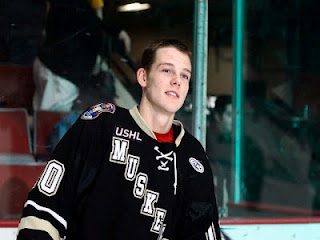 Matt DeBlouw has big plans to spend the weekend in Pittsburgh.

Doesn’t sound all that glamorous except for the fact DeBlouw’s purpose for heading to the Steel City is to attend the 2012 NHL Entry Draft. 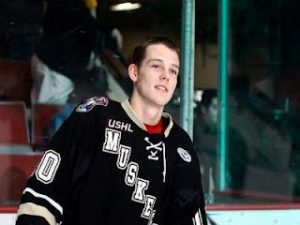 Matt DeBlouw is expected to be chosen on Saturday during the 2012 NHL Entry Draft.

DeBlouw, a native of Chesterfield and a Michigan State University recruit, played two seasons for the Lumberjacks. He is projected as a middle-round pick in the draft that begins Friday night with the first two rounds and concludes on Saturday with rounds 3-7.

That means DeBlouw, a 6-foot-1, 185-pound centerman, expects to hear his name called at some point on Saturday. This past season, in 58 games, DeBlouw had 11 goals and 22 assists.

On Friday, two carloads of the DeBlouw family, Matt girlfriend and her brother will be trekking to Pittsburgh.

“I’m excited,” DeBlouw said. “I know Friday morning the nerves will kick in even more.”

His stock rose with a strong showing at the NHL Draft Combine last month. He scored in the top 10 of more than 100 players in several fitness tests. In a drill designed to measure leg strength (Wingate bike), DeBlouw finished second. That test is among the most important of the drills.

“I had nothing to lose and I don’t think expected much,” DeBlouw said. “The training I got in Muskegon definitely helped a lot and boosted my status.”

DeBlouw and his advisor have been in contact with several NHL teams, but DeBlouw preferred to keep their identities to himself at this point.

“I will keep my eyes open and hope that my dream comes true,” DeBlouw said. “I would be nice to go early instead of waiting around and getting antsy.”

If drafted, DeBlouw, 19, would be the first Lumberjack alum to be selected.

Current Lumberjack defenseman Rasmus Bengtsson was drafted by the Florida Panthers and Nick Seeler, who played part of last season with the Lumberjacks before being traded, was drafted by his home state Minnesota Wild last summer.

Montague’s ace in the classroom and on the mound: Ivy League-bound Bailey Belinger leads area in strikeouts and ERA