GRAND HAVEN – With as many as 17 players starting for the first time for Grand Haven’s varsity football squad, the host Buccaneers were an unknown commodity entering the 2012 season.

After Friday night, at least, Bucs Nation knows the team can pull out a victory in crunch time.
It wasn’t always pretty, but the Bucs start the season 1-0 following Friday night’s exciting 17-14 win over a game Traverse City Central squad.
“Going in, we knew we were young and inexperienced,” said Grand Haven head coach Mike Farley. “Lots of these kids have never had the opportunity to be in a game like this. It was really good for us.”
Trailing 14-10 with less than three minutes remaining, Grand Haven put together a game-winning drive that puts the squad on a fast track toward a fourth-straight playoff appearance. Starting from its own 36, Bucs’ senior quarterback Michael Penland, who watched last year’s starter, Scott Staal, pile up school records, got a chance to shine. He went 5-for-8 on the drive and connected three times with senior wideout Jeff Olson, the game’s leading receiver.
On the final play of the drive, Penland threw a 4-yard dart to a slanting Jake Lovett for the game-winner. Teammate Ryan Mcguire knocked home the extra-point to provide the final result.
Central kicker Jake Gorter’s 46-yard field goal attempt with 6 seconds left sailed just left.
“I thought Mike had a good night all-around,” said Farley of his senior signal caller. “He made some really big throws. I liked how he bounced back after getting intercepted. He didn’t quit.”
Penland finished the game with 14-for-31 passing for 184 yards, two TDs and one interception.
Penland helped get his squad get on the scoreboard on the team’s first possession, capping a five-play drive across 47 yards with a beautiful 29-yard pass to junior Isaak Newhouse, who soared higher than the Trojan defender to snag the TD toss.  Mcguire added the extra-point to make it 7-0.
While Central looked lost on both sides of the ball, the Bucs displayed confidence on their second possession, driving 50 yards in eight plays, down to the Trojan 18. But penalties stymied the possession and Mcguire put his team up 10-0 with a 35-yard field goal.
But then the script got switched.
Near the nine-minute mark of the second quarter, the Bucs fumbled deep in their own  territory, giving what had been up to then a confused Central offense new life at Grand Haven’s own 19. Three plays later, the Trojans’ senior quarterback TJ Schepperly ran a bootleg around left end for the 12-yard score.
Meanwhile, after the’ explosive start, the Bucs’ offense suddenly looked mired in mud, going punt, fumble, punt, punt, interception, punt, punt, punt and punt over their next nine possessions.
Central took advantage of Grand Haven’s woes, pinning the host deep most of the second half and forcing the Buc defense to defend a short field. The dam finally broke with 5 minutes left, as Central, starting from Grand Haven’s 31, drove in the go-ahead score, a 1-yard blast by Schepperly, to make it 14-10.
Farley was impressed with the way his squad pulled out the win and was glad to get the ‘W’ while also giving his players the thrill of a come-from-behind victory.
“It puts the kids into a pressure situation and forces them to play four quarters,” he said. “Hopefully being in a situation like this will help us down the road. We know where we have to get better.” 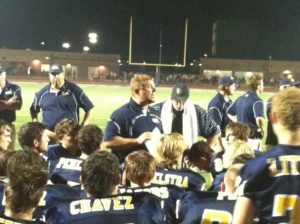 The Bucs’ Cody Jonas led all rushers with 48 yards on nine carries, while Schepperly led the Trojans with 25 yards on 11 carries, while also finishing with 12-for-25 passing  for 120 yards and one interception.
Olson was the game’s leading receiver, hauling in seven catches for 103 yards.
Traverse City Central’s Drew Reamer finished with 68 yards on six catches.
Newhouse and Matt Mulcahy led the Buc defense with six stops each, with Newhouse adding an interception in the win.
Next Thursday, Grand Haven travels north to take on Traverse City West.

Big Reds pull away In the second half, advance to state title showdown with Detroit King