When it comes to March Madness, this one was, by far, the best of them all (Opinion)

March Madness 2013 will go down as the maddest of them all, at least in my book. 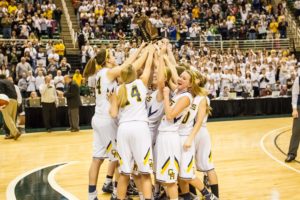 I witnessed 13 games – seven girls and six boys – and without a doubt, this was the best collection of tournament games I have seen in my 33 years of covering high school basketball tournaments.

It didn’t start out so grand when I saw a girls district game decided by 39 points, but after that … look out.

I did have to sit through my son’s district loss on the first night of the boys tournament so that was definitely a low light. That was a Monday night game and the first of five games I would witness that week.

The following night found me in Hudsonville, where Muskegon Catholic seemed poised to make a long tournament run. However, a battle-tested team from Fulton had other ideas and defeated the Crusaders by nine points, 51-42. 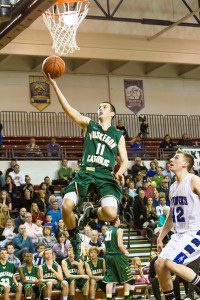 The following night, in Holton, I saw Coach Rick Zoulek’s team come in prepared for a fight with Montague in a Class C district semifinal game. The Tigers got off to a strong start, led by junior Jason Beckman, and ran over the Wildcats 83-71. Are Zoulek’s team ever not prepared for a big game?

On Thursday night, I was on the road to Grand Rapids Northview for another Grand Haven girls game. That was a good game as well with Grand Haven eliminating league foe Grandville 36-26. That game was tied, at one point, at 16-all. Cole dominated the inside and kept the Bucs undefeated season going.

I stayed a bit closer to home on Friday night with a boys district title game at Orchard View. Whitehall came in with a rather lackluster record, but had been playing some solid basketball under Coach Nate Aardema. In the late going, the Vikings fell to Spring Lake, which won its first boys district title since 1995.

Then came last week, which was even better than the week before.

With little time for the teams to rest, it was right back at it on Monday for the regional semifinal.  I headed north to Fremont, where the Sparta Spartans hung on for a 49-48 victory over Bill Core’s Spring Lake Lakers. That outcome wasn’t decided until the final buzzer.

I followed the Muskegon Catholic boys to Grandville for a third matchup against league rival Tri-unity Christian on Wednesday night. The Defenders had made quick work of the Crusaders in two previous matchups during the regular season. My son Alex and I went over and made our predictions as we pulled into Grandville. Neither of us gave MCC much of a chance of staying within 15 points.

The Crusaders had other ideas and battled the Defenders for 36 minutes before falling 56-53. A 3-point shot at the final buzzer in regulation by Tri-unity prevented MCC from advancing to the Class D quarterfinals.

On Friday, it was east on I-96 with the final destination being the Breslin Center on the campus of Michigan State University. Grand Haven and Westland John Glenn in the Class A girls semifinals.  Another great game in which Grand Haven remained undefeated with a 55-46 victory and a return trip the following day to battle for a second straight state title.

It seemed the entire city of Grand Haven made the trek to the Breslin on Saturday. The Grand Haven students had the Breslin rocking from start to finish as the Bucs surged into the lead. However, Grosse Pointe South battled back and forced overtime.

In the extra 4-minute session, Grand Haven jumped into the lead and won 60-54. Another great game by anyone’s standards.

Then came Tuesday night and a trip to Rockford High School. Could the Muskegon Big Reds advance to the state semifinals for the first time since 1942? It sure looked like it after a solid third quarter pushed Coach Keith Guy’s team into a 12-point lead.

However, the Grand Rapids Christian Eagles had other plans and turned up the heat, forced turnovers, made some shots (including free throws) and eliminated the  Big Reds 64-61.

And there you have it. A total of 13 games in 22 days and worth every mile I put on the old Chevy Impala.

The last three weeks showed me how much hard work these high school players put into their sport. How much the coaches prepare their teams for the pressure cooker known as March Madness and the fans who turn out in droves to support their teams.

No, there is nothing quite the magic of March Madness.