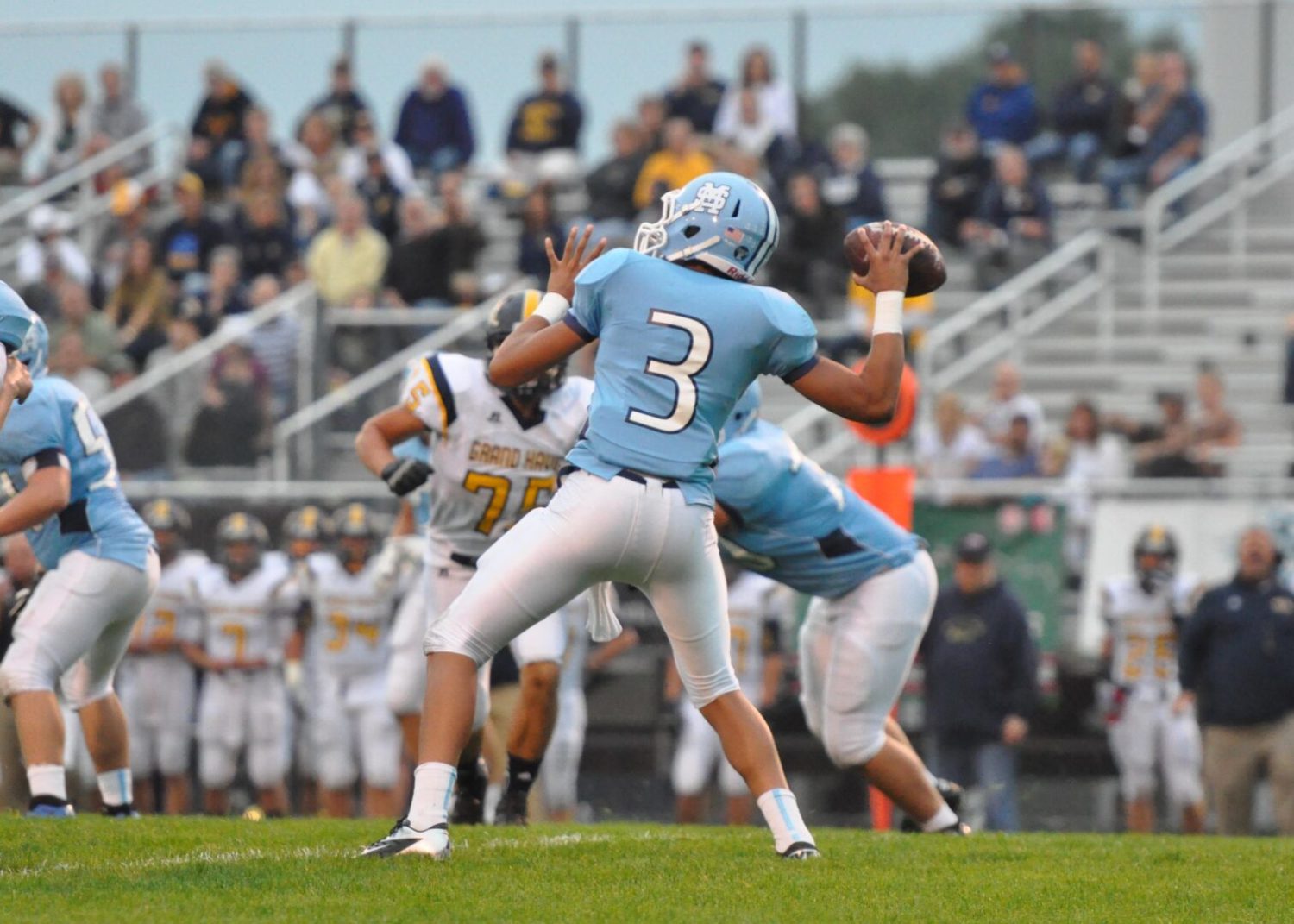 MUSKEGON – While trying to equal a part of its school history Friday, Mona Shores was also trying to take a step closer to making history this year.

It wasn’t easy as the Sailors had their hands full, but were able to hold off visiting Grand Haven, for a 42-35 nonconference win, improving to 4-0 on the season in the process. 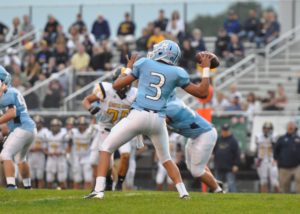 The victory equals the best start in school history, matching the 1980 squad. It also moves the Sailors closer to accomplishing what every other West Michigan team has but they haven’t – reaching the playoffs.

The victory celebration for the Sailors was put on hold more than once by Grand Haven (1-3), who continued to cut into whatever lead Shores could build.

Trailing 28-14 at halftime, the Bucs recovered a Sailors fumble on the second play of the second half, and five plays later, Abe Westerman punched it in from a yard out.

Up 28-20 starting the fourth, Mona Shores looked as if it would pull away again, as quarterback Tyree Jackson stood in the pocket, took a big hit and delivered a deep pass to Asantay Brown. Brown stopped running, came back for the ball, made the catch and sprinted to a 31-yard TD reception.

But the Bucs would again strike back, cutting the lead down to seven as Karl Johnson would find Jacob Kostner for a 85-yard touchdown.

“You have to give them credit,” Koziak said. “We’d jump out and they’d fight back. But hats off to our kids too, our kids could have folded up, but nope. I’m very proud of them.” 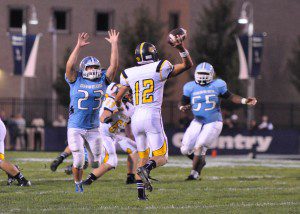 Mona Shores responded with a  eight-play 56 yard scoring drive topped off by Jackson rolling in from 10 yards out and a 42-28 lead.

But, again, Grand Haven responded. Much quicker this time.

Chase Pego took the ensuing kickoff at the five, sprinted down the right sideline, broke away from a Sailors group tackle at the 30, and sprinted back across field and to paydirt for a 95-yard score and a 45-38 deficit.

“I finally felt pretty good (about the lead) right before that kickoff return,” Koziak said. “We scored and I thought even if they went down and scored they’d take time off the clock.”

Instead, Shores had to convert two third down plays to run the clock out, the second one coming on a 3-and-1 pass from Jackson to Brown for 10 yards.

“That was the biggest thing,” Grand Haven coach Mike Farley said. “Third down conversions and turnovers were costly. Both teams had turnovers, but third downs? They made them and we didn’t.”

The big-strike offense of Shores was set aside early on, as the Sailors used a nine-play, 57-yard drive on its opening possession to take a 1-0 lead on Brown’s 1-yard score.

The Bucs answered on its ensuing drive as Johnson hit Ryan Maguire on an 82-yard TD strike.

Grand Haven’s defense would stop Mona Shores on its next drive, making a goal line stand at the 1. Unfortunately for the Bucs, the offense couldn’t move the ball and a short punt set the Sailors up at the GH 36. Two plays later Jackson would find Hunter Broersma for a 30-yard score and a 14-7 lead after one.

Broersma would score on runs of 2 and 6 yards to put the Sailors up 28-7 in the second quarter, before Johnson’s 9-yard TD run cut the lead in half at halftime.

“We needed that, we wanted to win,” Brown, who finished with eight catches for 144 yards, said. “We’d shut them down but they came back. We executed but we have a lot of work to do.”

The Sailors finished with 446 total yards of offense, 246 on the ground led by Broersma with 68 yards on eight carries. Jackson added 65 yards on 14 carries while passing for 200 yards on 13-of-21 attempts.

Grand Haven had 326 total yards with Johnson passing for 216 of it on 8-of-17 passing. Kostner had one catch for 85 yards and Abe Westerman rushed for 37 yards on seven carries. Dakota Juarez led the defense with 13 tackles, Cody Jonas and Westerman had 11 each.

After a rough 2018-19 season, Fruitport girls basketball squad off to a strong 4-1 start 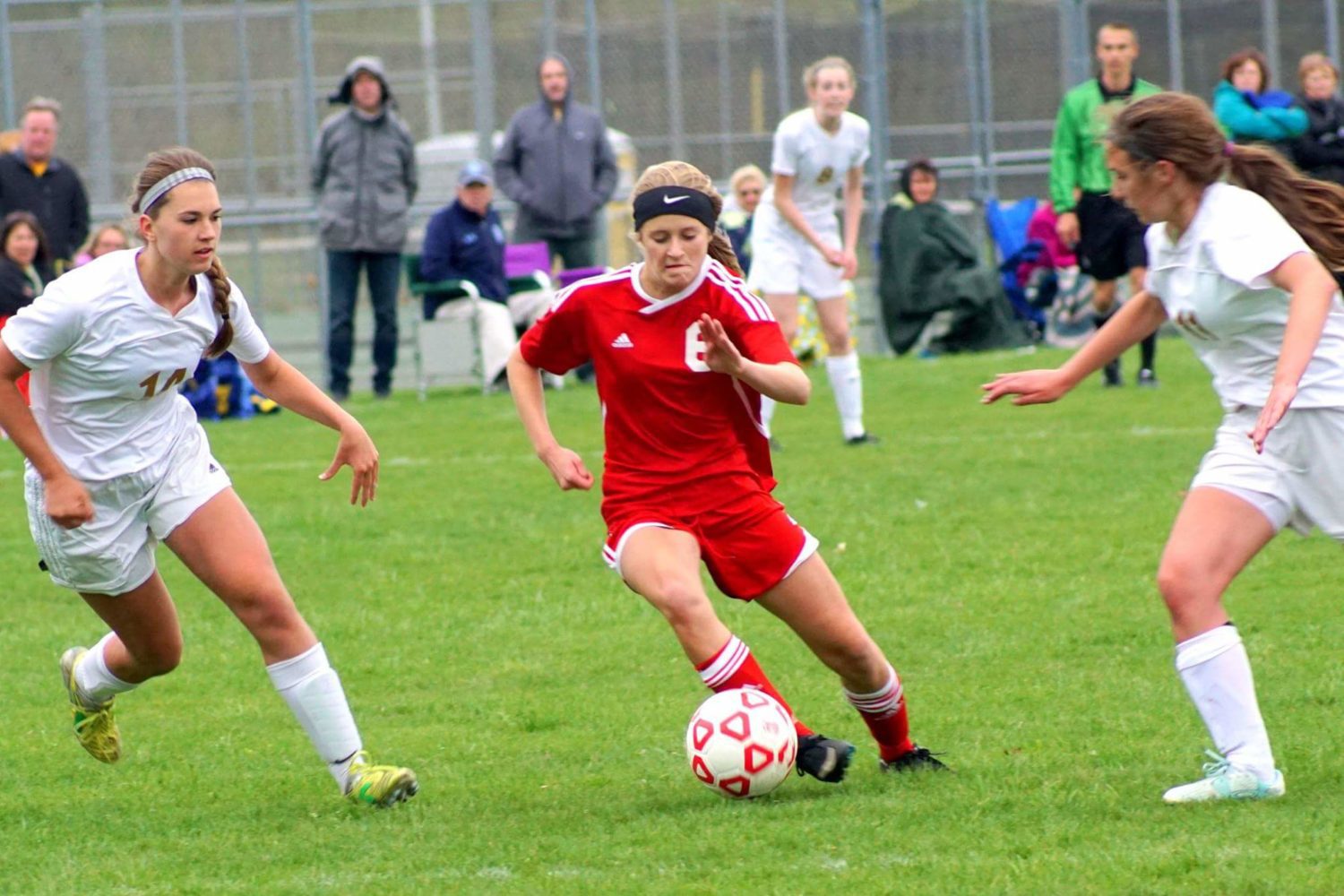