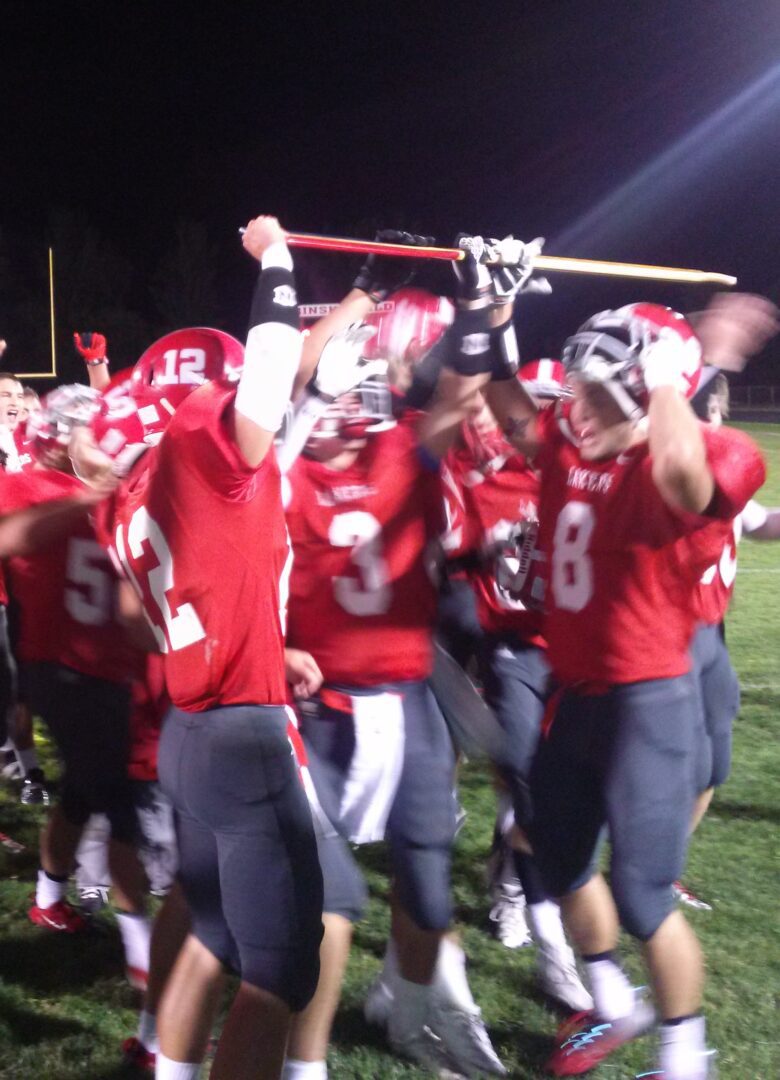 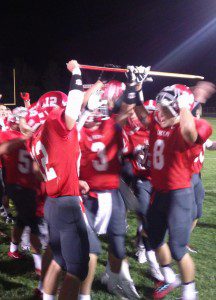 That Laker defense pitched a shutout and that led to a 10-9 victory over the Trojans. And when the final buzzer sounded, the Lakers, their fans and their cheerleaders celebrated on the turf at Grabinski Field.

The only points for the visiting Trojans came on an electrifying 88-yard kickoff return by Austin Curtis on the game’s opening kickoff. And in the fourth quarter, the Lakers opted to take a safety instead of risking a blocked punt while pinned on their own 2-yard-line.

“I think defensively, we had our kids in the right schemes and in the right position to make those plays,” Laker coach Jerry Rabideau said. “Fruitport is a very, very respectable football team and it was one of those situations where we had to make plays.”

In the early moments of the game, the Trojans got on the board even before many of the standing-room-only crowd had found a place to sit or stand. Collin Cribley added the extra point and just 15 seconds into the game, Fruitport had the lead.

“I can’t tell you, but you’d have to go back and look at how many times a Fruitport-Spring Lake game started like that with fireworks out of the game and then it was a defensive battle after that,” Fruitport coach Greg Vargas said.

It stayed that way until the opening moments of the second quarter when the Lakers finished off a drive. It took 12 plays and 71 yards, highlighted by a 16-yard run by Chase Slagboom, an 11-yard run by Jakob Frederick and a 10-yard pass from Mark Williamson to Warber. The Lakers got to the Trojan 10 when two flags (roughing the passer and unsportsmanlike conduct) put the ball on the 3. From there, Warber ran into the end zone and Ross added the PAT.

Slagboom was also a Fruitport driver killer with three interceptions.

But it was the clock that halted the Trojans chance to take a lead into halftime.

With 1:18 remaining in the second quarter, Fruitport’s Mitchell Reyes picked off a halfback pass by Warber and ran 27 yards to the Spring Lake 41. Derek White appeared to have a 41-yard touchdown run down the left sideline, but it was brought back because of a block in the back.

Still, the Trojans were able to move down the field and reached the Laker 2 after a pass from Luc Kostamo to Jason Carmean. After Kostamo spiked the ball on first down, it left 4.8 seconds on the clock. Kostamo’s quarterback sneak was stopped short of the end zone and the clock ran out.

Slagboom had a long kickoff return to start the second half come to an abrupt halt when he fumbled and Fruitport’s Austin Fialek recovered. The Trojans could not sustain a drive after that big play early in the third quarter.

With 5:15 remaining in the third quarter, Ross lined up for a 40-yard field goal, but it landed short.

He got another chance minutes later after Spring Lake’s Sawyer Smith recovered a Trojan fumble on the 20. Four plays later, Ross nailed the 37-yard attempt to give the Lakers a 10-7 lead.

Early in the final quarter, the Trojan defense pinned the Lakers back on its own 2. That’s when Rabideau instructed his punter to step out of the end zone for a safety to make it 10-9.

Fruitport took over on the 50 and drove down to the 17, and on fourth down, attempted a 35-yard field goal that sailed to the left. Another drive that produced no points.

“It’s something we’ve been struggling with since Week 1,” Vargas said. “Not being consistent on the offensive side of the ball. The kids are working extremely hard and playing hard, but we can’t put those consistent drives together.”

With time running down in the final quarter, Williamson broke loose for a 47-yard run that moved the Lakers from their own 36 to the Fruitport 17. Four players later, the clock ran out and the Lakers celebrated a hard fought victory over not only their Lakes 8 rival, but their neighboring rival.

“Defensively, it was a big game,” Rabideau said. “It was not a pretty victory by any means but it was a great gridiron football game.”

And now the Lakers own the wooden oar for at least the next year.

“We love it, we will honor it, we will accept it and I’m sure our kids in the hallway will have great pride in it,” Rabideau said.