SHELBY – No one could blame you if the first thing you think about when someone mentions Shelby High School is basketball.

Hoops and wrestling, maybe baseball too, and softball. 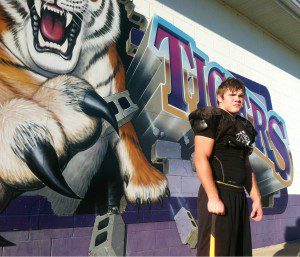 After decades of being a league doormat, the Shelby Tigers have, through hard work and a change in attitude, gradually shed the creampuff image. It started with the arrival of Head Coach Lorenzo ‘Zo’ Rodriguez in the mid-aughts. Taking a team that had just three winning years over the previous 15 seasons, Rodriguez’s brand of set-you-up offense and bruising defense have given the squad six-straight winning campaigns and three-straight playoff appearances, culminating in last year’s 10-3 season that ended at the Div. 6 state semifinal game versus Ithaca – a team that has put together a 42-game win streak, won three-consecutive Div. 6 state titles, and currently sport a 5-0 record, the same as Shelby.

Last year, Shelby certainly tested the Yellowjackets in the semifinal game, a 31-14 defeat that slipped away from the Tigers in the final quarter.

This year, the team is aching to go beyond last year’s result.

The reason for the change in attitude and expectations at Shelby becomes clear when you see how Rodriguez runs his operation. Both relaxed and driven, Rodriguez emits the energy and certitude of purpose any young coach – pulling together a football team in rural town known for basketball – needs to have if he or she has any hope of turning the tide toward his or her sport. It’s as demanding as any head football coaching job, but with the added pressure of improving each year, lest all that progress and momentum is lost with a poor season.

And yet, Rodriguez appears to be having the time of his life. 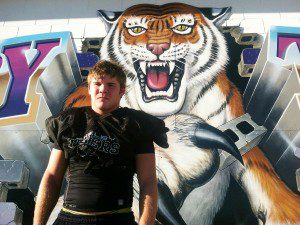 For instance, he utters something that would have seemed plain silly just a few short years ago. Only, nowadays it’s no longer all that farfetched.

“We won’t be happy until we win a state championship,” said Rodriguez matter-of-factly, and yet with a small smile on his face. “That’s the goal here now. I don’t want to sound boastful or cocky, but if we don’t talk about our goals, we won’t really believe them. I want them to talk about it, and I want them to believe it.”

Of course the goal of any budding organization looking to advance past its initial potential is to get its members to believe they can go further than what they thought at first possible. To do that, the organization’s leader must find those folks who can adequately transmit a new attitude and a new set of expectations. Often those early teams must preserve without gaining any immediate reward. It’s no better, though, for the kids who have tasted success and now must adhere to the new standard, must live up to the hype.

A true believer in what Rodriguez is preaching, Courtright is the epitome of his coach’s ‘build now for something better tomorrow’ philosophy.

“We’re definitely building something here,” said Courtright, a 3.5 GPA student who, contrary to his imposing stature on the gridiron, also enjoys playing guitar and drawing. “And with putting so much into it, I want that tradition to continue. We all have a stake in what happens here after we’re gone.”

For Rodriguez, kids like Courtright are essential to his winning mission.

“Forest is just a natural-born leader, and he does what he does by example,” said Rodriguez. “He’s vocal about it too; he makes the calls on defense, and you can tell he commands the huddle and runs the defense to a T. He plays both ways the same way. He leads with his voice in the huddle and then leads by example on the field.” 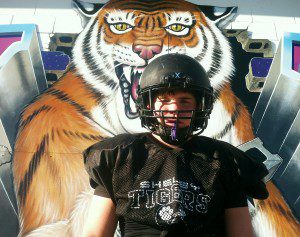 Rodriguez said Courtright has an excellent feel for the game and plays with great instincts. Though he stands just 5-9, up close Courtright seems much taller, a kind of Brian Urlacher type who plays much bigger than his size.

“Once the ball is snapped, if Forest isn’t within two feet of the ball, you know there’s something going on, something’s wrong,” he said. “Either he’s injured or…well, that doesn’t really happen because he prepares his body so well in the offseason. He’s everywhere on the field, making tackles, in pass coverage, tracking down runners and blowing up blocks. He is someone with the instincts to always seem to know where to be on the field. The kid is all over the place.”

If you followed Shelby the past few years, Courtright’s play definitely resembles the play of a former Tiger. Courtright’s big brother, Mason, who led the Tigers in 2011 to their first playoff appearance in a decade, played the same positions the same way as Forest.

“I try to do everything just like him,” said Forest. “Why? Because what he did worked, and it’s worked for me and our team.”

Certainly, Rodriguez is glad to see the similarities.

“His brother was the same way,” said Rodriguez. “Mason wasn’t quite as vocal as Forest. But that’s maybe the only area where they’re different. But both, once they step on the field, you know they are ready to play. Both work incredibly hard, and their teammates see this and follow them.”

The bridge from older to younger brother is key to Rodriguez’s plan.

“The guys we’ve had in the past, guys like Mason and now Forest, those kids are the real building blocks of this program,” said Rodriguez. “We’re where we are today because of those guys, the ones who were willing to lead by example. When you’re trying to build something like a football program, it takes a whole lot of guys, and a whole lot of teams, who were willing to lead by example and understand things like this take time to build. You hear me thank those kids every time they come back here for a game or something. Those guys said, “We’ve never been a good football program so let’s change that.””

Once the train got rolling, Shelby’s change has been swift. What in the past would be considered an easy win over the Tigers, this Friday’s game against undefeated Oakridge features the two best teams in a conference many consider the best small-school league in the entire state. The winner should be able to lay sole claim to the conference title.

Rodriguez said his team is excited to settle the conference race on the field of play. 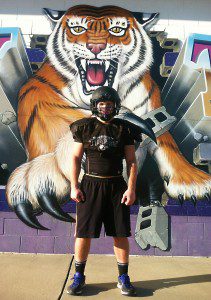 “Our kids have prepared all offseason for this,” said Rodriguez, whose team is looking to avenge last season’s 20-9 loss to the Eagles. “You walk into our weight room, you see their name all over the place. Last year, the kids understood we were there in the end. This year we want to make that happen, get that win and get over that hump. But Oakridge isn’t going to hand us anything. We’re at their place, so that just makes the goal all the more difficult.”

If one is too quick to think the Tigers won’t survive the Eagles’ ruckus home-field environment, it should be pointed out that Rodriguez’s lone win against the Eagles was on Oakridge’s home turf, a 27-22 victory in 2009.

“We know it’s possible and we know we are very capable of doing it,” the coach said. “We just need to make sure we play four quarters of football because (Oakridge) will. We’ve got to eliminate mistakes, because every single time you make a mistake against them, they’ll make you pay. They’re so fundamentally sound. They’re not good at what they do; they’re great at what they do.”

Courtright said he and his teammates are chomping at the bit to face Oakridge.

A win over the Eagles would complete the Tigers’ campaign to avenge one of two regular-season losses they suffered in 2012. The first was a dominating 33-7 victory over Montague, a team that last year got the better of Shelby 22-15.

Then there’s that playoff loss to Ithaca. 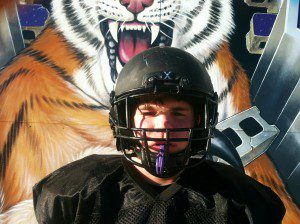 “Every playoff game is tough,” said Courtright, “because the playoffs are full of the best teams. That’s all that are left. We know that, but I feel, we all feel, we can do as well or better than last year. I would love a rematch with (Ithaca).”

Win or lose, the Tigers are definitely on an upward trajectory, beyond just fielding a good team a season or two. Rodriguez and his Tigers want to be in the mix every single year.

“The idea has never been just to have a good team or one good year,” said Rodriguez. “The goal has always been to build a good program. Teams come and go; good programs need consistency. That’s what we’re trying to do.

“We’ve built a family here and we’re going to be a family until the day we die,” Rodriguez continued. “That’s just the way it is. Our saying is ‘Once a Tiger, always a Tiger.’

For Courtright, he is part of an unbroken chain that he’d like to extend well into the future.

“When I got to high school,” he said, “I saw the upperclassmen really pushing each other and the lower classmen to lift weights, to get in there and do the extra stuff. Now that’s the stuff I’m doing, getting the younger kids to get into the weight room and putting in the work it takes to win every year. We are all in this for the long haul. We’re not going anywhere.”

Not much separation between Holton, Kent City baseball teams in doubleheader