Muskegon Catholic’s Ian Tyler is no fool, on or off the field [video]

MUSKEGON – Everyone is busy.

But there’s busy, and then there’s BUSY. 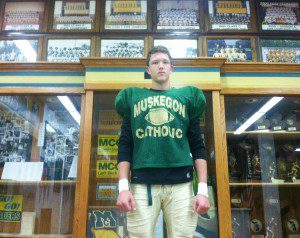 Muskegon Catholic Central’s Ian Tyler definitely qualifies as the latter. The senior tight end/defensive end/linebacker not only starts both ways, not only plays two other sports (basketball and baseball), not only is a creature of the school’s weight room, and a consistent attendee of a plethora of summer skills camps…

In Tyler’s case, we’ve only just scratched the surface.

While the Crusaders’ football success is legendary, Muskegon Catholic’s scholastic success actually is a little understated. Academic success abounds West Michigan, and yet the performance of MCC’s student body is comparable to the area’s best public schools, even surpassing them in many areas.

That’s Ian Tyler, tops in his class, heading to an Ivy League school to play football next fall.

“He’s an extremely hard worker,” said first-year Crusader head coach Steve Czerwon regarding Tyler’s extraordinary performance on and off the field. “He’s a hard worker in athletics and he’s a hard worker academically. Anytime you’re first in the class at Muskegon Catholic, well, it means something at a school of such high achievers. They put the time into being the best, and that’s really what Ian’s done.”

Don’t let Tyler’s cerebral presence fool you, though. When the kid suits up and takes the field, expect to see his less mannered side emerge.

Take a look at the clips below. These are Tyler’s highlights on the field across the first four games of the 2013 season.

Tyler has an offer to play football at Columbia, and is waiting on offers from Yale and Harvard. He’ll decide where he’s going next fall within the next few weeks.

Having a kid of Tyler’s athleticism and intelligence has its advantages.

“He’s one of our most versatile guys,” said Czerwon. “He can put his hand in the ground at defensive end. But he’s also the guy we can walk out on our 3-4 (defense) and play in some space. Because we have a player like Ian, we can fluctuate between our four-down defense and our three-down defense. We don’t have to run another guy in when we switch, so it just gives us that much more flexibility.” 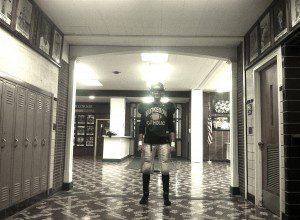 Like lots of kids at a small school, Tyler didn’t appear at first to be much cut out for football.

“For a long time, he was quite frankly a really skinning kid,” said Czerwon. “But early on, he dedicated himself to the weight room. Now he’s probably our second-or third-strongest guy on our team. He was a kid who really realized how much getting into the weight room would benefit him.”

It doesn’t hurt that Tyler has since filled out quite a bit. Take one look at his frame and any college coach can see a few years in a college football weight room will really put some meat on the kid.

Like lots of kids before him at Catholic, what Tyler lacked in size he made up for in effort. And what drove that effort is MCC’s long tradition of strong teams filled to the brim with hardworking, high-character players.

“As a young kid,” said Tyler. “I always looked up to the football team. I remember the ’08 team when they made it to Ford Field, and they were out there practicing in a foot of snow with two sweatshirts on. I looked up to them, for sure. The big football players, you always want to be one. Now that I am one of them, it’s pretty cool.”

But ‘being one’, while also playing two other sports, and while also maintaining a high grade-point average to boot, is no easy feat.

“It’s definitely tough,” said Tyler. “A lot of times I’ll have basketball practice after school, and I’ll lift before school, or maybe after practice; it’s always a grind. Playing three sports, all your seasons are covered. You’re always busy, but being busy isn’t always a bad thing. That’s how I look at it.

“I like to take a lot of pride in doing well in school,” Tyler continued. “It’s the reason I’m able to play next year in college. Sure, I end up losing a lot of sleep over it, staying up all hours of the night getting everything done. We have a long tradition here of great football teams and great academics. I’m proud to be able to uphold both traditions.” 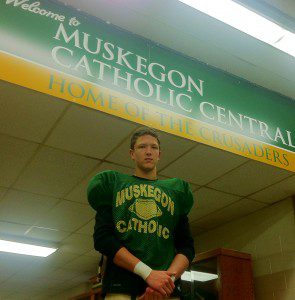 Indeed, tradition is an almost physical, tangible thing at Catholic, something that becomes clear with just a cursory look around the MCC campus. Tyler said it is the various coaching staffs and teachers that provide a vital link in the school’s continued success.

“With all the great teams we’ve had here,” he said, “you have to look at the coaches we’ve had leading those great teams. It means that everybody knows that if they put in the work, we won’t always get the results we want, but we’re going to give ourselves the best chance of reaching your goals. It’s the same with academics.”

And while the numerous displays of athletic and academic prowess spread throughout the school can give one the feeling that ‘everything’s been done before, and has been done better for that matter,’ teachers and coaches at MCC are fairly skilled at letting each kid, each team forge their own ways toward success.

At the team meeting before the first practice, the coaches ask the players what kind of team they want to have, what kind of legacy they want to leave. While it is true that nearly every team that ever existed, at least in word, stakes at the start of the season a claim to a state title, these team meetings at Catholic have the added weight of actually presenting a state title as a realistic goal. But each team is going to have to decide how they are going to get it done.

It’s a great way, said Tyler, of letting the team set its own trajectory while also impressing upon them the hefty expectations of every Crusader team.

This year’s squad knew its identity wouldn’t be fully formed until later on down the line. Everyone knew the team’s first two games, versus rivals Mona Shores (Div. 2) and Grand Rapids Catholic Central (Div. 4), were going to be tough. Yet, although the Div. 8 Crusaders lost both games (by a combined 12 points), few in Crusader nation needed to worry about the 2013 campaign. Since starting 0-2, the squad has reeled off six-straight wins, outscoring opponents 312-29 during that stretch, and earning its 24th playoff berth in 36 tries.

“The last six games, we’ve really got things rolling with some big wins,” said Tyler. “Now that we’re in the playoffs, we are exactly where we want to be. The goal is always to play in Week 10.”

Rather than ending with a playoff berth, the goal at Catholic of getting into the playoffs is just the start of things – the program has won eight state titles, and made it to 11 state finals games.

But before that 24th playoff appearance can commence, there is some unfinished business this Friday in the regular-season finale versus 5-3 Traverse City St. Francis.

“Anytime you play on Friday night, it’s an opportunity you have to take advantage of,” said Tyler. “That’s even more so against a team like us. We know the St. Francis game will be tough and physical (game), so we definitely want to come out on top in that one.”

According to Czerwon, Friday night’s game will be a throwback of sorts, featuring two teams with what some may call a more-traditional approach to the game.

“It doesn’t seem too many teams just line up and come at you anymore,” said Czerwon. “They want to get their kids the ball quote/unquote out in space. That’s fine; that’s just the norm nowadays. St. Francis will be the first team we’ve faced all year that plays a lot like we do. They’re going to work downhill, they’re going to expect their backs to block – most teams don’t expect their backs to block very much anymore except on the perimeter. You know it’s going to be just two team who really understand the physicality of football. That’s what you’re going to see on Friday.” 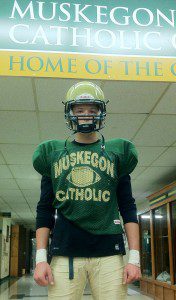 Czerwon has noticed the teams that have given St. Francis the most trouble this season (a three touchdown loss to Div. 8 New Lothrop and a two-score loss to Saginaw Nouvel) were speed teams. Lucky for Czerwon, his squad has power and speed.

“We like to think we combine some speed with some physicality,” laughed Czerwon. “We think we can do them both pretty well.”

Health, which is always pretty important at a small school like Catholic, has remained remarkably positive for the team so far this year – though starting corner Zach Winzor was lost this season to a broken collar bone. Nevertheless, lest you think the Crusader offense is just a one-man show – senior Alex Lewandoski is the feature back – junior QB Nick Holt and junior running back Tommy Scott will rob you of that notion pretty quickly. The fact is, even with a small roster, the Crusaders are diversified enough to withstand a couple injuries.

Tyler and the rest of the 2013 squad have a unique perspective in that they’ve played under both recently retired and Hall of Fame coach Mike Holmes, who stepped down last season after 25 years and over 200 wins, and Czerwon.

“Coach Czerwon was already here learning from Coach Holmes forever, so a lot of stuff is the same,” said Tyler. “But, they are two different people so they are going to have different coaching tendencies. Coach Holmes was more quiet. He was a great motivator without needing to get up in your face. Coach Czerwon is a little more hands-on. He’ll put you in your place; he’ll get after you if you screw up.”

Not surprisingly, Czerwon hasn’t had much time to think about the transition.

“In this job, you’re day-to-day oriented,” said Czerwon. “My job is to plan for the next practice and have a plan of something that’s going to work. So I haven’t had a lot of time to sit back and reflect and evaluate it. For all the coaches, we’re just focused on getting the best out of our team the next day at practice and then at the next game. Is it something that is enormous? I don’t know. It’s a job that you go to and try to do the best that you can. As a first-year coach, that’s what it looks like to me.”

But, of course, for players like Tyler, it’s so much more than that.

“I want to go to (an Ivy League) school because I want to get the most out of the (college) opportunity,” said Tyler, “just like I’ve been able to do here at Catholic. Getting a chance to play college football too, that makes it all even better. But I have to think of life after college and an Ivy League degree will help with that.”

Because, though it might not look like it from the outside, at Muskegon Catholic Central, there’s always life after football.