SHELBY – Nobody said it was going to be easy. 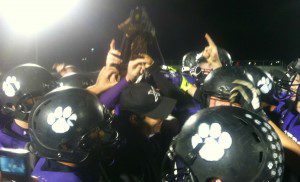 Shelby players and head coach Lorenzo Rodriguez celebrate with the district title trophy, the program’s second in as many years. Photo/Mark Lewis

Grandville Calvin Christian Friday night, it wasn’t easy at all.

For the second week in a row, Shelby went into the locker room at the half down only to emerge in the second half renewed enough to snatch victory away from what could very well have been a defeat.

Last week, the Tigers were trailing 17-14 to Montague before settling in for the 35-23 win.

This week, the team trailed 10-8 at the break before exploding for 15 unanswered, second-half points, and providing a pretty gutsy defensive effort to boot, and get the 23-10 victory along with another Div. 6 district title.

This is the second year in a row the Tigers have won a district title.

Shelby (10-1) now moves on to host a likewise 10-1 Schoolcraft squad for the regional crown.

This is big stuff in Shelby, as the team suddenly has risen to that level where other teams fear it instead of the other way around. A win next week gives the Tigers two consecutive regional trophies, in an already jam-packed Shelby trophy case.

This winning big games thing is starting to become routine.

“We earned this,” said a jubilant Shelby head coach Lorenzo Rodriguez, his team imploring him to join him in a team picture with the title trophy. “We play Class B teams to earn these points and that’s why we’re hosting another playoff game.”

But before Schoolcraft could enter, the Tigers needed to dispense with the Squires.

And dispense with they did

“Shelby just wore us down, I think,” said Calvin head coach Tom Hochhalter. “They overpowered us. I think it became pretty evident as they game went along. We were spent.”

But things look promising for Calvin, at least at first.

Calvin got on the board first, taking their third possession 60 yards using a vast array of running and throwing plays that put the Tigers on their heels. Utilizing for its linemen a wide-split approach, Calvin was able to spread out the Tiger defenders, slowing down Shelby’s pass rush in the process. Squire QB Austin Heeres took advantage of his linemen’s very wide splits, which helped to funnel Tiger defenders into various lanes, particularly on an A-gap option play that Heeres used to collect the vast majority of his team-high 84 rushing yards.

Heeres’ impressive play caused the Shelby coaches to adjust. They decided they would shoot the gap between the Squires’ wide splits and cause their linemen to come out of position in order to stop the gap shooters.

“We started lining up our guys with inside technique in the gaps,” he explained. “And then we were able to shoot the gaps. Now they’re chasing us in the gaps. We changed up our nose in the middle; we put a little quicker nose(guard) there,” referring to Dylan Unger, who usually plays in the defensive backfield.

At the same time, the Calvin coaching staff surely noticed that Spring Lake was most successful against Shelby – in a surprising 28-0 regular season-ending Laker win – when they pressured the Tigers up the middle, up the ‘A’ gaps, those gaps of space at both sides of the center.

But Rodriguez  and his crew have adjusted too.

“We were able to play with our splits a little bit,” he said. “We were able to pin everything inside. We understood where they were coming with the pressure. We know that Spring Lake hurt us with the A gap pressure, and we’ve been working on it for the past two weeks. So, thanks to Spring Lake for opening our eyes to that.”

On the ninth play of the Squires’ opening drive, Heeres connected with Drew Zwiers on a four yard TD slant pass to make it 7-0.

While the Squires were driving at will, the Shelby offense looked stuck in the mud, appearing severely  out-of-sync as three of its first five possessions resulted in interceptions – one off the passing hand of Shelby running back David Guerra. The other two were punts.

That’s when the Tiger defense came to the rescue.

Following Shelby QB Andy Fortier’s second pick, the Squires took over on the Tiger 28, quickly driving to the one, just inches away from going up by two scores. But Shelby’s defense held, stopping the Squires four straight times from the two-yard line or shorter.

After sacking Heeres on the four on fourth-and-goal, the Tigers needed just two plays to take the lead. On the second play, Guerra broke free for a 75-yard TD to make it, following Fortier’s successful two-point conversion pass to Devin Mussell, 8-7 Shelby.

After another long drive down to the Tiger six-yard line late in the second quarter, Calvin’s Alex Comstock nailed a 24-yard field goal, giving the Squires the 10-8 lead.

Shelby ended the half with Fortier’s third, and final, interception of the night.

The interception fortunes soon turned in favor of the Tigers, as Mussell picked off a Heeres’ fourth pass of the second half – only after it bounced off teammate Kasey DeWitt – stopping a promising Squire drive right in its tracks. Six plays later, and keyed by an incredible 27 yard, finger-tip catch by Dylan Unger, on fourth-and-15 no less, Fortier ran it in the remaining two yards to again give Shelby the lead. Fortier ran in the two-point conversion as well to make it 16-10.

“That’s the stuff you see on SportsCenter everyday,” said Mussell, of Unger’s outrageous catch. “It creates a spark and that’s what we feed off of the rest of the game.”

Guerra picked off his first of two picks of the night early in the fourth, allowing the Tigers to put away the game with an eight play, 47-yard drive, capped by senior fullback Forrest Courtright’s one-yard blast to provide the final result.

“They made some good adjustments coming out in the second half,” said Hochhalter. “That’s kind of been their MO throughout the whole season. They are a second half team. They might struggle a little bit in the first half. But then they adjust and shut down teams.”

According to Mussell, the coaches’ adjustments were nothing compared to his team’s will to win.

“I don’t think there was any difference” between the two halves, said Mussell. “I think we just wanted it more. That’s what it came down to. We wanted it more.”

And yet, the senior back did learn something from the Squires.

“It’s a great learning experience for us,” said Mussell “It prepares us for almost anything. We’ve seen it all now. (Calvin’s) spread (offense), it just makes us better on defense. “

While the Tigers move on the wiser, Calvin Christian’s historic season ends.

From a team that started 0-3, then won their final six regular-season games, and then nabbed, last week, the program’s very first playoff win, Hochhalter said his squad exceeded everyone’s expectations.

“We weren’t picked to do very much at the start of the season,” Hochhalter explained. “Then we started out with three losses. But I always thought we had potential. But before we got it figured out, they fought together and then they came together. This team just said ‘This isn’t going to be the end of our season.’ They went on to break new ground, win seven straight and win in the playoffs. They were a great group of guys.”

Brody Lee led the Tiger receivers with one catch for 44 yards.

Heeres was 14-of-34 passing for 221 yards, one TD and four picks on the night. Troy DeGroot led the Squire receivers, hauling in four passes for 72 yards.

Defensively, Courtright led the way for Shelby with 13 tackles, while Unger added 11 stops and Julian Hernandez added 10 tackles in the victory.