MUSKEGON – When Zeeland East’s coaches watch Mona Shores film this week, they will probably wonder which Sailor offense they should prepare for:

The one that grabbed a 23-point lead in the first half against Kenowa Hills, or the one that sputtered in the second half and nearly allowed the Knights back in the game.

In the standings it doesn’t matter, because Mona Shores escaped with a 30-13 Homecoming victory over Kenowa Hills Friday night in the O-K Black Conference opener for both schools.

But Sailor Coach Matt Koziak knows his offense will have a play a more complete game next week when the Sailors visit Zeeland East, which beat Reeths-Puffer Friday.

“We couldn’t get our run game going and we couldn’t connect on a couple of passes,” Koziak said. “We’ve got to fix a ton of things, especially in our run game. 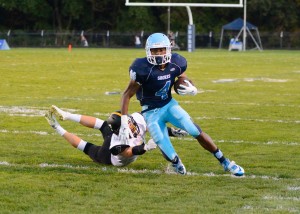 Darece Roberson (4) catches a pass in the flat and runs a tightrope down the sideline for the second MS touchdown. Photo/Eric Stirr

Luckily for the Sailors, the defense picked up when the offense stalled, stopping Kenowa Hills on several key drives in the second half to preserve the victory.

The biggest stop came with 33 seconds left in the third quarter, after Kenowa Hills had driven to the Mona Shores 11-yard line. The Knights faced a crucial fourth down with two yards to go when the Sailors’ Dom Shermeta came up with a huge quarterback sack to end the drive.

“The last four weeks our defense has been tough,” Koziak said. “We held Fruitport to seven, Rockford to 10, Caledonia to seven and gave up 13 tonight.

“Kenowa Hills is huge from (offensive) tackle to tackle, and we did great against their run game. I thought our defense played very well.”

The Sailors came out of the gate playing like the big favorites they were. 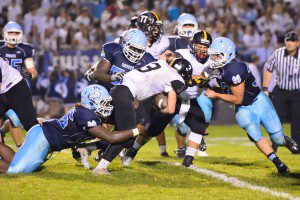 Their opening possession started on the Knights’ 42-yard line, and they only needed five plays to hit paydirt. DeOntay Moffett plunged into the end zone from two yards out and Jacob DeRemer added the extra point, putting Mona Shores up 7-0.

The Sailors opened the second quarter with a nine-play, 70-yard touchdown drive, culminating with a 24-yard scoring strike from quarterback Tyree Jackson to Darece Roberson. Another DeRemer extra point put Mona Shores up 14-0.

The game started to look like a rout later in the second quarter, when DeRemer hit a 34-yard field goal, then Roberson picked off a Kenowa Hills pass and returned it 24 yards for a touchdown.

But the Knights had some fight left in them in the second half.

Kenowa Hills was pinned at its own 10-yard line on its opening possession of the third quarter. But quarterback Jordan Marentette found Eric Orsinger with a pass at the 28, then Orsinger slipped loose and beat all defenders for a 90-yard scoring run.

Meanwhile, the Sailors sputtered on offense.

They drove to the Kenowa Hills 29 on their next possession, but lost the ball on a fumble.

They started another drive on the Kenowa Hills 44 but only managed to net two yards before punting.

They were trapped in their own end near the start of the fourth quarter, and a bad snap on a punt gave the Knights the ball at the Shores 35.

Kenowa Hills cashed in on that opportunity when Marentette completed a nine-yard touchdown pass to Connor Carruthers. The extra point was good, narrowing the gap to 23-13.

The Sailors got their final touchdown with 5:04 left in the game when Jackson found Matt Schuiteman in the end zone for a nine-yard scoring pass. DeRemer’s third extra point gave the Sailors their final margin of victory.

Jackson had a typically strong night through the air, completing 13 of 23 passes for 191 yards and two touchdowns. Moffett had 72 yards on 20 carries for the Sailors.

Schuiteman had five catches for 107 yards and one touchdown while Kobe Burse added two catches for 29 yards.