The Lakers (16-7) used a strong start to take control of the contest, outscoring the Broncos 15-5 in the first quarter. The early edge held up for Spring Lake, which led 27-16 at halftime and 38-28 after three quarters. 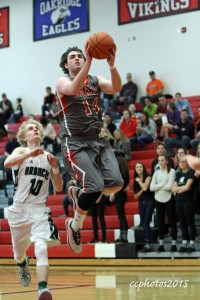 “I give our kids credit for showing mental toughness,” said Spring Lake coach Bill Core. “It has been a whirlwind of a week with losing to Catholic for the conference title then bouncing back to beat there tough opponents in districts.”

The Broncos were led by Nick Dekkenga with 17 points.

Spring Lake will face Newaygo in the regional semifinals on Monday night at Hamilton High School.