GRAND HAVEN — Nobody is taking the Grand Haven softball team for granted any more.

A good example of how the Buccaneers go about their business these days came on May 20 in the second game of a doubleheader against conference rival Rockford.

Grand Haven trailed the Rams 4-0 entering the fifth inning. In any other season over the past decade, that would have been a signal that the game was all but over, especially against a quality opponent.

But that game, like the rest of this season, was different for Grand Haven.

The Bucs rallied with a four-run sixth inning to tie the game at 5-5. The thrilling contest went to extra innings, where an RBI single from Audrey Boersen gave Grand Haven a 6-5 victory.

“It was so exciting,” said junior Jordan Buckingham, the team’s starting shortstop and one of Bucs’ top hitters. “We never had any doubts we could come back. We knew we just had to keep picking each other up and we kept on getting big hits.”

Grand Haven went on to finish the regular season with a sparkling 25-6-1 record, its first winning campaign in more than a decade. The Bucs finished second in the tough O-K Red Conference, behind state-ranked Hudsonville.

Now they will try to win their first district title since 2007 on Saturday. 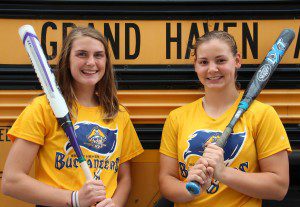 Grand Haven will open play against either Muskegon or Kewowa Hills in the first game of Division 1 districts at Mona Shores High School at noon. A victory would put he Bucs in the 3 p.m. title game against the winner of the Reeths-Puffer/Mona Shores semifinal.

Of course success in girls sports is hardly a novelty at Grand Haven. The Bucs brought home state championships in girls basketball in 2012 and 2013 and cross country in 2010. The volleyball team has reached the state finals twice in the past three years.

But for whatever reason, the softball team failed to attract the heralded athletes that shined in other sports, and as a result, the Bucs were consistently in the bottom half of the O-K Red Conference.

Again, things are beginning to change.

Second-year coach Paul Masko said the Bucs’ talented junior class is the first to grow up playing in the North Ottawa Youth Softball Association, which has turned into a quality feeder program for the Grand Haven JV and varsity.

“One of the big differences is, NOYSA has more talented personnel that are focused on teaching the fundamentals,” Masko said. “It makes a huge difference by the time they reach the varsity level.”

Masko has also played a pivotal role in meshing the talent at Grand Haven and getting the players to live up to their potential.

The 1989 Grand Haven graduate spent nine years coaching varsity baseball at Fruitport High School, until he resigned from the position to focus on coaching and watching his own children play sports.

Daughter Kylie Masko is a junior for the Bucs, and possesses a unique ability in the pitching circle.

“She’s ambidextrous, which is something she’s been able to utilize to her advantage,” Masko said. “She’s got a special glove for it and everything, so she can make a switch right on the spot. There’s no rules against it or anything, so she likes to (throw with both hands) when certain situations present themselves.

“It’s a skill that I noticed she had when we started playing catch in the back yard when she about five years old,” he added.

Kylie Masko is one part of a pitching staff that features four quality starters — all of whom are juniors. The others are Yogi Hang, Kaylee Hartwell and Boersen, and Masko said each brings a different skill set to the table.

Offensive depth is also a strength for the team, with three players hitting close to .500 — Buckingham, sophomore Mikayla Gronbeck and Hartwell, while junior Morgan Hill is hovering around a .400 average.

Grand Haven went 16-17 a year ago, but Masko said he could sense a breakthrough was coming.

“This season has gone exactly how I expected it to,” he said. “You could sense it at the end of last year and then just the maturity of the players. They began to feel they can compete with any team they come up against.”

Dedicated off-season training helped develop that mindset, and many of the players have gained valuable experience playing travel softball with the Michigan Sabercats.

“On Sundays (during the winter), the whole team would go through conditioning and do some throwing and hitting sessions,” Buckingham said. “On Saturdays, I’d do some work with my personal hitting coach, or go out with Mikayla (Gronback) and do some hitting on our own.

“We really made a bond to help each other improve. We really just tried to become the best players we could be.”

The hard work has already paid off. With the assurance of a long-awaited winning record now in their rear view mirror, the Bucs are in search of more.

They should be considered the favorites in Saturday’s district tournament, especially since they’ve already swept arguably the other top team in the bracket – O-K Black champion Mona Shores – in a doubleheader on May 15.

“It was a great, great pair of wins for us because it showed us that if we can beat them once, we can beat them again,” Buckingham said. “We know they have Desi Parker, who is a really good pitcher, but we hit her well.”

Regardless of their postseason fate, this group of Buccaneers have put the program on a path toward a brighter future.