SPRING LAKE – When Fruitport and Spring Lake meet up in any sport, you can expect each team’s best effort.

In boys soccer, the rivals have finished the season 1-2 in the Lakes 8 Conference each of the last three years, strengthening an already heated rivalry.

Spring Lake won the league title in 2012, Fruitport claimed the trophy in 2013, then Spring Lake took it back last fall. 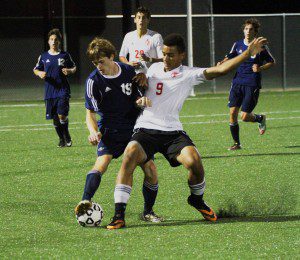 Spring Lake’s No. 9 Damontay Tyson looks for the take away against Fruitport’s No. 19 Noah Hendricks. Photo/Carol Cooper

That see-saw battle continued Tuesday when Fruitport visited Spring Lake and escaped with a 1-0 victory despite the Lakers dominating offensively, outshooting the Trojans 14-2.

Fruitport’s star senior forward Noah Hendricks scored his 20th goal of the season with 22-minutes to play in the first half and goalkeeper Connor Werschem was stellar in net, stopping all 14 Spring Lake shots.

Eli Flores got an assist on Hendricks’ goal.

“I definitely wanted to come out here and win because beating Spring Lake is a big thing,” said Hendricks, whose winning shot came from outside the box, struck the crossbar and shot down below Spring Lake goalkeeper Bruce Boes. “A game winning goal against Spring Lake trumps everything.

“I’m glad it takes us one step closer to getting that conference championship this year. I was happy when I hit that goal, it came off my foot good. You can’t ask for anything better.”

In the first half it didn’t seem like the contest would come down to a single goal.

Spring Lake outshot the Trojans 7-1 before halftime and had four corner kicks to Fruitport’s one. 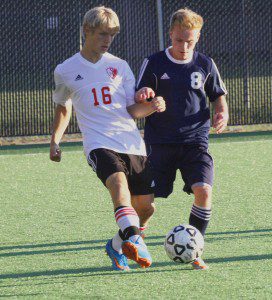 “This (shutout vs. Spring Lake) means the world to me right now. This is probably the most fun I’ve ever had playing soccer in like 14 years.”

Less than 10 minutes into the second half, Spring Lake was awarded a free kick just outside the box that a Fruitport defender was able to deflect out of bounds.

“To have 14 shots on goal and they have two, it’s one of those things, it’s just kind of the way this rivalry is going to go,” said Spring Lake coach Jeremy Thelen, whose team also lost to rival Grand Haven over the weekend.

“We worked hard today, I give us some credit there, but we’ve got some more work to do. We’re building as the season goes on, I think this will be a wake-up to lose two in a row, to two of our rivals.”

Spring Lake had to play the last seven minutes of the game with only 10 players on the field after one player drew a red card, which is an automatic ejection without substitution. It was unclear what the player did or said to draw the penalty.

“It’s always an amazing feeling to beat your rivals,” said Fruitport coach Greg Kobylak. “I am so happy for the guys and proud of their effort.

“But the season is not done. We still have areas in which to improve and games to win to accomplish all of our goals.”