NORTON SHORES – For a while it looked like Friday’s Mona Shores-Reeths-Puffer game might be a flashback to a few years ago, when the contest between the cross-town rivals was pretty competitive.

The Sailors, who came into the game heavily favored, only led 14-6 at halftime.

But Mona Shores came out of the locker room with a head of steam, scoring the next 28 points to defeat Reeths-Puffer 42-12 in an O-K Black Conference game at Sailor Stadium.

The Sailors are now 6-0 on the season and 2-0 in conference play, the best start in their 50-year history. The victory wrapped up a third straight playoff appearance for Mona Shores.

“Give credit to Reeths-Puffer for limiting us to just four offensive possessions in the first half,” said Mona Shores Coach Matt Koziak. “They were able to maintain drives to eat clock and keep the ball out of our hands.

“I told (the players) at halftime, this is not how we play and we have to execute in the second half.” 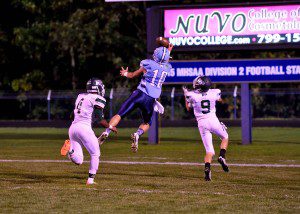 Reeths-Puffer failed to take advantage of a Sailor team that played without starting quarterback Tyler Trovinger and wideout Kobe Burse. Both were sidelined as they continued to mend nagging injuries.

“I was proud of our kids on how we prepared for this game,” said Reeths-Puffer Coach Kyle Jewett, whose team is now 3-3 on the season and 1-1 in league play. “We made too many mistakes in the second half.

“We currently have 10 seniors and we’re expecting to have a strong, nurtured varsity team next year.”

Mona Shores opened the scoring with 15-yard touchdown run by Archie Petty with 7:35 left in the first quarter.

The Rockets responded on their next drive, going 75 yards on nine plays that ended with a 20-yard touchdown pass from quarterback Blake Ross to Jordan Cooley, cutting the Sailor lead to 7-6 with 2:36 left in the first quarter. 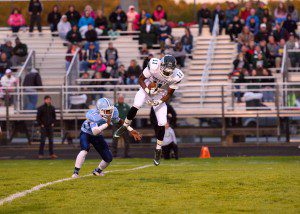 Darece Robinson gave the Sailors a 14-6 lead late in the first with a 32-yard touchdown reception from backup quarterback Elijah Wilson.

The second quarter was scoreless.

Broersma added two more touchdowns in the fourth quarter, a 15-yard catch with 11:26 left in the game and a six yard run with 7:56 remaining.

The Rockets’ Cooley scored his second touchdown with 4:27 left on a three-yard run. 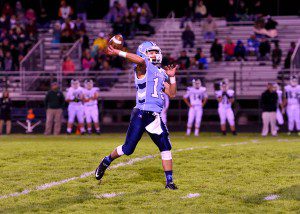 Sailors quarterback Wilson threw for 155 yards, three touchdowns and one interception, while Shermeta rushed for 137 yards and a touchdown.

The Rockets were led by Ross with 63 passing yards and Cooley who had 59 yards of total offense.