Spring Lake ties Fruitport with 26 seconds left, then goes on to win soccer showdown in overtime, 5-3

FRUITPORT – A high school soccer match is 80 minutes long, and teams that play hard the entire time have a chance to win.

The Spring Lake Lakers demonstrated that on Thursday in a big game against Fruitport, and as a result could end up with a share of a conference championship.

The Lakers were down late in the game but tied the score with 26 seconds remaining on a goal by Baruch Kamps, then eventually won in overtime 5-3. 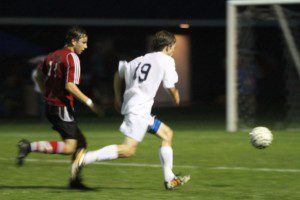 With the victory, Spring Lake tied Fruitport atop the Lakes 8 Conference standings with an 8-1 record. Both teams have one conference game remaining.

“We gave up two leads, that’s not a thing we want to do,” said Spring Lake Coach Jeremy Thelen. “Answering with three unanswered goals at the end to come back is a huge thing for these guys.

“We’ve had some difficulty scoring so that’s great for us.”

Spring Lake got on the board first, about 13 minutes into the first half, when Ryan Zietlow launched a long shot that was saved by Fruitport goalkeeper Connor Werschem. But Ben Mast was waiting on the left wing to strike the rebound in and put the Lakers up 1-0.

Fruitport tied the game with 4:54 left in the first half when Spring Lake was called for a foul inside the box which led to a penalty kick. Noah Hendricks made no mistake in blasting the shot past Spring Lake goalkeeper Bruce Boes.

Spring Lake pulled ahead about a minute into the second half when Chase Palmer got the ball near the right wing corner and floated a shot along the goal line that barely got in under the crossbar.

But the Trojans didn’t have the final word.

With just 26 seconds to play in regulation, Fruitport was whistled for a foul along the sideline, which led to a free kick for the Lakers. Keegan George lofted the kick into a crammed box, where Palmer directed it to Kamps, who scored to send the match into overtime.

“I was nervous,” Mast said. “I had some doubts but Baruch pulled through and gave us that tie. I think when we tied it, the wind kind of got taken out of their sails.”

High school overtime consists of two 10 minute periods that are played in their entirety, regardless of scoring.

In the first extra session, Mast scored his second of the night, and ultimately the game winner, with 1:51 to play on a long shot from the left wing.

Zietlow finished the scoring with a penalty kick goal with 16:30 remaining in the second overtime to ice the game.

“We’ve been pretty resilient all year whenever we’ve been tied at halftime or been down,” Fruitport Coach Greg Kobylak said. “It will be a real good test to see if we can be resilient on a bigger scale, not just within a game.”

Lulo Mafahla: The kid from South Africa who gave up football to boost WMC’s soccer team this fall