Rem Pitlick continues his goal-scoring tear, pushing the Lumberjacks past the Tri-City Storm 4-3

MUSKEGON – Muskegon Lumberjacks Coach Todd Krygier has been scolding his team about wasting too many scoring opportunities.

But Rem Pitlick has definitely not been part of that problem.

The Lumberjack forward, acquired over the summer from Waterloo, has been on a tear lately, scoring five goals in his last five games. 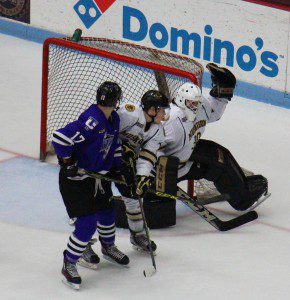 Two of those goals came on Saturday night, helping the Lumberjacks sneak past the Tri-City Storm 4-3 in front of 1,631 fans at L.C. Walker Arena.

The victory, which included a number of fights between numerous players late in the game, avenged a Friday night loss to the Storm. Muskegon improved to 9-8 on the season (including 7-2 in November) while Tri-City fell to 7-9-4.

Pitlick leads the team with 10 goals and nine assists and is third in the league in goal scoring. His efforts have been a blessing for the Jacks, who have been winning more lately but have scored two goals or less in four of their last six victories.

“My recent success has been the result of playing with great players,” said Pitlick, who also had an assist on Saturday. “I am just the beneficiary of their great plays.”

“He’s been playing fantastic,” Krygier said about Pitlick. “He’s been keeping us out of a total scoring drought. He had some nice goals tonight.”

Krygier was happier with his team’s overall offensive attack on Saturday, which also included goals from Trevor Hamilton and Will Graber and two assists from Collin Adams.

“I thought we did a good job hustling to the net, getting some screens and having more of a net-front presence in general, which helped us score some goals,” he said.

Sharing the spotlight with Pitlick and the offense was backup goalie Devin Cooley, who made the most of a rare start by stopping 30 of 33  shots to collect his first victory of the season. 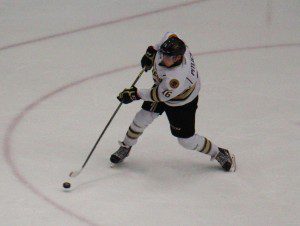 Cooley has only started two of the Jacks’ 17 games this season, the last one on Oct. 17.

“We’ve had a lot of games lately and (starting goalie) Joey Daccord has been carrying the load,” Krygier said. “Devin has been working real hard in practice and staying sharp. I congratulated him on getting his first USHL win.”

Hamilton opened the scoring with a power play goal at the 8:45 mark of the first period, driving a slap shot from the point through traffic and past Tri-City goalie Matt Greenfield.

Matej Paulovic and Pitlick assisted on the goal.

The Jacks went up 2-0 at 16:17 of the first when Pitlick took a shot from close range, had it blocked, the popped his own rebound past Greenfield. Derek Daschke and Collin Adams had the assists.

Tri-City came out flying in the second period, taking five of the first six shots on goal.

The Storm’s Joseph Cipollone got his team on the board when he scored on a rebound at 3:14 of the second period.

But Muskegon answered with a goal about six minutes later to go up 3-1 after two periods. 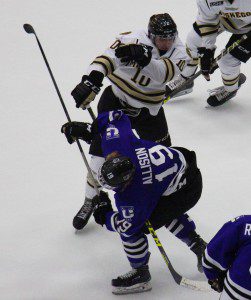 Adams entered the Tri-City zone on the left side with the puck, then fed a perfect pass in front of the goal to Pitlick, who buried it with a wrist shot from the right circle.

Graber capped the Jacks’ attack with a goal at 7:33 of the third period, with assists from Logan Drevitch and Laine McKay.

Play got rough in the last few minutes of the game, resulting in a number of minor skirmishes and penalties.

The Storm took advantage with a pair of power play goals in the last two minutes from Wade Allison and Carson Meyer, but the Jacks held on for the victory.

Leprechauns from another league hand Clippers first loss of the season