The Sailors made 13 of 16 free throws, including 9 of 10 in the fourth quarter. The Lakers struggled, hitting only 14 of 29 in the game, including 8 of 17 in the final eight minutes.

That difference allowed the Sailors to escape with their first win of the season, 52-49 in their own gym.

“On Friday, we were 11 for 29 (from the line) and lost by four (against Grand Haven),” said Mona Shores Coach Gene Gifford, whose team improved to 1-2. “Their focus yesterday in practice was much better on free throws. 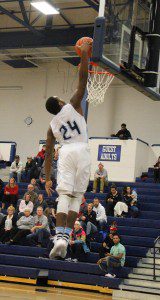 “After the game against Grand Haven they understood we need to a better job on free throws. A couple of them, I changed a couple of their shots and they did it today.”

Neither team came out of the gate especially well. The first quarter ended with the Sailors leading just 7-6, and the teams combined for 12 turnovers.

The Sailors outscored Spring Lake by eight points in the second quarter, hitting three triples and three of four free throws. They went to the locker room with a 28-19 edge.

Mona Shores hit another 3-pointer early in the third quarter to take a 12-point lead, then the Lakers woke up. Spring Lake went on a 16-4 run to tie the game at 35-35, until Mona Shores senior Archie Petty nailed a three-pointer as time expired, giving the Sailors a 38-35 lead at the buzzer.

From that point on, the teams battled back-and-forth, the largest lead being four points.

“We missed so many easy ones in the first half,” Spring Lake coach Bill Core said. “We just said, we’ve got to stay confident, we’re getting good shots, we’ll knock them down in the second half.

“That’s how close these games can be, that’s why you’ve got to play for 32 minutes.”

Mona Shores star senior Kobe Burse fouled out with five minutes left in the game, leaving the Sailors without one of their leaders. 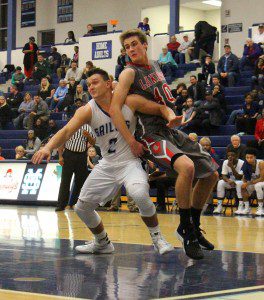 With just 2:09 to play, Spring Lake junior Craig Whittaker drilled a three to pull the visitors within a point, 48-47.

Laker senior Keegan George went to the foul line with 28 seconds left and a chance to give Spring Lake the lead.

Unfortunately George, a 90 percent free throw shooter, had an off-night at the line and missed both attempts.

That left the door open for Mona Shores. Senior Darece Roberson drained both of this free throws with 18 seconds remaining to give the Sailors a 50-47 lead.

Mona Shores helped itself by hitting 8 of 20 shots from 3-point range.

“We had a tough week last week and we lost a tough game on Friday so it’s good to get something started,” said Gifford.

“The free throw discrepancy at the end of the game, us with a low percentage and them with a high percentage, was a key,” Core said.

Deandre Oakes-Owens led the Sailors with 12 points, Archie Petty and Darece Roberson both put in eight points and Tyler Trovinger had seven points and four rebounds.

Burse finished with 15 rebounds, six points, four steals and a pair of blocks for Mona Shores.