EGLESTON TOWNSHIP – Two-time defending West Michigan Conference champion Shelby is going to have its hands full if it wants to three-peat this season.

That’s because there are some other very good basketball teams in the league, including Whitehall and Oakridge, who hooked up in a barnburner on Friday night.

The game was back-and-forth throughout but Whitehall was able to pull out a thrilling 61-58 victory.

But Whitehall’s Lucas Schumm nailed a 3-pointer to put his team on top, then Keenan Aylor added two free throws to secure the victory. 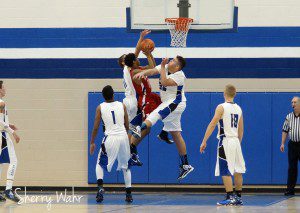 Whitehall’s Cortez Watson goes in for the drive against Oakridge’s No. 35 Garrison Curry. Photo/Sherry Wahr

“That was a great high school basketball game,” said Whitehall Coach Nate Aardema. “It was back and forth, huge runs in the first half where they got up big. They were executing perfectly. (Oakridge coach) Tracy (Ruel) had them really well prepared.

“We got a time-out then we executed really well for a while and did some nice things. Then it was a slug-fest from there on. It seemed like a punch-counter punch kind of thing the rest of the way.”

After being tied at five points, Oakridge went on a 16-5 run until the last minute of the first quarter to take a 21-10 lead.

But Whitehall’s Daniel DuBois hit a pair of 3-pointers in the final minute, cutting the Eagle lead to 21-16 after one quarter.

“Daniel stepped up, I think those were probably the first two shots he took all night,” Whitehall coach Nate Aardema said. “Daniel is incredible. He won’t allow himself to get beat. He’s good at everything he does.” 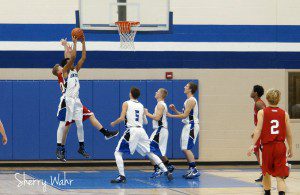 The DuBois three-pointers sparked a 12-0 run that gave the Vikings a 22-21 lead.

Oakridge had opportunities to pull away in the first half but hit just 3 of 10 free throws in the first two quarters.

“That killed us,” said Oakridge Coach Tracy Ruel. “If we make six of those and we limit them from making them, it’s still a ten-point game in our favor.”

Whitehall converted on 10 of their 13 free throws in the first half and took a 31-30 lead into the locker room.

The third quarter was the James Cooper III show. Of the 10 points Oakridge scored in the frame, Cooper was responsible for the first eight.

Whitehall’s Schumm was just as determined, scoring six points in the quarter to preserve the Vikings’ one-point lead, 41-40 at the third break.

Neither squad could pull away in the fourth quarter, mostly because they combined for 15 turnovers in the last eight minutes. 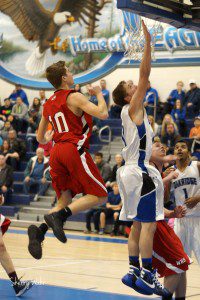 11 Nate Wahr gets by Whitehall’s Franklin Uganski for the layup. Photo/Sherry Wahr

Oakridge got down by as many as six points late, but were able to tie the score at 56 with just 1:29 to play.

That’s when Schumm hit his triple and Aylor made his free throws to ice the win for Whitehall.

Aylor finished with 20 points while the Eagles’ Cooper led all scorers with 22 points.

Brady Luttrull scored 14 and Nate Wahr drained 13 points for the Eagles in the losing effort.

“I’m excited,” Ruel said, despite the close loss. “I really enjoy this team. I think we’re going to do some good things. The outcome wasn’t in our favor tonight but the heart and the hustle that my guys gave tonight I can’t fault.”