Pitlick scores the winner in OT, giving the Lumberjacks a 3-2 win over Omaha 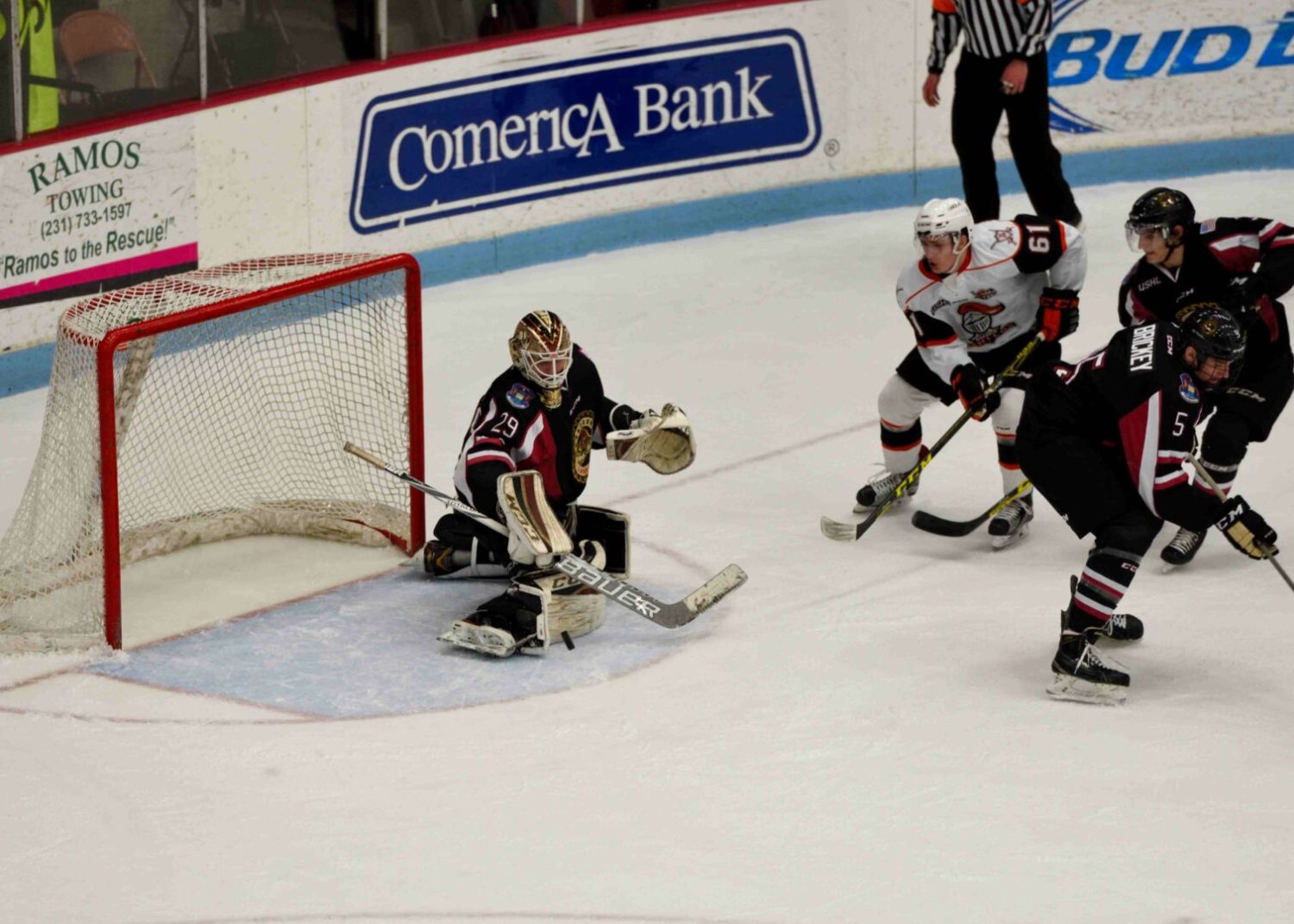 MUSKEGON – Rem Pitlick’s scoring streak is still alive – and so are the Muskegon Lumberjacks.

Pitlick, the United States Hockey League’s leading scorer, scored a goal with 1:28 left in regulation on Saturday to force an overtime period against the Omaha Lancers. 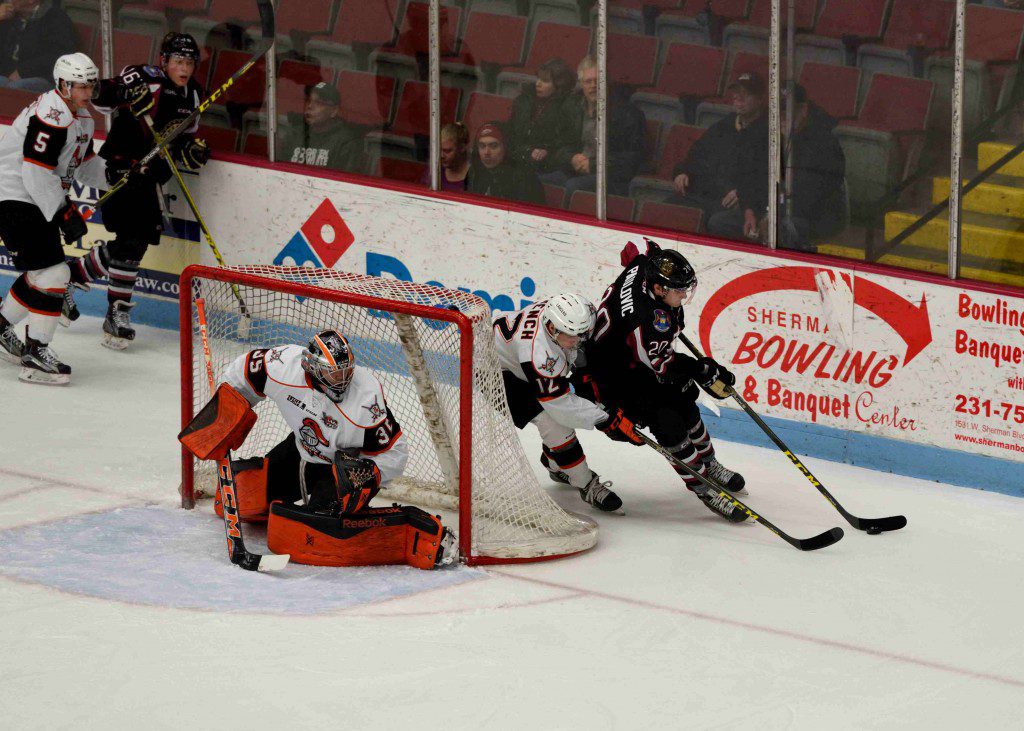 Then he came through again in the extra session, lifting the puck into the Omaha goal from close range with 47 seconds left, giving the Lumberjacks a thrilling 3-2 victory over the Lancers in front of 1,985 fans at L.C. Walker Arena.

The Lumberjacks, who have been struggling in recent weeks, have suddenly won three out of their last four games. They are now 19-20-5 on the season, good for 43 points and a tie for seventh place in the USHL’s Western Conference.

Muskegon is 13 points out of the last playoff spot (fourth place) with 16 games (32 possible points) left in the regular season.

“It was another comeback game for us, which was huge,” said Muskegon Coach Todd Krygier. “The guys showed a lot of character and came back and won against a very good team from the west.

“I’ve been real fortunate because the guys have always worked real hard for me. It’s just about whether we have the talent level and the skill level. It’s not an easy process, but tonight the guys hung in there and it was an exciting game.”

The Lumberjacks were listless for the first two periods and trailed 2-0 at the second intermission.

Omaha got a pair of first-period goals from William Fallstrom and Josh French. 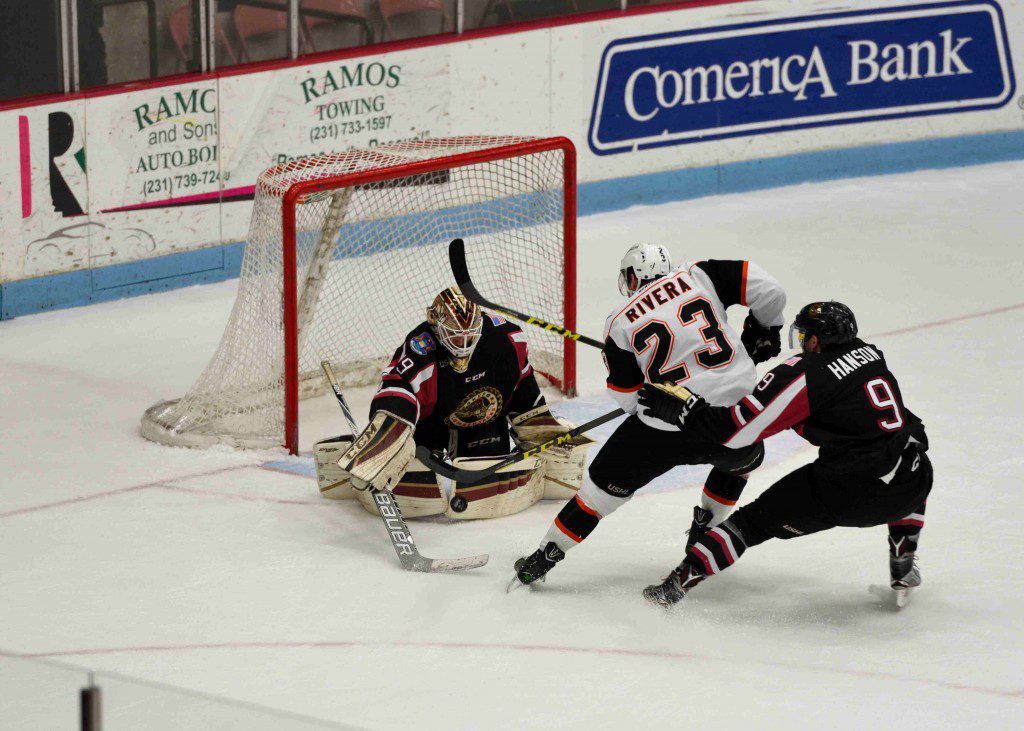 Goalie Joey Daccord kept the Lumberjacks in the game, stopping 19 of 21 shots in the first and second periods while the offense was struggling. He ended up stopping 30 of 32 shots in regulation.

“I thought Joey was pretty awful in the first period,” Krygier said. “But he battled back and made some great saves when nothing was happening and gave us a chance to come back.”

The comeback began just under eight minutes into the third period when Muskegon’s Giovanni Carabelli scored, with assists from Grant Gabriele and Nate Kallen.

Pitlick scored the tying goal with 1:28 left, breaking in to the left of Ohama goalie Kris Oldham and hitting paydirt, with assists from Matej Paulovic and Graham Lillibridge.

The seven-minute overtime period was almost over when Muskegon’s Collin Adams stole the puck from an Omaha player deep in the Lancer zone, then got the puck to Pitlick, who hesitated a moment for Oldham to make a move, then popped in the winning goal. 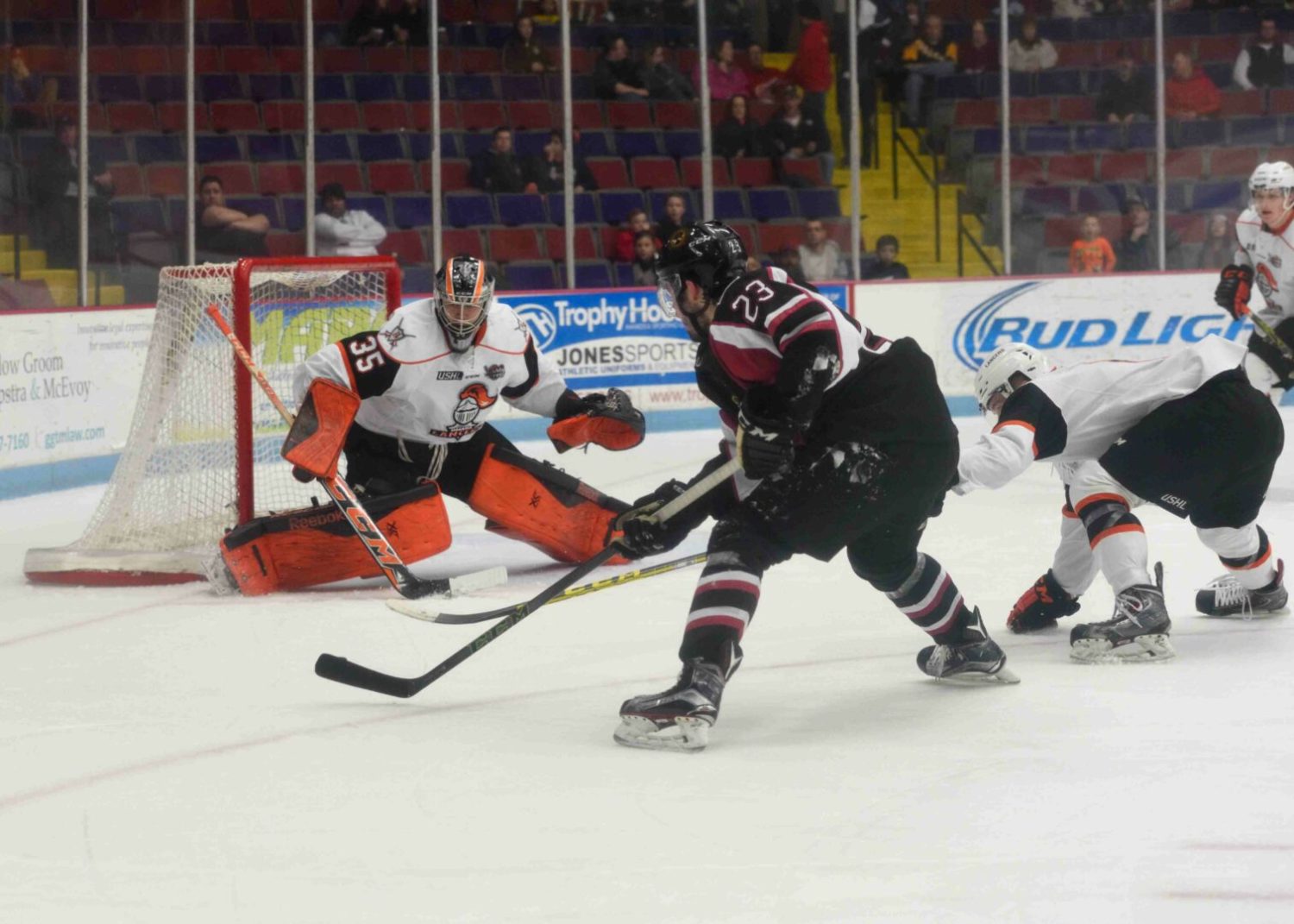 Charlie Gerard (23) sets up for the backhand shot on the Omaha net minder. Photo/Eric Sturr