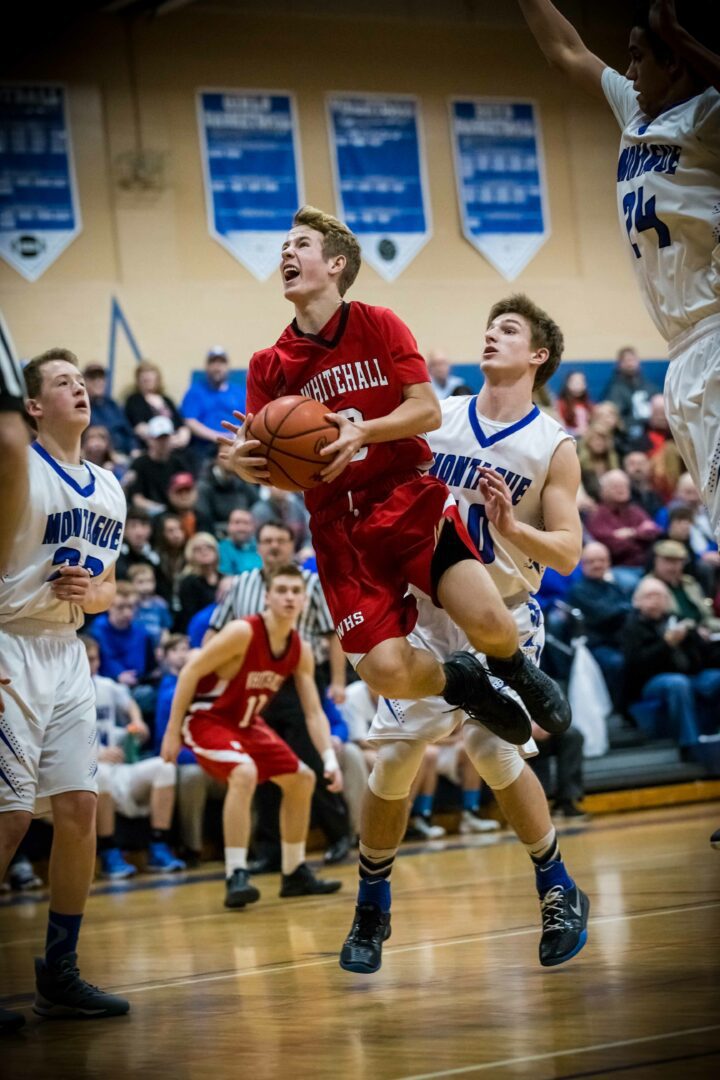 MONTAGUE – The Whitehall Vikings needed a win to remain in a tie for the West Michigan Conference lead on Friday, and they had to get in the most hostile of environments – archrival Montague’s gym.

But the Vikings rose to the task, breaking open a close game by hitting 17 of 20 free throws down the stretch to grab a 76-65 victory in front of a standing room only crowd. 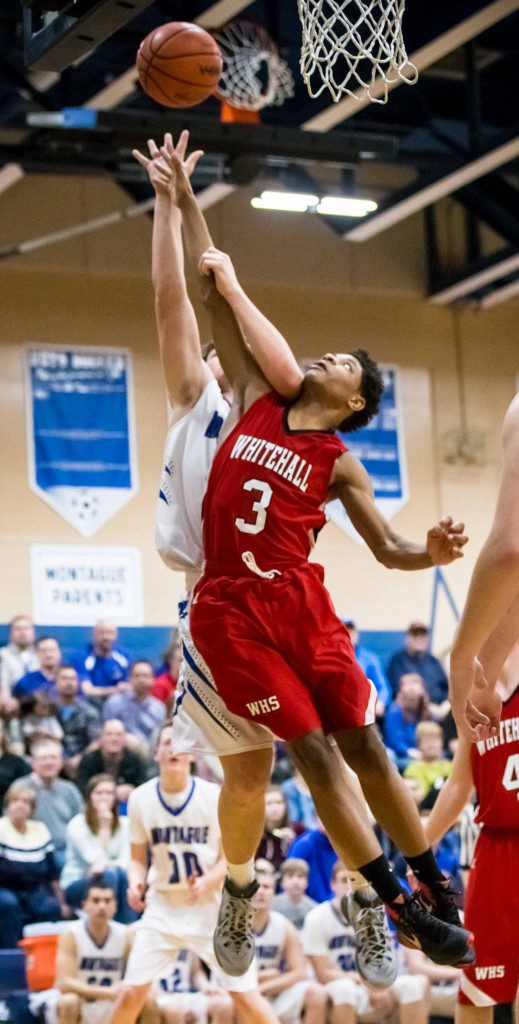 The win left Whitehall tied for first place with Shelby, which also won Friday. The Vikings (14-3 overall, 11-2 in the conference) can clinch at least a tie for the title with a win next week against Hart.

Whitehall Coach Nate Aardema, whose team won its first nine league games before losing two recently, said his team did a good job of dealing with the task at hand in Montague.

“Obviously, it’s human nature to look ahead and say if we win this then we’ve got Hart left and play that whole game in your head,” Aardema said. “These guys have been hearing me say for years now that we’ve got to win the next possession and for the most part they do a pretty good job at that.”

After a back-and-forth first quarter that ended with a 14-13 lead for the Wildcats, each team found its scoring touch.

Both teams started the second half on fire, combining to score on seven straight possessions without missing a shot.

The Vikings entered the fourth quarter with a slim 53-50 lead.

Neither team got off to a quick start down the stretch. The first 2 ½ minutes produced a total of four points and six combined turnovers.

“When you’re in a tight game, especially against your rival, that’s a momentum swing,” said Osborne, whose team is now 7-9 overall and 3-9 in the conference.

“It’s little things like that, if you don’t put yourself in that position. If we don’t have those four empty possessions, maybe as the game goes on we have a little bit of a lead.

“Whitehall’s a good team, Coach Aardema does a good job and they’re going to be a tough out in the tournament.” 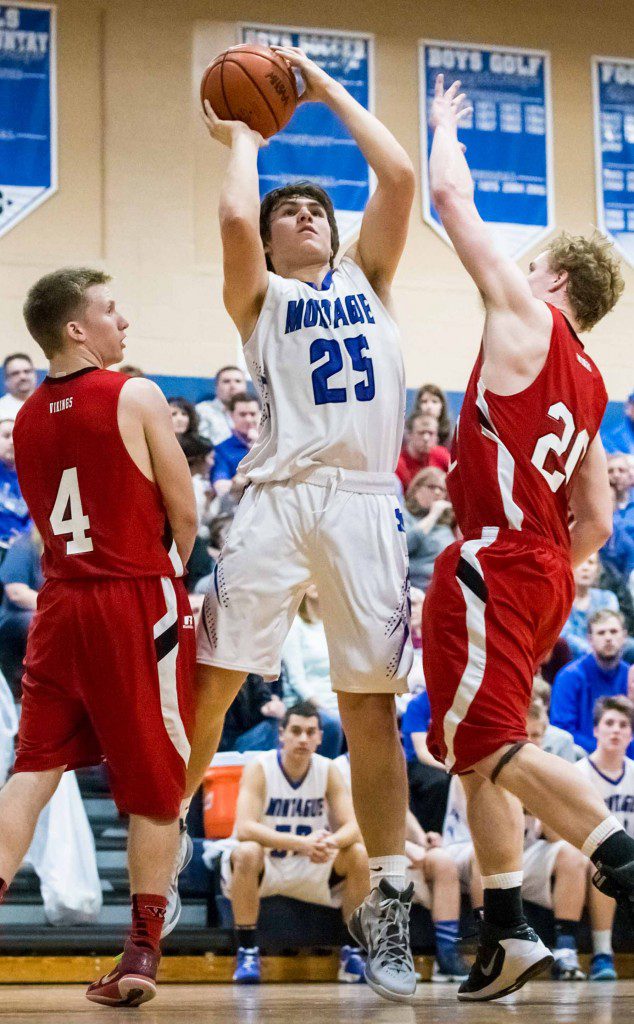 Josh Weesies goes up for the shot against Whitehalls No. 20 Keenan Aylor and No. 4 Daniel DuBois. Photo/Tim Reilly

Whitehall put the game away at the free throw line. Keenan Aylor hit all six of his free throw shots in the fourth quarter while Daniel DuBois made five of his six.

“I told them at the half, it’s hard to go to the rim every time,” Aardema said. “It’s hard to outlet and run as hard as you can every time. Winning is hard too, but they were willing to do what it took to earn the win tonight.”

C.J. Watson finished with a game-high 22 points for Whitehall. Schumm totaled 19, DuBois compiled 18 and Aylor netted 10 in the victory.

Josh Weesies paced Montague with 17 points, Merritt Hamann finished with 13 while Abram Erickson and Dylan Stever each scored 12 for the Wildcats. 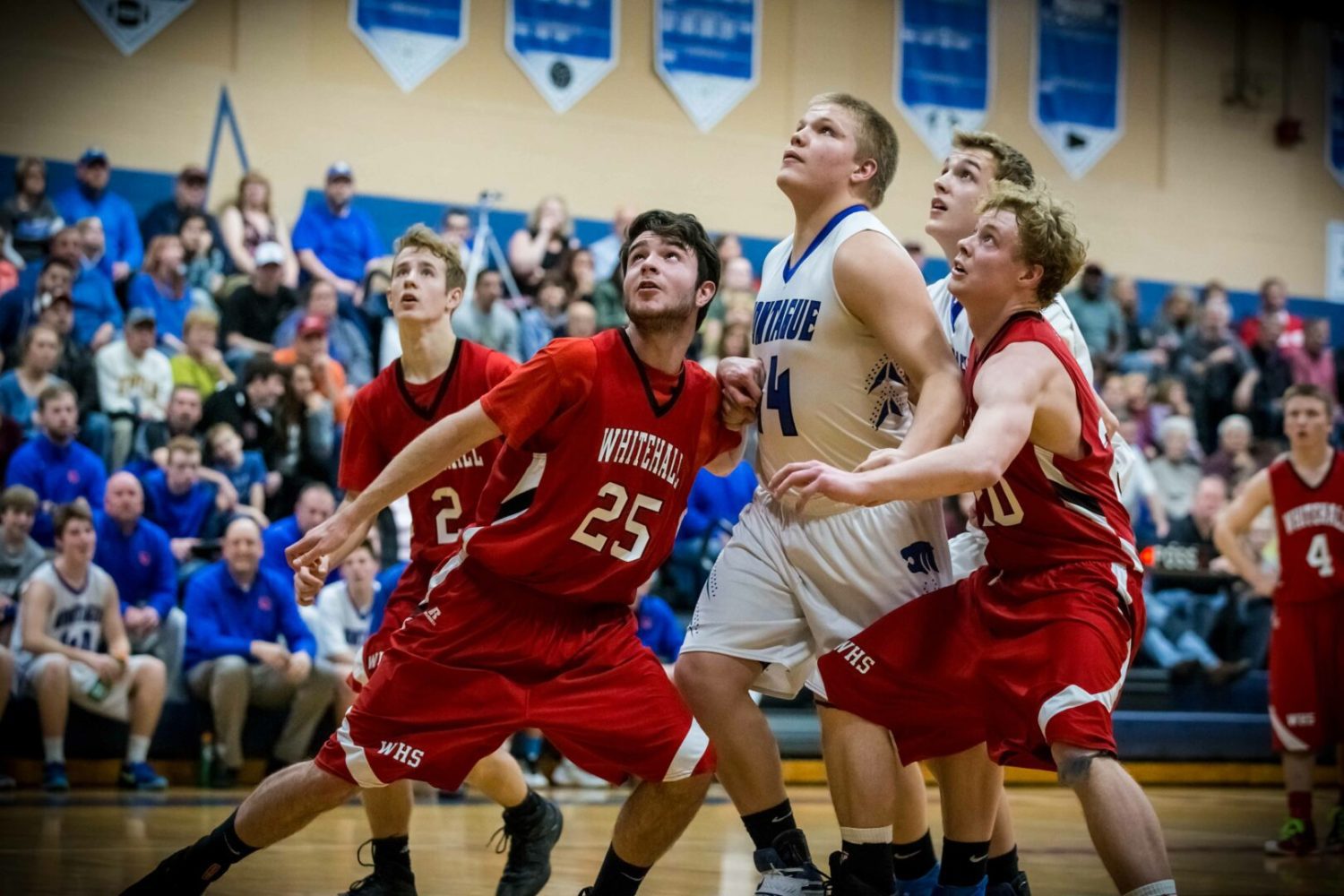 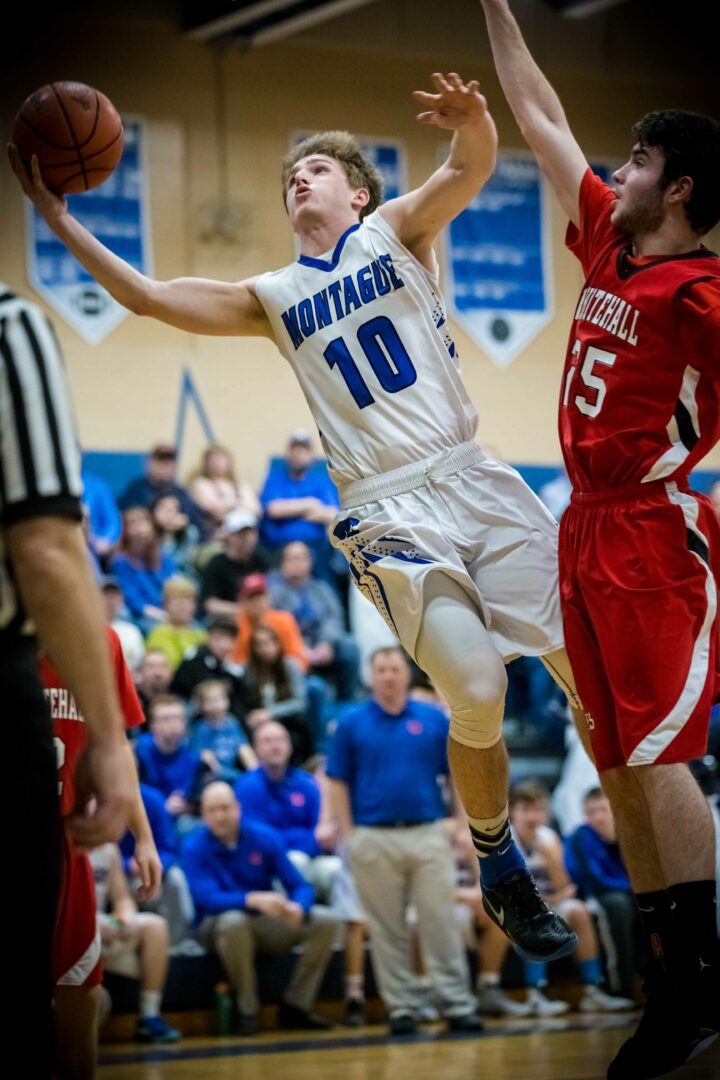 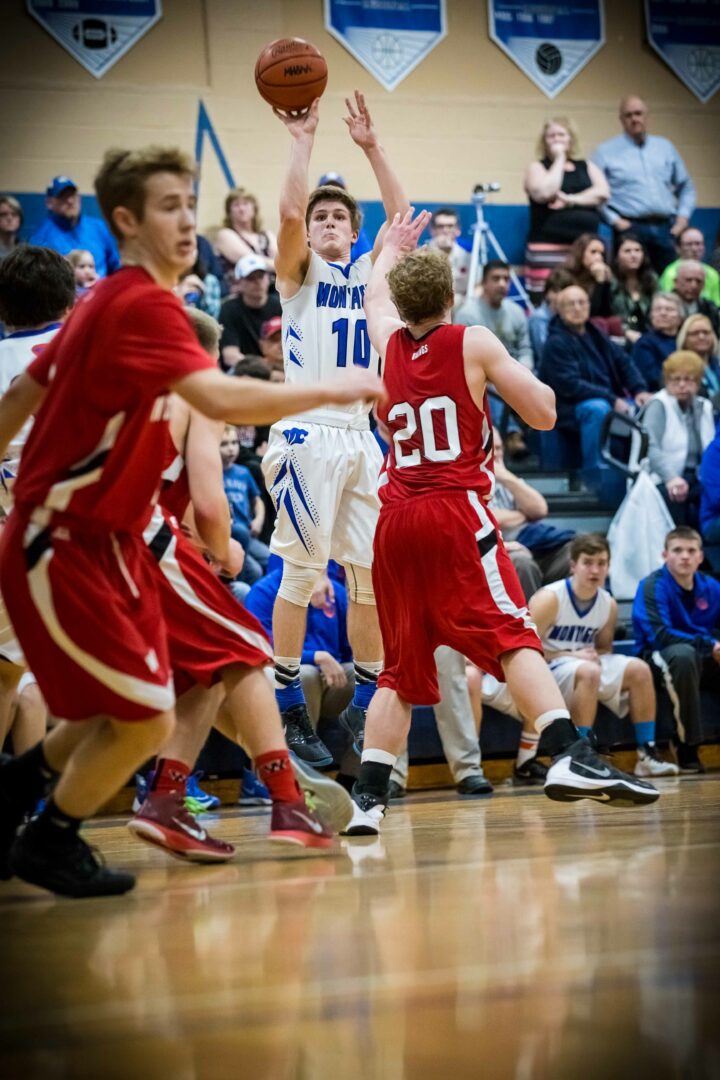 Jacob Buchberger gets up for the shot against Viking forward Keenan Aylor. Photo/Tim Reilly 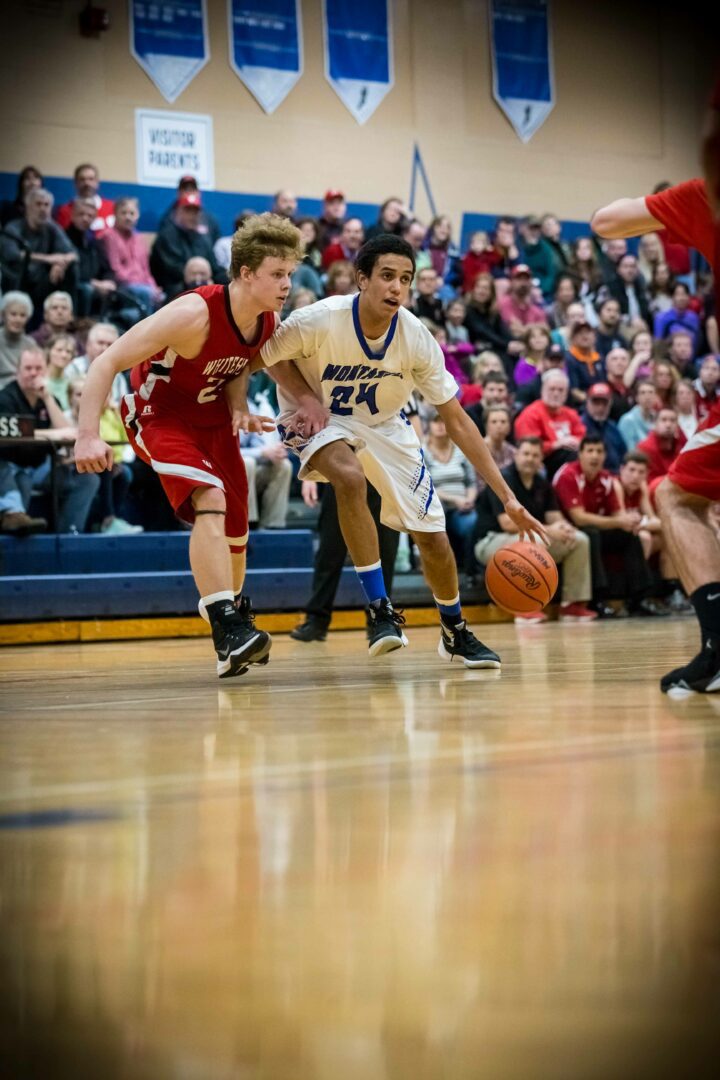 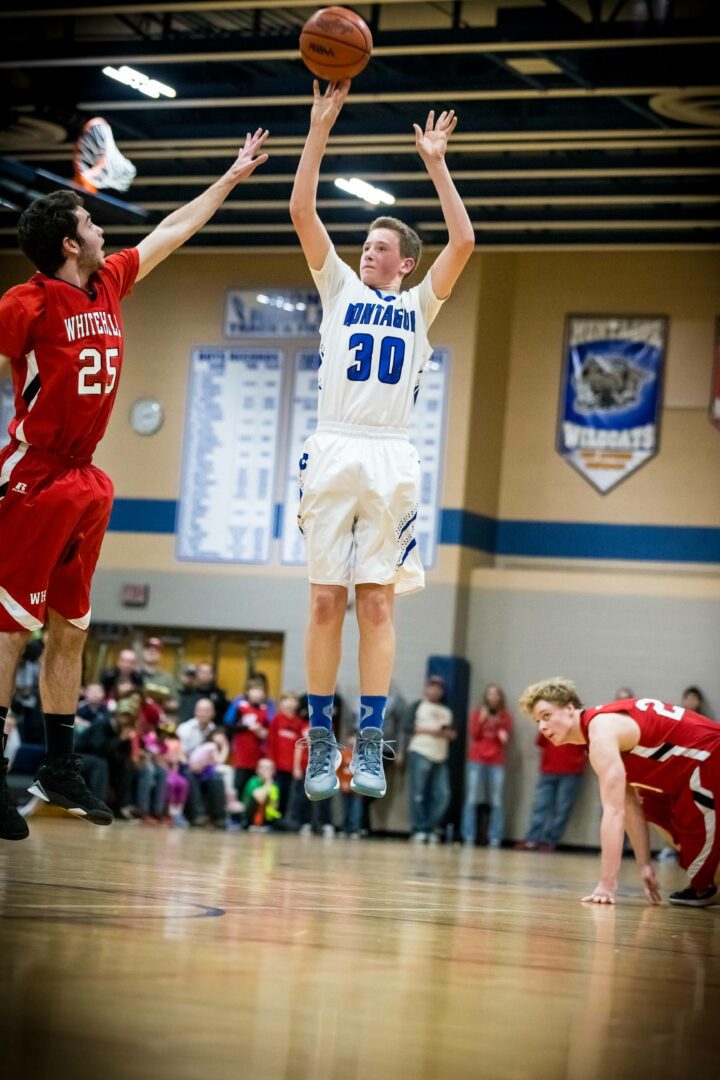 Abram Erickson goes up for the jumpshot as Whitehalls No. 25 Andrew Young. Photo/Tim REilly