SPRING LAKE – The Division 2 district softball finals turned out to be closer than expected for Spring Lake.

The Lakers, who were favored to win the tournament, jumped out to a five-run advantage, but allowed Allendale back into the game before clinching the district title with a 5-3 victory. 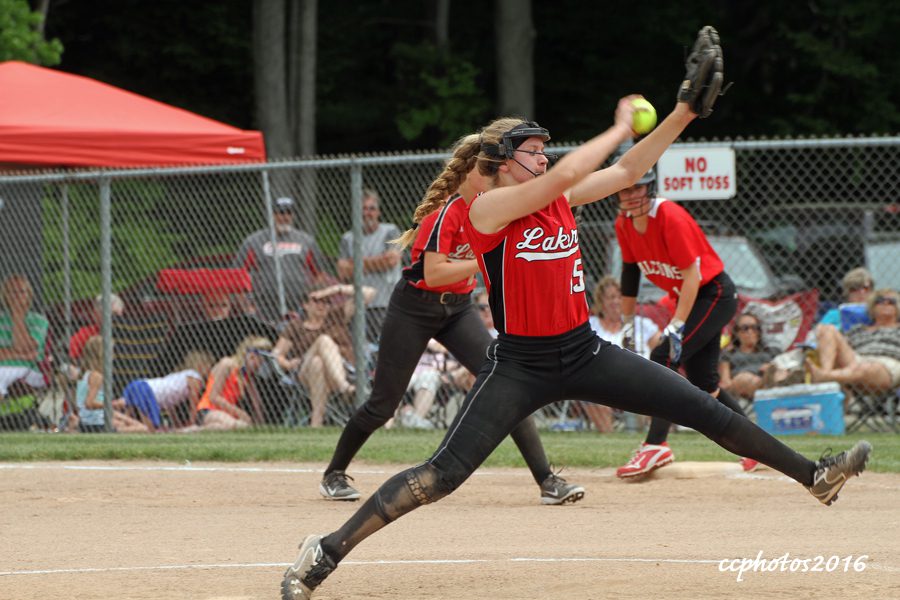 “They (Allendale) played very well,” said Spring Lake Coach Bill Core, who’s in his 27th season as varsity coach. “It’s not easy being down five runs on the road late in the game, but they kept their energy up and battled back and made it interesting. We feel very fortunate to get the win.”

The Lakers, wo defeated Fruitport 11-3 in the semifinals earlier in the day, improved to 31-5 on the season.

They will face Zeeland West, Hudsonville Unity Christian or Grand Rapids South Christian in the regional semifinals at Hope College next Saturday. A victory would put Spring Lake in the regional finals later that day.

Spring Lake will be looking for its first regional championship in school history. Last year the Lakers lost in the regional semifinals to Wayland, the eventual Division 2 state champion.

Spring Lake’s Jenna Core was the difference against Allendale, hitting a two-run single in the fifth inning to give the Lakers a 5-0 lead before the Falcon comeback attempt. 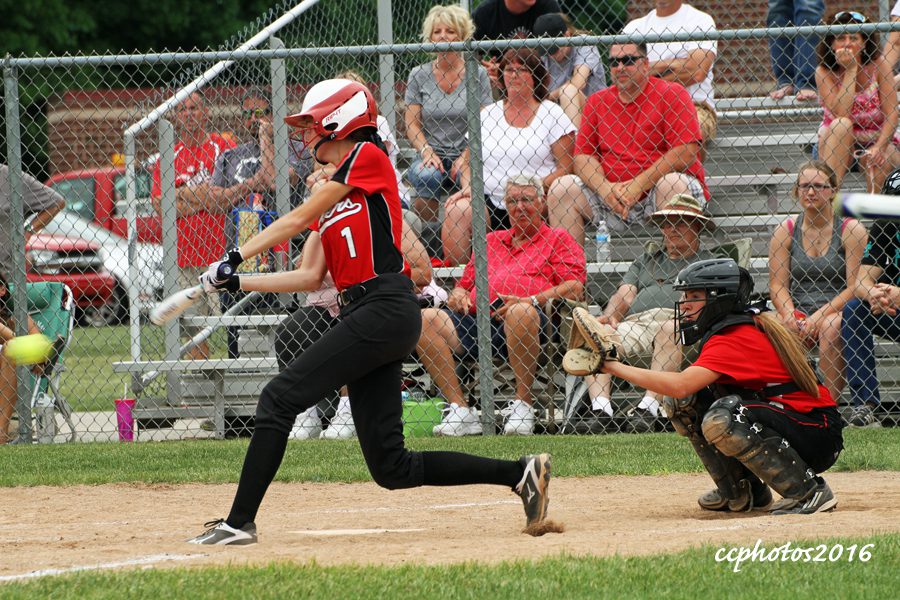 Jenna Core gets the hit for Spring Lake. Photo/Carol Cooper

Jenna Core, who hit nine home runs as a freshman this season, paced the Lakers with two singles and two RBIs.

“It feels great,” said Jenna Core about winning a district title. “This means a lot because my dad is the coach and hopefully we can keep moving on in the tournament.

“I just wanted to help my team win and I am glad that it happened.”

Leah Vaughan added two hits and scored a run for Spring Lake while Ann Marie Galloway and Lauren Somers each chipped in with a hit and an RBI.

Spring Lake opened the scoring with a run in the fourth inning to take a 1-0 lead.

The Lakers added four runs in the fifth inning to grab a 5-0 advantage.

The Falcons responded with two runs in the sixth inning to cut the deficit to 5-2 and left the bases loaded.

Allendale added a run in the seventh inning and had the tying run at the plate with two outs before ending the game on a foul pop out to the Laker third baseman. 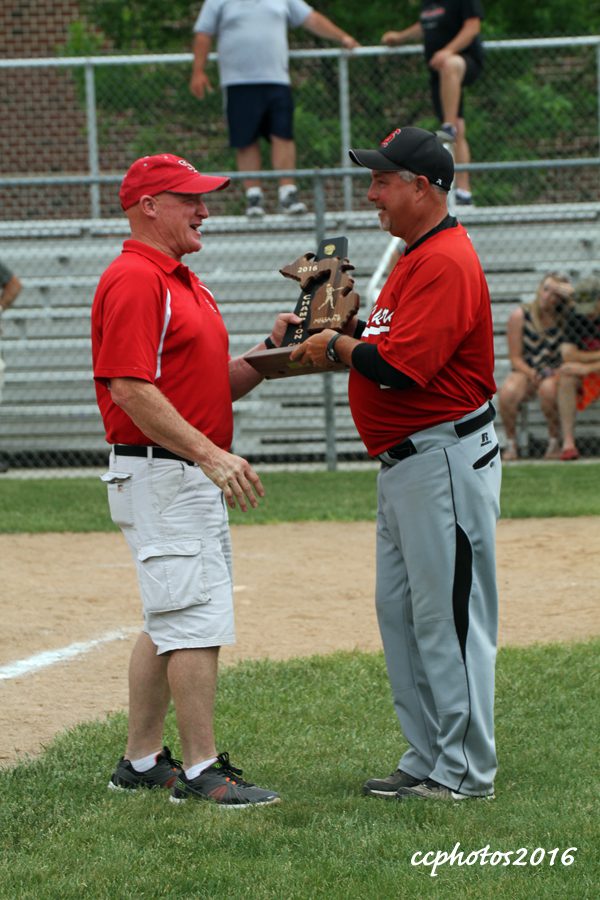 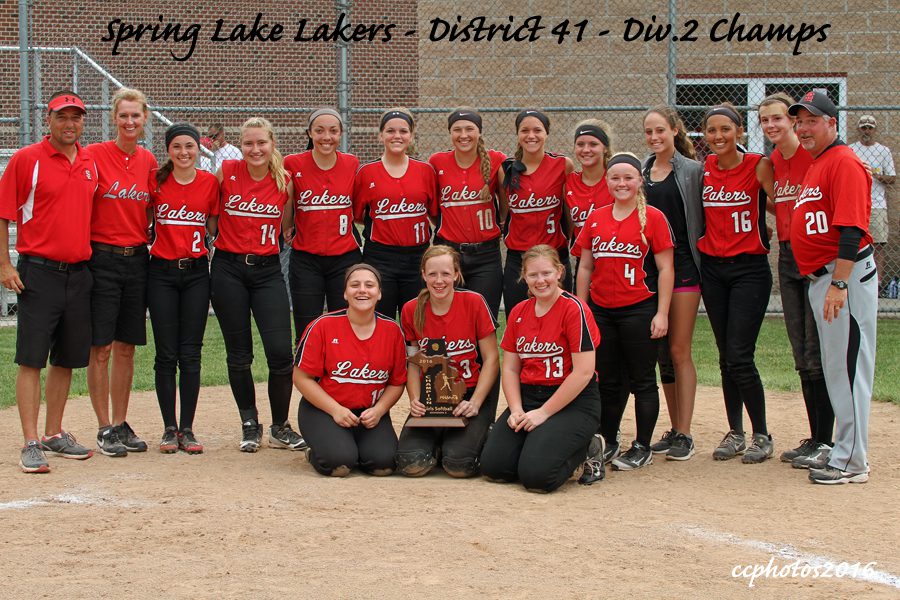 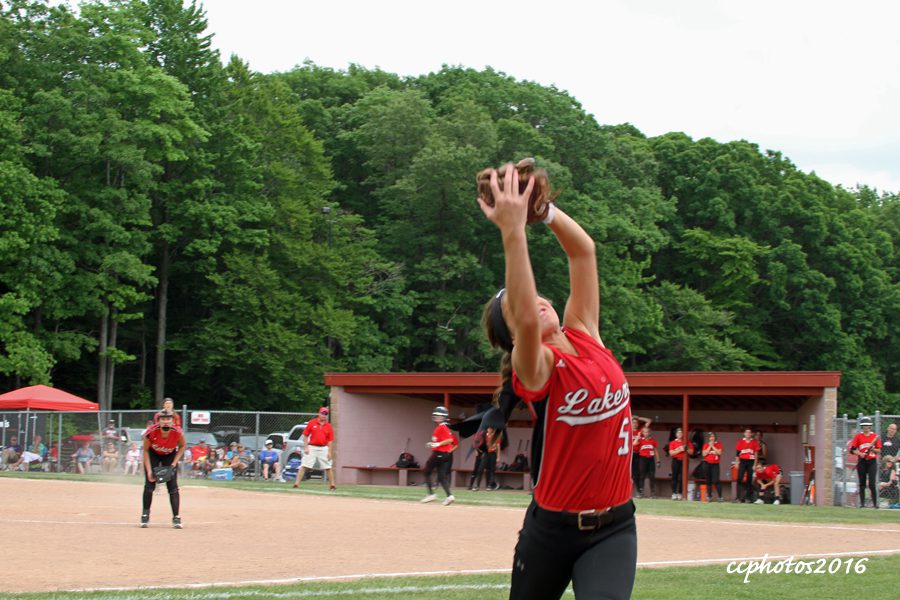