MUSKEGON – The Muskegon Clippers clinched a regional championship Saturday night with an explanation point – three of them, to be exact.

After falling behind early against the Illinois D20 Mules, they used a trio of home runs, from Connor Glick, Ryan Mergener and Andrew Null, respectively, to post an impressive 11-2 victory and clinch the championship of the National Amateur Baseball Federation regional tournament at Marsh Field. 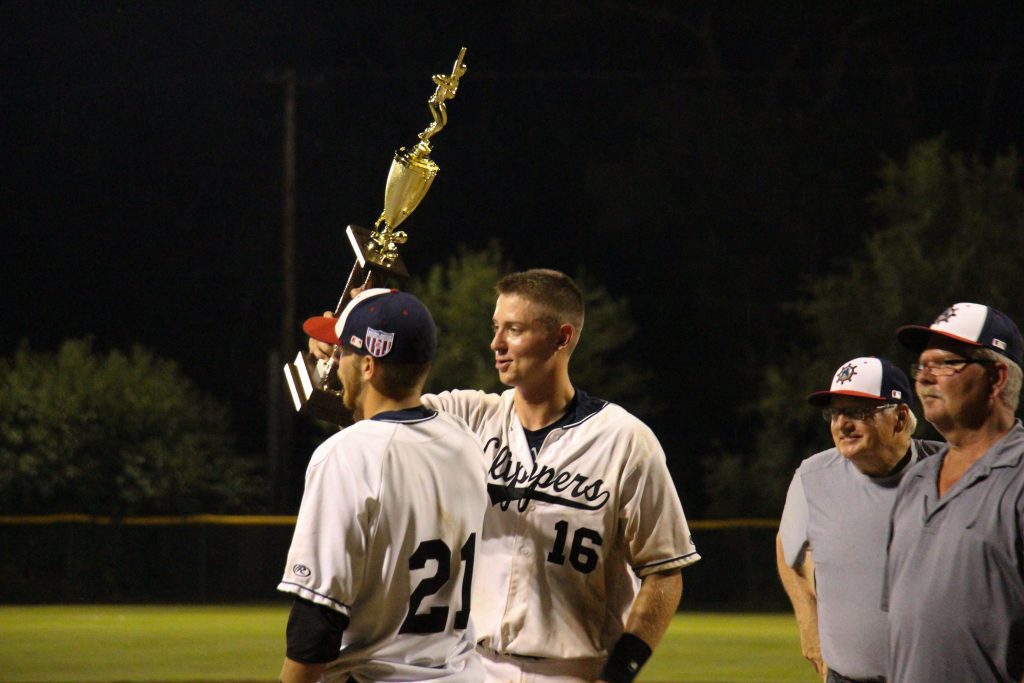 The Clippers finished with a perfect 3-0 record in the double-elimination tournament. They beat the Mules twice, with a win over the Holland Millers tucked in between. They are now 25-2 on the season.

“The three home runs were huge,” said Clippers Manager Walt Gawkowski, whose team pushed across six runs on the three homers. “Again we pitched well. We always look at the pitching first, and when they hold them to two runs, we know we’re going to score some, even if we start out slow.

“I never have had more fun during the summer than I have with these guys.”

Null, who knocked in three runs with his sixth-inning homer, said the Clippers think they can maintain their winning ways in the World Series in Toledo.

“I think we’re confident,” Null said, moments after his team accepted the tournament championship trophy and posed for photos. “The team has been pretty solid. If we pitch the way we have all summer we can be pretty good.” 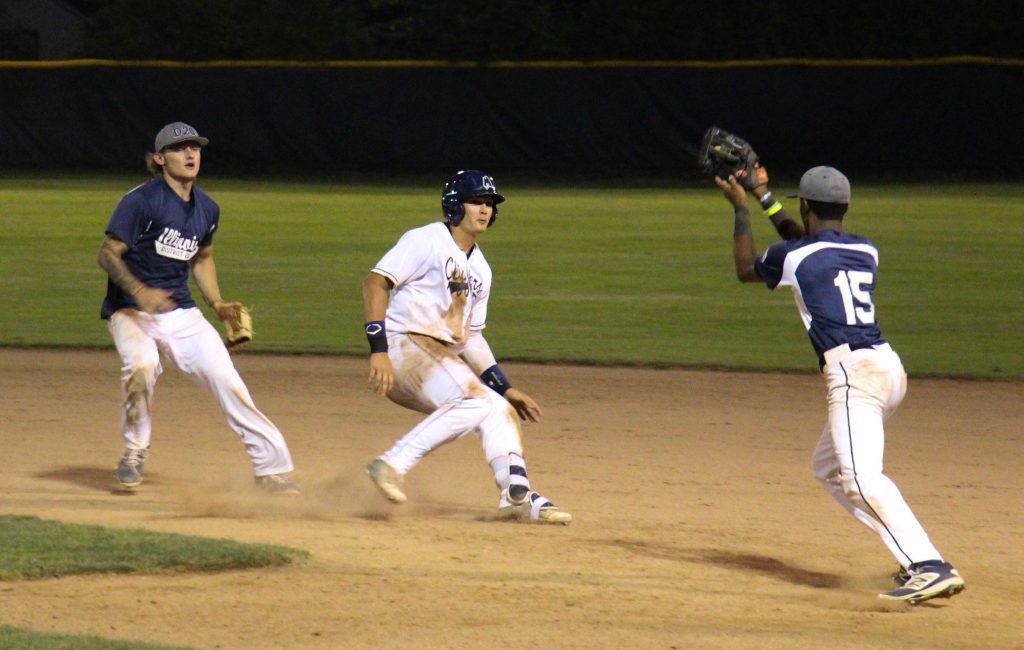 The Clippers had to rally to secure the victory and the title.

Muskegon opened the scoring in the second inning on a sacrifice fly by Nick Holt.

The Mules responded with two runs to take a 2-1 lead in the third, scoring a run on an error by the Clippers error and an RBI single by Ross Weber.

Muskegon tied the game 2-2 on a solo home run from Glick in the bottom of the third, then took the 3-2 lead in the same frame on an RBI single by Jacob Buchberger.

The Clippers extended their lead to 5-2 in the fourth on a two-run homer by Mergener, then added a run in the fifth with a one-run single from Holt.

Muskegon put the game out of reach in the sixth with the three-run home run by Null, who was making his first plate appearance of the tournament.

“They wanted me to pitch for most of the tournament, so they didn’t have me hit,” Null said. “I got a 2-0 fastball and he threw it right down the middle.”

The Clippers closed out the scoring in the eighth inning with a two-run single by Tyler Trovinger.

Glick paced the Clippers, and was named tournament Most Valuable Player, with three hits and an RBI. Holt knocked in two runs while Matt Williams, Trovinger and Buchberger chipped in two hits apiece. 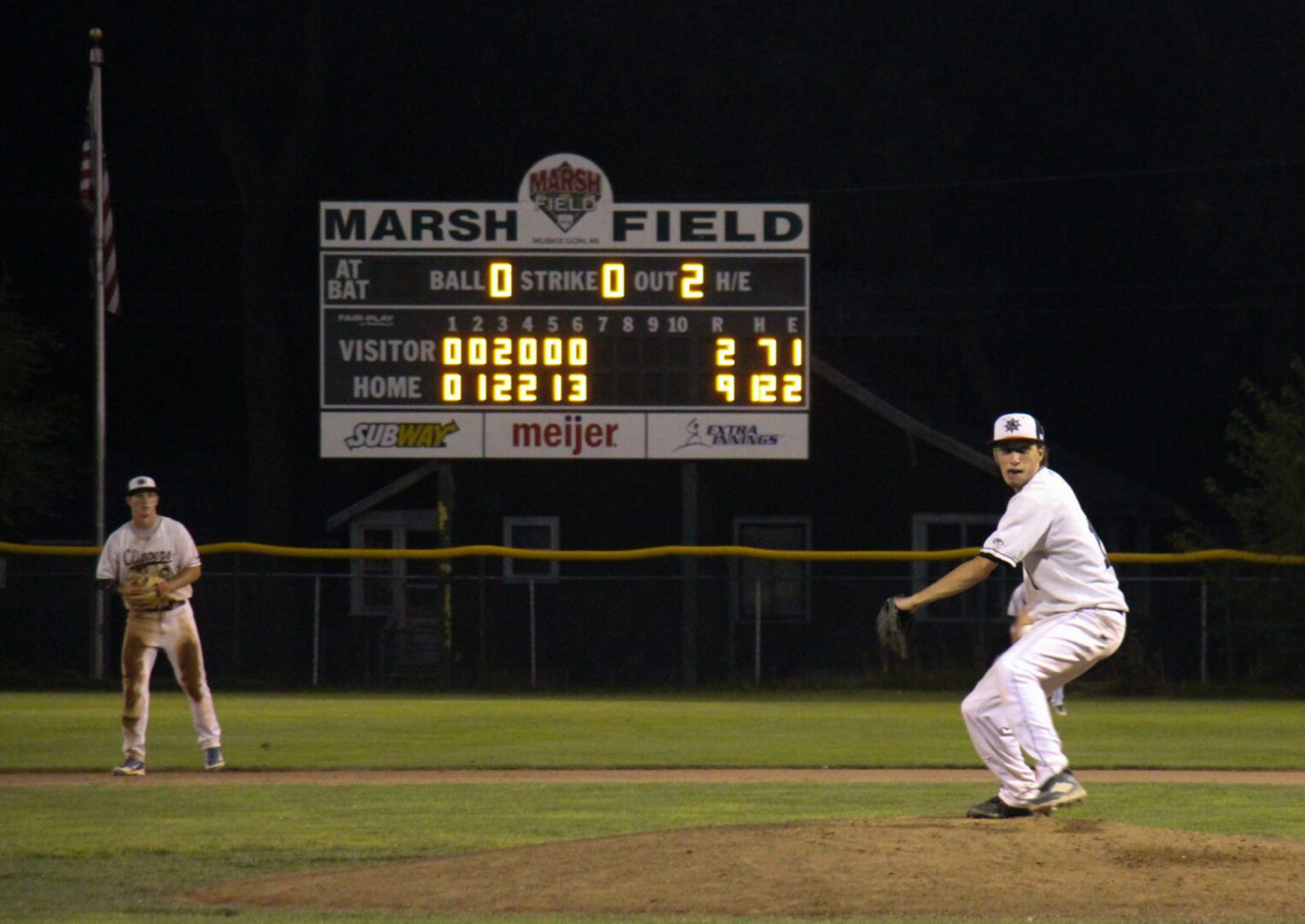 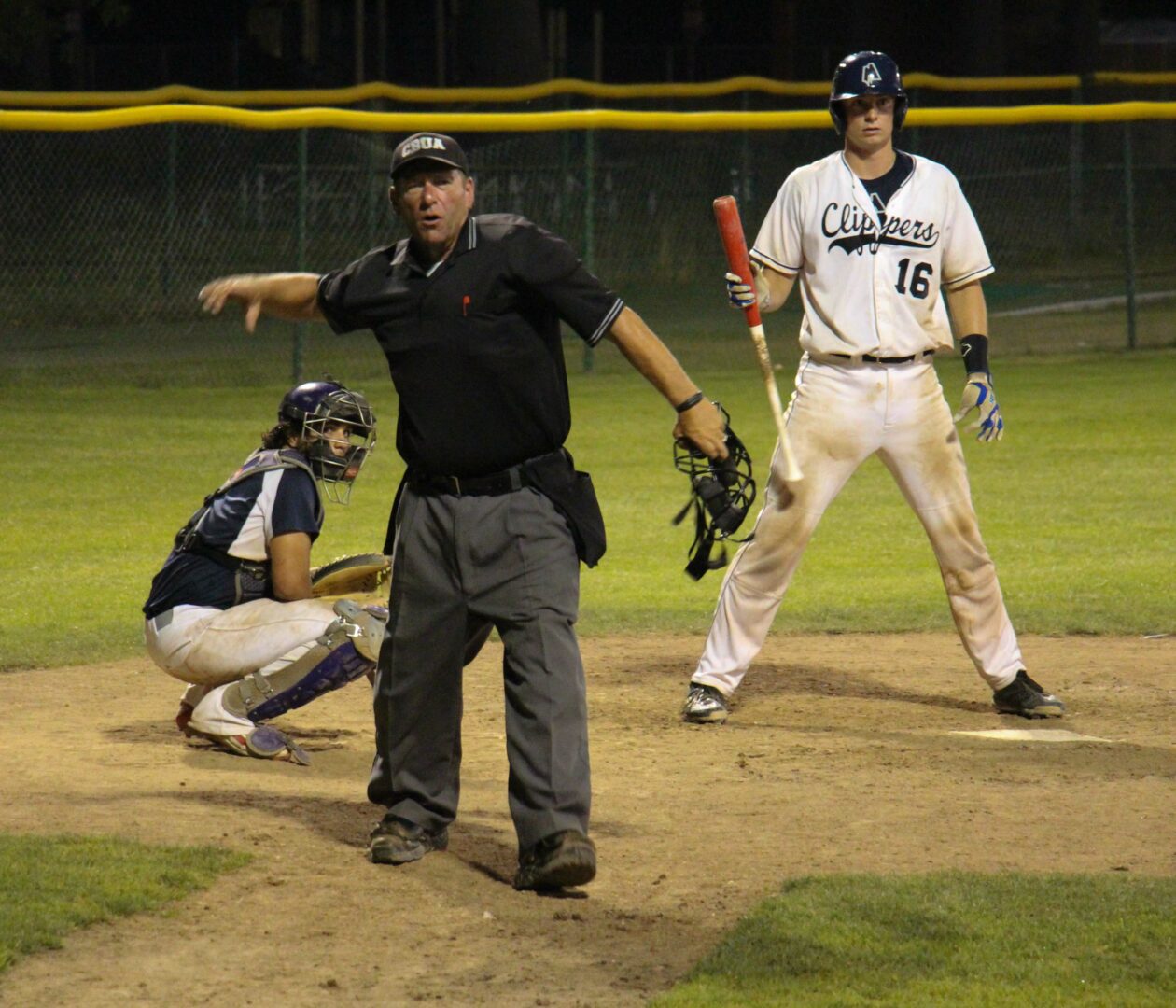 Home plate umpire gets ready to toss the Illinois manager in the eighth inning. Photo/Jason Goorman 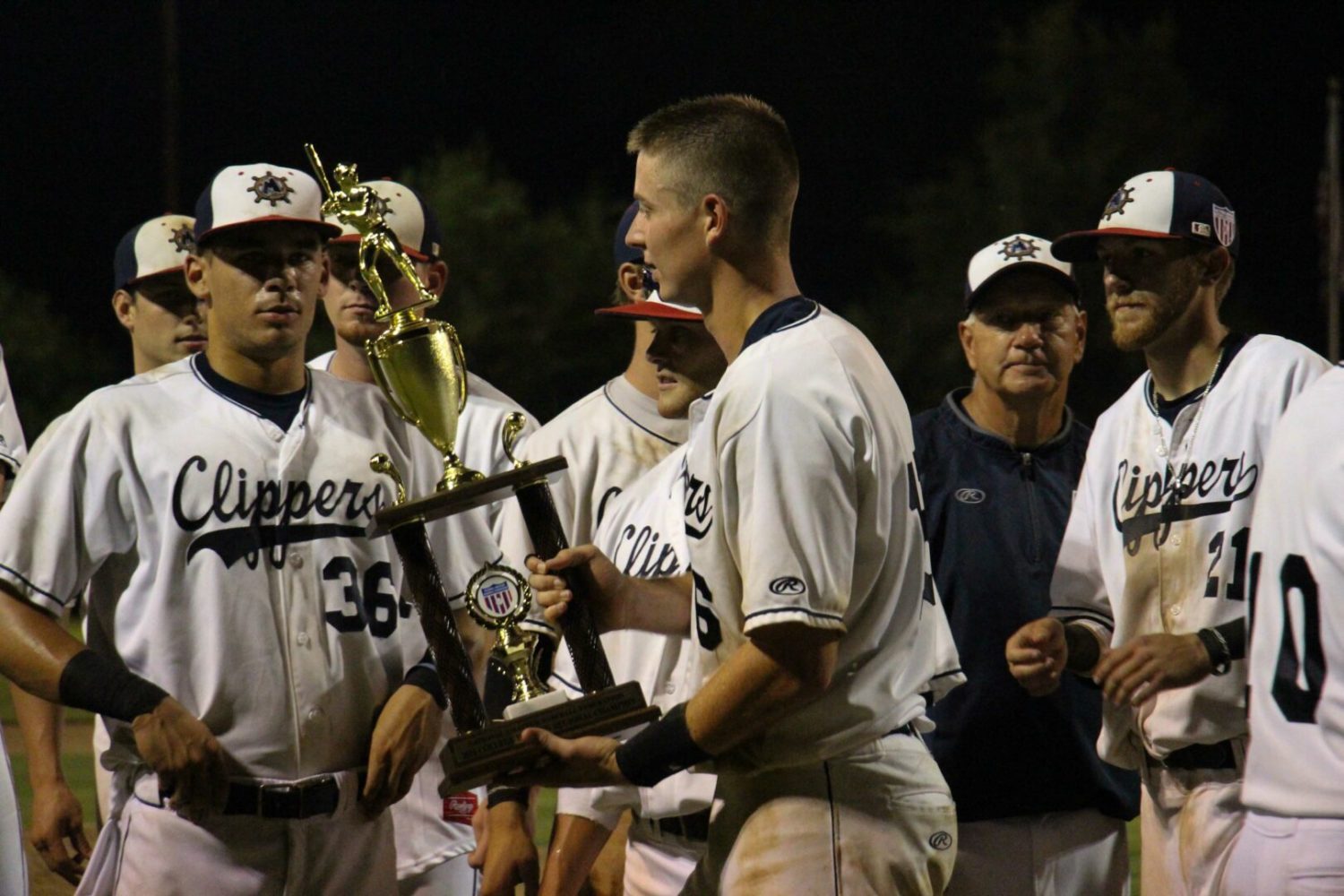 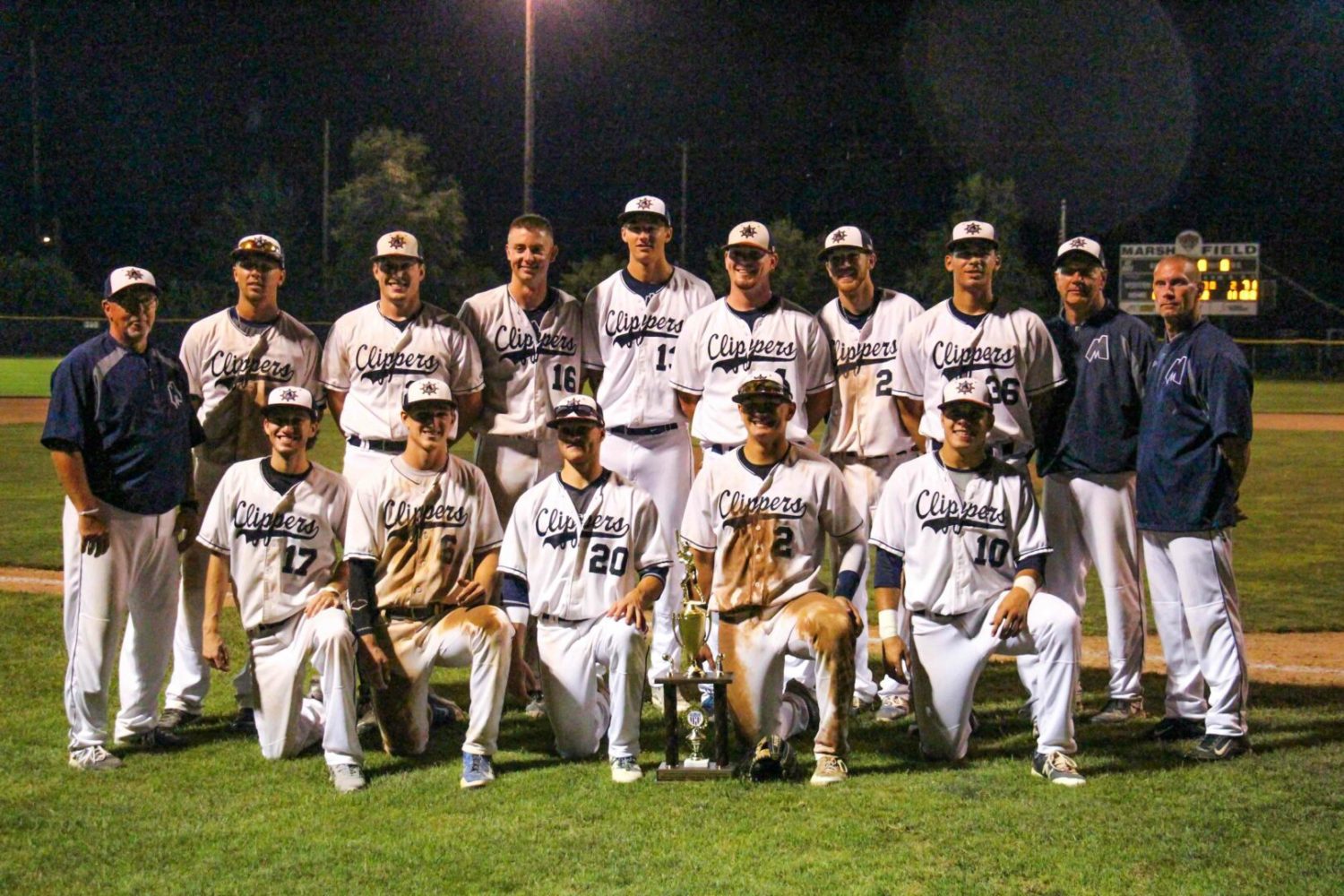 The Muskegon Clippers pose after winning the championship. Photo/Jason Goorman