FRUITPORT – The Fruitport Trojan won’t be playing in the postseason this year, but they felt like champions on Friday night.

That’s because they defeated an old rival, Reeths-Puffer, 21-6, in a game they

definitely had circled on the schedule.

In the process they ended the Rockets’ hopes of making the playoffs. Reeths-Puffer is now 4-4 (2-2 in the O-K Black Conference) with one game left, and it takes six wins to make the postseason.

The Trojans also provided a great goodbye gift to their seniors, who were playing the final home game of their career.

“I’m overwhelmed with emotion,” said Fruitport senior Bailey Lynn, who had a 95-yard kickoff return touchdown in the game. “I’ve been playing football since second grade and this was the last chance I had to play on this field.” 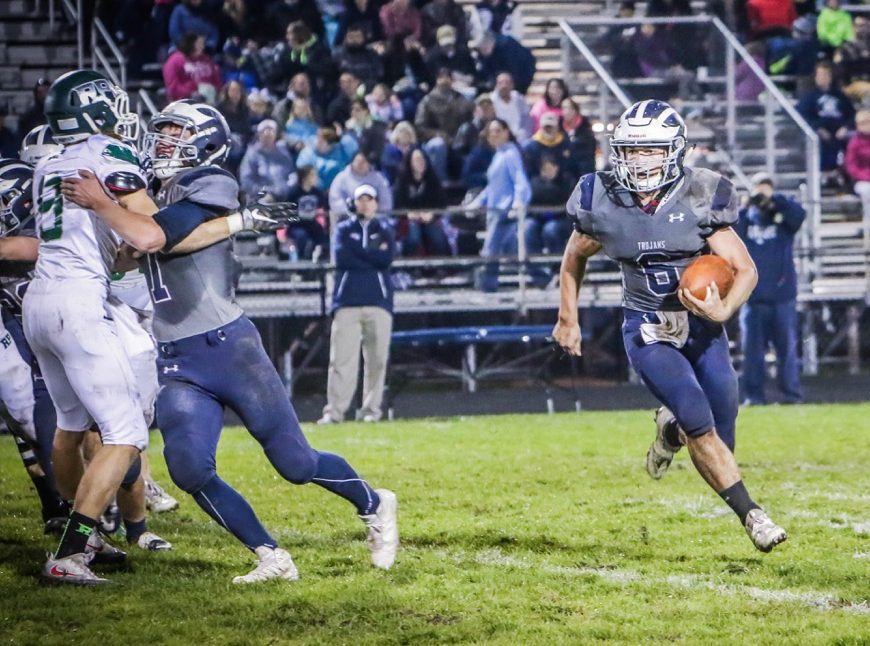 Levi Six rushes his way around the end. Photo/Joe Lane

The story of the night was the Trojan defense, which only allowed the Rockets 145 yards in total offense.

Reeths-Puffer standout running back Nate McCrary only managed 38 yards on 14 carries. Senior quarterback Blake Ross was 9-of-19 passing for 75 yards and one touchdown.

“I feel like our defense has taken some shots over the season because we’ve given up some points here and there,” said Fruitport head coach Greg Vargas, whose team last played Reeths-Puffer in 2013. “We felt like we’ve stopped the run well all season, though, and our kids really got after it tonight.”

The scoring started with 8:28 remaining in the second quarter when Fruitport running back Levi Six scored on a 47-yard run to give the Trojans a 7-0 lead. 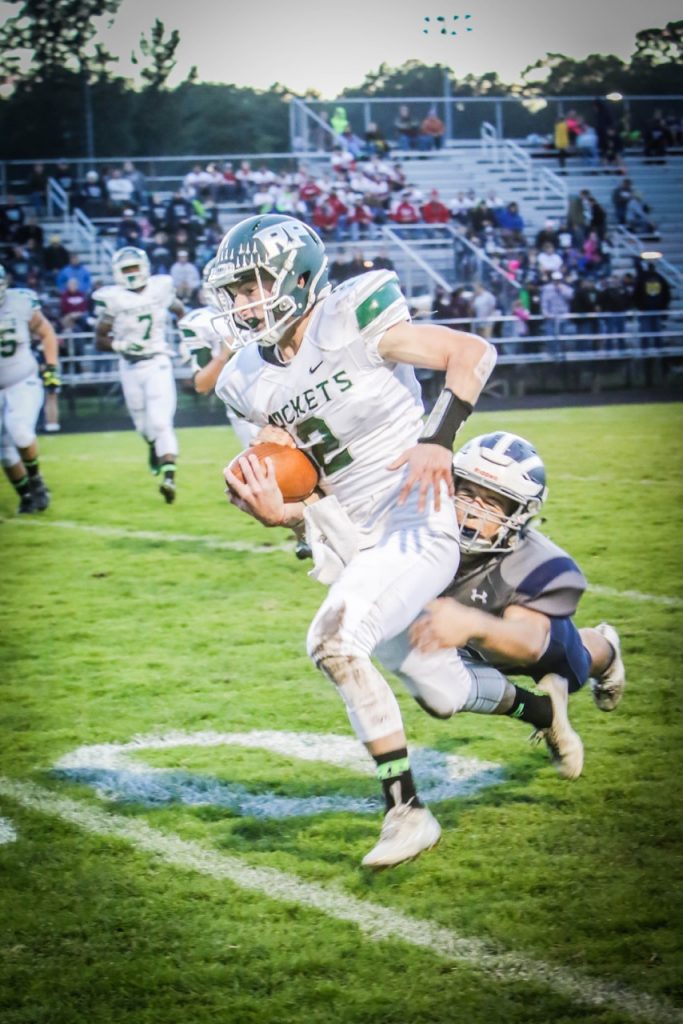 The Rockets responded on their next drive, going 74-yards on eight plays. Ross found Tylor Skinner with a 27-yard touchdown pass to make the score 7-6 in favor of Fruitport. The Rockets’ extra point attempt was blocked.

The Trojans marched down the field on the next possession, taking 13 plays to drive deep into Rocket territory. But Reeths-Puffer’s Collin Houseman picked off a Fruitport pass at the five-year line, leaving the score 7-6 at halftime.

The Trojans started pulling away on the opening kickoff of the second half when Lynn fielded the ball at his own five-yard line and raced up the right sideline for a 95-yard touchdown to give Fruitport at 14-6 lead.

“I didn’t see the lane the whole time, but it definitely opened up,” said Lynn about the runback. “I don’t know what heaven feels like but I’m sure it feels like that.”

Wyatt Kendra put the victory on ice for Fruitport with a 41-yard touchdown run with 2:07 left in the game.

Fruitport won the turnover battle 3-1, and Vargas believes that was a key to the victory.

Six led all rushers on the night with 91 yards on 17 carries while Kendra finished with 80 yards on 11 carries.

Kendra led the Trojan defense with nine tackles. Connor Schuitema and Corey Oleen each added an interception for the Trojans.

Nate Veihl had 13 tackles for Reeths-Puffer. 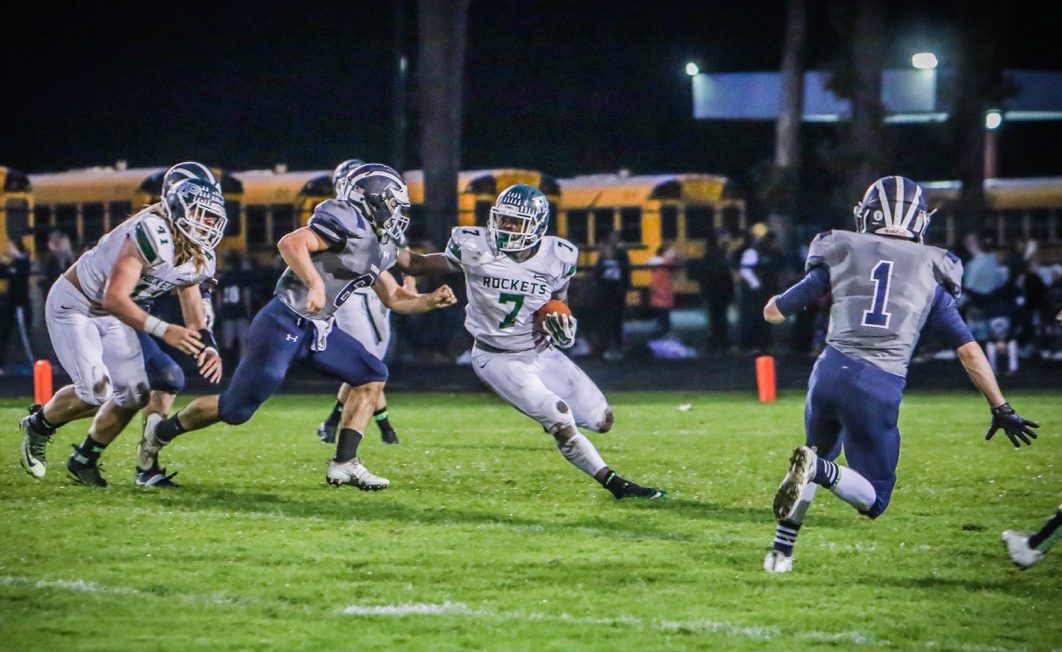 No. 7 Nate McCrary makes a cut on the Rocket rush. Photo/Joe Lane 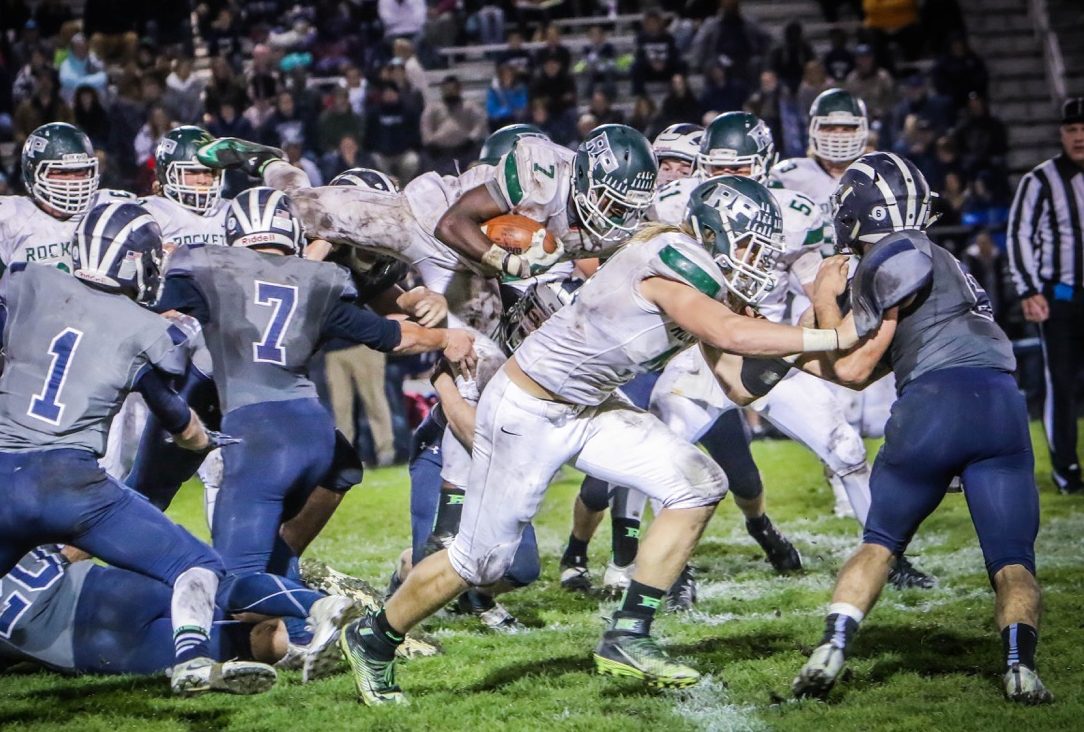 Nate McCrary makes his way through a sea of lineman for Reeths-Puffer. Photo/Joe Lane

Levi Six rushes his way around the end. Photo/Joe Lane 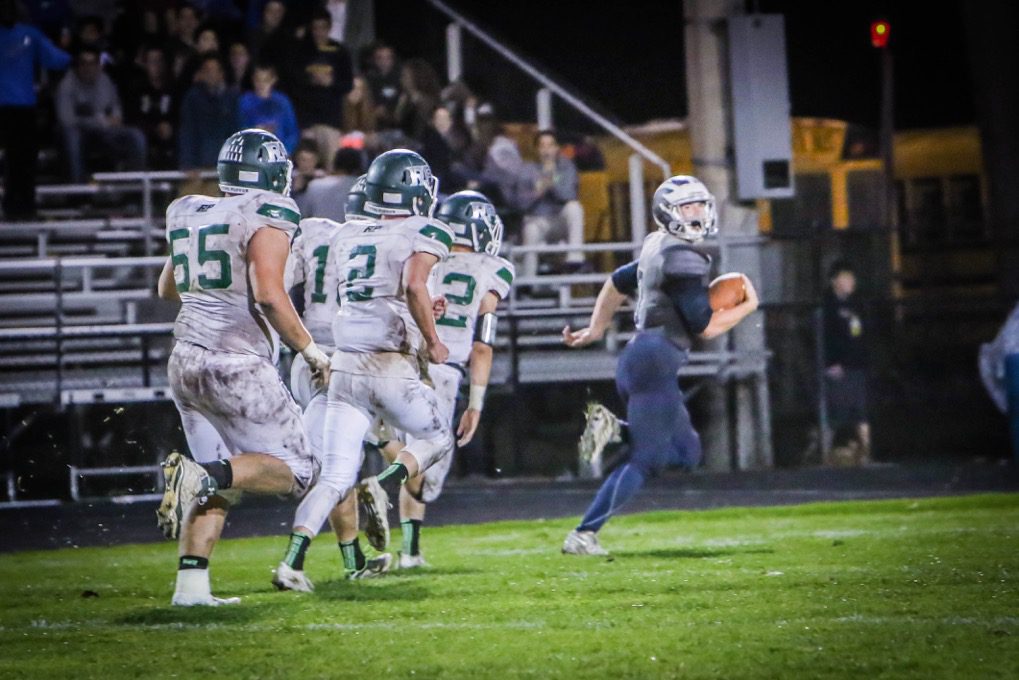