Whitehall’s Julie Brown has made huge progress this season, and so has her team

But usually those players are new to their teams. Sometimes they’re transfers, or super-talented underclassmen.

Rarely do veteran players improve so much that they help turn their teams from losers to winners.

But that happened this season for the Whitehall girls basketball team. Julie Brown was not a new player, but her improvement from one year to the next has made a huge difference for the Vikings. 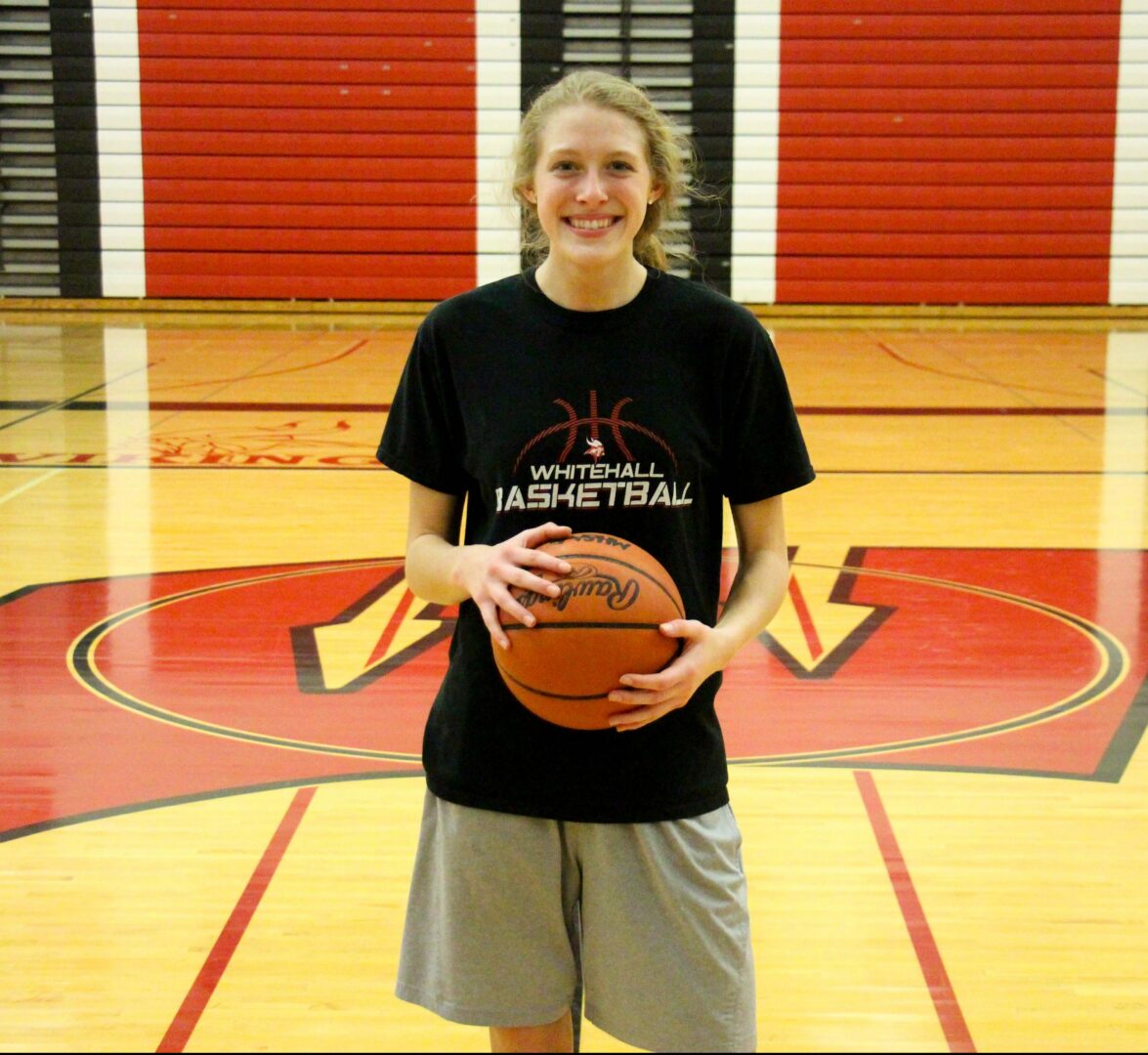 The Vikings finished the 2015-16 season with a 4-17 record, yet this season they’ve earned double-digit wins, and are currently sitting at 11-9 heading into this week’s district tournament.

The 5-foot-9 forward averaged eight points per game during the tough 2015-16 season, but has stepped up her game this year, averaging 15 points and 11 rebounds per game.

“She does it all and she has really done more than I even expected,” said Whitehall Coach Derek Westerlund. “We know that she’s a great rebounder and a really great scorer inside. She’s long and has really good hands inside, so she catches any pass. We’ve made comments that she looks like (former Detroit Lions star receiver) Calvin Johnson sometimes.”

“If your best player is one of your hardest workers and plays the game like they should, then your team is going to get better, and Julie is a perfect example of that.”

Brown and her teammates have worked hard for better results, and the outcome has been eye-opening.

The Vikings started the season 1-4, but had a five-game winning streak in the second half of the regular season to finish with seven more wins than the team had last season. 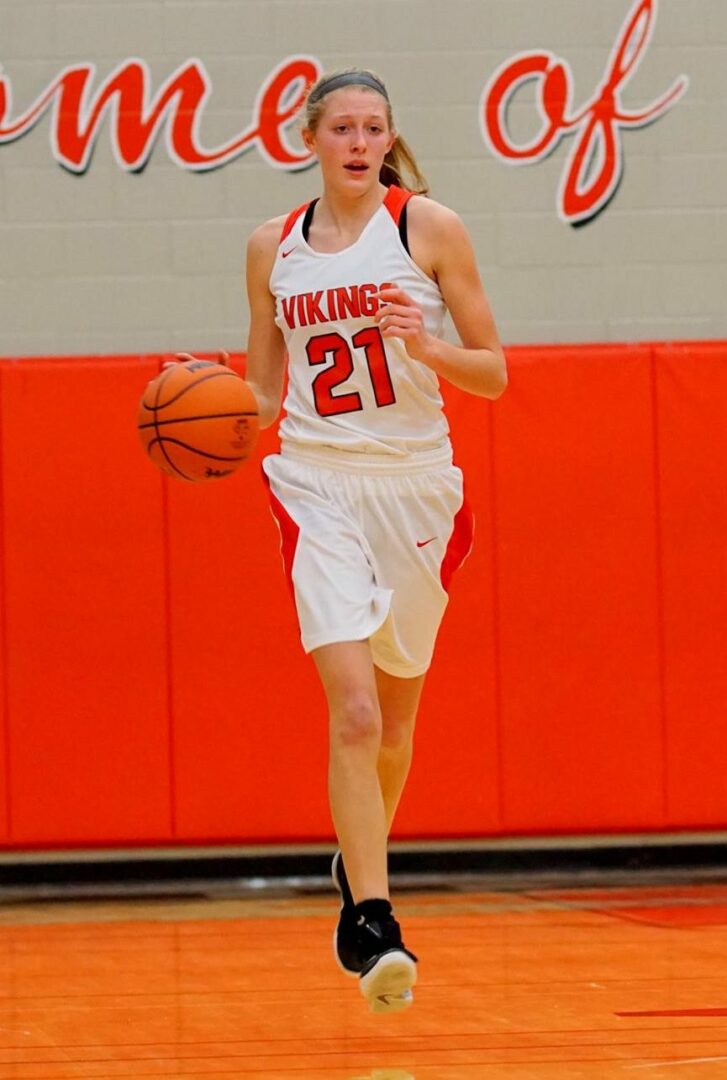 Julie Brown brings the ball up the floor for Whitehall in a game against Montague earlier this season. Photo/Leo Valdez

They accomplished that turnaround with six sophomores on the roster. That happened because Brown and her fellow upperclassmen stepped up and provided a great deal of leadership.

“The junior and senior leadership, the willingness to compete and work hard, and the expectation that we’re not just going to come and hang out in practice has changed this year,” Westerlund said. “Anytime you can get to that, I think your program can get better.”

While her offensive contributions are well-recognized by Whitehall fans, Brown’s effectiveness as a defender had made a huge difference for the team, Westerlund said.

“We’ve been putting her, always, on the best offensive player we’re going against, whether it’s a guard or post,” Westerlund said.

The humble Brown understands what makes her so hard to play against, but said she couldn’t accomplish much without her teammates.

“I want to score,” she said. “I want to work hard. I just want to win. But I couldn’t do anything without everybody else. Every time I score, it’s off an assist from someone. Every point is from a different part of the team.”

Finishing above .500, after last season’s four-win experience, was important for Brown and her team.

“We’ve just been fighting,” she said. “Fighting for every point, every play and talking and working as a team. We’ve done pretty good with that, and we’ve just kept moving forward all season.”

Whitehall is about to face its biggest challenge of the season, competing in the very tough Class B district tournament at Montague High School. The Vikings will open against a good Spring Lake team, with standout guard, Reiko Johnson, at 6 p.m.

West Michigan Conference champion Oakridge, as well as good teams from Fruitport and Montague, are in the other bracket of the tournament.

Brown has a lot of respect for Spring Lake, but says she will be more comfortable playing at Montague, a familiar venue where the Vikings have competed throughout their high school careers.

“I don’t necessarily think it will be an advantage, but I really like playing at Montague’s gym.” 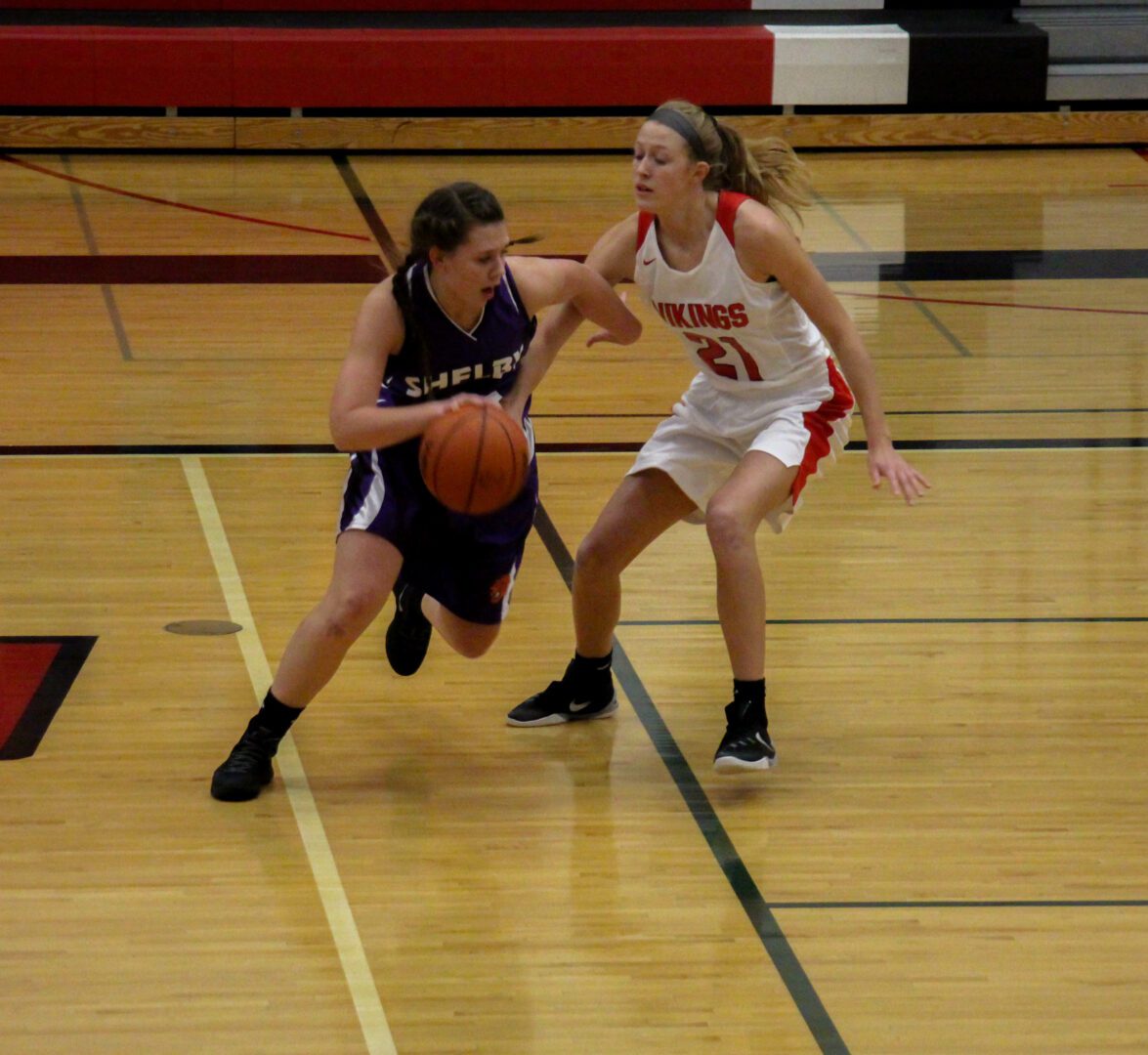 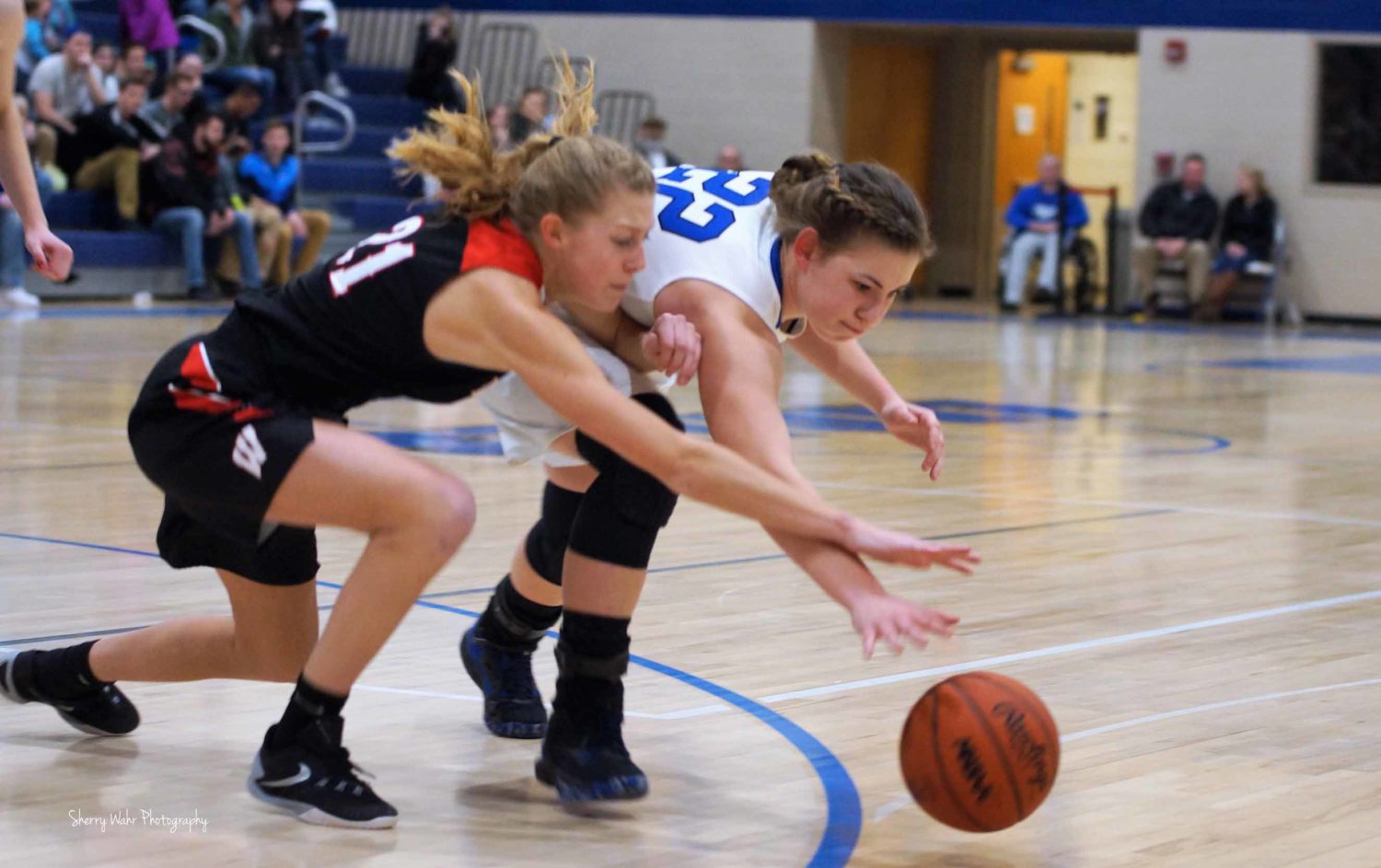 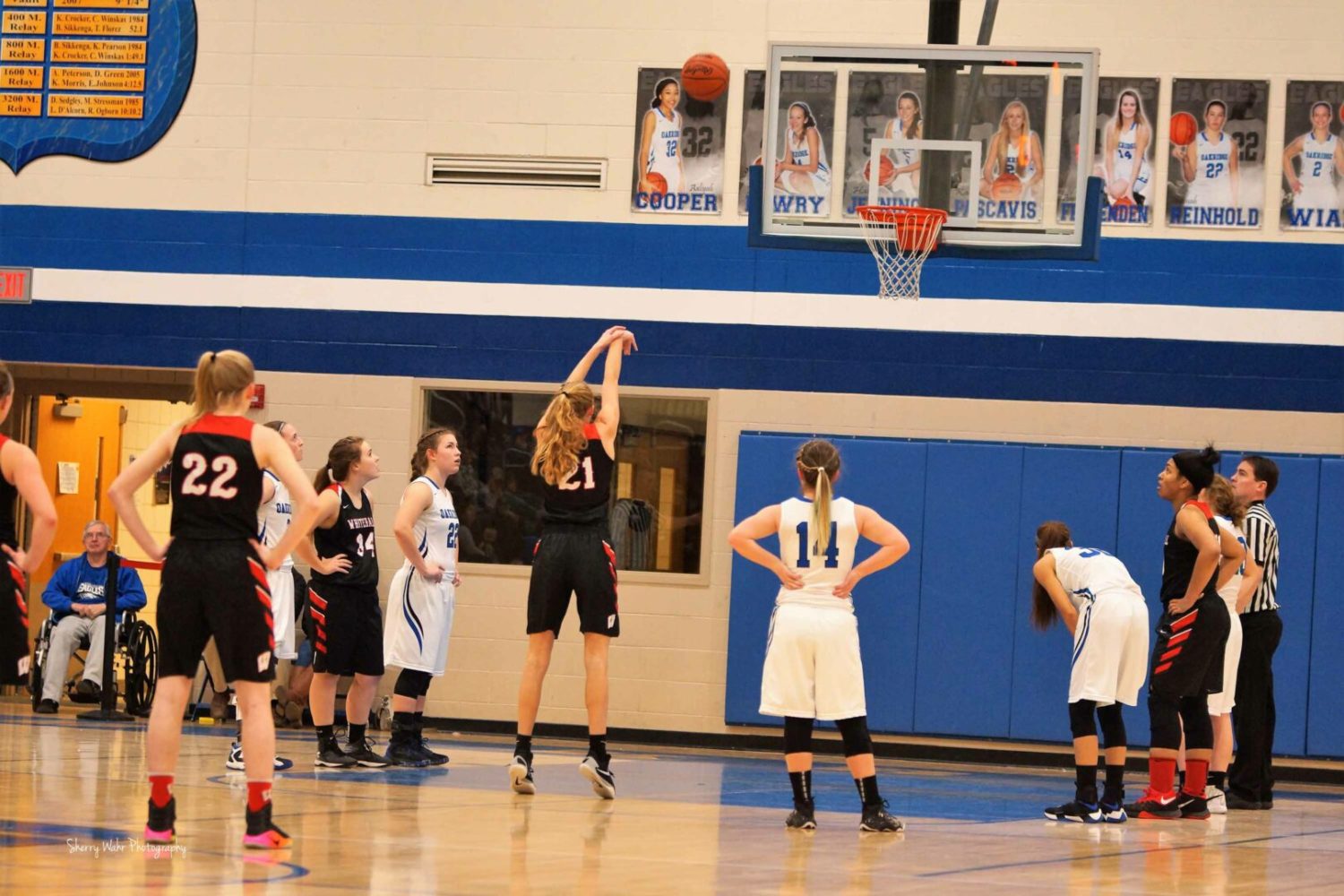 Lumberjacks captain Mason Jobst lost for the season with a shoulder injury: Rowe and Marody out for several weeks