MUSKEGON – The Muskegon Lumberjacks will have to wait to nail down a spot in the USHL Clark Cup playoffs.

The Jacks went into Saturday’s game against Fargo with a chance to secure their postseason spot. A Muskegon win,

combined with a Green Bay loss, would have sealed the deal.

Muskegon trailed Fargo 4-0 midway through the third period, scored two goals and seemed ready to make a game of it, but fell short.

“We had our chances on the power play, but we weren’t good all weekend, and that’s the disappointment,” said Lumberjacks Coach John LaFontaine. “Guys kept working and battling, but it’s hard when you get down.”

The Lumberjacks, whose three-game winning streak was snapped, fell to 34-18-4 on the season. They are in second place in the USHL Eastern Conference with 72 points, three points behind first-place Chicago. 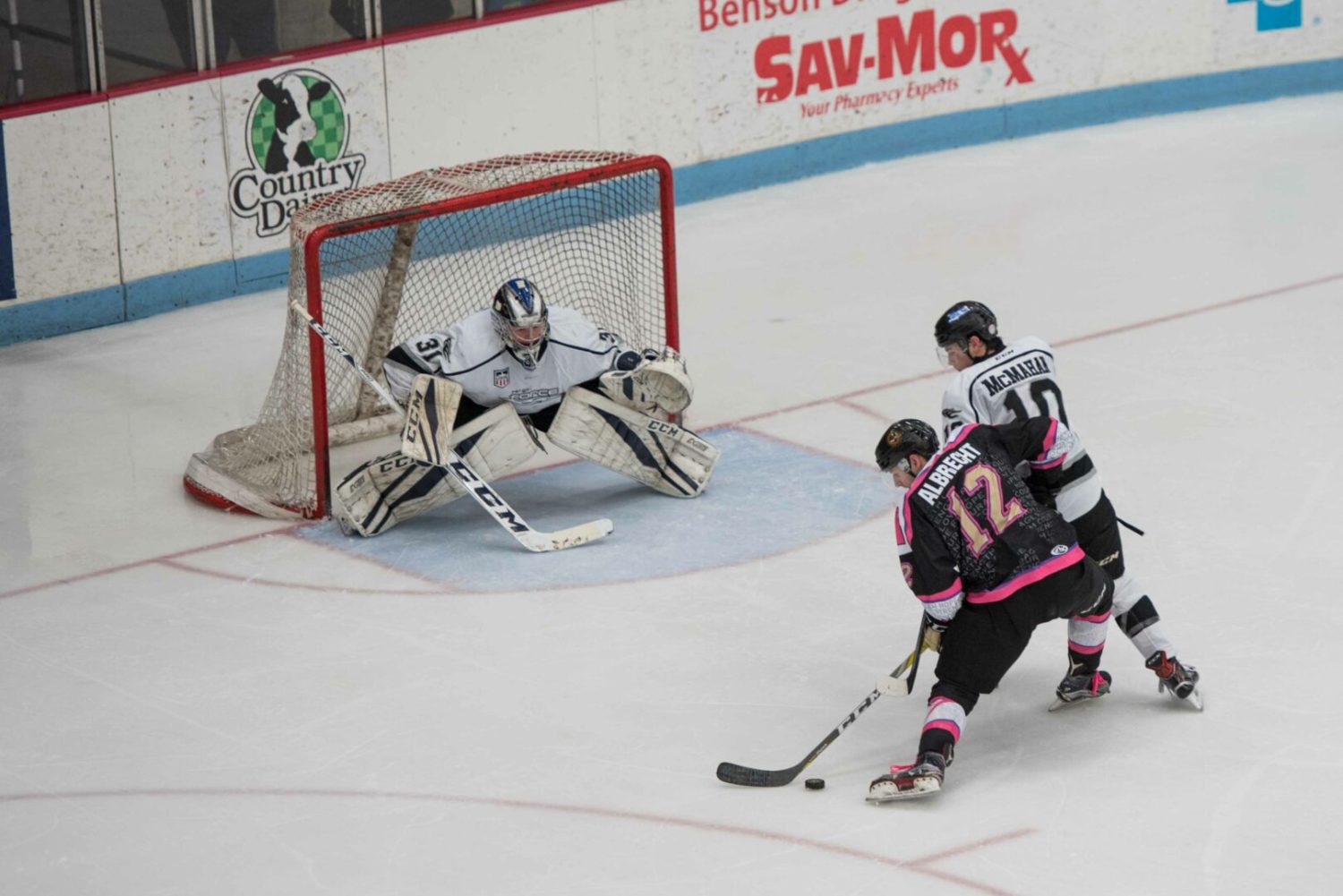 Austin Albrecht fights to get a shot off with a Fargo defender tying him up. Photo/Eric Sturr

They are four points ahead of fifth-place Green Bay in the race for the final playoff spot. The top four teams in the conference make the playoffs.

With the magic number at three, the easiest way for the Jacks to clinch a playoff spot would be to gain three points, which could be done with two wins for four points, or a win and an overtime loss for three points.

The Lumberjacks fell short against Fargo on the power play.

The Force opened the scoring on a goal from Kevin O’Neil at 6:20 of the first period. They increased their lead to 2-0 just over 10 minutes later with a goal by Jacob Paganelli.

Fargo added goals from Jack Adams in the second period and Hank Crone in the third to take a 4-0 lead.

The Lumberjacks ended Fargo’s shutout bid at the 11:16 mark of the third period on a goal from Colby Bukes. 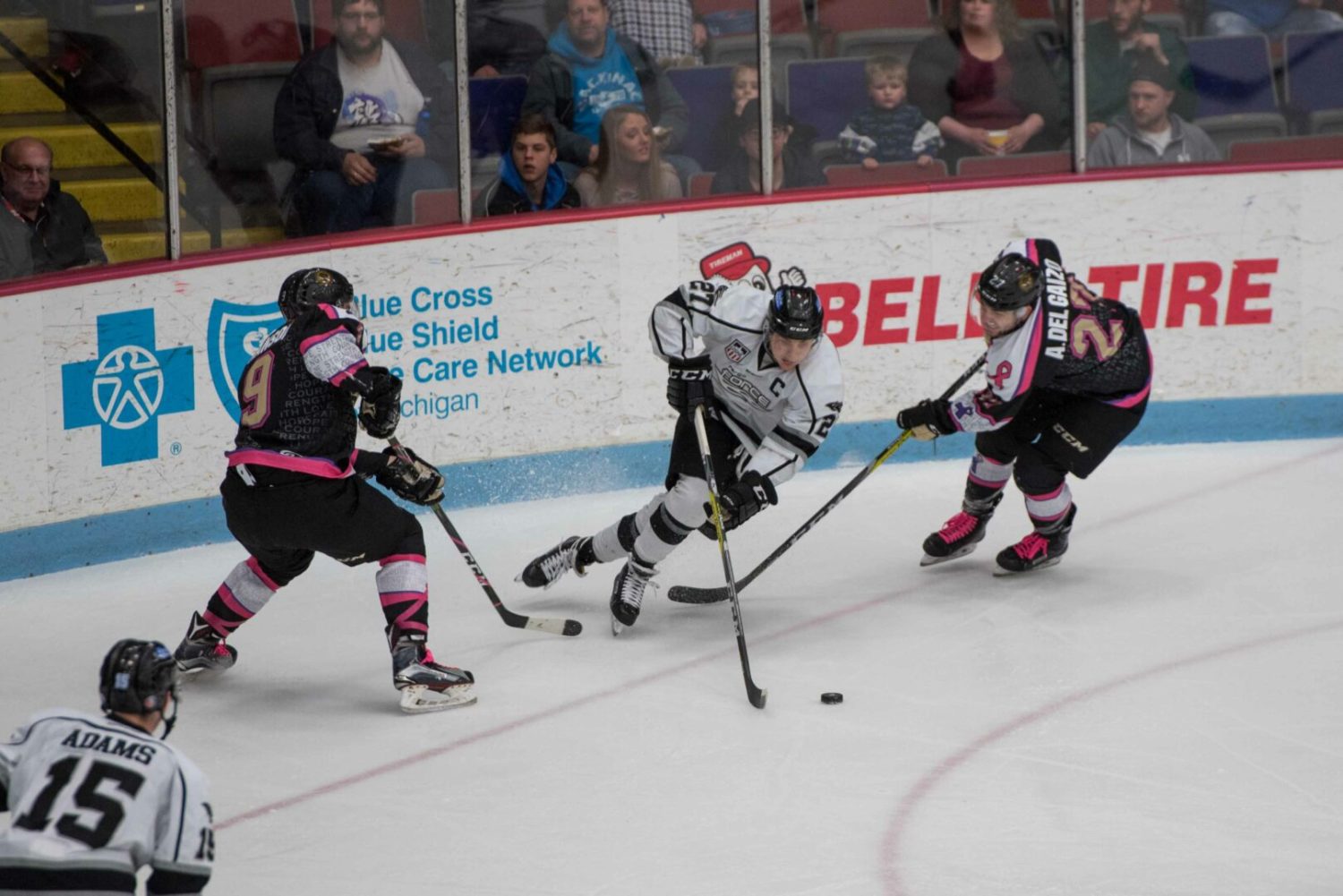 Bukes’ mother Debbie was in attendance for “Jacks Fight Cancer’ night. She is battling breast cancer, and her son’s goal made the evening special for the family.

“He is a great kid,” LaFontaine said about Bukes. “And boy does he love and care for his mother. She is a fighter and she is battling. As a team we are praying for her and his family, and want to make sure we give him our support.”

Lumberjacks’ captain Bo Hanson added a goal at 14:17 of the third period to make the score 4-2. Austin Albrecht and Austin Alger had assists on the tally.

But Muskegon’s comeback bid went no farther. The Force closed out the scoring with an empty net goal from O’Neil at the 18:54 mark of the final stanza.

Montague cruises past Shelby 53-3; game called at halftime due to injuries 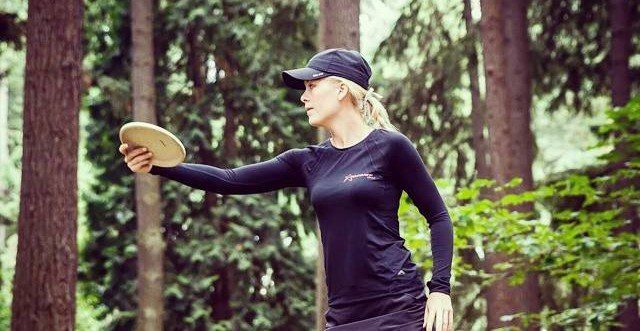