NORTON SHORES – The Mona Shores soccer team is banking on experience this year, with 13 seniors on the squad.

But on Tuesday it was a freshman who stole the show in the Sailors’3-1 non-league victory over Spring Lake on their home field.

Hayden Yaros scored two goals on consecutive shots in the first half, including the eventual game winner, making head coach Mike Apostle look good for putting him in the lineup.

“He worked hard in tryouts, so I said why not give him a try,” Apostle said. “Today, it looked like it was a good call.”

The victory was more than welcome for the Sailors, who were shut out by Grand Haven 3-0 in their season opener last weekend, and finished 2016 with a disappointing 6-12-1 record. 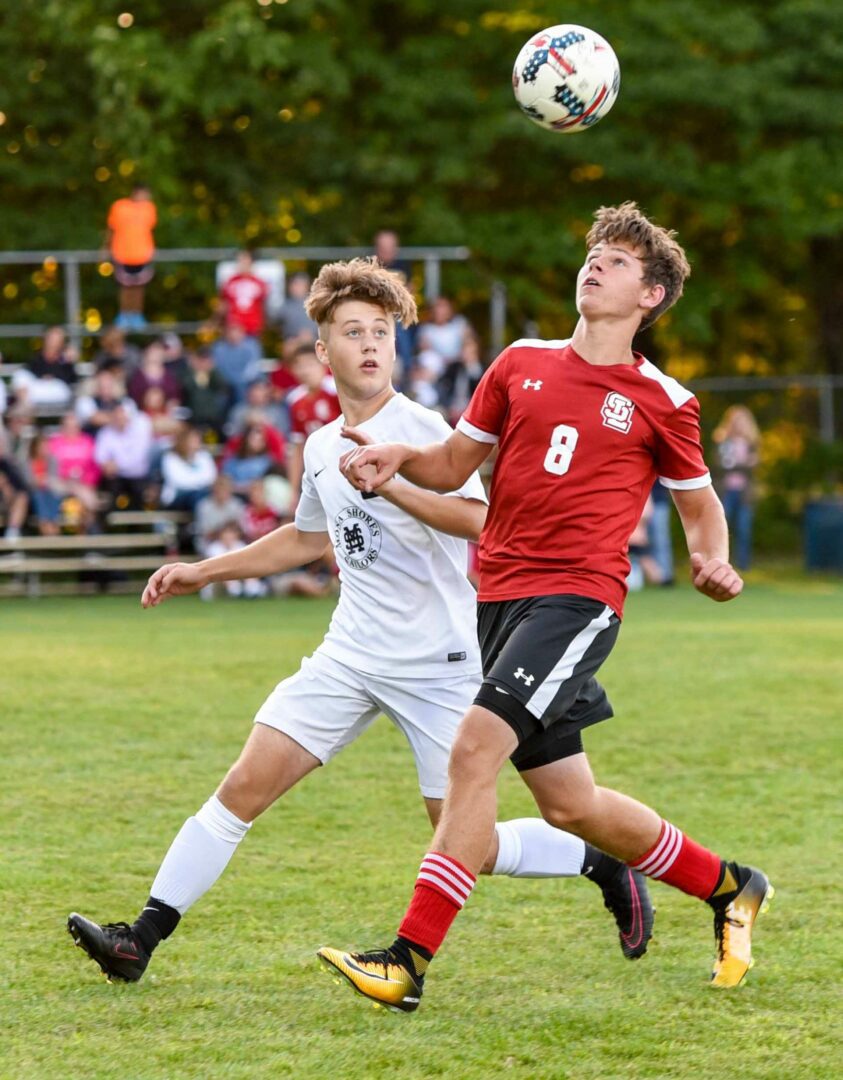 “We’ve got to see how the first five games go. It’s tough with Grand Haven, Spring Lake and Unity Christian (on Friday). We hope to be at .500 after the first four games. We’ll see how it goes the first four or five games and take it from there.”

The loss left Spring Lake with an 0-3 record, with is unusual for a team that has been dominant in recent seasons.

“Obviously, three games and three losses is not how we want to start,” Spring Lake head coach Jeremy Thelen said. “The guys have a choice and can either pack it in or we can step it up in practice tomorrow.”

This Lakers feature 11 seniors on their roster, but most were reserves last year, leaving this year’s team searching for its identity, according to Thelen. 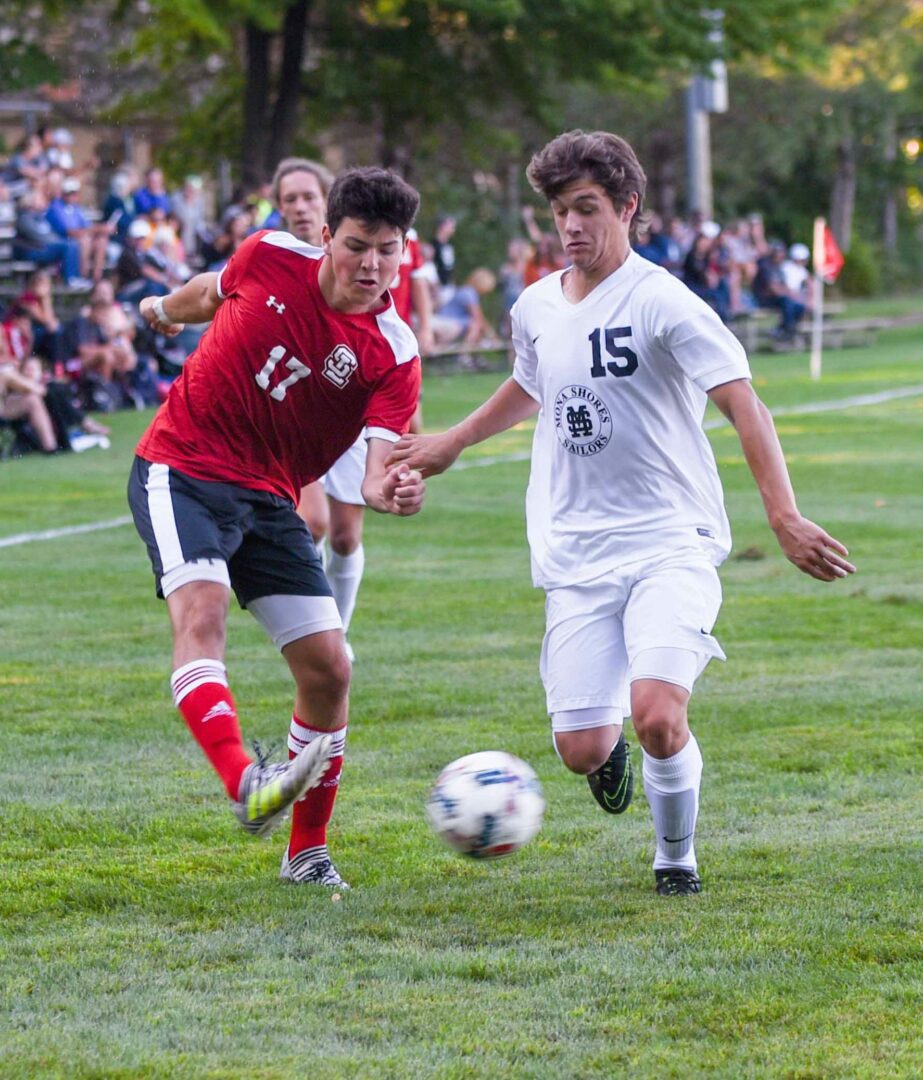 Eli Denslow (17) gets a shot off in front Anthony Sowles(15). (Photo/Eric Sturr)

“We have a lot of seniors coming back, but they were behind a talented class last year. We’ve got to kind of figure out who’s where and what’s going on and figure out our formations,” the coach said.

“We’ll just step it up from here and build as we go on in the season. I expect some work that will lead to wins.”

Spring Lake came out controlling the pace of play Tuesday, earning four corner kicks in the first 10 minutes, but was not able to capitalize.

Mona Shores got its first break with 20:22 remaining in the first half. Yaros broke free for a breakaway in the middle of the field and punched a low shot past the Spring Lake goalkeeper to put the Sailors up 1-0.

Yaros connected again less than two minutes later after receiving a pass on the right side and delivering another low shot past the keeper.

Spring Lake cut its deficit in half with 17:57 on the clock when Tommy Fine converted from the right side, but it was not enough.

Clark Meston added an insurance goal for Mona Shores with 13:54 to play in the second half. Cooper Sabourin earned an assist on the goal. 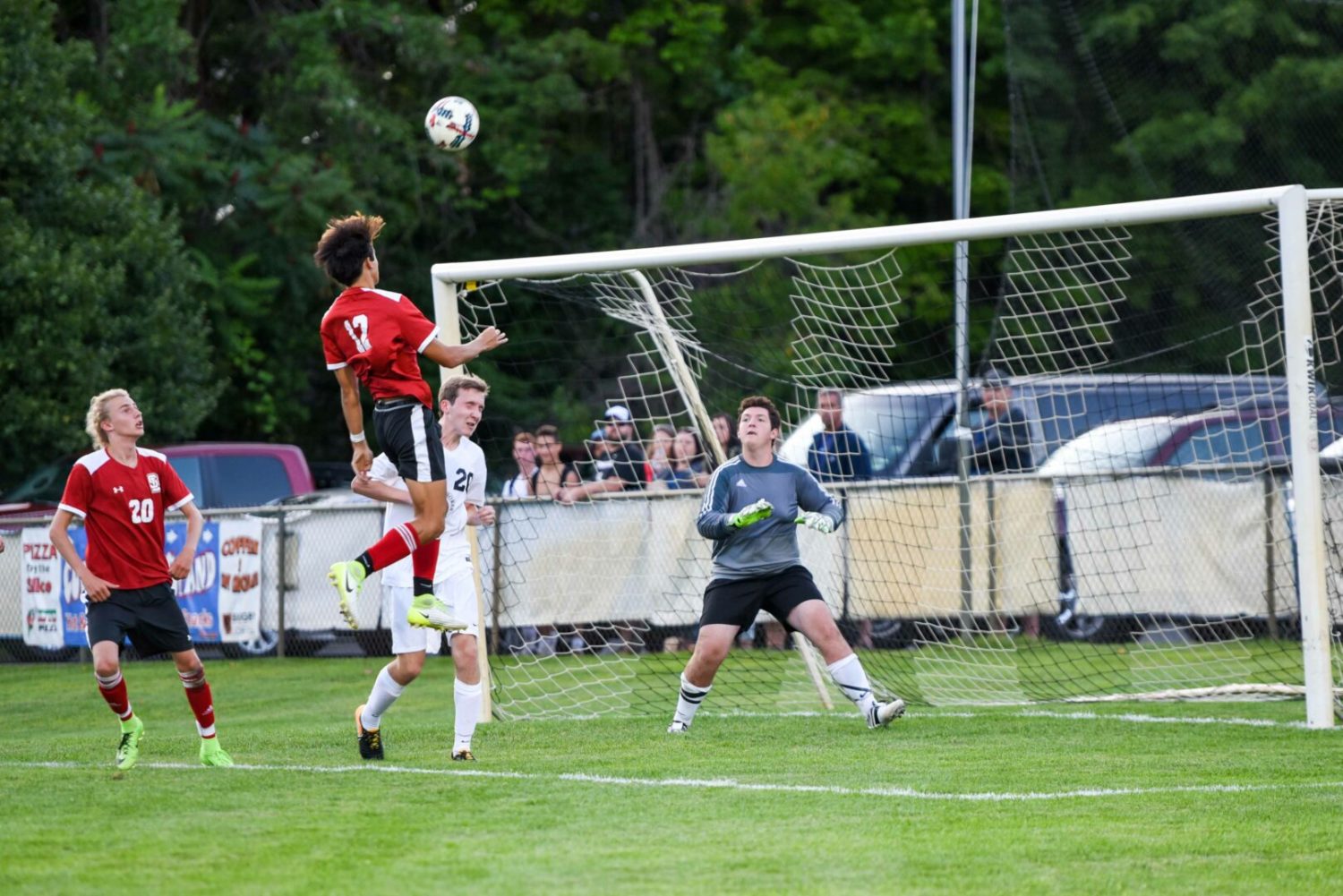 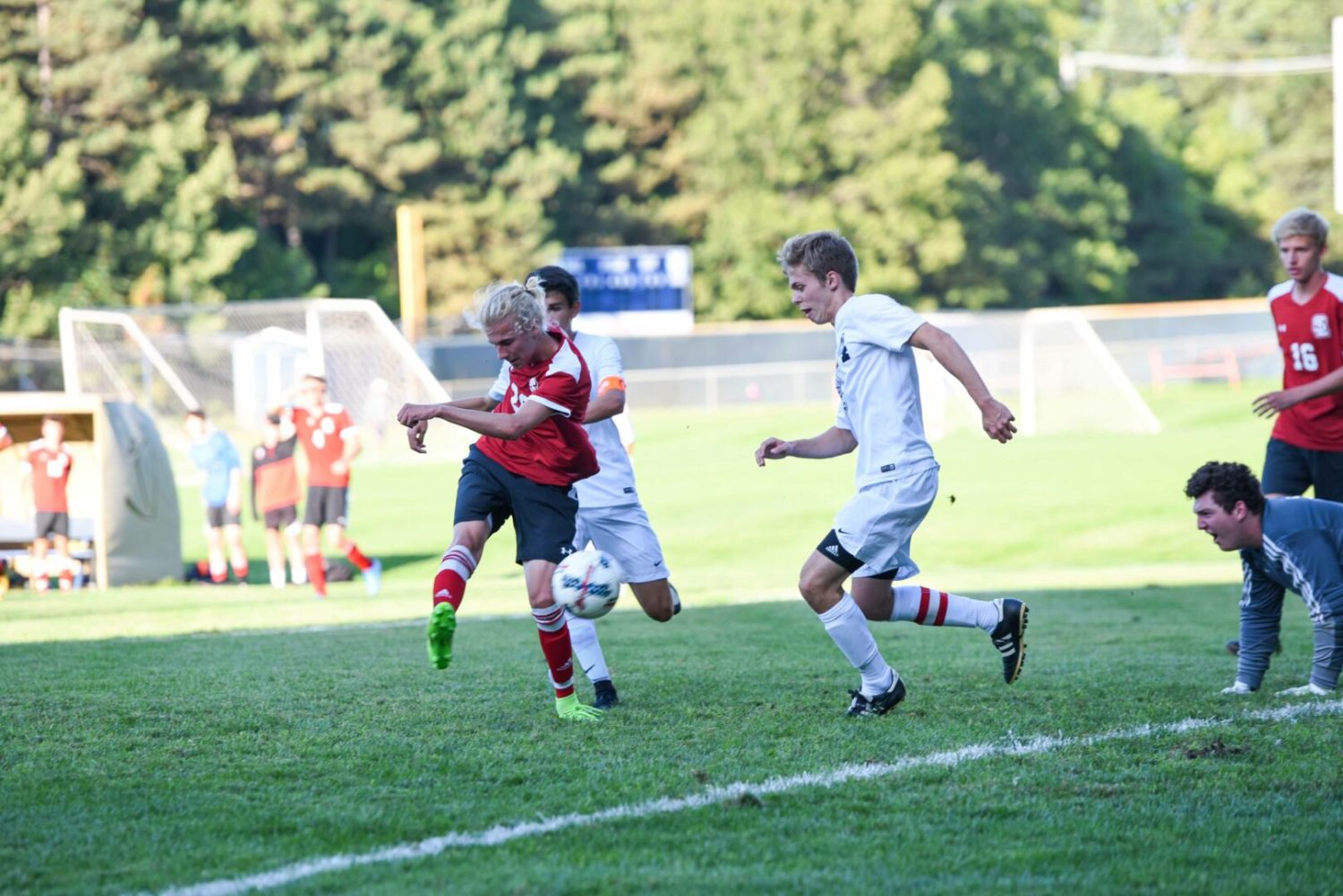 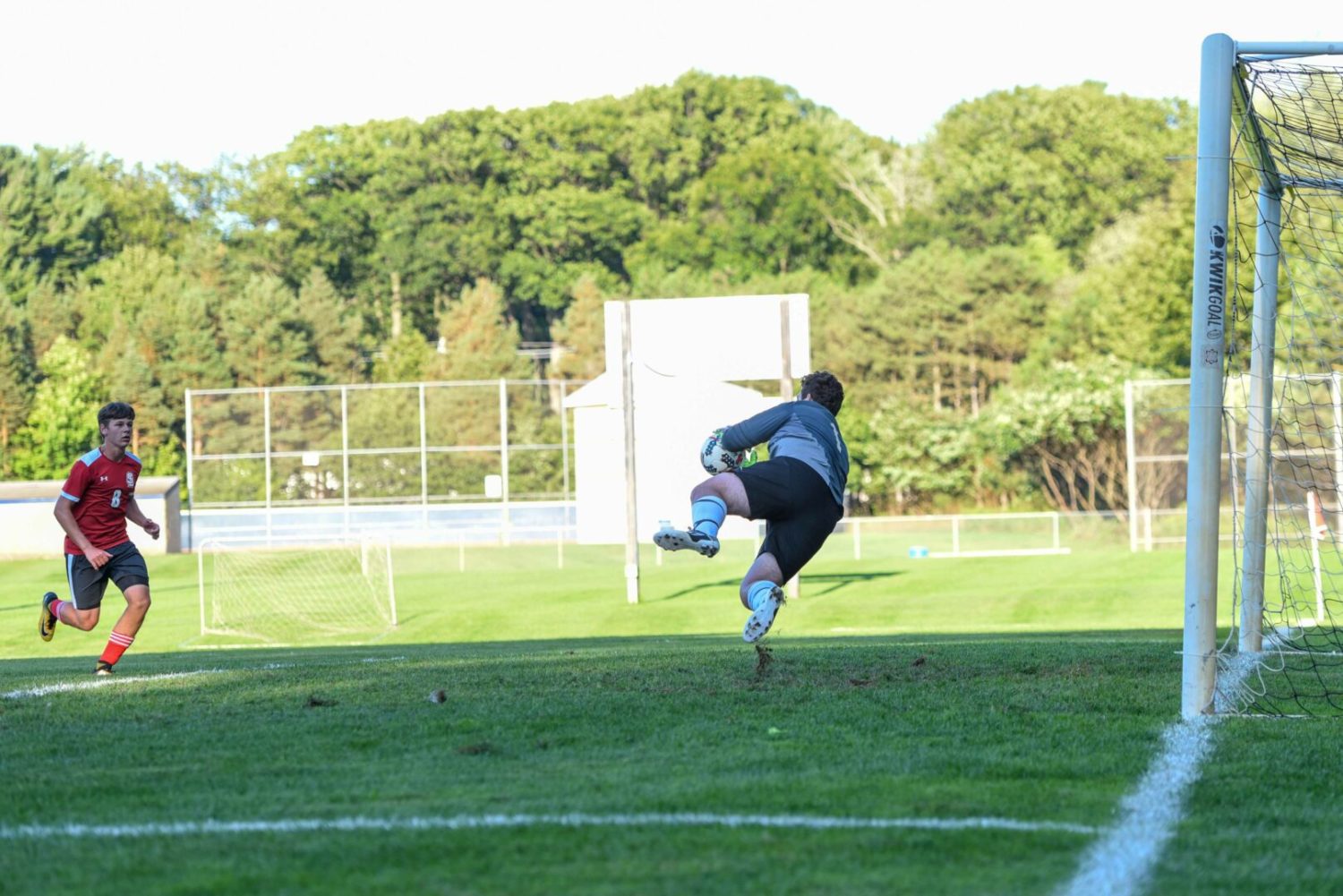 Mona Shores’ keeper Rocky Simonelle makes a diving save off a free kick from 20 yards out. (Photo/Eric Sturr) 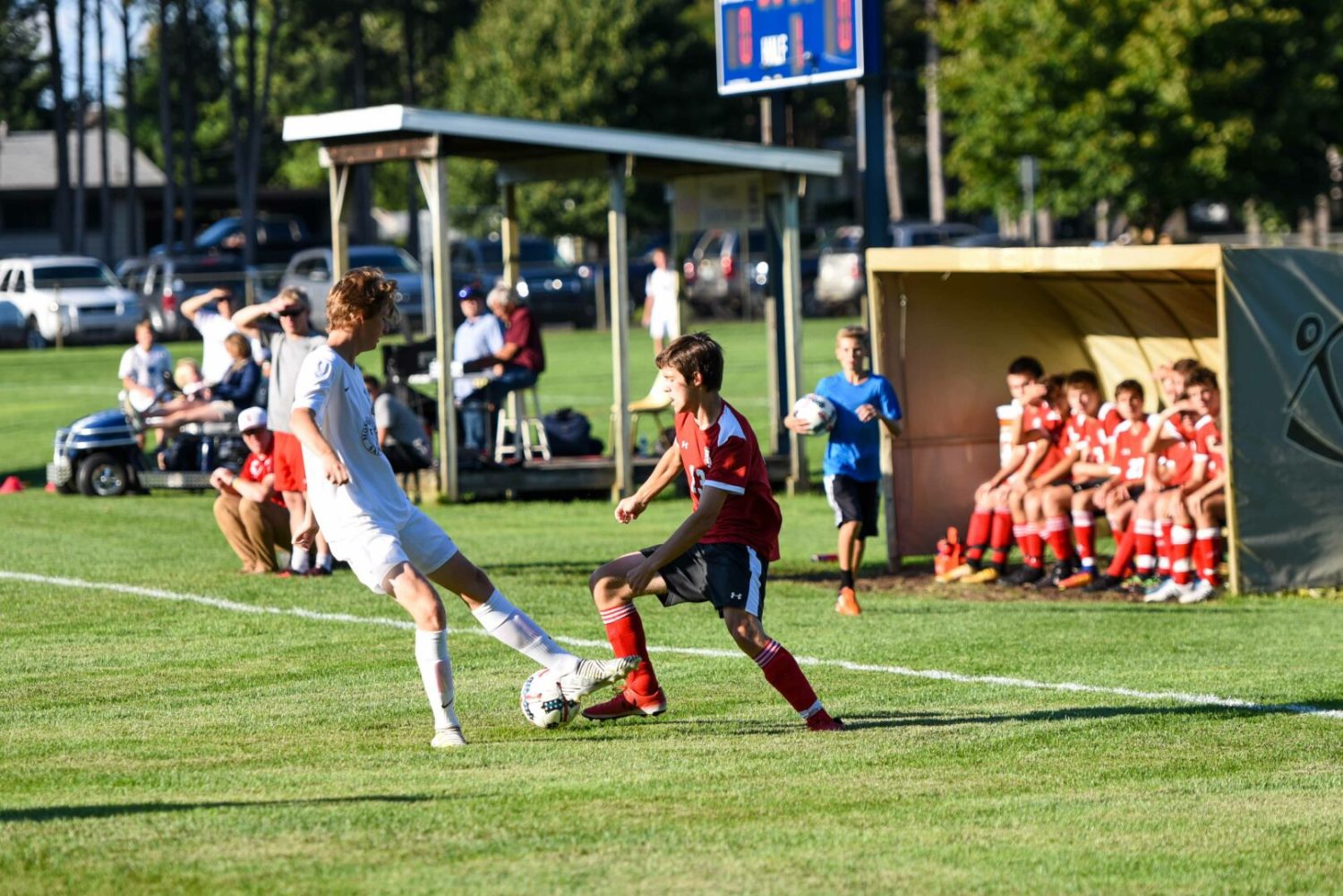