Matt Koziak said he was excited about his team’s potential, and couldn’t wait to show the Sailors off to the public.

After Saturday’s opening game at Michigan Stadium in Ann Arbor, a lot of people will understand what Koziak is excited about.

The Sailors overcame an early deficit, displayed a potent offense and made enough key defensive stops to post an impressive 41-23 victory over a good Canton squad in the “Battle at the Big House.”

“It’s awesome,” Koziak said moments after the game. “It’s one thing to play at the University of Michigan , but winning really is kind of icing on the top. 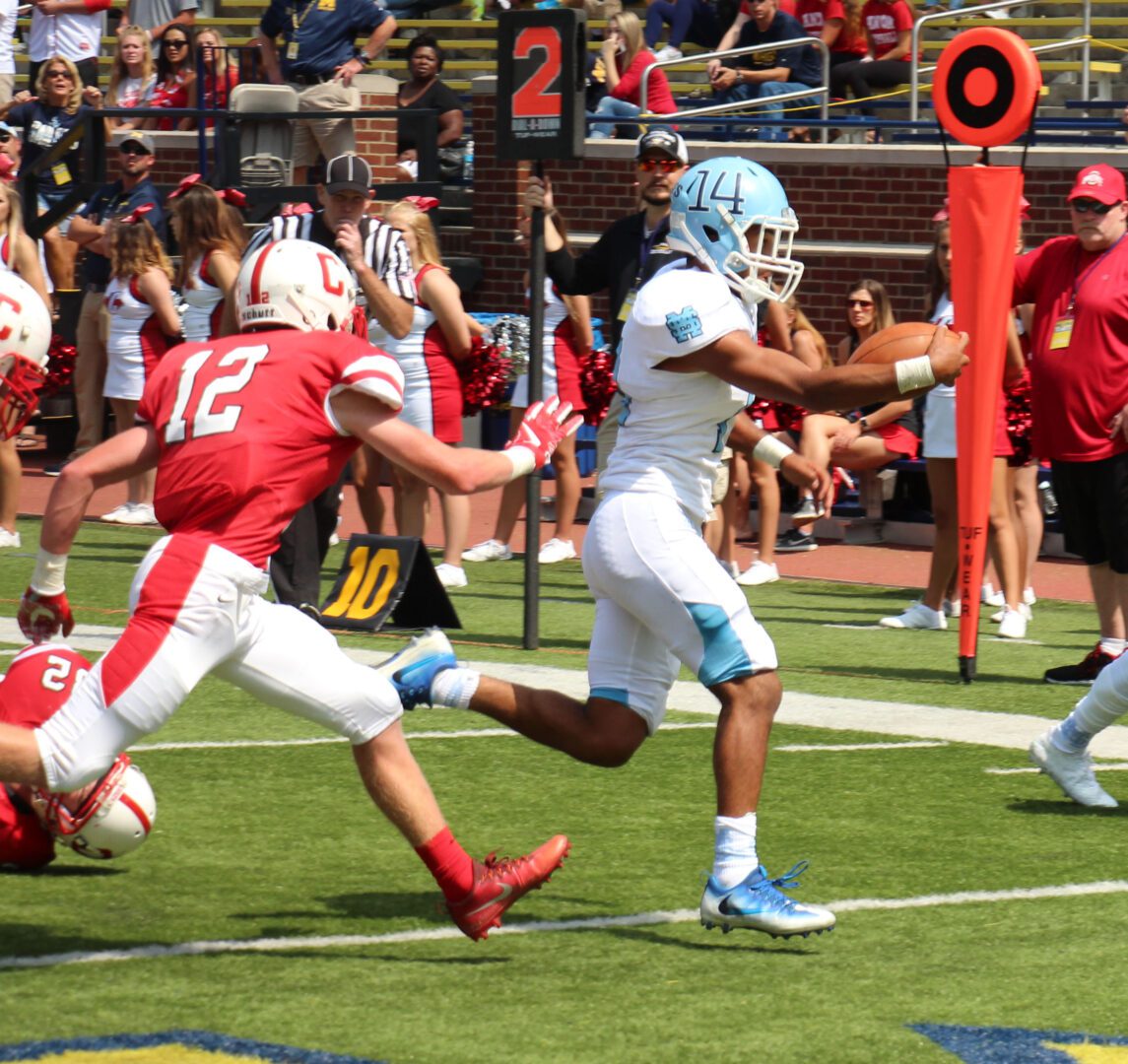 D’Anthony Davis finds the end zone for the first score for the Sailors. Photo/Jason Goorman

“I thought our kids played really well, and it was hot out. A lot of kids played both ways, so fatigue started setting in, but I thought we wore them down a bit, being in better shape. It just seemed like, at the end, we were getting extra yards and first downs.”

Things didn’t start out well for the Sailors.

Canton took the opening kickoff and drove 62 yards in six plays, capped by a three-yard touchdown run by Colin Trop.

But Mona Shores immediately answered on its first possession, driving 62 yards in 12 plays for a touchdown. D’Anthony Davis found the end zone for the Sailors with a nine-yard run. The conversion attempt failed, leaving Canton with a 7-6 lead.

The Sailors’ defense tightened up after that, forcing Canton to punt on two straight possessions.

Mona Shores took the lead for good with a four-play touchdown drive covering 59 yards. A key play came on second down from the Sailor 45, when quarterback Tristan Robbins completed a 38-yard pass to Keyshawn Summerville. 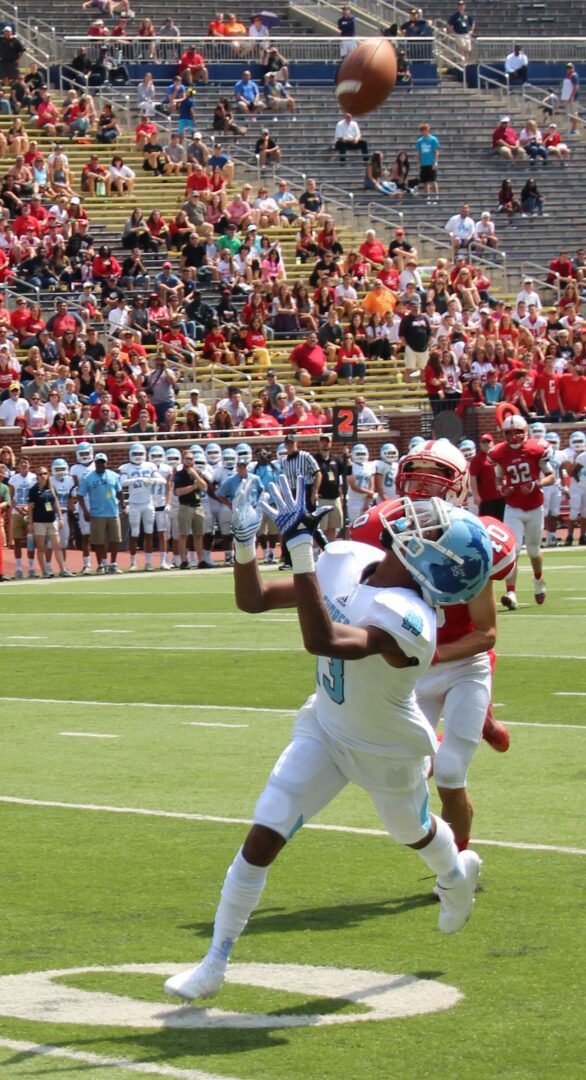 Keyshawn Summerville gets ready to haul in a big second-quarter catch for Mona Shores. Photo/Jason Goorman

Robbins ended the drive with a seven-yard touchdown run with 8:14 left in the second quarter. Robbins added a two-point conversion run, giving the Sailors a 14-7 edge.

After another Canton punt, the Sailors displayed their creativity under challenging circumstances. They took possession on their own 35 with 7:38 left in the half and moved the fall consistently forward, only to have four plays called back on penalties.

The Sailors made several key plays on the long drive, including pass completions of 15 and 13 yards from Robbins to Summerville, a 16-yard keeper by Robbins and a 15-yard run by Davis. A pass interference call on Canton also gave the Sailors 15 useful yards.

Mona Shores finally scored on the 15th play of the drive on a two-yard run by Davis. The extra point by Austin Flowers was good, giving Mona Shores a 21-7 lead with 3:06 left in the half.

“I think it speaks volumes about our kids,” Koziak said about the long drive. “They understand the next-play mentality. They could have hung their heads but I think it’s a tribute to our kids and their strong mental state.

“For them to do that, I was really proud of them.”

Canton responded with a quick touchdown drive, capped by a two-yard run by Nick Polydorus.

But Mona Shores counterpunched again when Damari Roberson fielded the ensuing kickoff and raced 92 yards for a touchdown. Flowers added another extra point and the Sailors led 28-14.

Canton kicked a 30-yard field goal just before halftime and Mona Shores led 28-17 at the break. 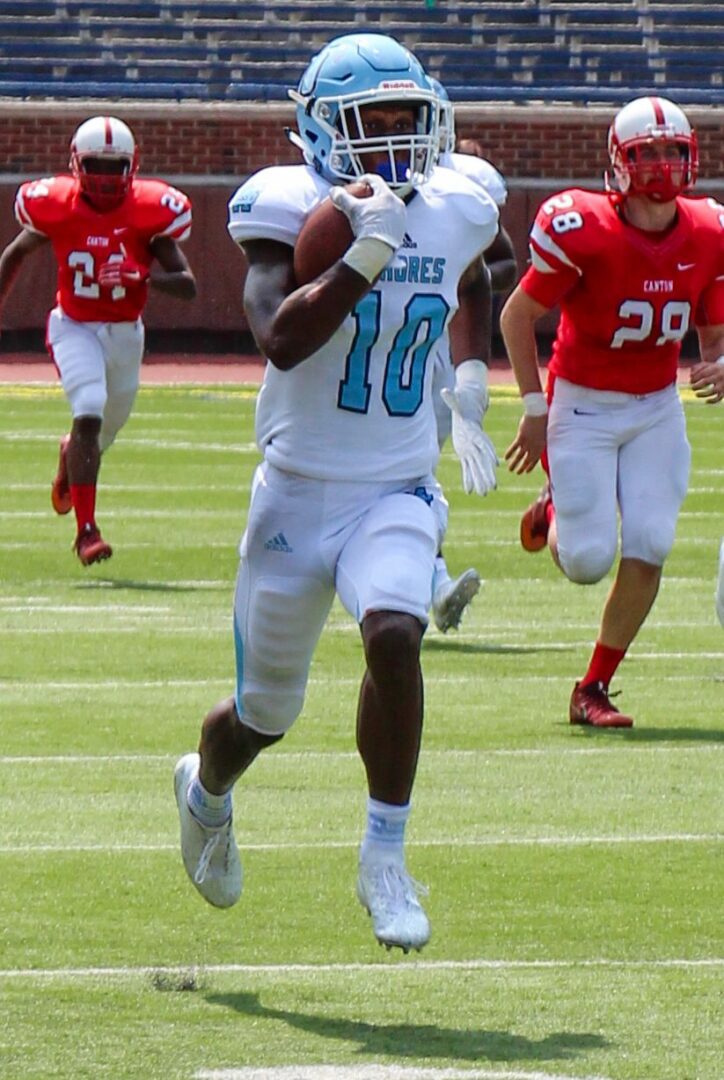 Damari Roberson blows away the defense on his 92-yard kickoff return for Mona Shores. Photo/Jason Goorman

The Chiefs scored on their first possession of the third quarter that took about nine minutes off the clock. Polydorus scored from two yards out, the conversion kick missed the mark, and the Sailors clung to a 28-23 lead.

But Mona Shores responded quickly, covering 65 yards in four plays to take a 35-23 lead with 51 seconds left in the third quarter. The big play of the drive was a 37-yard bomb from Robbins that Roberson hauled in at the Canton 7-yard line.

Sincere Dent capped the drive with a seven-yard TD burst.

The Sailors took control for good when Josh Hill recovered a Canton fumble near midfield early in the fourth quarter. Dent finished the scoring four players later with a four-yard touchdown run.

Robbins completed 7 of 13 passes for 129 yards and rushed for 90 yards and a touchdown on 13 carries.

Davis rushed for 104 yards and two touchdowns on 13 carries. Dent finished with 65 yards, including two touchdowns, on eight carries.

“It felt pretty good,” Robbins said about his performance. “I’ve improved on my running game a little from last year, so it was exciting to show that off.

“It’s all about the guys up front getting movement off the ball. They are where it all starts and you can’t do anything without them.” 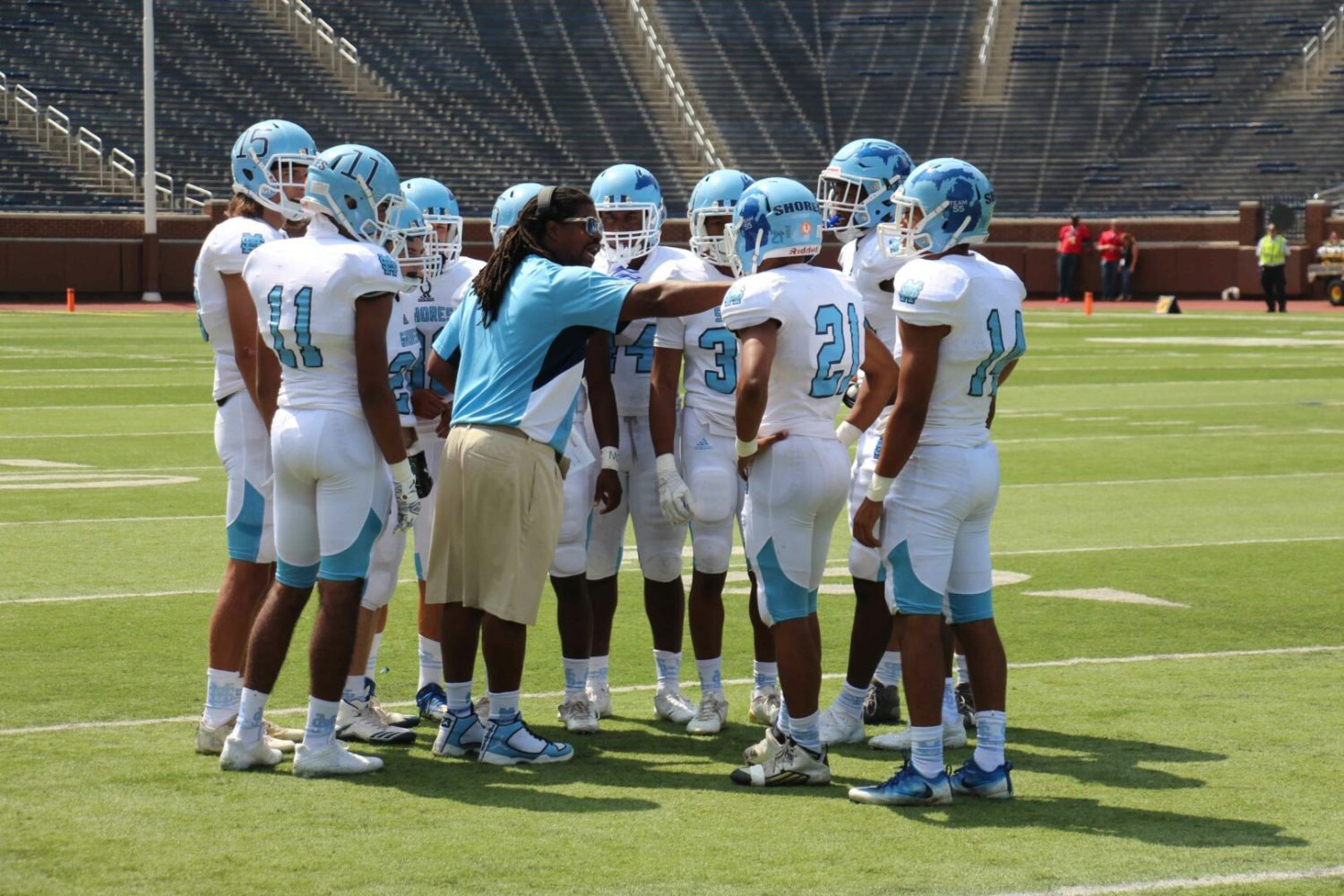 Holsey James talkes to the Mona Shores squad getting ready to take the field. Photo/Jason Goorman 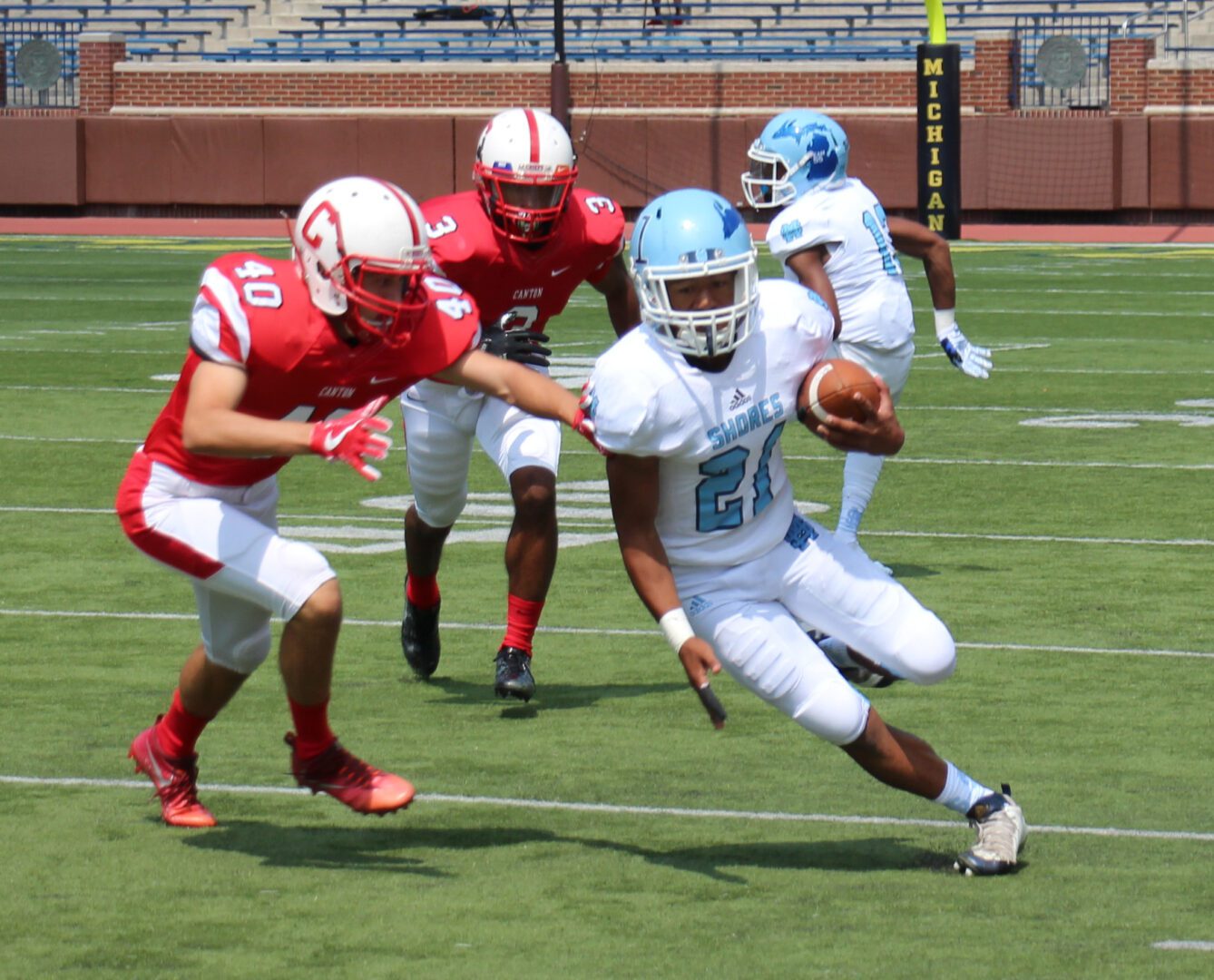 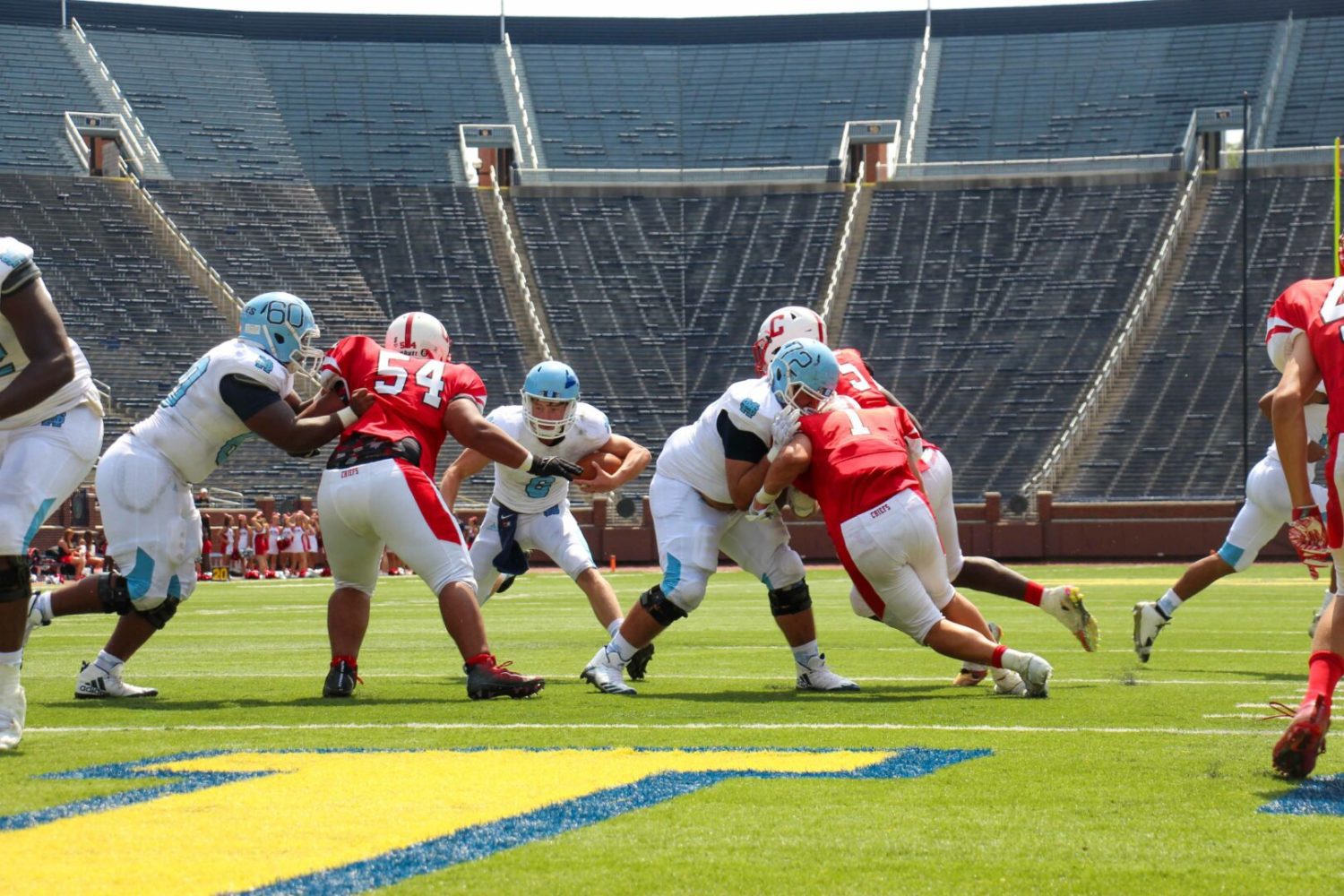 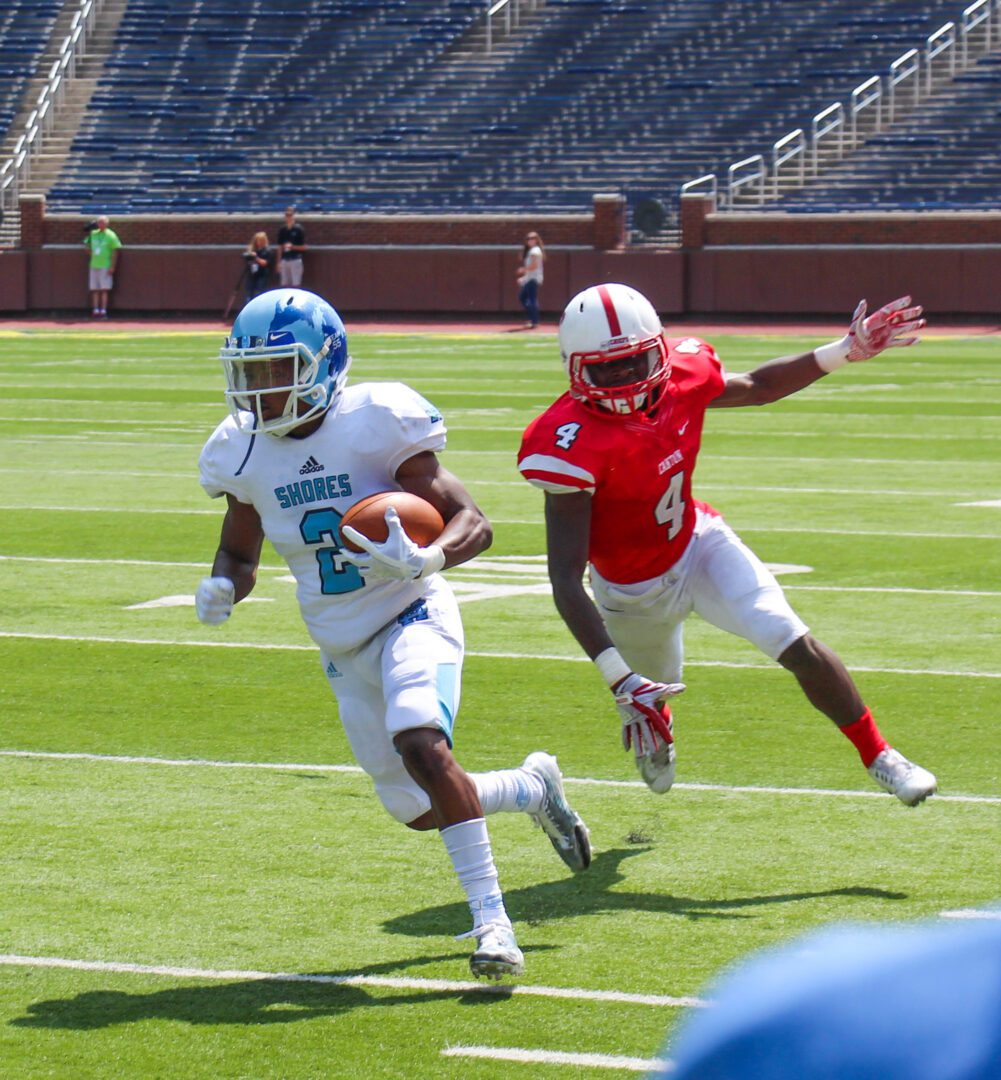 Ke’Sean Sandifer makes a cut on the wideout for a run to the end zone that was called back after a illegal procedure penalty. Photo/Jason Goorman 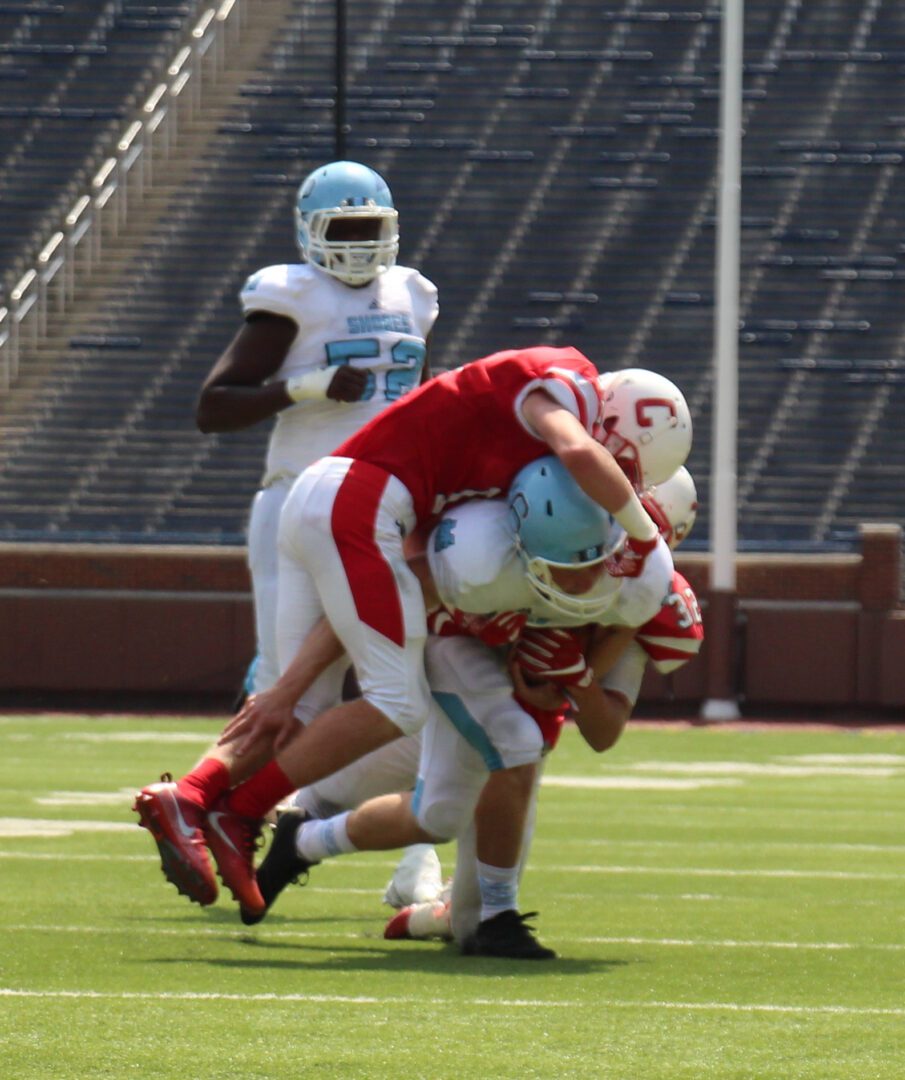 Mona Shores quarterback Tristan Robbins carries two Canton players at the end of a play while standing on one leg. Photo/Jason Goorman

Mona Shores Coach Matt Koziak calls out to his offense as they approach a red-zone play. Photo/Jason Goorman 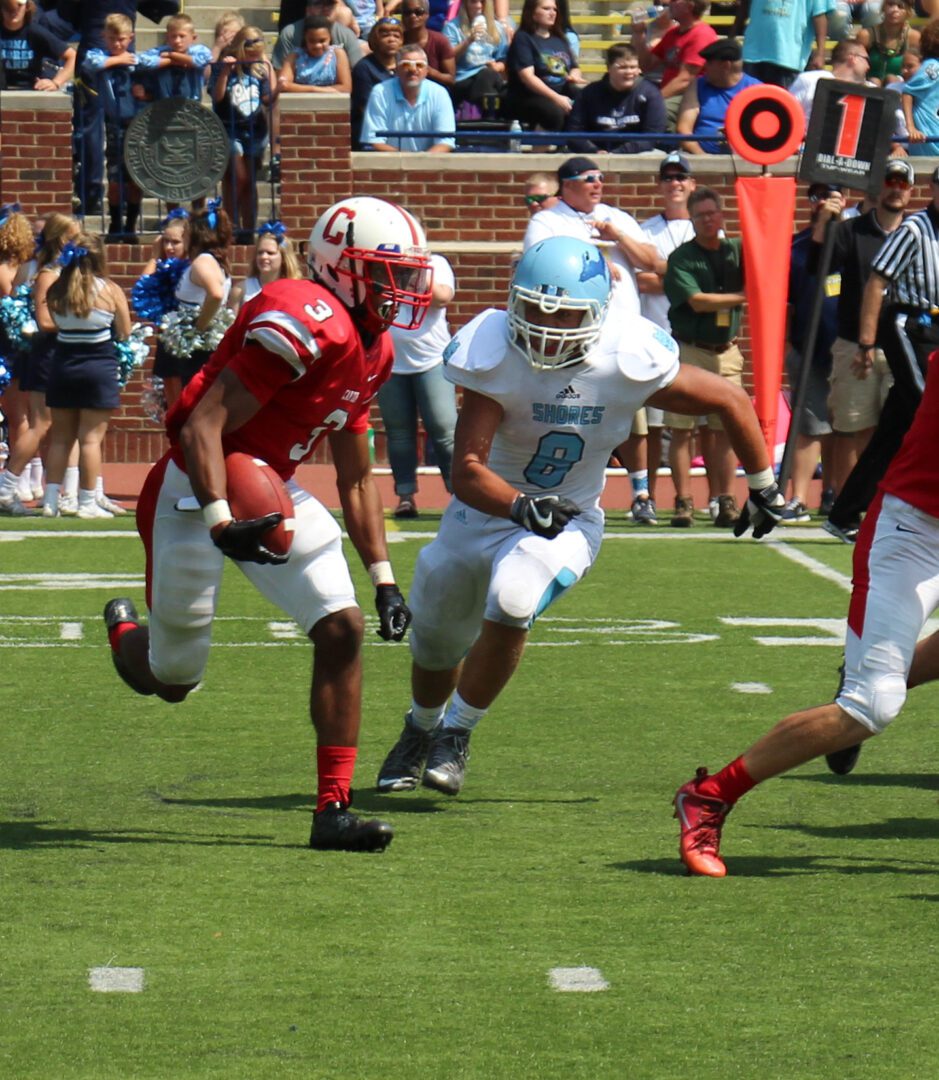 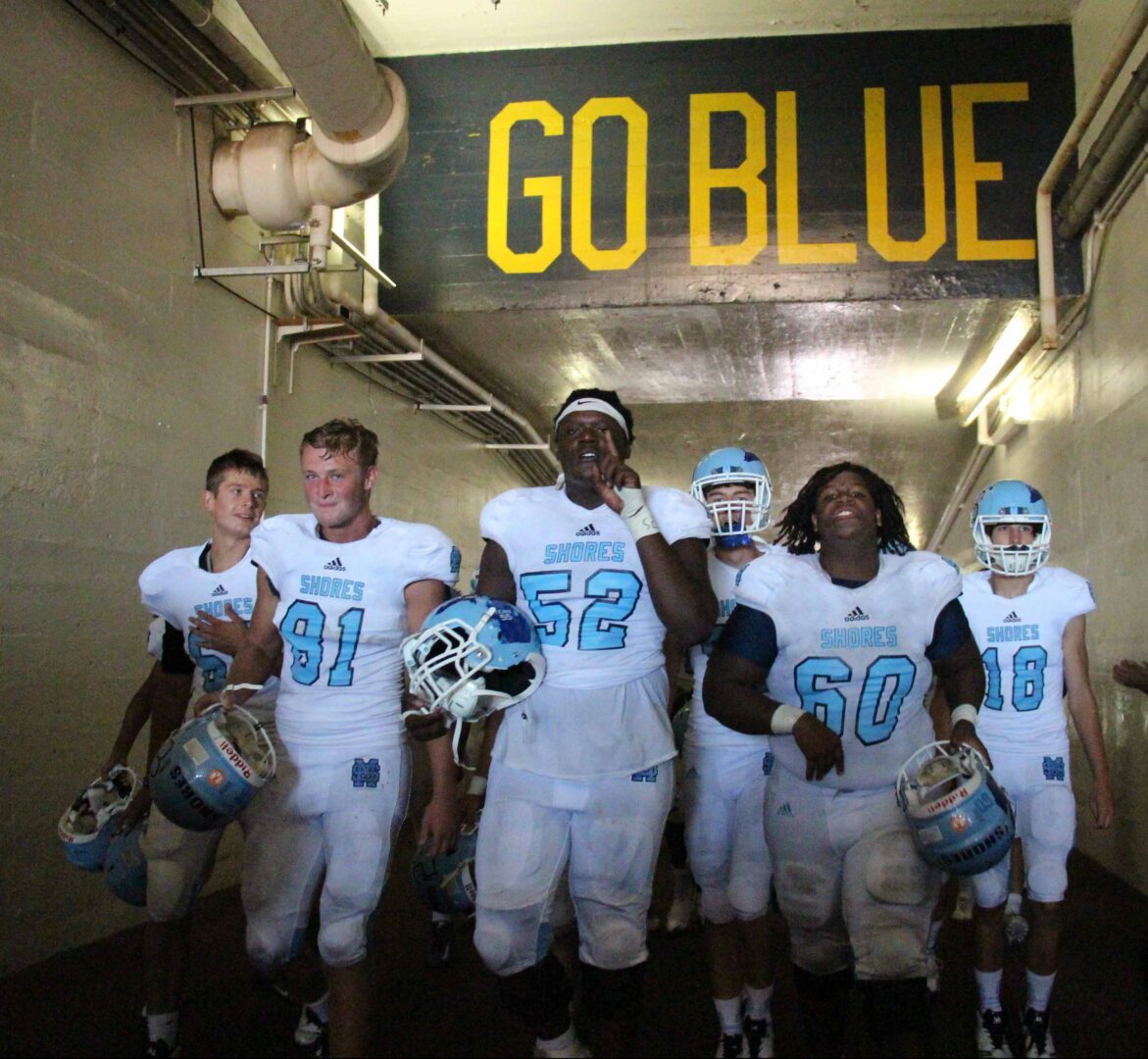 Mona Shores is led up the tunnel after the win by No. 52 Keontae Watson, Seth Koeller (right), No. 60 Chuckie Anthony, No. 81 Jeremy Lee, Carter Peliotes (far left) and No. 18 Isaac Osbo (far right). Photo/Jason Goorman