his counterpart, Muskegon Catholic sophomore Cameron Martinez, in an

effort to prepare the Wildcats defense for the Crusaders’ dangerous dual-threat athlete.

The imitation job must have worked wonders, as Montague’s defense continually frustrated Martinez Friday night – and Archer wasn’t bad being himself, either.

Archer threw for 113 yards and two long touchdowns, and ran for another score, leading Montague to a stunning 34-10 victory over Muskegon Catholic in a battle of unbeaten teams at MCC’s Kehren Stadium.

The win not only clinches the Wildcats’ second perfect regular season in the past three years, but also snaps MCC’s remarkable 26-game winning streak. 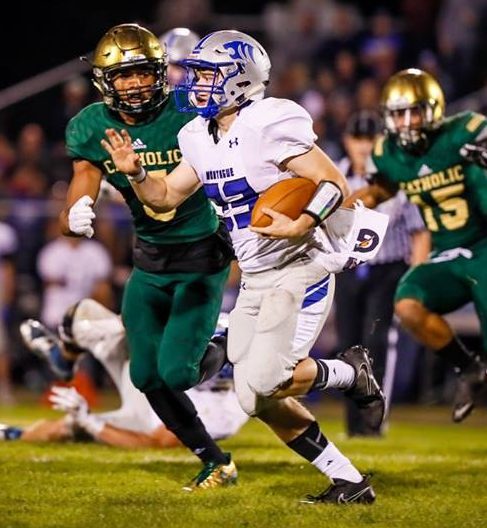 Now Montague will head into the Division 6 playoffs full-steam, with aspirations of winning their first state title since 2009.

“This feels great because it’s a big win for us, especially with the playoffs coming up,” Archer said. “Both teams came out with a lot of motivation. They had the momentum early on, but we settled down and came back like we should and we ended up having a great game.”

Archer was stripped of the ball by MCC defensive end Jacob Martinez deep in Montague territory on the Wildcats’ opening drive, allowing the Crusaders to score on a 6-yard run by Dawson Steigman.

But Montague’s defense stole the show the rest of the way, limiting Martinez to a dismal 7-of-30 passing performance for 102 yards and two interceptions. The usually dominant MCC run game was also limited to just 155 yards on 36 carries.

“Our secondary worked on covering their routes and we knew their game plan coming in,” Archer said. “With Cameron, the key was keeping him contained. We didn’t want him to get outside and have him scramble for big gains.” 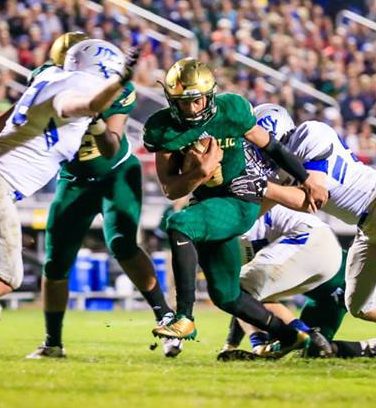 MCC’s Cameron Martinez looks for room up the middle on the run. Photo/Tim Reilly

Martinez kept many plays alive with his feet, often scrambling for 6, 7 or 8 seconds a play while looking for a receiver to break open. But the Wildcats remained stuck on the MCC receivers like glue.

“It was just amazing at how they could lock down those guys for that long,” said Montague coach Pat Collins. “It was kind of comical at times (how long Martinez scrambled). It didn’t look like the game of football at times. But it was very impressive, the job our DBs did.”

Montague rolled back with its big offensive line and its run game. Junior running back Bryce Stark scored on a short touchdown run at 7:19 of the first quarter, and again just a minute into the second quarter to give the Wildcats a 14-7 lead.

Stark finished with 107 yards on 23 carries.

MCC trimmed its deficit to 14-10 on a 33-yard field goal by Caleb Muskovin nearly six minutes later, but Montague stole the momentum back just before halftime.

On a fourth-and-3, a hard count by Archer drew the Crusader defense offside to give Montague a fresh set of downs at the 50-yard-line with under a minute left. Two plays later, Archer found senior Blake Jones wide open over the middle for a 19-yard touchdown, which proved to be a backbreaker for MCC. 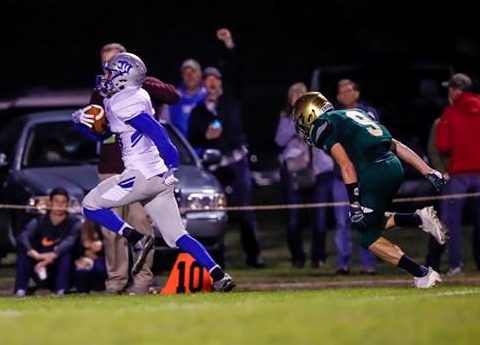 “It was just our two-minute drill,” Archer said. “We worked on that for like 30 minutes at practice on Thursday. I just looked off Cameron Martinez (at safety) and Blake slipped open over the middle.”

The Crusaders’ offense continued to sink in the third quarter. Their four drives ended in two punts, an interception, and a fourth-and-short run that was stopped short by the inspired Wildcats defensive line.

Archer made it 27-10 with 6:24 to play in the third when he appeared to be stopped short of the goal line, but rolled over the top of a Crusader defender and into the end zone for the score.

Two minutes later, he connected with Jones on a perfectly-placed pump-and-go 50-yard touchdown pass to officially put the game out of reach.

Collins said the showdown between two undefeated teams stood as a good measuring stick for the upcoming challenges his squad will face in the playoffs.

“It was two good teams from Muskegon County and we want to represent,” Collins said. “That was the goal tonight, to test each other and we did. We couldn’t have asked for anything better than for Catholic to represent us well and play us in a tough game to get us ready for the next test.”