MUSKEGON – For several years, the Mona Shores girls have been the team to beat in the O-K Black

But this season, thanks in part to former Sailor Alyza Winston, the Muskegon Big Reds are at the top of the conference.

The Big Red already had the league title locked up prior to Friday’s clash with Mona Shores, but they further showed their dominance and completed a perfect 12-0 conference season with a 54-44 win on their home court.

The girls regular season is now over. District tournaments are next week, with every team in a win-or-go-home situation.

“It’s really exciting being undefeated (in the O-K Black),” Winston said. “But we’ve got to work hard to get where we want to get, which is of course a state championship.”

The Big Reds have now won 17 straight games and are 18-2 on the year. The Sailors finished the regular season 9-11 and 7-5 in conference play. 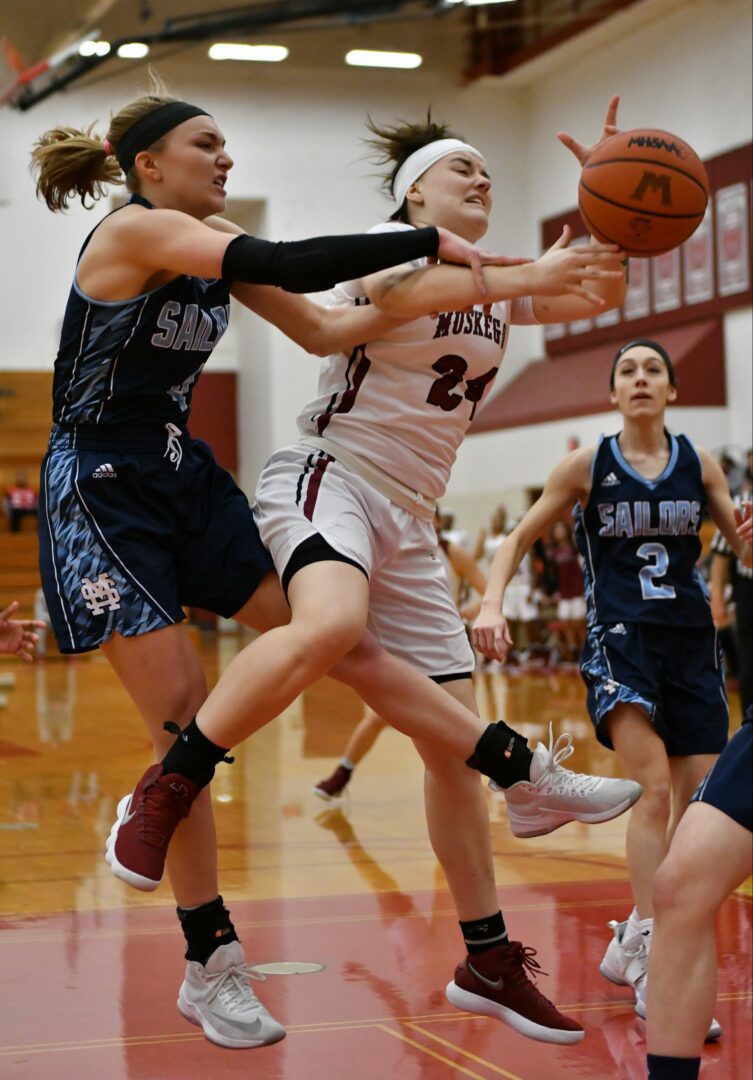 Just after the Sailors took that lead, however, Winston checked into the game for the first time. She hit a three on the next possession and gave Muskegon its first lead of the game.

“She’s been consistent for us all year,” Muskegon Coach Rodney Walker said about Winston, who didn’t start because she’s a junior, and it was Senior Night. “When she came into the game she did exactly what she usually does. She does a great job for us giving us that extra push.”

Muskegon went on an 8-2 run after the starters subbed in and led 14-11 after one quarter. The Big Reds extended their lead to 24-19 at halftime.

Mona Shores didn’t make a field goal attempt in the second quarter, but stayed in the game at the free-throw line. The Sailors were 8-for-14 in the quarter, led by Nia Miskel’s six free throws.

“What we were trying to do was make sure the kids knew exactly how the referees were calling it, because they were calling it kind of close,” Walker said. “At the end of the day we’ve got to make sure we are playing defense appropriately.”

The Sailors came out of halftime aggressively and took a 25-24 lead on a Megan DeLong three-pointer. But Muskegon answered with a 12-4 run to retake the lead and never looked back.

The Big Reds led 45-34 after three quarters, and by as many as 15 points in the fourth.

“I thought in the second half we did a great job defensively adjusting to some things in regard to Nia Miskel,” Walker said. “She scored maybe twice in the third quarter, which was huge because she was going off in the first half.”

Miskel scored 10 points in the first half, but just three in the third quarter. 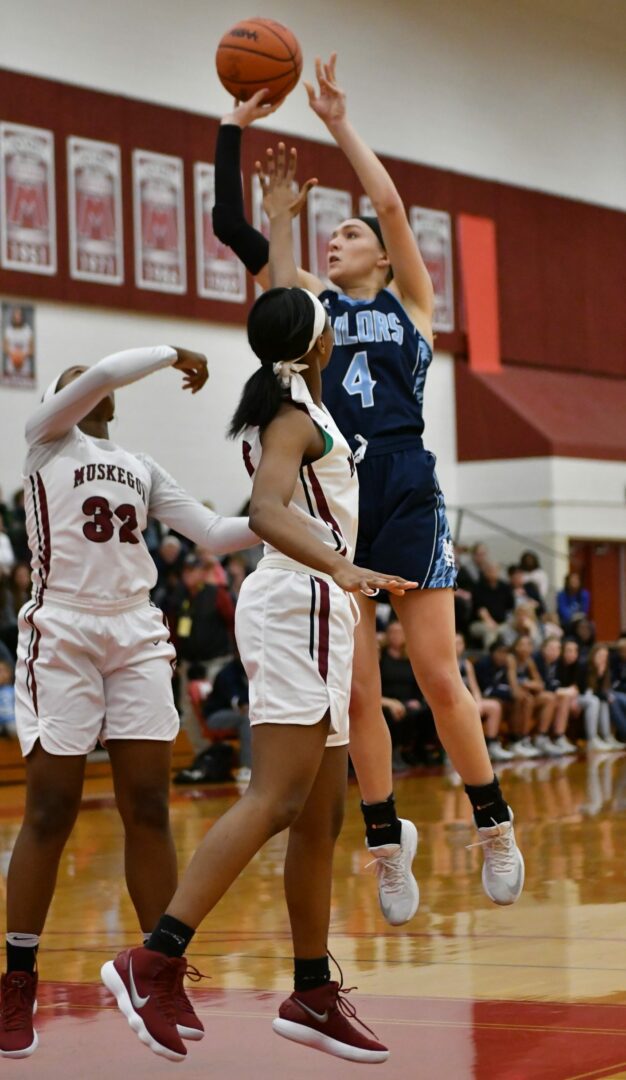 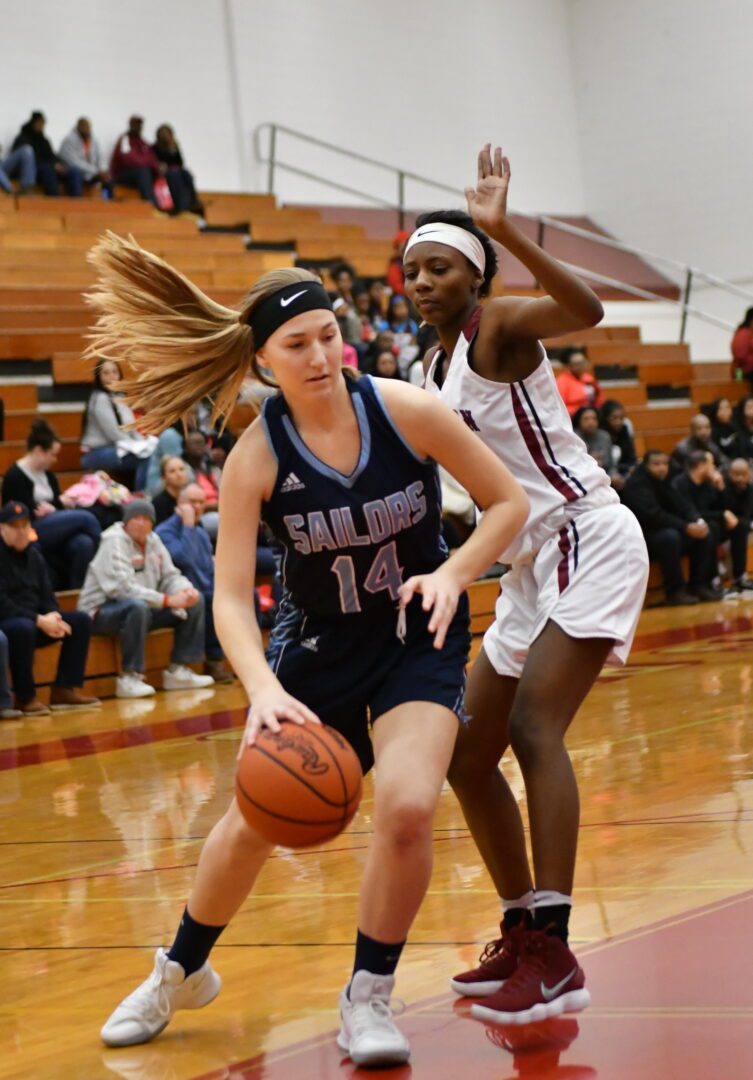 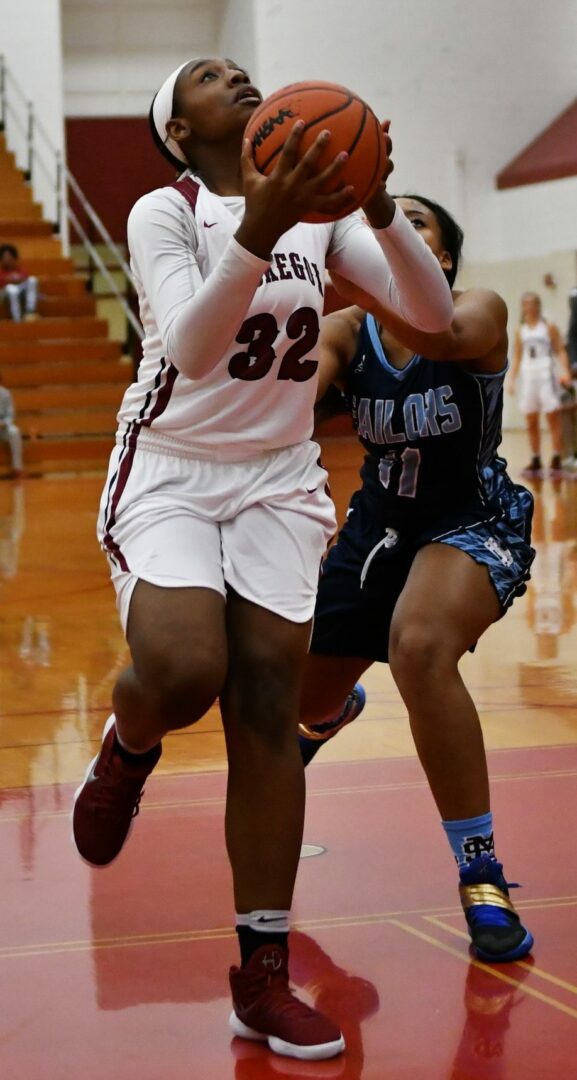 Diynasti Dowell goes up for the shot against Mona Shores’ No. 11 Jordan Pearson. Photo/Michael Banka

Goorman’s Gridiron Picks: Football on Thursday and Friday, two weeks in a row, and there are great games this weekend