Those numbers represent the Sailors’ core players – Davarius Carter (No.3), Jarvis Walker (No. 4) and James Gilbert (No. 5).

“It’s a great win for us,” Burse said. “When we initially came out I wanted the guys to show more energy. Tonight they shared the ball and were happy for one another.

“Night in and night out it’s a struggle for us. We needed this win, bad. It showed the guys we could share the ball and have fun and bring some energy.” 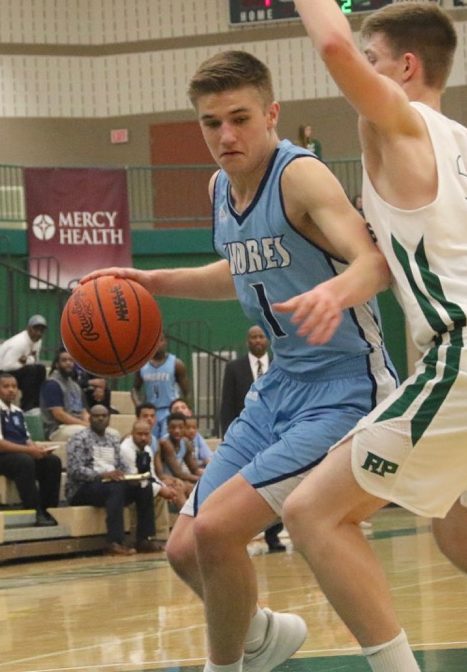 Ben Rosenthal drives to the hoop from the post for Mona Shores. Photo/Joe Lane

Walker led all scorers with 26 points, including 21 in the second half.

“It was definitely a team effort,” Walker said. “I think from last year to this year we’ve improved a lot. Plus we’re young. There’s a lot more to come.”

Despite not making a shot from the field until the second quarter, the Rockets were able to keep in close early. Mona Shores led just 8-3 after one quarter, with all three R-P points coming at the foul line.

The teams traded baskets for most of the second quarter, with the Rockets grabbing a brief 15-14 lead with 2:43 left in the half.

Carter then caught fire for the Sailors. The junior guard rattled off three consecutive three-pointers and a driving lay-up for a personal 11-0 run.

Mona Shores added two more points before the half, making it 27-15 at the break.

“We knew they were going to key on Jarvis Walker, so Davarius Carter had a different plan for them,” Burse said. “We fed him (the ball) and the energy started there, with him making a few threes.”

After a quiet first half, Walker began to take over in the third quarter, scoring 12 points. The Sailors outscored the Rockets 24-17 and had a 51-32 lead headed into the fourth quarter.

“The third quarter for us has been terrible,” Burse said. “We wanted to come out and change that tonight. We came out on fire and I was very pleased.”

Walker added nine more points in the fourth, going 5-for-6 at the free throw line.

“Just be aggressive,” the standout sophomore said of his second-half mentality. “If I get doubled, just find my teammates and spread the ball around.”

Carter and Gilbert each scored 14 points for Mona Shores. 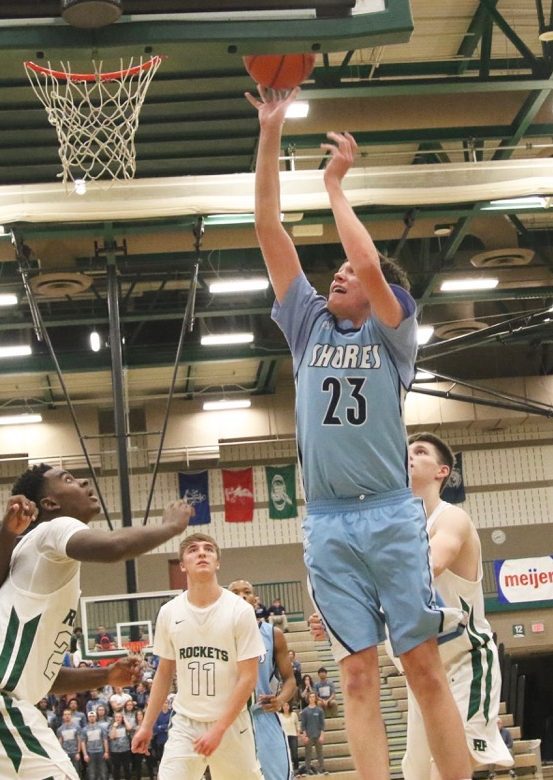 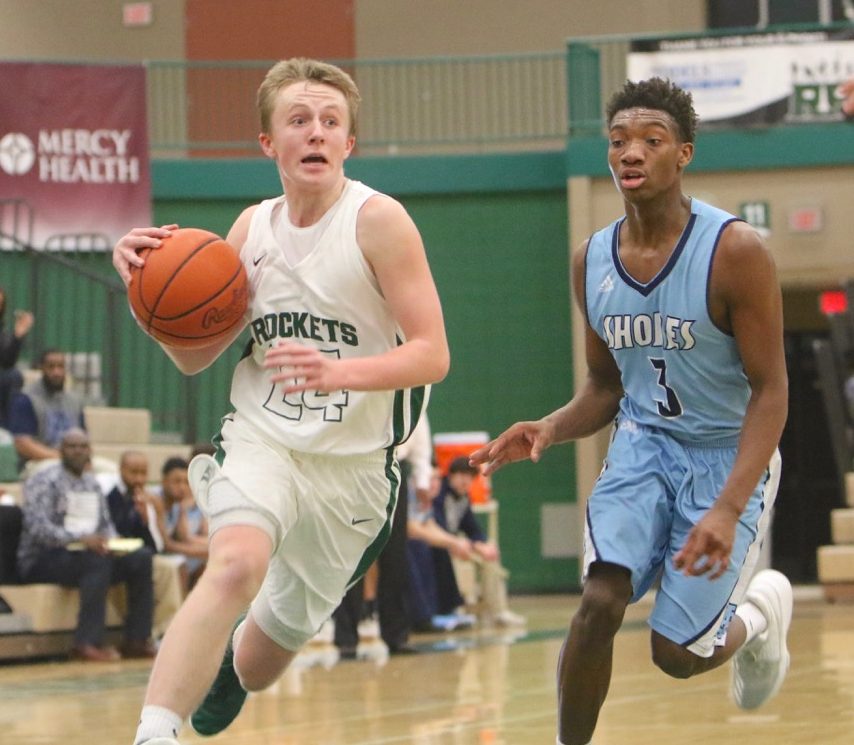 Reeths-Puffer’s No. 24 Kaleb Mitchelson gets past Davarius Carter. Photo/Joe Lane 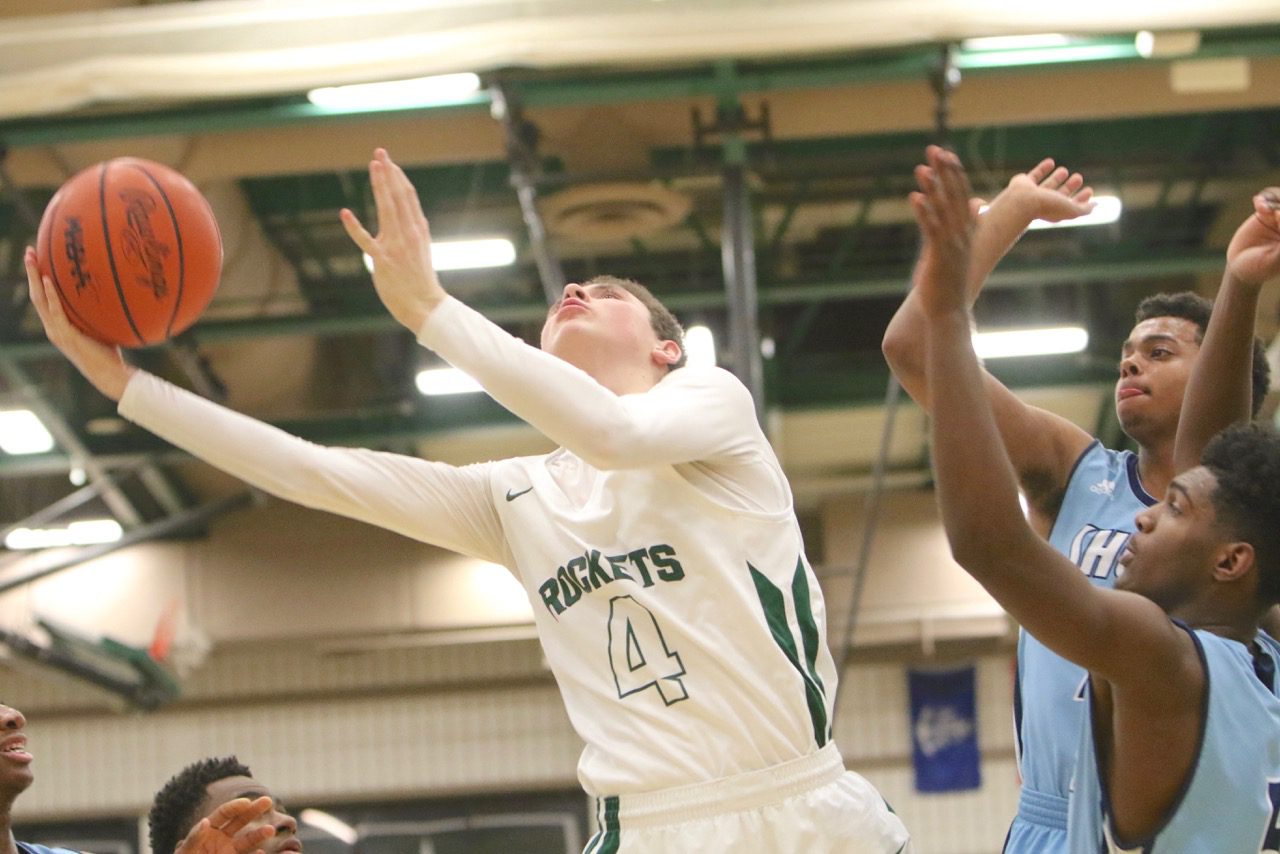 Carter Fulton gets the scoop under the basket for Reeths-Puffer. Photo/Joe Lane 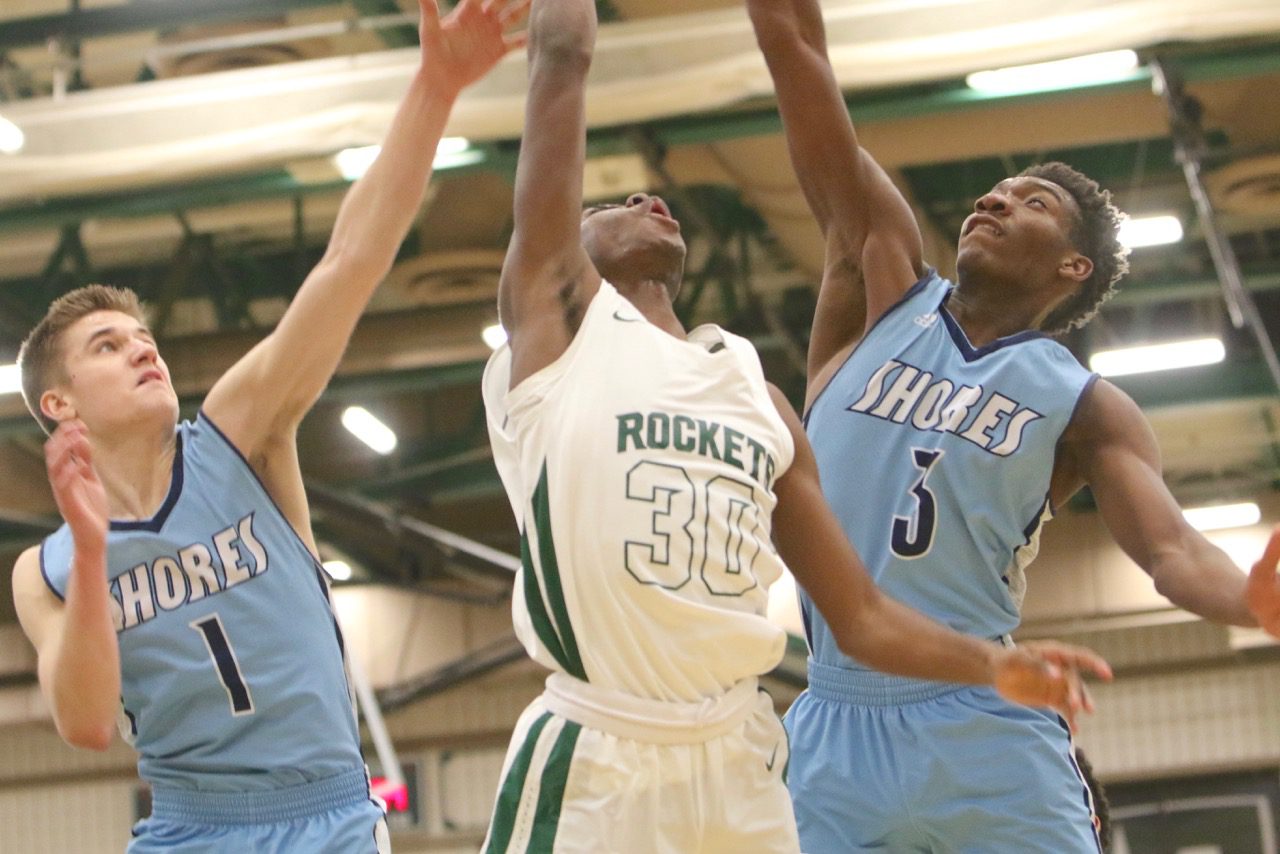 Emcee Williams gets in for the Reeths-Puffer layup past Mona Shores’ No. 1 Ben Rosenthal and No. 3 Davarius Carter. Photo/Joe Lane 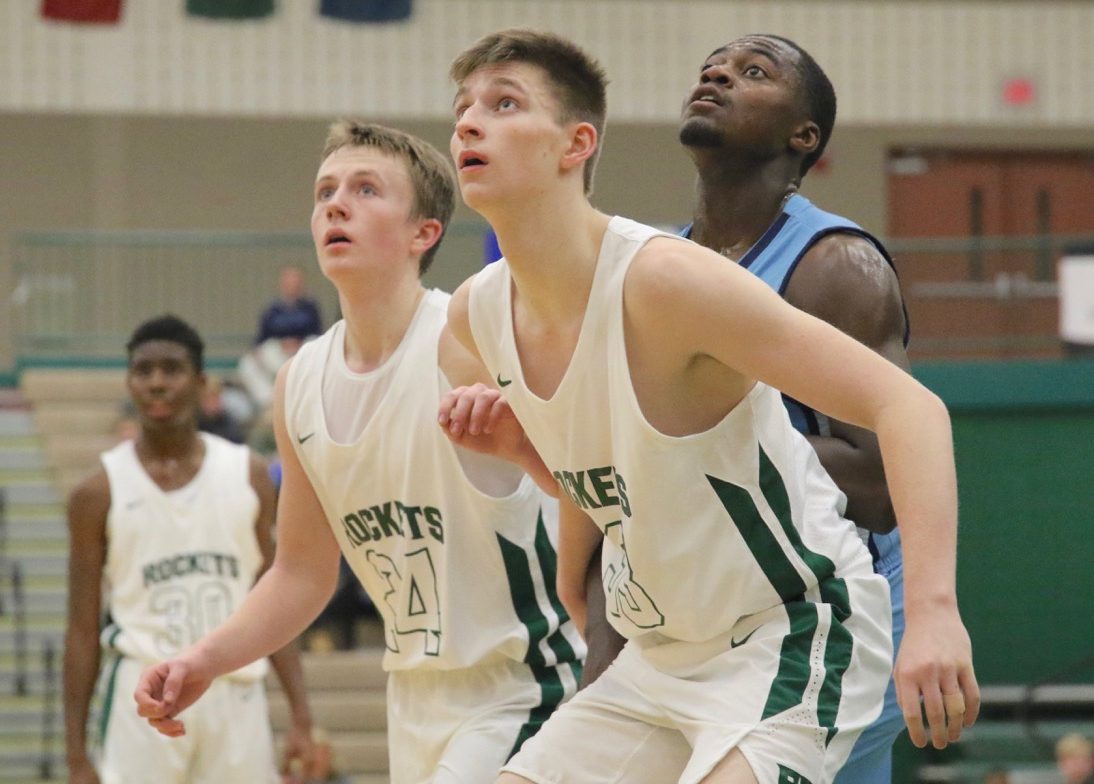 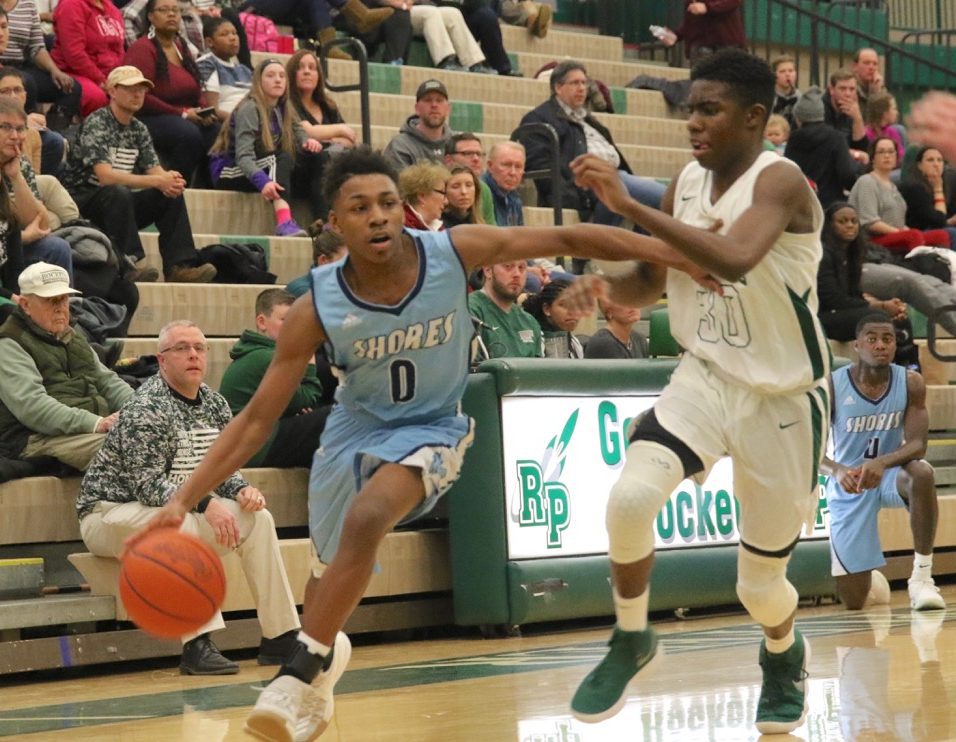 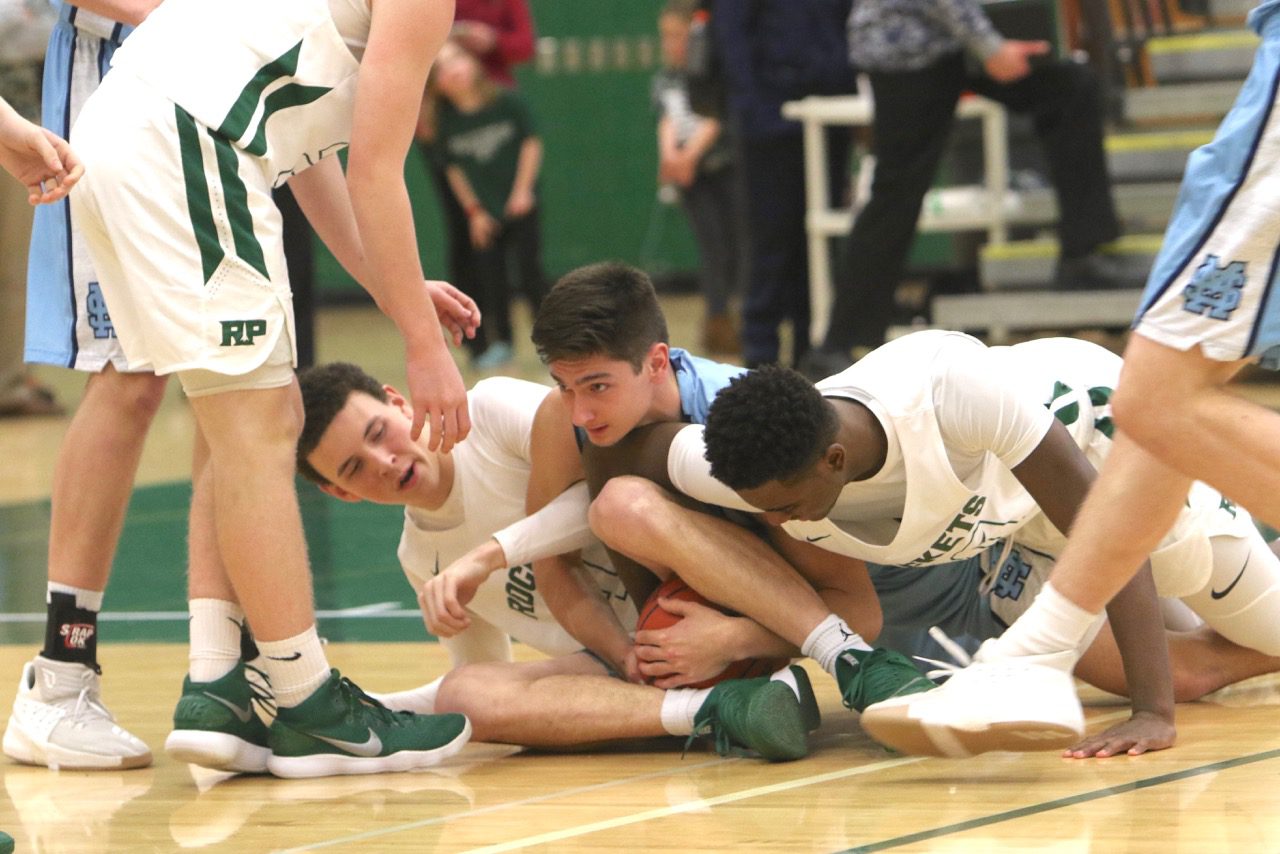 Kolbe Trovinger wedges himself in to tie up the Rockets. Photo/Joe Lane

R-P wrestling team edges Whitehall in a classic, goes on to win another district title