Lumberjacks get lots of shots, and just enough goals, to beat Central Illinois 2-1

The Muskegon Lumberjacks didn’t have much of a break following their busy weekend, but they sure didn’t

seem to have tired legs on Wednesday.

Muskegon celebrated Valentine’s Day by unleashing 47 shots on goal and earning a 2-1 victory over Central Illinois in front of 1,219 fans at the L.C. Walker Arena.

The win moves the Jacks into third place in the USHL’s Eastern Conference with a 21-17-2 record. They have 44 points in the standings, just five behind first-place Team USA.

After unleashing 85 shots in their two games on Friday and Saturday, the Lumberjacks kept up the attack against the Flying Aces.

Muskegon outshot the visitors 19-9 in the opening period, and took a 1-0 lead when defenseman Colby Bukes picked up a loose puck at the blue line, skated to the top of the face off circle and flicked a shot that handcuffed goalie Ryan Snowden and bounced off his blocker for a 1-0 lead.

It was Bukes’ third goal of the season. 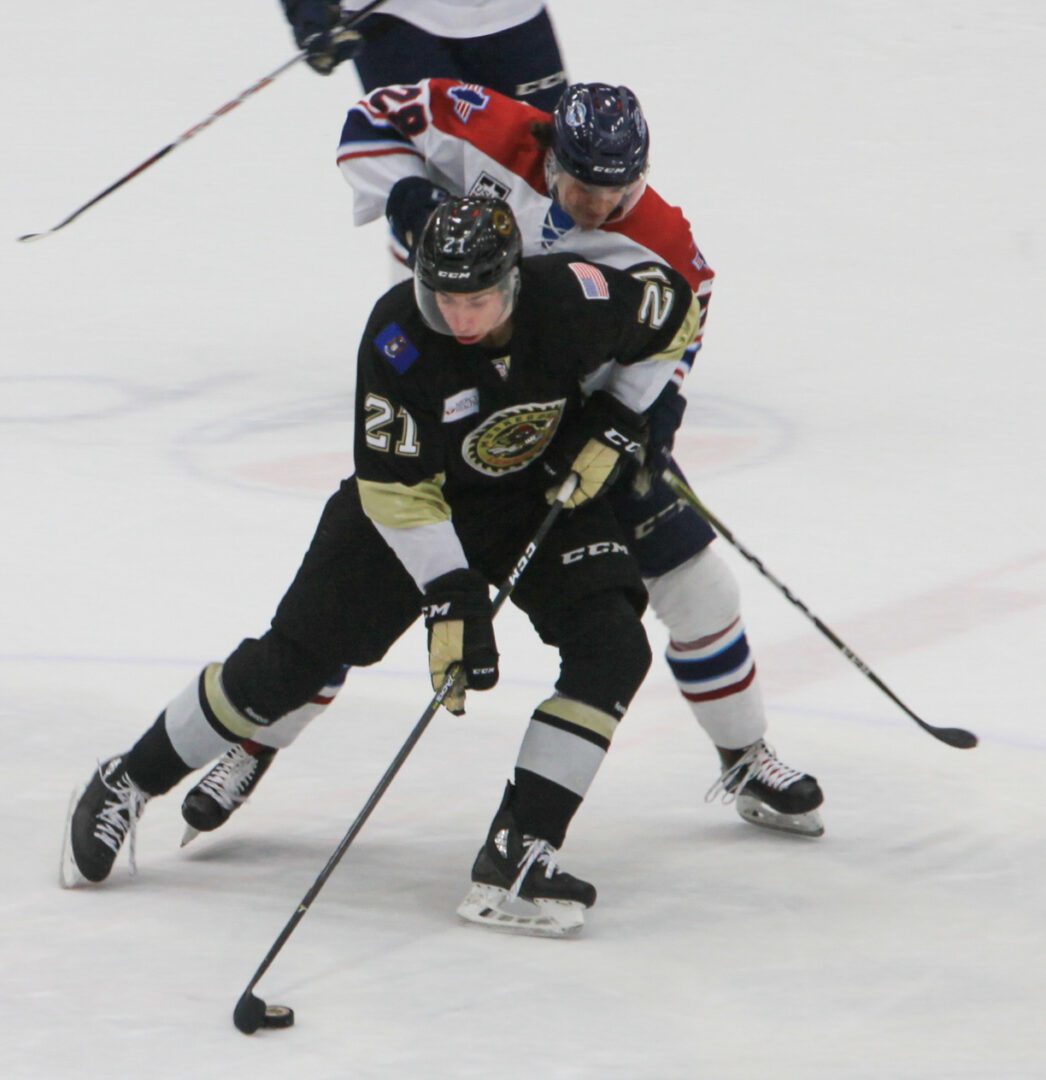 “I’m proud of our guys, they were ready to play,” said Muskegon coach John LaFontaine . “We played a good first period. (Central Illinois) is explosive, and I thought our team defense played the way we want to play.”

The Flying Aces were a bit more aggressive in the second period, generating 10 shots while the Lumberjacks had 13. But neither team was able to score.

Muskegon increased the lead to 2-0 just 2:05 into the third period when Bobby Kaiser and Jagger Joshua’s give-and-go play at the blue line resulted in Kaiser netting his fifth goal of the season.

The Lumberjacks had an opportunity to score again four minutes later when Anthony Del Gaizo found himself alone in front of the net, only to have Snowden deny his point-blank shot.

The Flying Aces finally found the net with 11:27 left in the third when Jamie Armstrong knocked a rebound past Jacks goalie Keegan Karki, cutting the lead to 2-1.

With seven minutes left in the game, Snowden once again denied Muskegon a goal, sliding across the crease to deny Jachym Kondelik’s open look.

But as good as the Central Illinois goalie was, Karki and his defense were better. The Flying Aces tried to pull Snowden for an extra attacker in the final two minutes, but had to leave him in because they couldn’t get the puck into the Jacks’ zone.

“I think we anticipated them very well,” said Karki, who finished with 27 saves. “We knew their strengths were their speed and how they handled the puck, and we practiced and worked on that.” 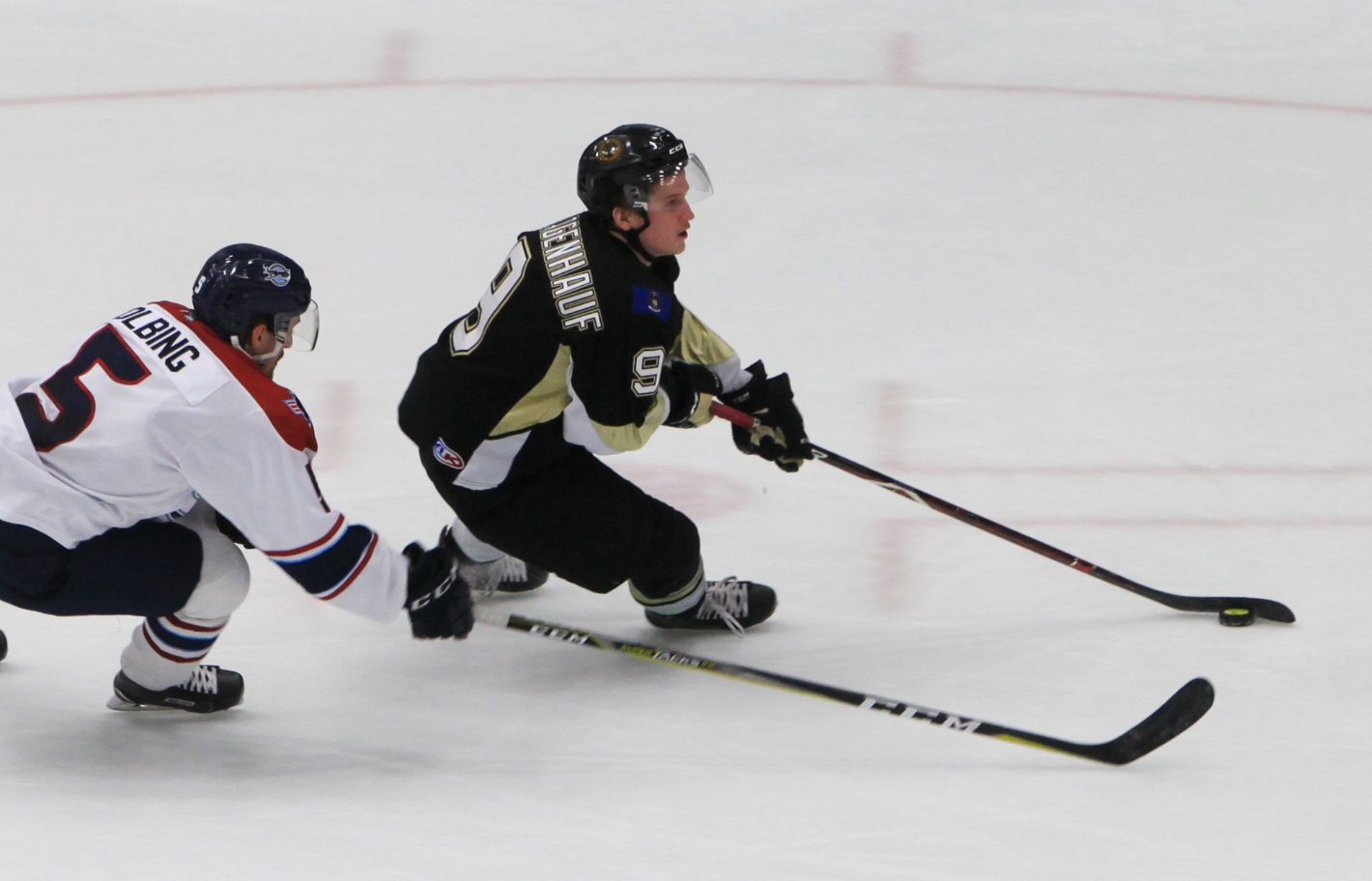 Will Schlagenhauf attempts to rush the net with Central Illinois defender Jacob Olbing on his heels. Photo/Jason Goorman 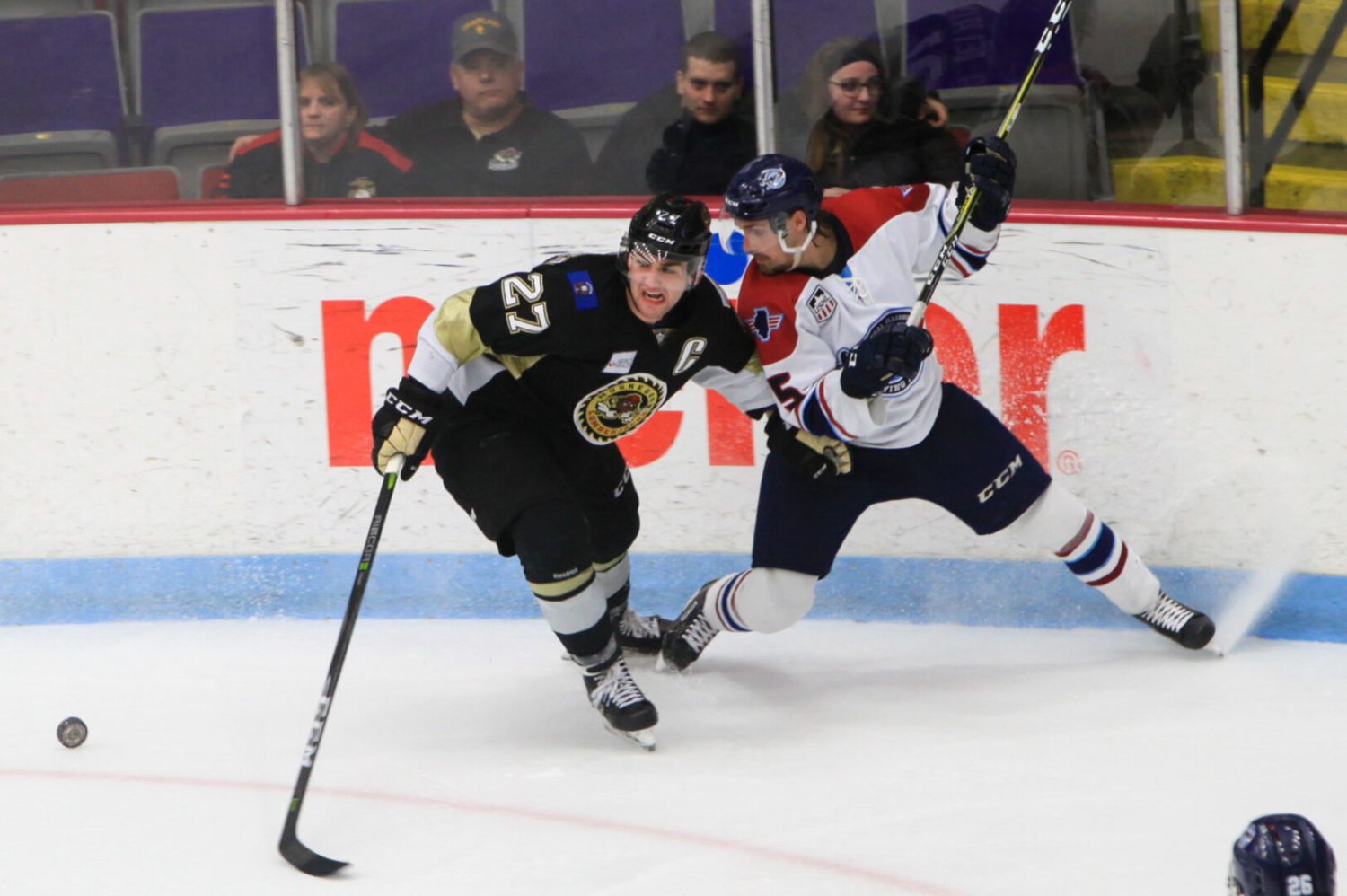 Muskegon Captain Anthony Del Gaizo hits the breaks to get back to the puck while Jacob Olbing does the same. Photo/Jason Goorman 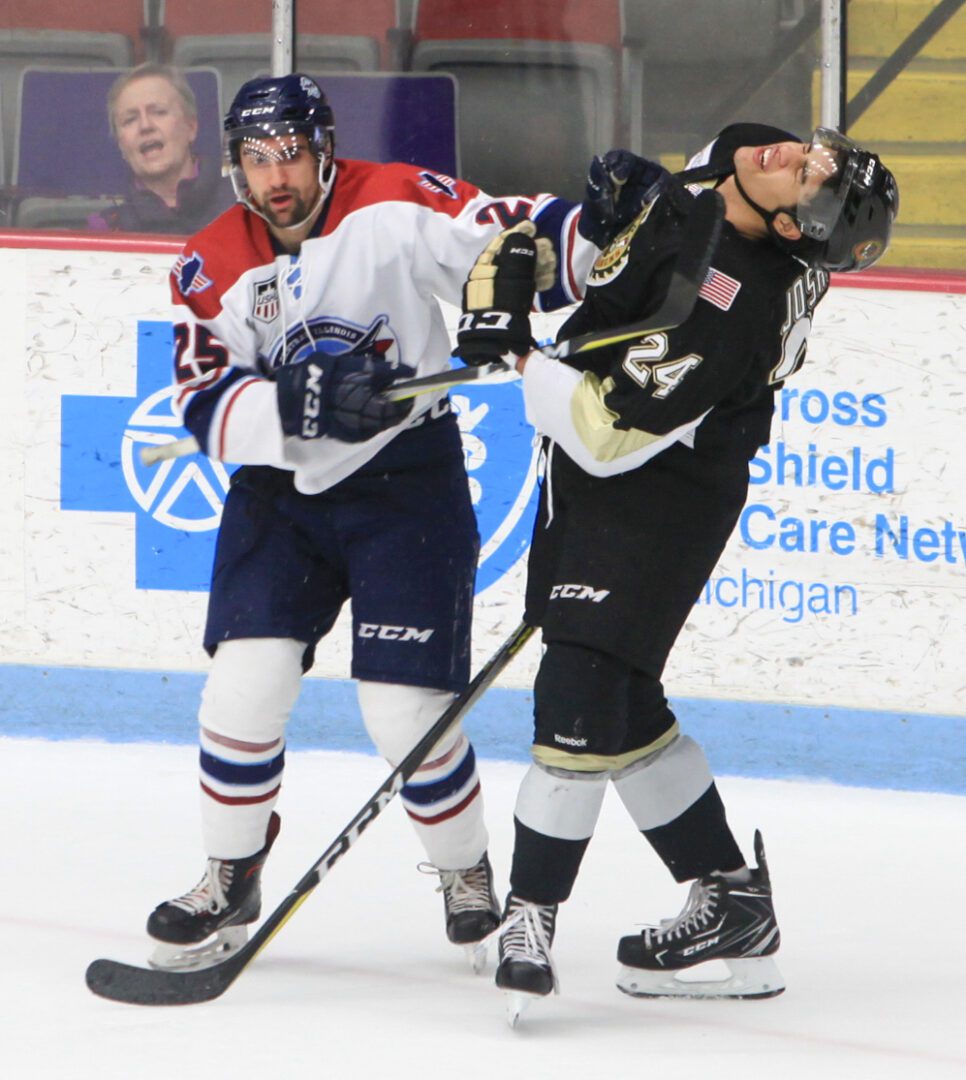 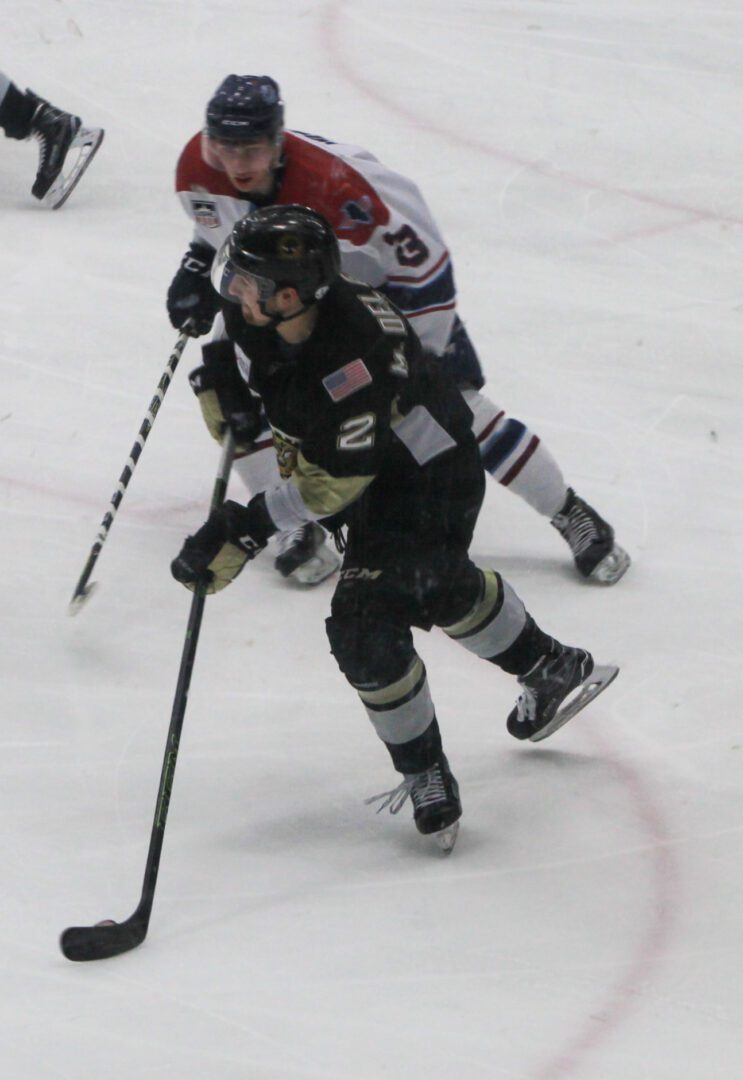 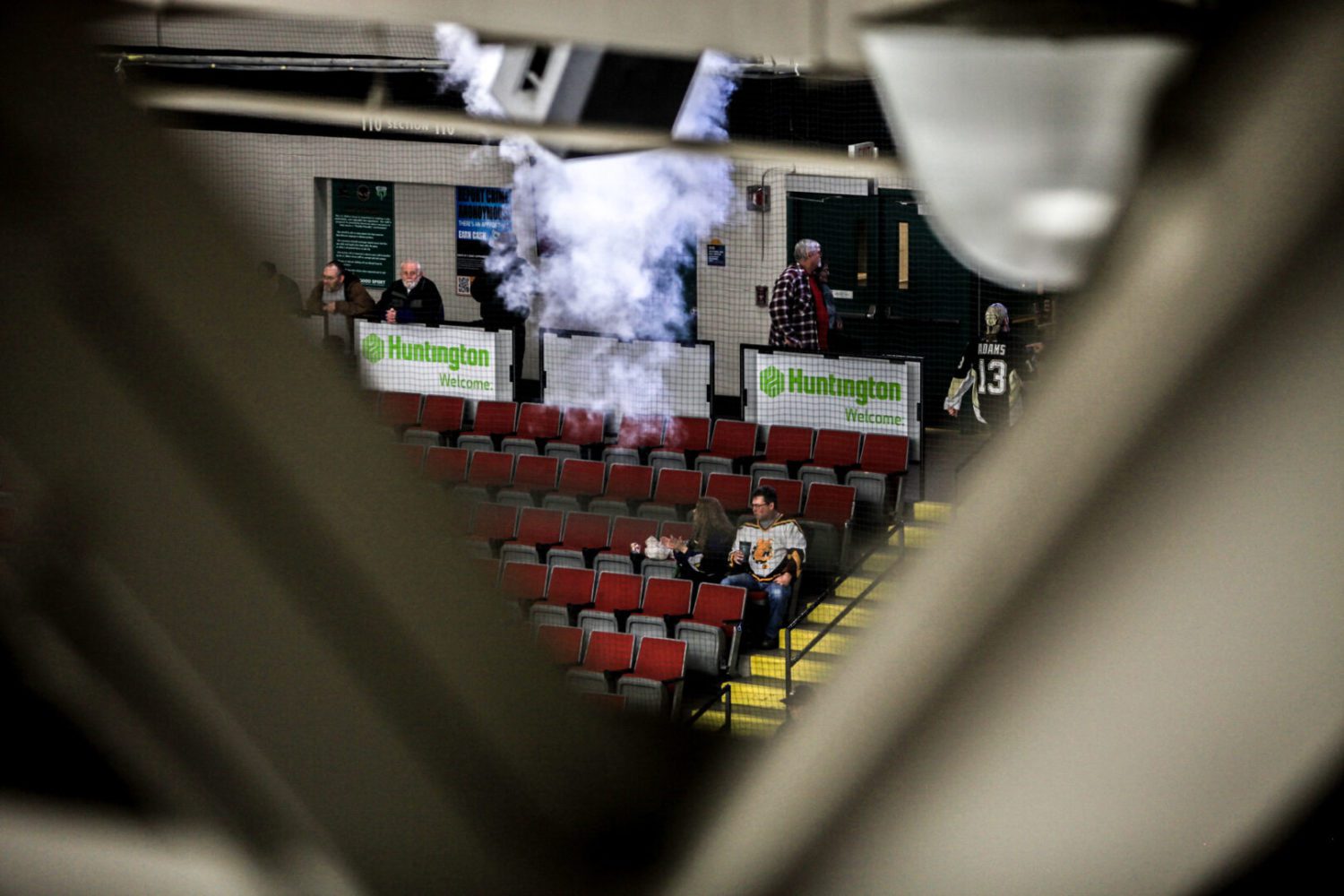 Ghosts of the rafters make a showing at the L.C. Walker Arena. Photo/Jason Goorman 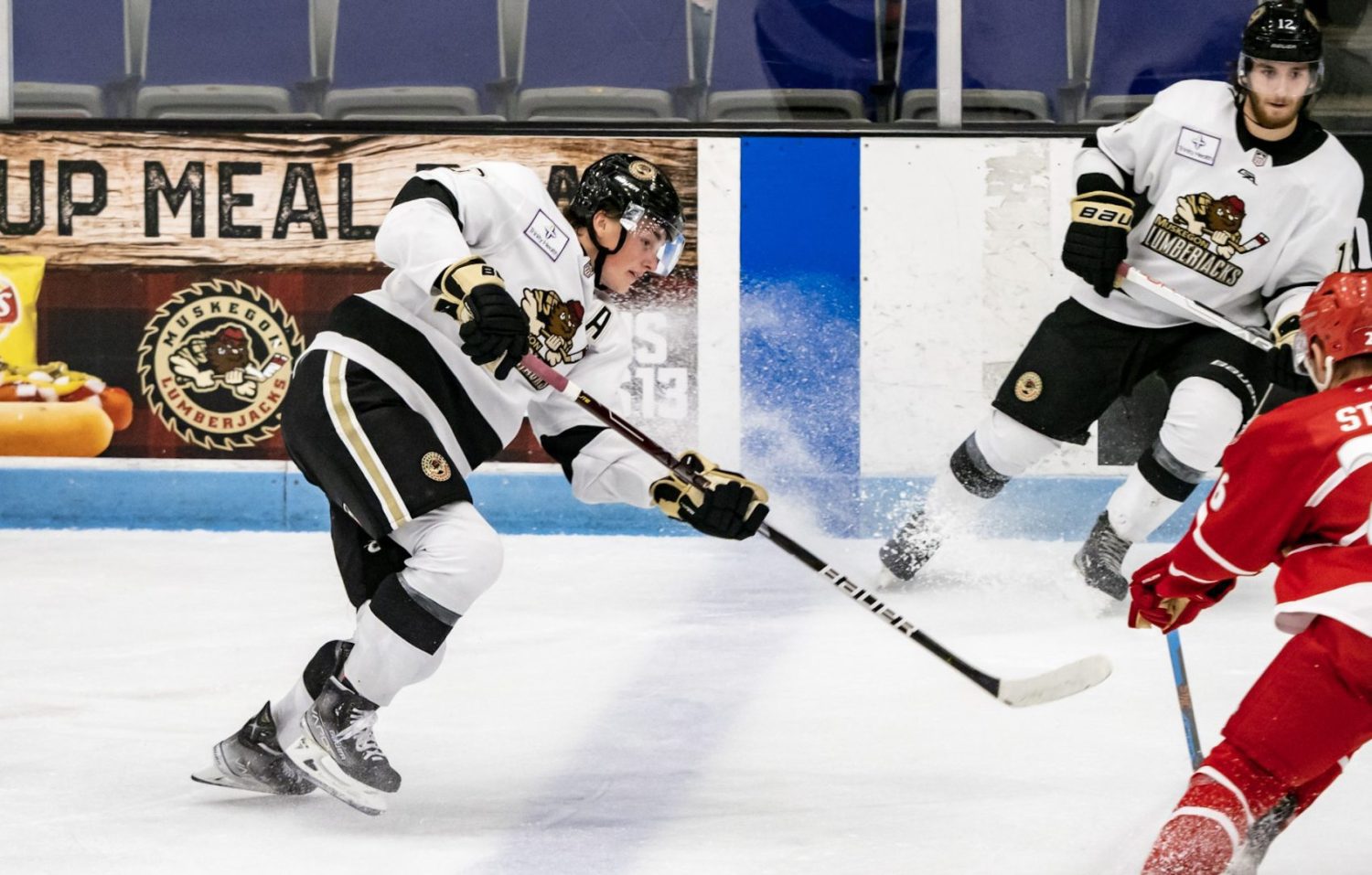