FRUITPORT TOWNSHIP – Basketball is often a game of seconds, and that was the case for the Fruitport Calvary

girls, who snuck past Muskegon Heights 44-42 in a Class D district championship game

on their home court on Friday.

With 12 seconds remaining and the Eagles holding a 42-40 lead, Muskegon Heights’ Jakayla Anderson forced a turnover at midcourt, then scooped the ball up and took it to the rim for a layup to tie the score at 42.

Instead of calling time out, Fruitport Calvary head coach Brad Richards decided to let his team play out the final seconds.

It turned out to be the right call. 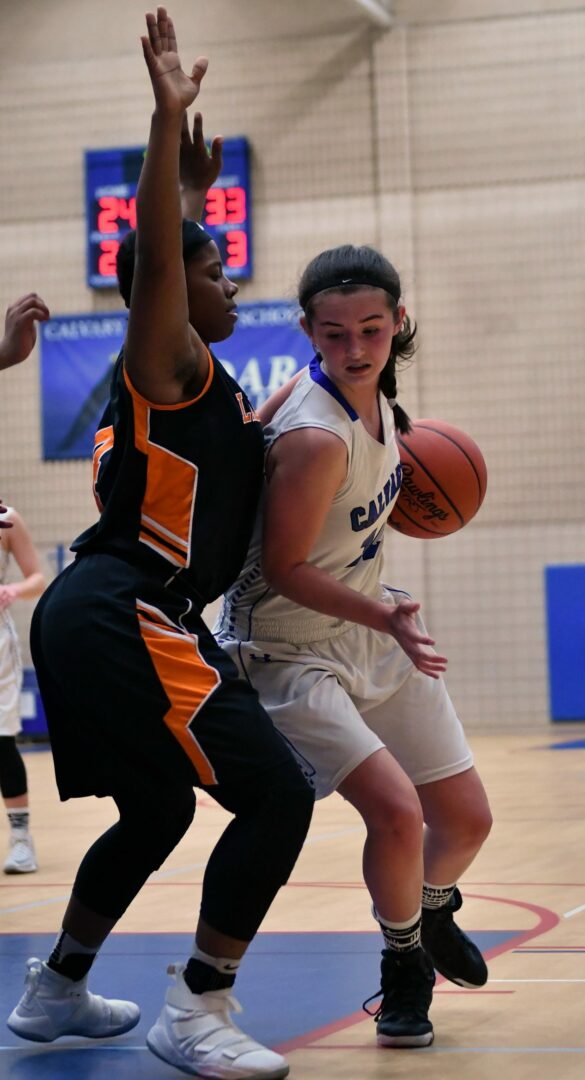 With eight seconds remaining, Calvary sophomore Kelsey Richards took the inbound pass and drove past multiple Tiger defenders, before crossing half court and throwing a pass to teammate Lizzie Cammenga near the basket.

Cammenga laid the ball in off the backboard as time expired to give Fruitport Calvary the thrilling victory and its fifth straight district title.

“It was insane,” said Cammenga about her game-winner. “I just ran down to the block and saw Kelsey coming down, and I was open. She made an outstanding pass and I put it in. I didn’t even have time to think or react. I just shot it and it went in.”

Coach Richards said he made the decision to play on, instead of calling time out to set up a play, because he didn’t want to give the Tiger defenders a chance to get ready.

“There are two schools of thought,” he said. “You call time out, it gives them a chance to set up. We had the ball and we were attacking. They didn’t have time to set up a press or anything.”

It was a game of perseverance for the Eagles, who overcame a 36-31 deficit after three quarters.

Calvary outscored Muskegon Heights 13-6 in the final eight minutes, with Kelsey Richards collecting 10 of her game-high 30 points in the last quarter.

“I’m just so proud of us,” said Richards about her team fighting back in the final quarter. “We pushed through the pain and we won. It was amazing.”

The two teams started off even with the Tigers holding a 9-8 lead after one quarter.

In the second quarter, Jakayla Anderson found her shooting stroke, scoring 11 of her 20 points to help give Muskegon Heights a 27-20 halftime lead. 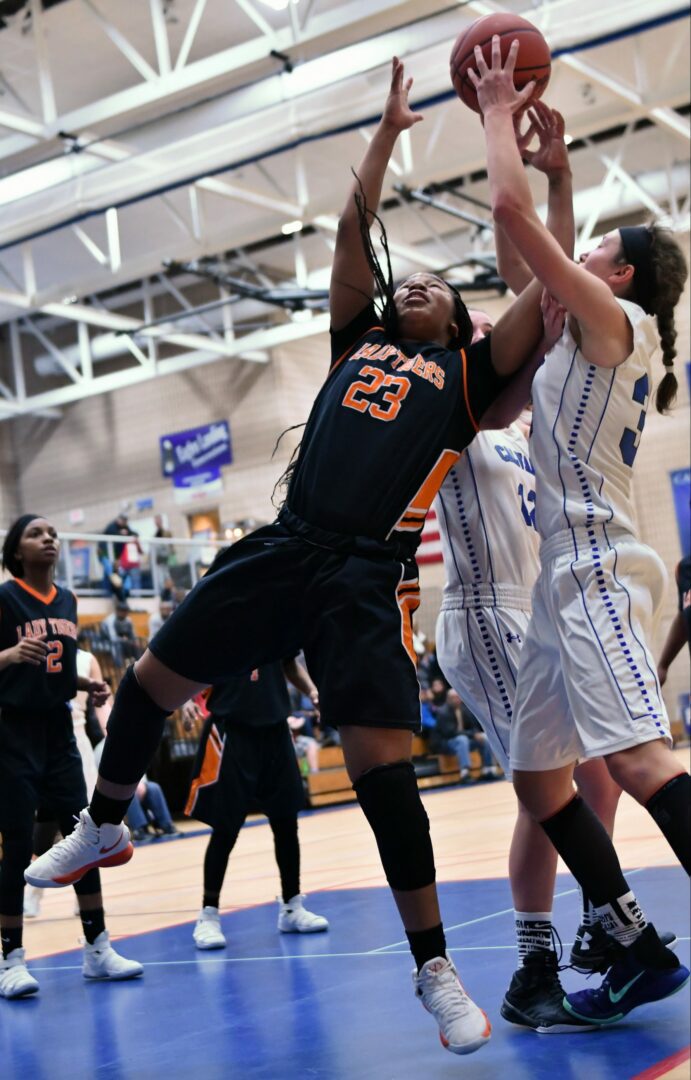 In the third quarter, Muskegon Heights looked for the knockout punch, but Fruitport Calvary kept it close.

In the fourth quarter, Muskegon Heights held a lead until Kelsey Richards scored with 3:07 left to give Calvary a 37-36 edge.

Calvary expanded that lead to 42-38 with 29 seconds left, before Jakayla Anderson hit a bucket with 22 seconds left to make the score 42-40.

After a Tiger timeout, Calvary turned the ball over, leading to the Anderson layup which tied the score at 42.

That led to Cammenga’s game-winning layup.

Jakayla Anderson paced the Tigers with 20 points and Rahjanique Anderson followed with 15.

Fruitport Calvary was led by Kelsey Richards with 30 points and Brionna Johnson with seven points and 20 rebounds.

Muskegon Heights finished the season with a 6-15 record while Fruitport Calvary improved to 19-3.

“When you look at the banners, the expectation is kind of there in the background,” Coach Richards said. “To have three juniors and no seniors, to do what this team did, they’re always going to have a special place in my heart.”

Fruitport Calvary will travel to Big Rapids Crossroads Academy to play Bear Lake in the regional semifinals on Tuesday at 7:30 p.m. 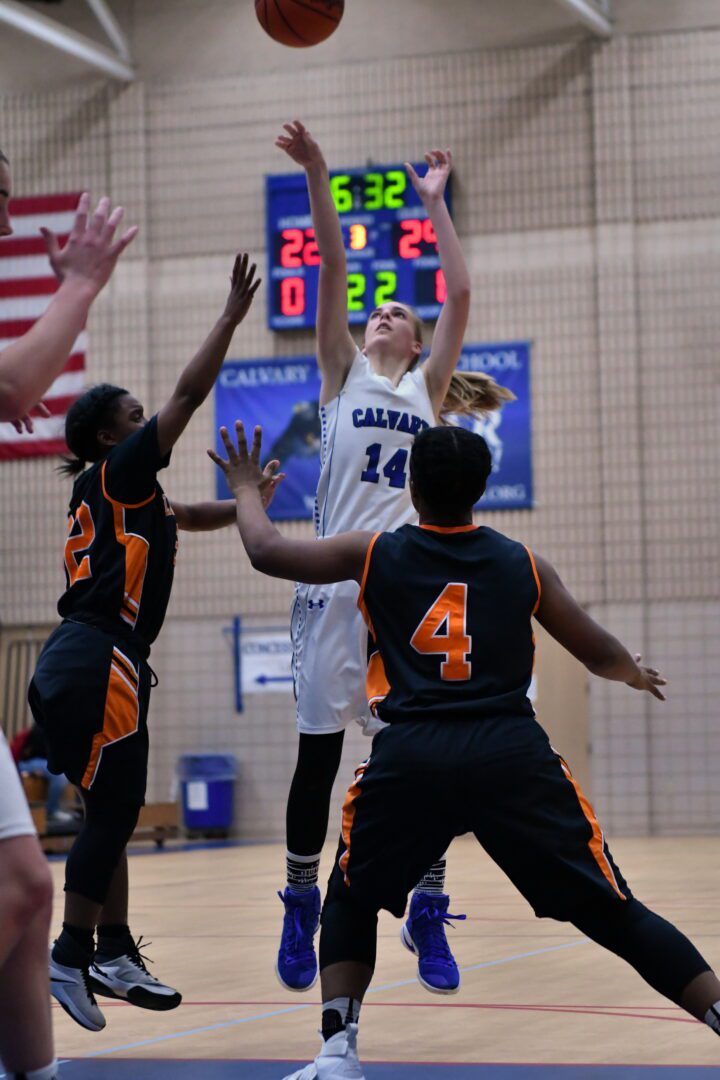 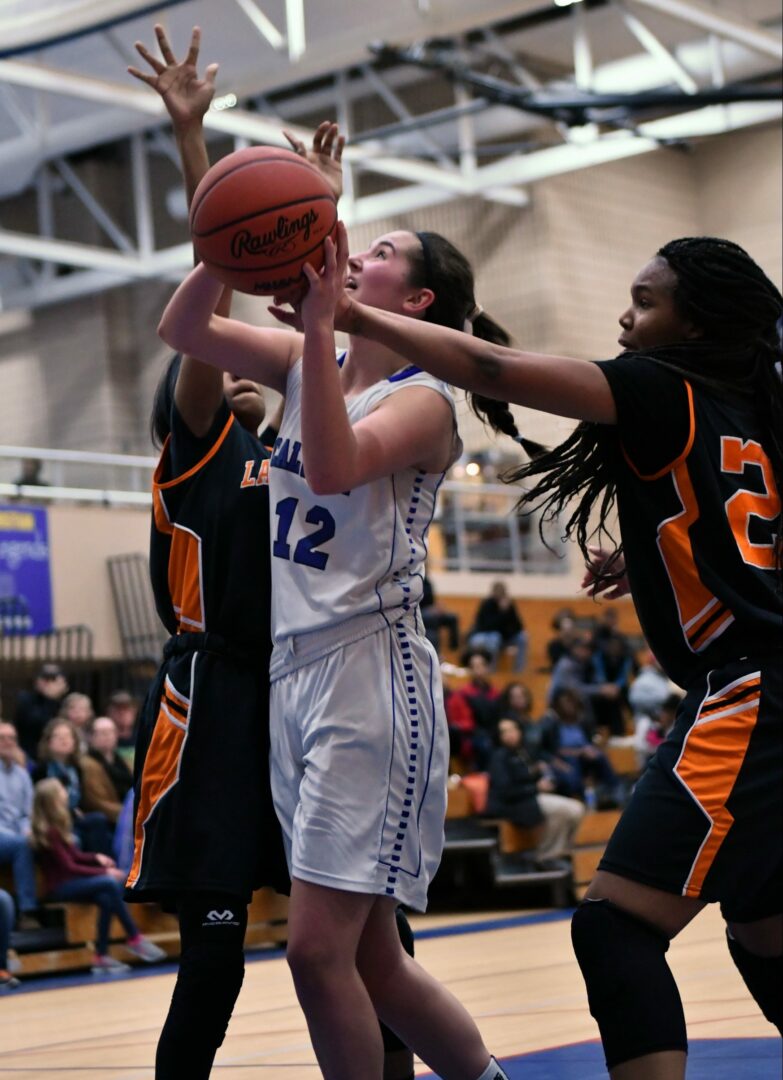 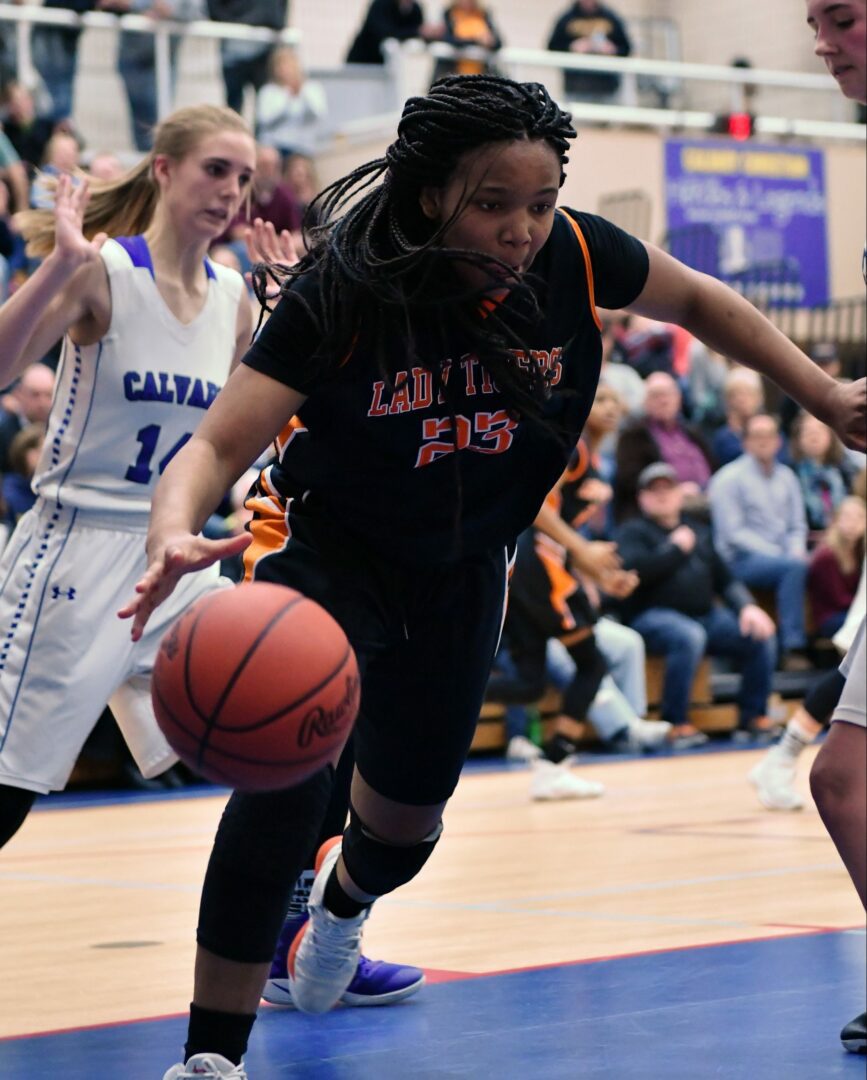 Jakayla Anderson drives to the hoop for the Tigers. Photo/Michael Banka 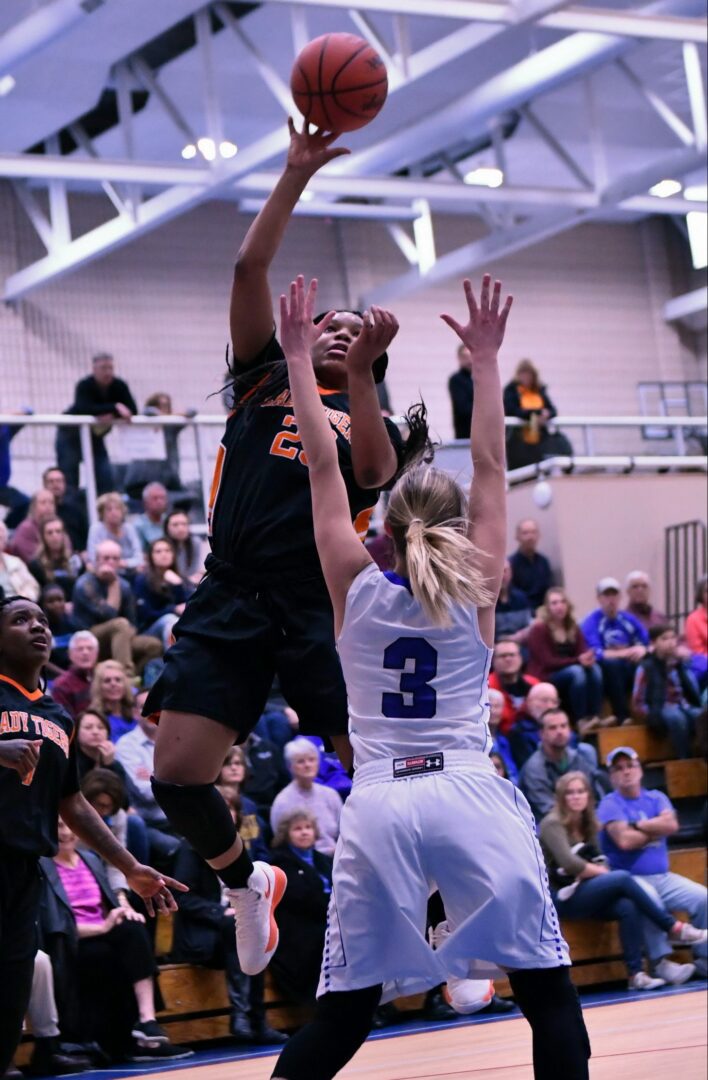 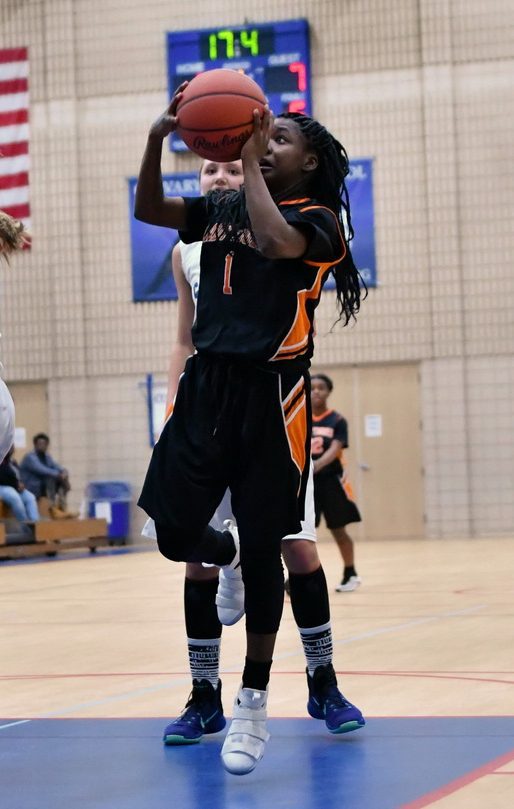 Muskegon Heights guard Rahjanique Anderson goes up for the shot in the lan. Photo/Michael Banka 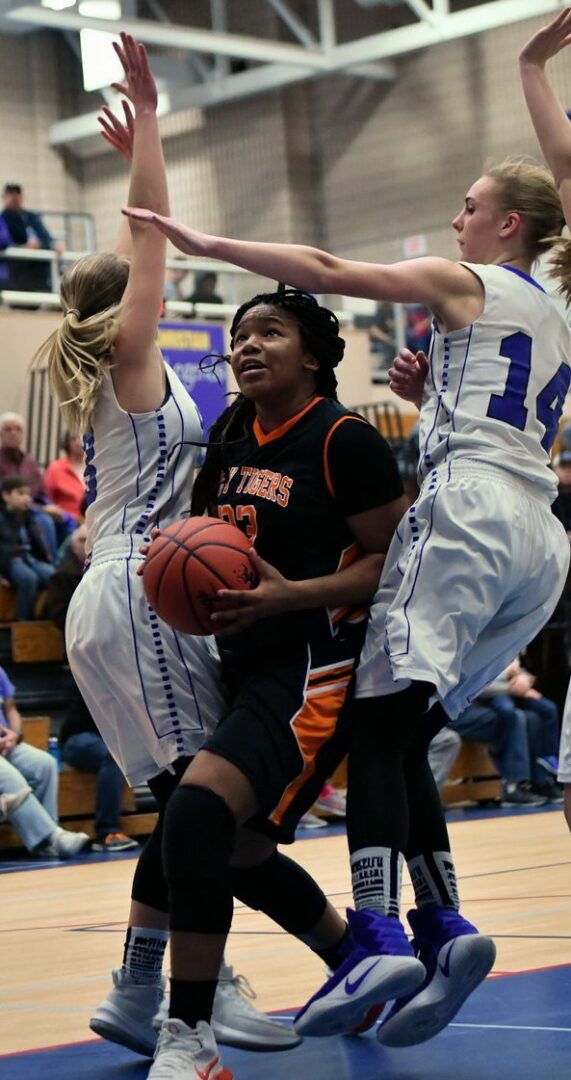 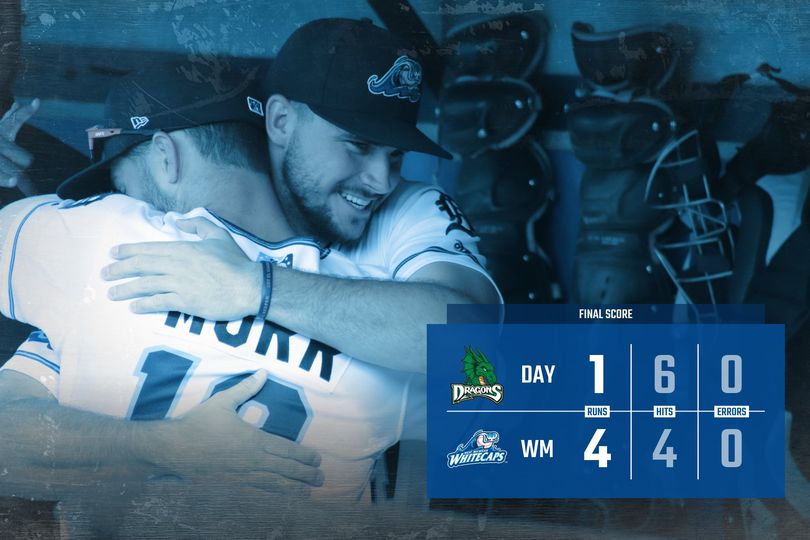