Spring Lake boys wake up in second half, down Montague to advance to Class B finals

for the Spring Lake Lakers, Coach Bill Core added a little more fuel to their fire.

He questioned the desire of the Lakers’ seniors, after they played an uninspired two quarters of basketball and trailed Montague by six points at halftime.

“I challenged our seniors,” Core said. “I said, ‘(Montague) doesn’t have a single senior on their roster and they’ve come in here and are playing loose and are taking it right to us. And they’re doing it on both ends.

“You seniors have a look in your eye that I haven’t seen. This is your team, this is your year. You have to do it better.”

The seniors and the rest of the Lakers accepted the challenge. They tamed the Wildcats in the second half with a dominating defensive effort, holding them to just eight points in a 47-37 victory in a Class B district semifinal. 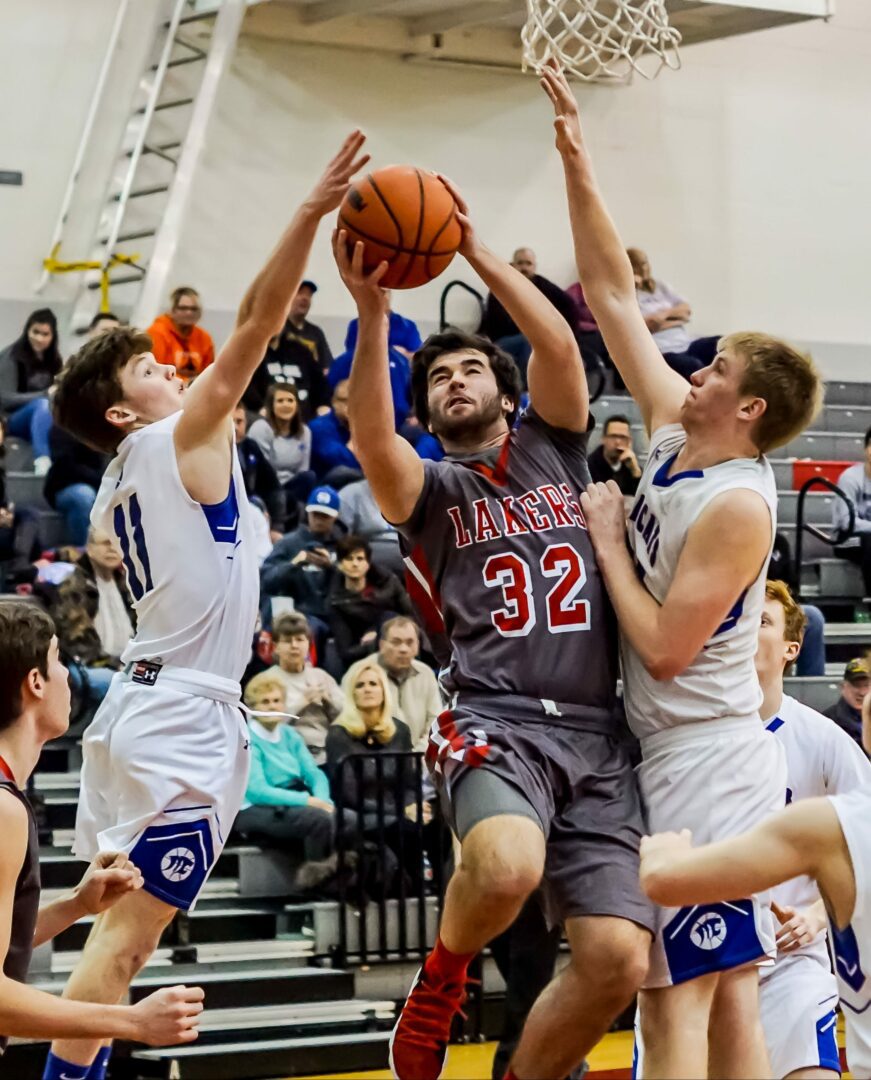 The Lakers, now 18-4 on the season, will have a chance to defend their 2017 district championship on Friday against Oakridge, which was a surprise winner over West Michigan Conference rival Whitehall in Wednesday’s earlier semifinal.

The Lakers will be chasing their fifth district title in seven seasons.

The Lakers’ key to limiting the Wildcats was slowing their 6-foot-6 junior center, Hunter Mosher, who burned Spring Lake with 13 first-half points.

Spring Lake held him scoreless in the second half.

“He was getting it too easy in good spots,” Core said. “So we told them, ‘Let’s mix it up on him.’ Let’s front him a little more, three-quarter him, bump him off his spot and just make it a little more frustrating for him.”

Montague Coach Dave Osborne admitted that the strategy was effective.

“Every time Hunter touched the ball, he had two, three guys around him,” said Osborne, whose squad finished the season with a 13-8 record. “Obviously, it’s tough to shoot out of that, but also to pass. We had guys cutting, but he wasn’t able to see them in time, or just wasn’t able to make the pass.

“Credit to Spring Lake. They knew our offense ran through Hunter and their adjustment was the difference.”

Montague ran into even more trouble when its outside shooting went cold in the second half. The Wildcats connected on four three-pointers in the first half, but finished the third quarter just 1-of-8 from the floor, with two turnovers and two offensive fouls. 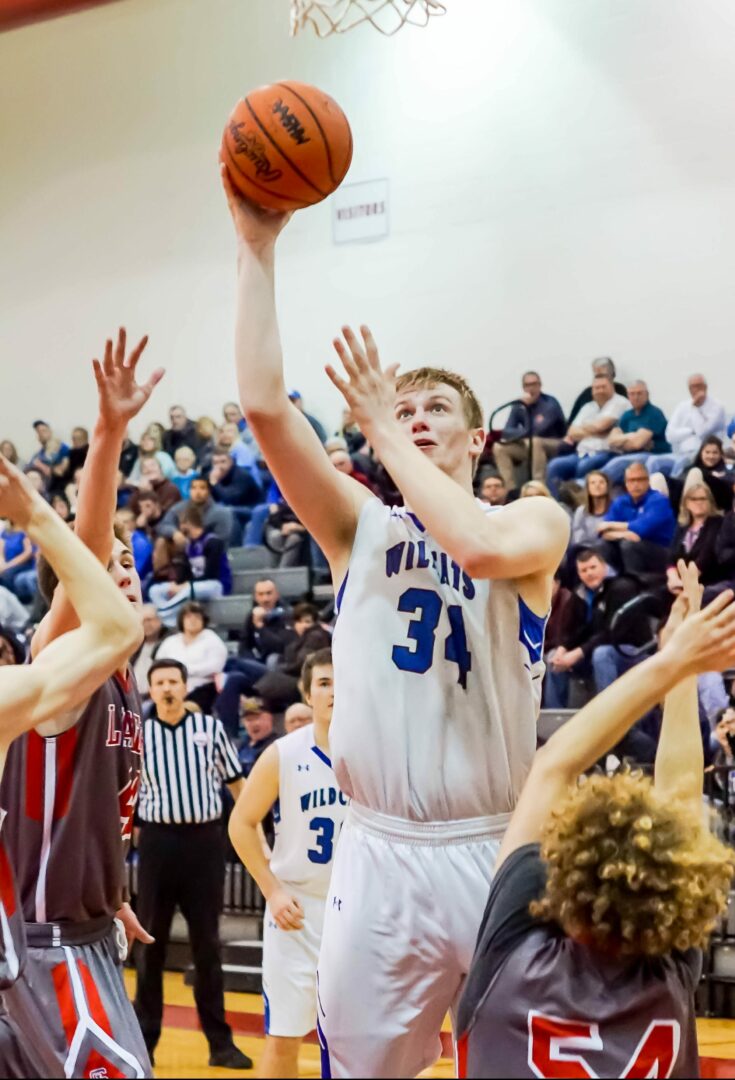 Montague led 29-23 at halftime. Spring Lake outscored the Wildcats 9-3 in the third quarter, making it a 32-32 game entering the fourth.

That’s when the Lakers took control of the game, outscoring the Wildcats 15-5 over the final eight minutes.

Spring Lake’s fourth-quarter surge was aided by its rebounding. With under two minutes left, senior Jack Van Wingen missed the front-end of a 1-and-1 free throw, but 6-8 center Sam Johnson snuck into the paint, corralled an offensive rebound and scored to give the Lakers a 43-35 lead.

Johnson led all scorers with 20 points and 14 rebounds, while Van Wingen snared 10 boards. The Lakers outrebounded the Wildcats overall, 36-24, and had 15 offensive boards.

“It feels good to get another chance to win a district title, especially playing at home,” Wiersma said. “Coach told us at half that we couldn’t put our heads down and we had to keep playing. We came out and picked up the intensity.” 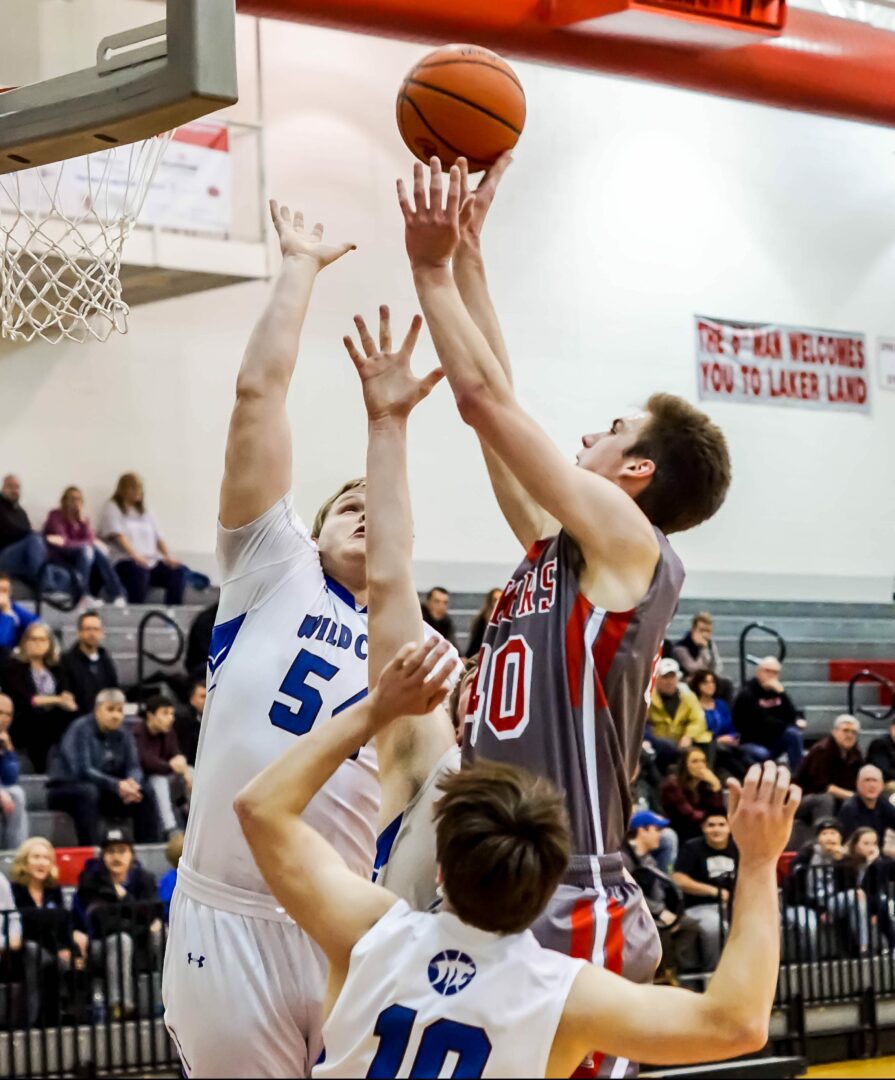 Sam Johnson finds room for the shot near the basket as Montague’s Luke Marsh goes for the block. Photo/Kris Rake 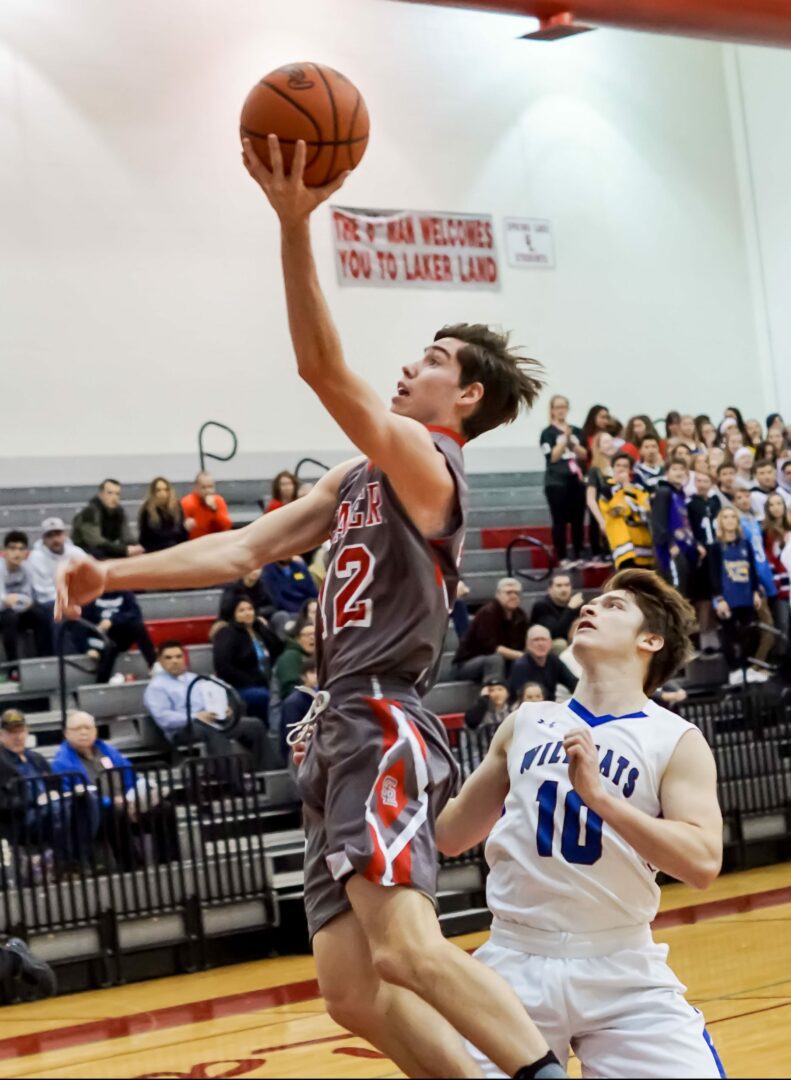 Jack VanWingen glides in for the layup past Montague’s Sebastian Archer. Photo/Kris Rake