By Noah Genson
LocalSportsJournal.com
FRUITPORT—It’s no secret in the area that Fruitport Calvary Christian’s Kelsey Richards

can score at will, and finding the right game plan to stop her is a tough task.

But that’s exactly what Western Michigan Christian was able to do on Tuesday night, holding Richards to a season-low 12 points and posting an impressive 51-29 win over Fruitport Calvary Christian in non-league action.
WMC junior guard Meghan Heiss was chosen to be the primary defender on Richards Tuesday night, and she did not disappoint.
“When you look at Meghan, she isn’t one of the taller girls on the floor,” said WMC head coach Jeremy Goorman. “But what she lacks in size, she makes up for in heart and determination.” 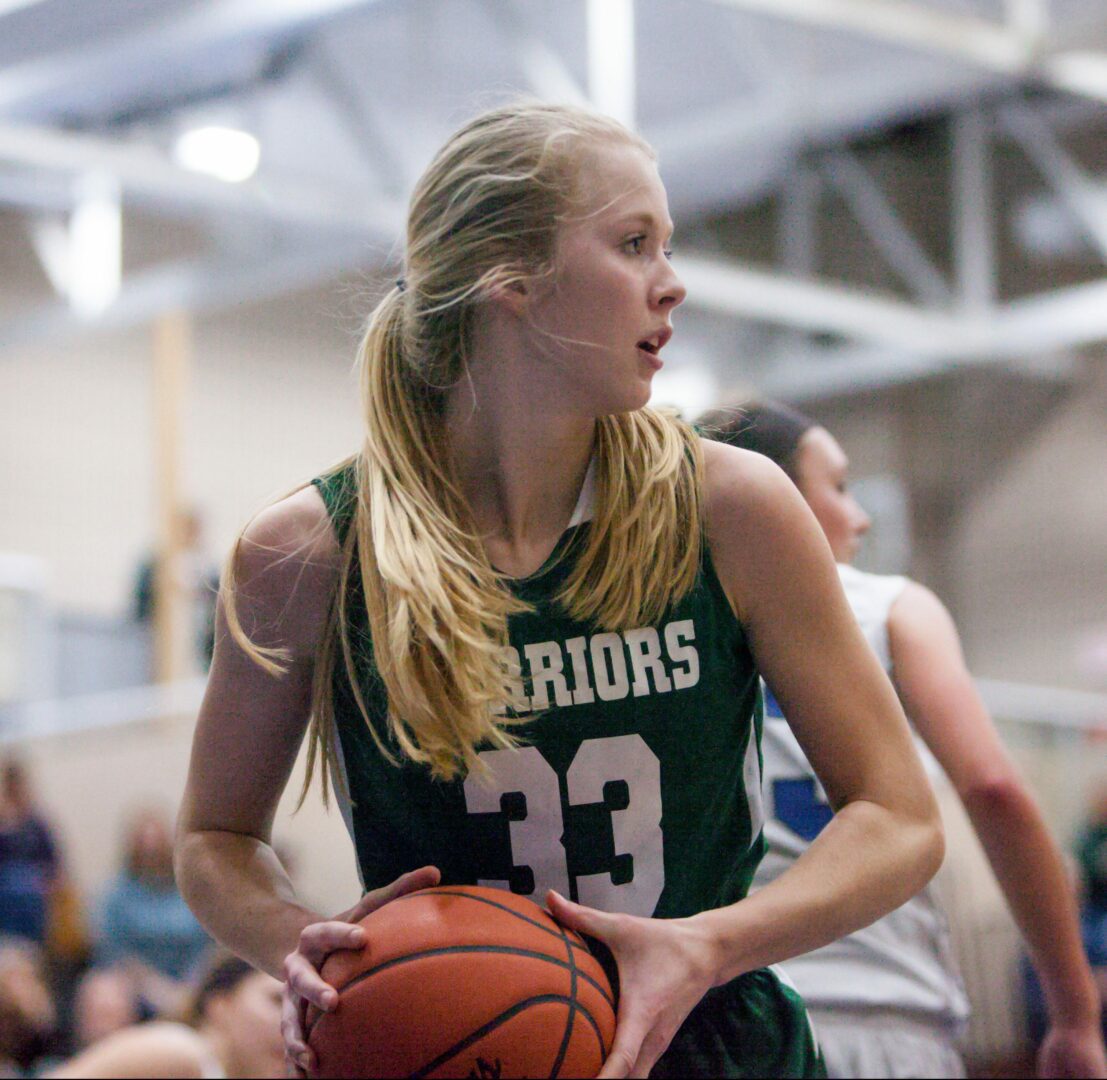 Taylor Folkema pulls down the rebound for WMC. Photo/Jason Goorman

The Warriors ran a diamond and one defense in the first half, which left the rest of the WMC defenders to clog the lane to stop Richards from penetrating.
“Whenever we could get two or three girls on her we went for it,” Goorman said. “I thought everyone played great and really knew their role.”
The Warriors jumped out to a 6-2 lead midway through the first quarter, and had an 11-7 edge at the first buzzer.
After a pair of free throws by Richards cut the WMC lead to just two, the Warriors went on a 10-6 run to end the second quarter and took a 21-15 lead into the break.
The Warriors pulled away in the third, outscoring the Eagles 16-4, and took a commanding 37-19 lead into the fourth.
“We only had five turnovers in the first half and that really kept us in the game,” said Eagles Coach Brad Richards. “In the third quarter alone we had five turnovers, so that gave them some more opportunities, and we couldn’t convert on some easy ones on the offensive end.” 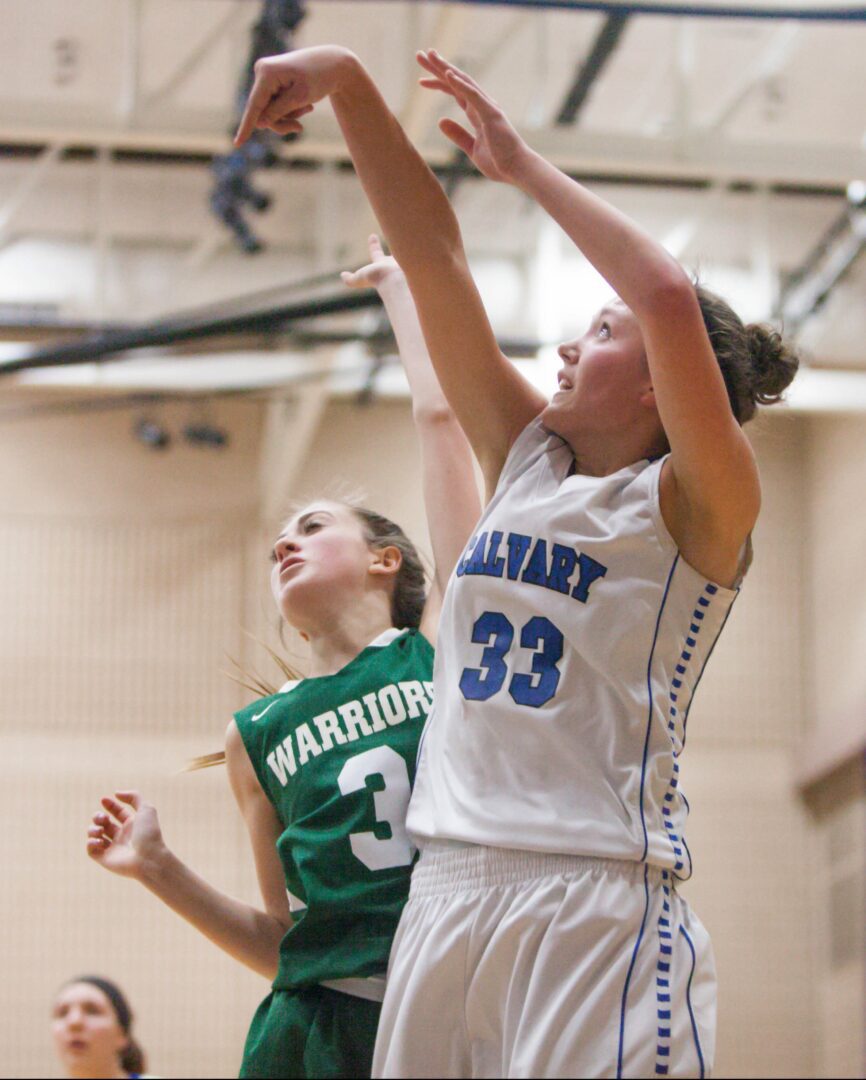 Kelsey Richards finds room for a jump shot in the corner for Fruitport Calvary. Photo/Jason Goorman

The Eagles could get no closer than 19 points in the fourth quarter, and the Warriors cruised to the victory to remain undefeated on the season.
Taylor Folkema paced the Warriors with 16 points and six rebounds, while Anna Sytsema chipped in with 12 points in limited minutes due to foul trouble.
Even with his team’s 7-0 start, Coach Goorman saw some things tonight that he knows his girls need to improve on.
“At the end of the game, I don’t think we handled the pressure they were putting on us as well as we should have,” he said. “We haven’t seen much pressure this year, but we have some matchups coming up where we need to be ready to face some pressure.”
Lizzie Cammenga chipped in with 10 points for the Eagles.
“It’s never great to lose, but I think this was good for us,” said Coach Richards. “We’ll be able to look at this film and figure out how we can handle that kind of defense later in the season.”
The Eagles are now 4-2 on the season. 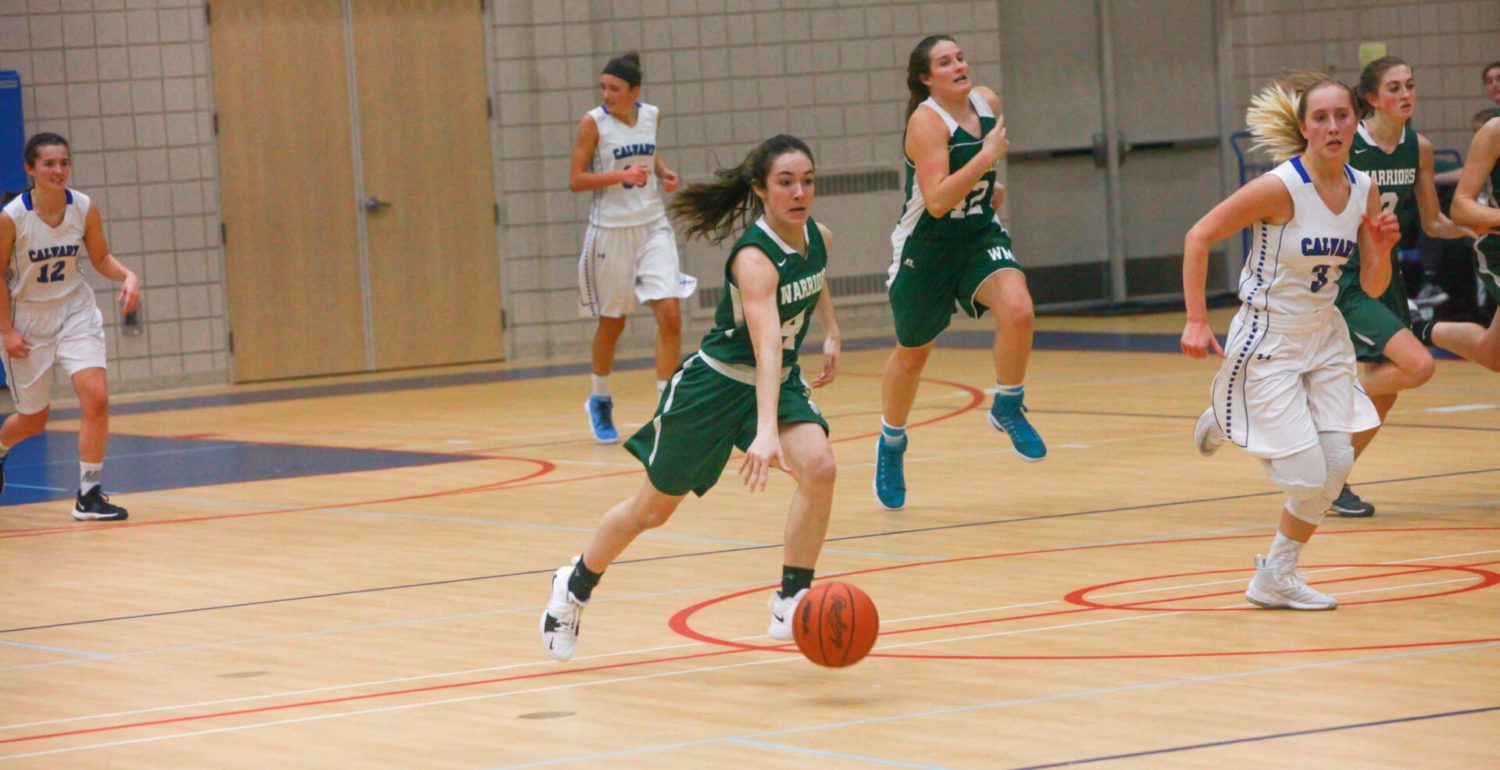 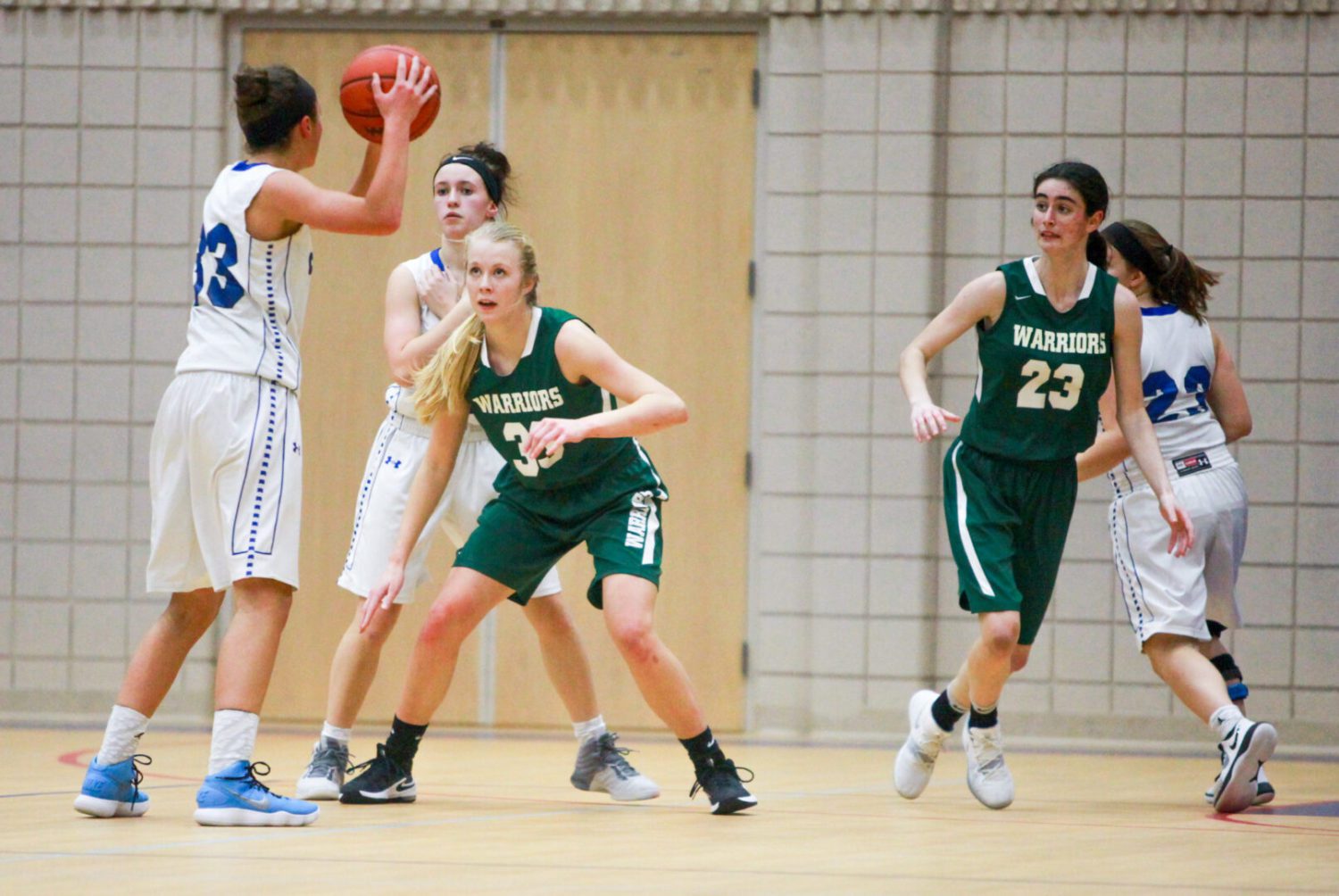 WMC’s Taylor Folkema gets ready for the pick while defending against Kelsey Richards. Photo/Jason Goorman 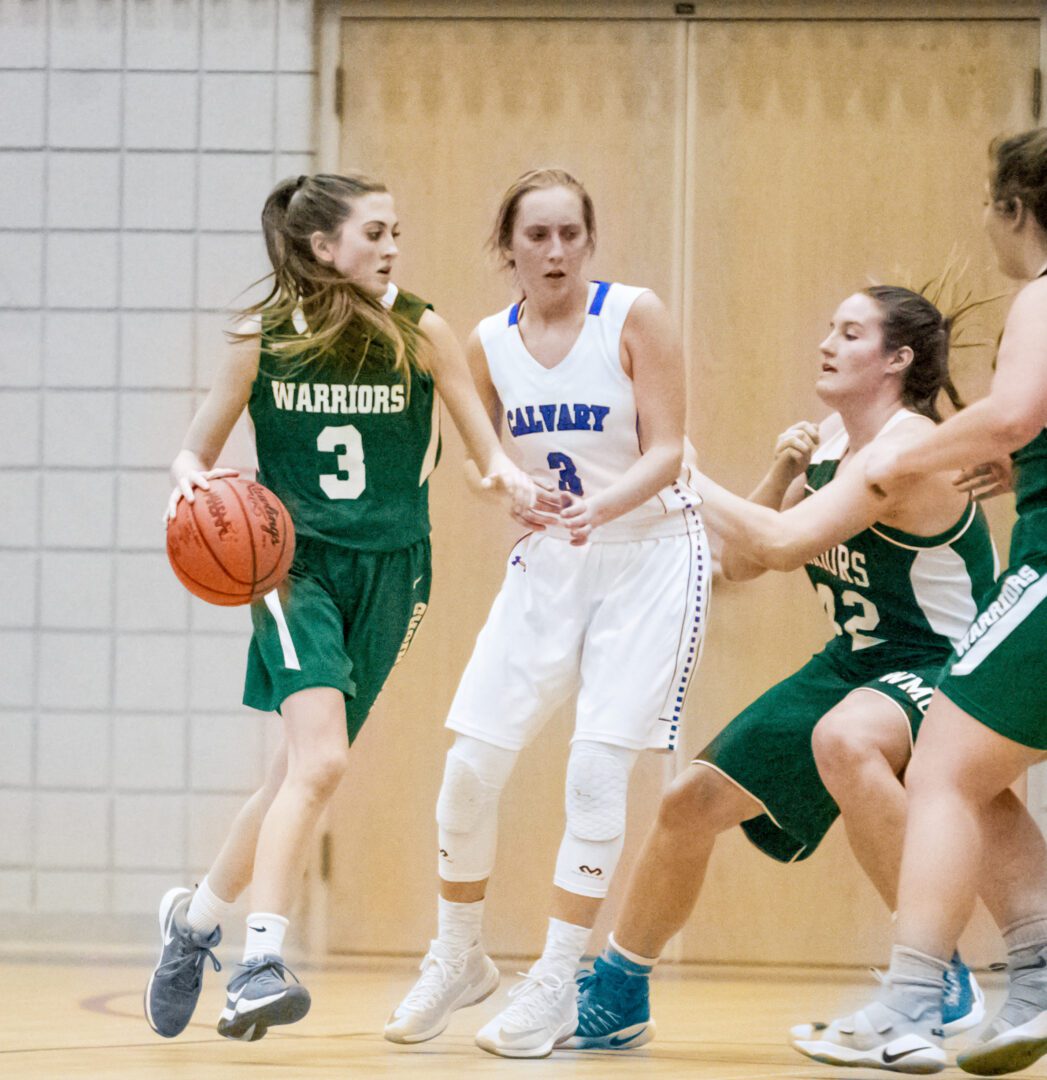 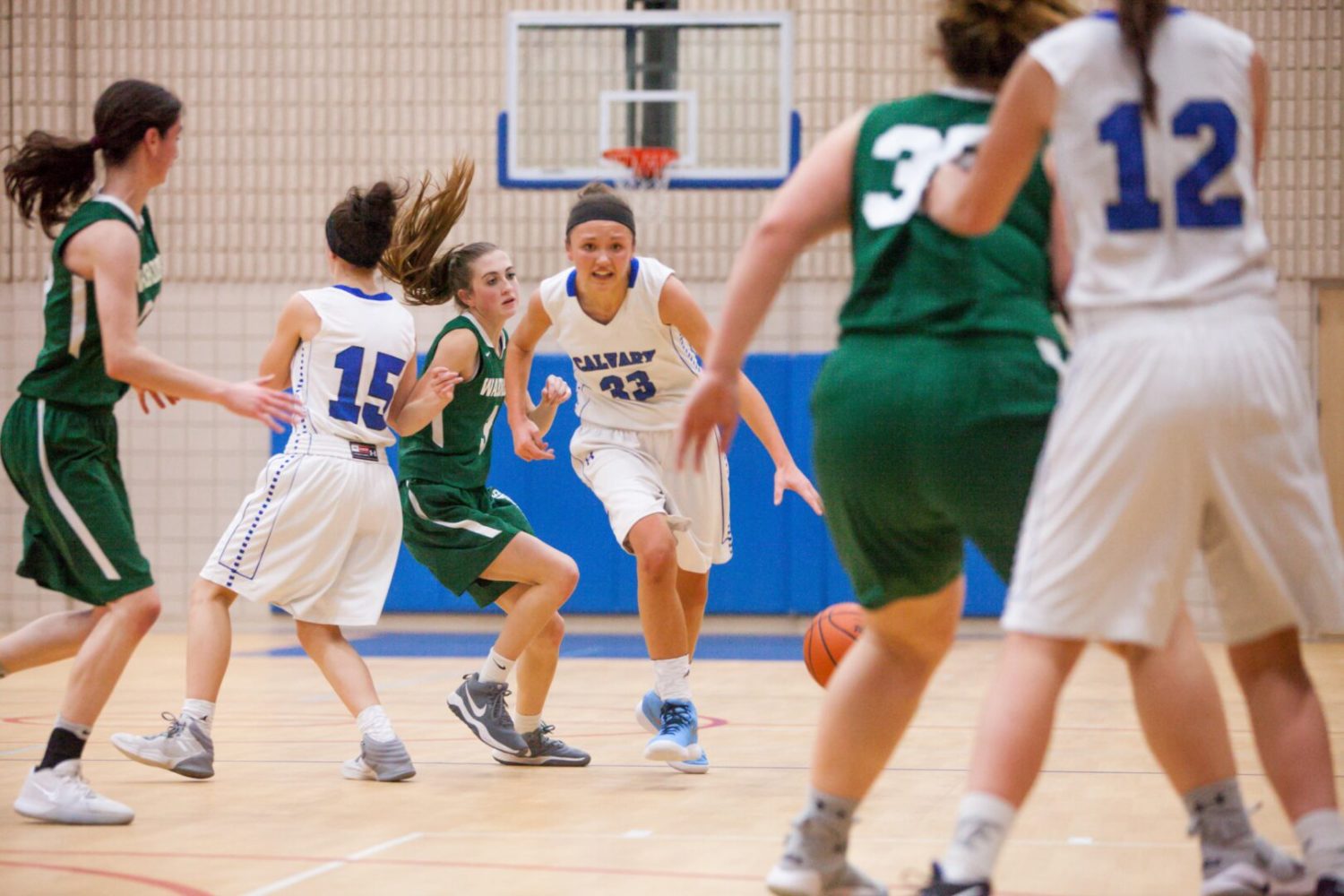 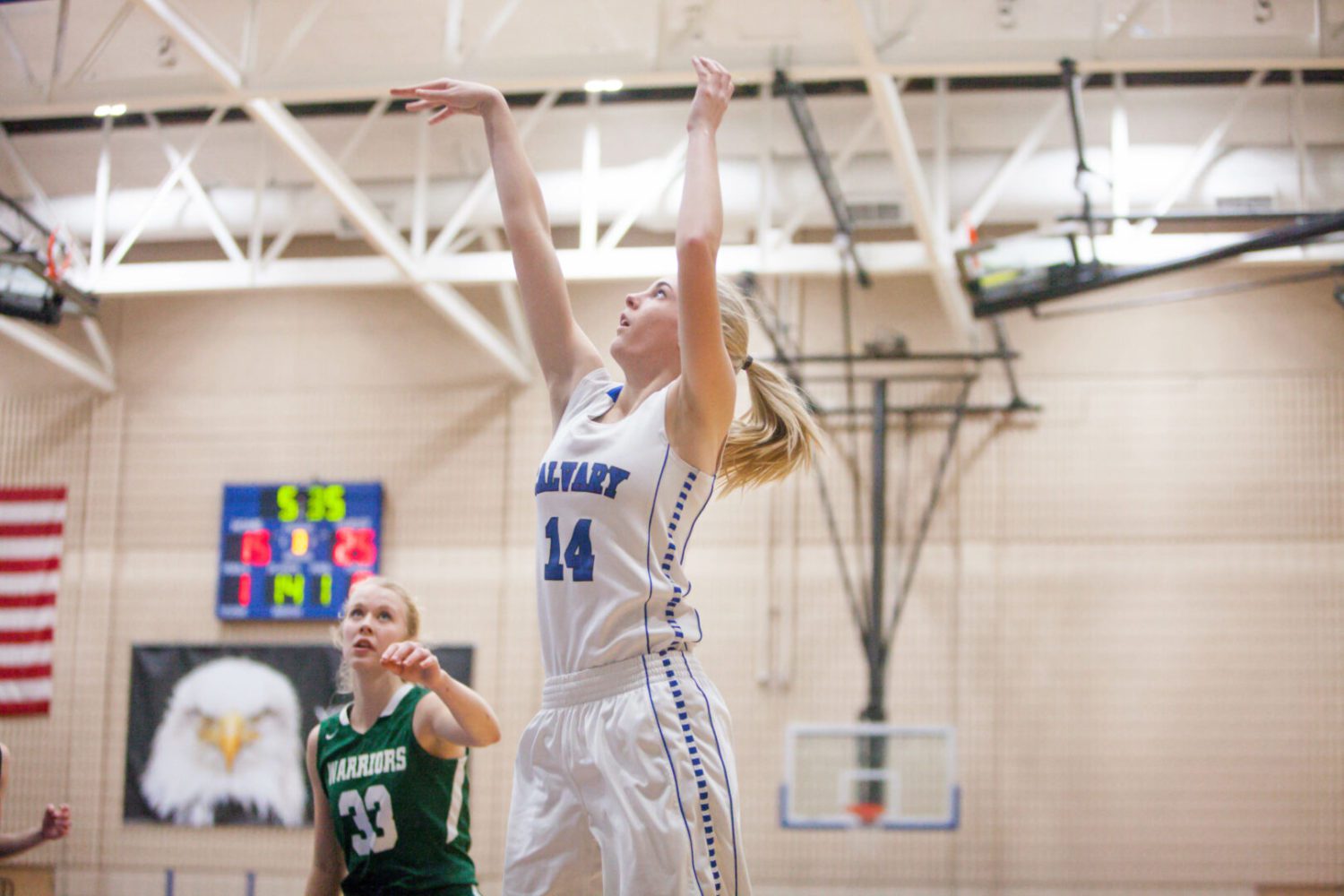 WMC’s Kayla Johnson cruises in for the two-point basket on the fast break. Photo/Jason Goorman

After a so-so start, the Holton softball team is back in the state semifinals