MUSKEGON – In Monday’s newspaper, the Detroit Free Press picked the Muskegon boys basketball team to advance all the way to the Final 4 in the Division 1 state basketball tournament.

If the Big Reds are going to get that far, they will have to show a lot of poise against some very tough opponents who would love to end their winning streak.

The Big Reds showed that they can do that on Monday against an extremely determined Grand Haven squad.

Muskegon overcame a halftime deficit, battled through some tense moments in the second half and held its composure down the stretch. The result was a hard-fought 64-57 victory for the Big Reds in front of their home fans on the opening night of March Madness.

The Big Reds, now 18-3 and the winners of 15 straight games, advance to Wednesday’s district semifinal game against Grand Rapids Union at 7:30 p.m. at Redmond-Potter Gymnasium. 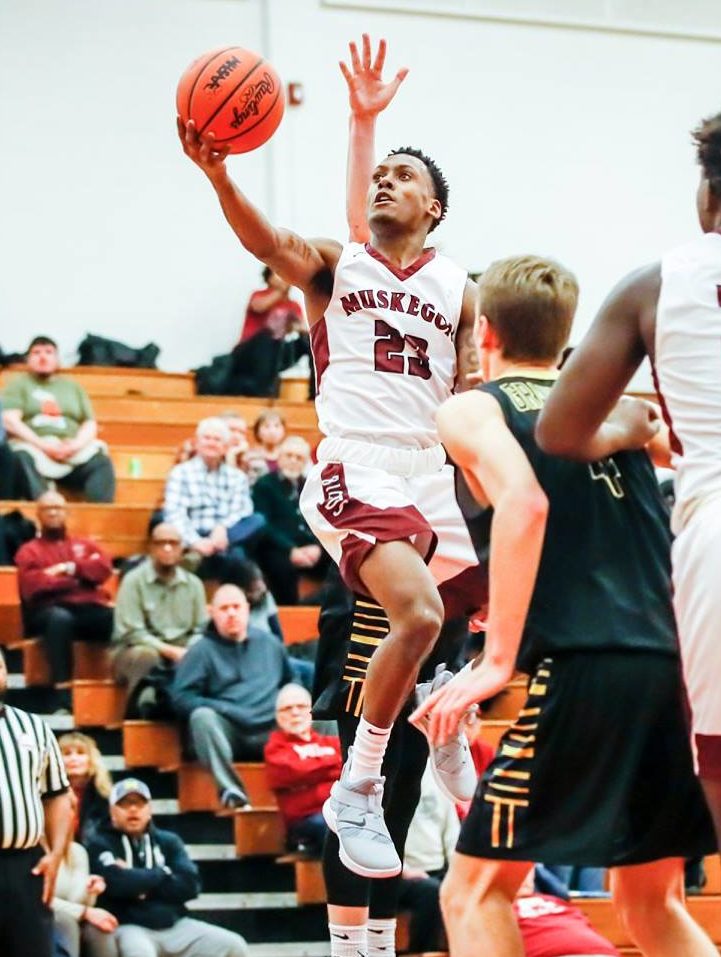 DeAndre Carter scoops his way through the lane for Muskegon. Photo/Tim Reilly

“I will take it easy, I will take it hard, one point or 30 points,” Muskegon Coach Keith Guy said about winning a game in the tournament. “I’m just thankful these guys were resilient enough to make it through some of the tough stretches we had, and a couple of good stretches they had. Our guys bounced back and made a few more plays than they did.”

The hero for the Big Reds was junior guard Vern Nash, who made lots of big plays when they mattered the most, even while battling a case of strep throat.

With Muskegon clinging to a 45-43 lead after three quarters, Nash went to work, hitting a three-pointer midway through the quarter to extend the Big Reds’ lead to six points, nailing a driving layup with 2:27 remaining to keep the lead at six, then calmly making 7 of 7 free throws down the stretch to ice the victory.

Nash had 12 points in the fourth quarter and totaled a game-high 21. De’Andre Carter added 12 points for Muskegon while Billie Roberts chipped in 10 from the paint.

Those performances backed up the words of Coach Guy, who insists his Big Reds still have plenty of offensive options, even if opponents key on leading scorer Jarvis Walker, who was limited to nine points on Monday.

“We’re a team of balance,” Guy said. “People come in and try to take guys away, and I’m okay with that, because we have a lot of guys who can play.”

The Buccaneers demonstrated right away that they were not afraid to go toe-to-toe with the Big Reds. They scored the first four points of the contest and led 19-13 at the first buzzer. Senior guard Bryce Taylor had the hot hand, scoring eight of his 19 points in the first quarter. 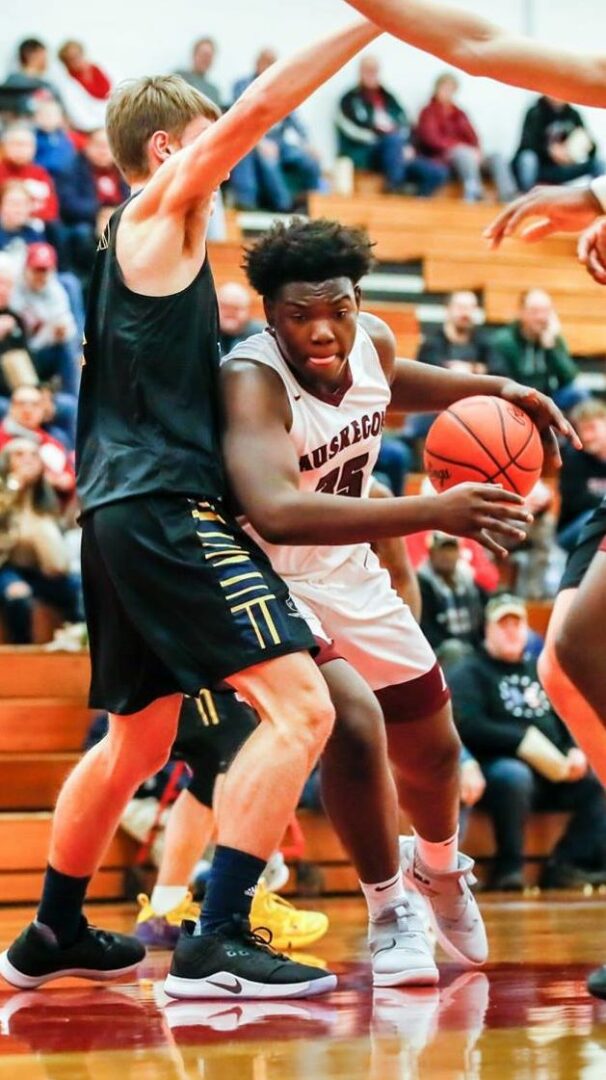 Billie Roberts tires to make his way through the lane against the Grand Haven defense. Photo/Tim Reilly

Muskegon scored the first six points of the second quarter and tied the game 19-19, but Grand Haven answered with an 8-2 run to take a 27-21 lead with about four minutes left in the first half.

The Bucs clung to a 29-27 edge at halftime. Muskegon was a bit cold from the floor in the first two quarters, missing some easy shots and converting only 9 of 22 field goal attempts.

Muskegon opened the third quarter with a 7-0 run, and a lot of fans probably suspected that the Big Reds were about to take control. But again Grand Haven fought back, despite severe foul trouble for two starters, and scored the next six points to take a 35-34 lead with 4:14 remaining in the quarter.

The teams traded buckets for the rest of the third, and the Bucs got the last points when they held on to the ball for the final minute to get the last shot. The intended shot missed the mark, but Taylor scooped up a loose ball and hit a layup at the buzzer, leaving Muskegon with a 45-43 lead after three.

Senior guard Casey Constant had the hottest hand in the third for Grand Haven, scoring eight of his 19 points.

Muskegon held its lead throughout the fourth quarter of the physical, scrappy contest, when Nash hit his two big baskets, then showed a ton of composure by hitting all seven of his shots from the line.

“I thought we did a good job of keeping our composure (down the stretch), knowing it was a 32-minute game and not an eight-minute game,” Guy said. “Every year we play Grand Haven in districts and its always a war.

“We talked about it before the game. We said they are going to make some runs, we’ll make our runs, and we just hope we can make more runs than they do.”