But he’d like to do even better in bowling and basketball, and he will have several chances to do so over the next week.

On Friday and Saturday, he and his OV teammates will compete in a Division 2 high school bowling regional tournament in Grandville, trying to qualify for the state finals. 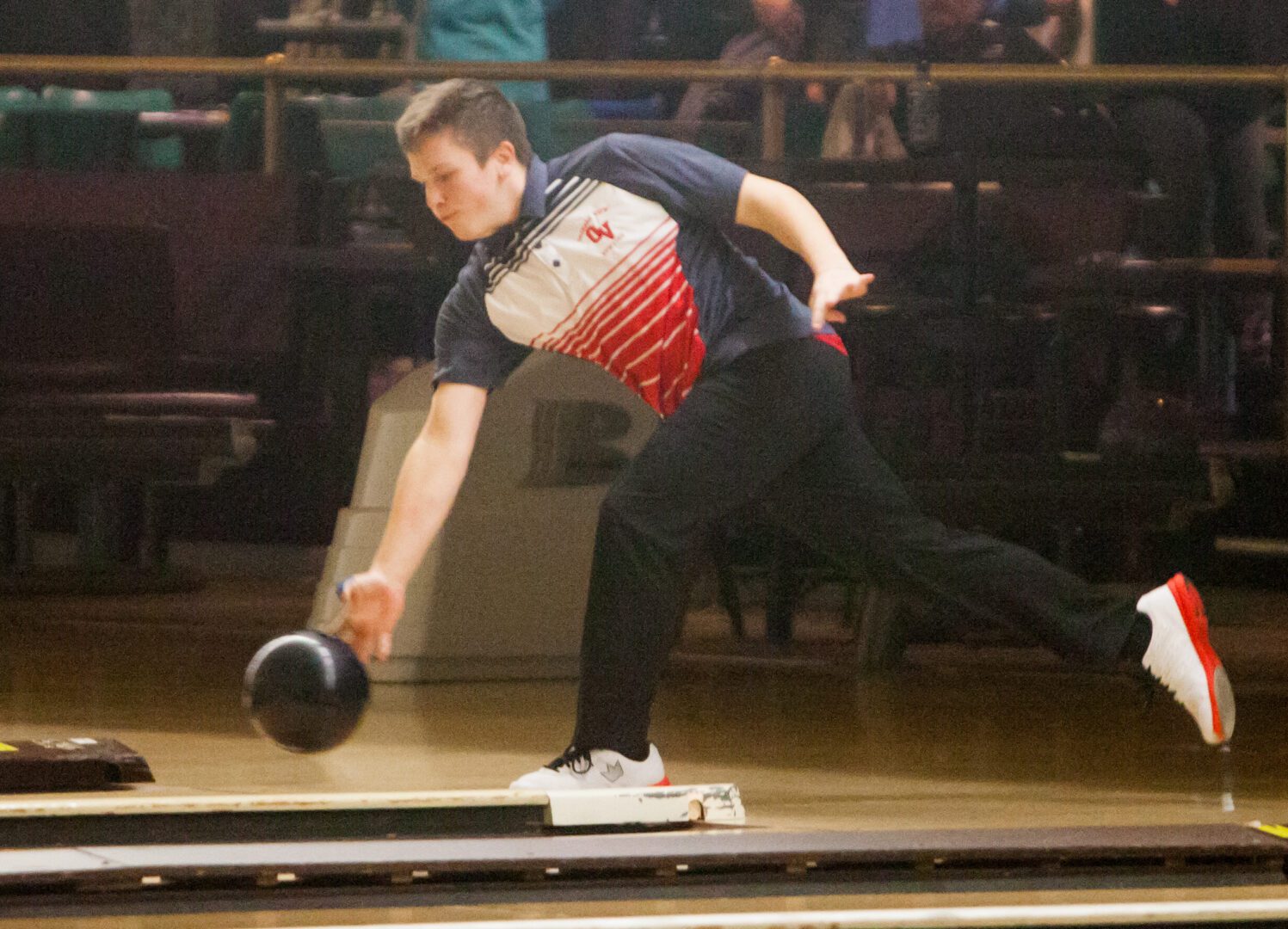 Then next week, Bowen and his teammates on the much-improved Orchard View boys basketball team will compete in a Class B district tournament on their home court.

While the team has been good, posting a 12-7 record with a game to go in the regular season, the Cardinals will finish no higher than third in the Lakes 8 Conference. They would love to have a district trophy to cap the program’s first winning season in quite some time.

If all of that sounds like a lot to accomplish in a few short days, it’s just par for the course for Bowen, a 5-foot-7 dynamo of an athlete.

He already had a great fall as a standout center-midfielder for the Orchard View boys soccer team, which advanced all the way to the Division 2 state quarterfinals, and he will turn to baseball as soon as basketball and bowling are done.

But winter is particularly busy, because he juggles two sports and takes both very seriously.

A good example was on Wednesday, when Bowen spent all day with the OV bowling team at the Coastal Conference Tournament, then had to hustle to get to the OV basketball game in Shelby. 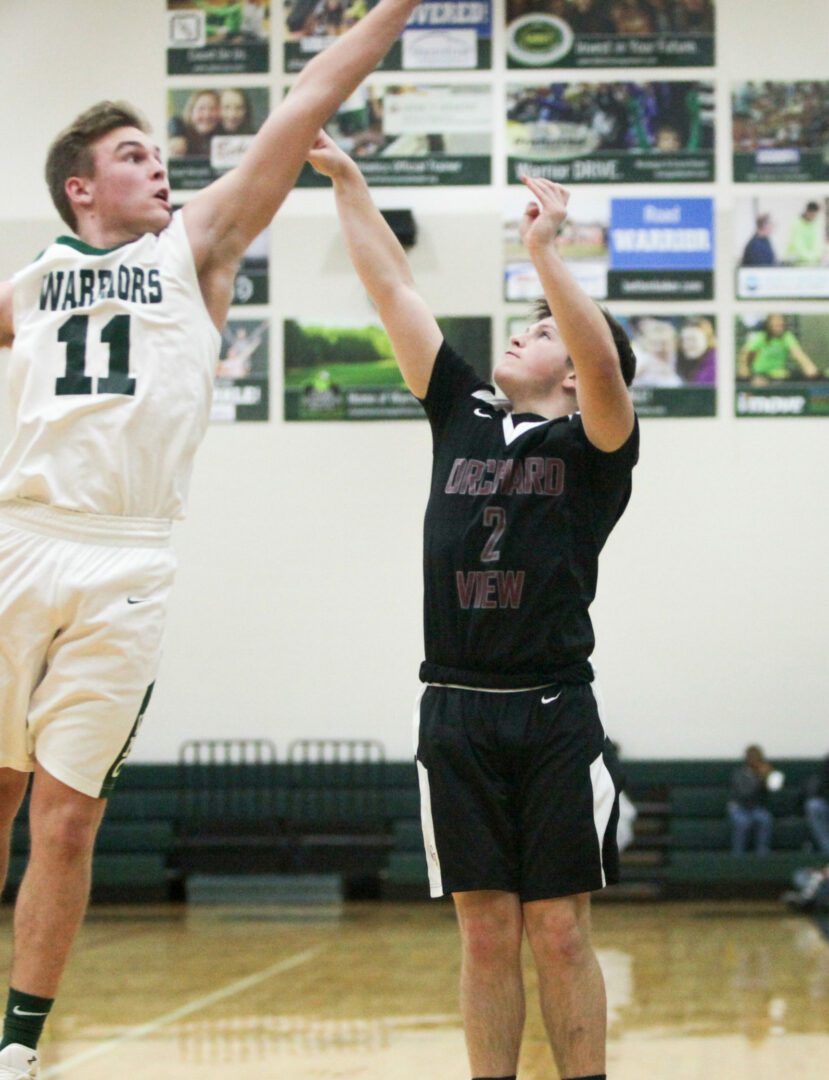 Brady Bowen laces the shot over WMC’s No. 11 Nick Moser during a Lakes 8 matchup on January 4. Photo/Jason Goorman

“His dad is really good about coordinating it all,” said OV boys basketball coach Nick Bronsema. “Yesterday he bowled all day, and got to Shelby for the game around 7. We started at 7:30. He was just in time.”

“This is really the busiest time of the season for me, but it works out perfectly in my schedule” said Bowen, 17. “It’s tiring most of the time, but sports are where I met most of my friends, and it’s all really fun.”

Bowen’s father, Bill Bowen, has obviously had a big influence on Brady’s choice of winter sports. He is an assistant coach for the OV boys basketball team, and is also the head coach of the Muskegon Community College bowling team.

As any coach’s kid will tell you, top effort is expected at least most of the time,  and Bowen lives up to that expectation.

“My parents are always pushing me to do my best in any sport I play,” he said.

Of course Bowen gets the most attention for his accomplishments in basketball.

He is one of the more deadly outside shooters in the area, and leads his team in 3-point shooting percentage. He had two really big games this season from beyond the arc, hitting six triples against both Western Michigan Christian and Shelby.

Most of the season he was the team’s shooting guard, but Bronsema recently moved him to the point, because Bowen has basketball smarts, and is good at running the offense and controlling its pace. 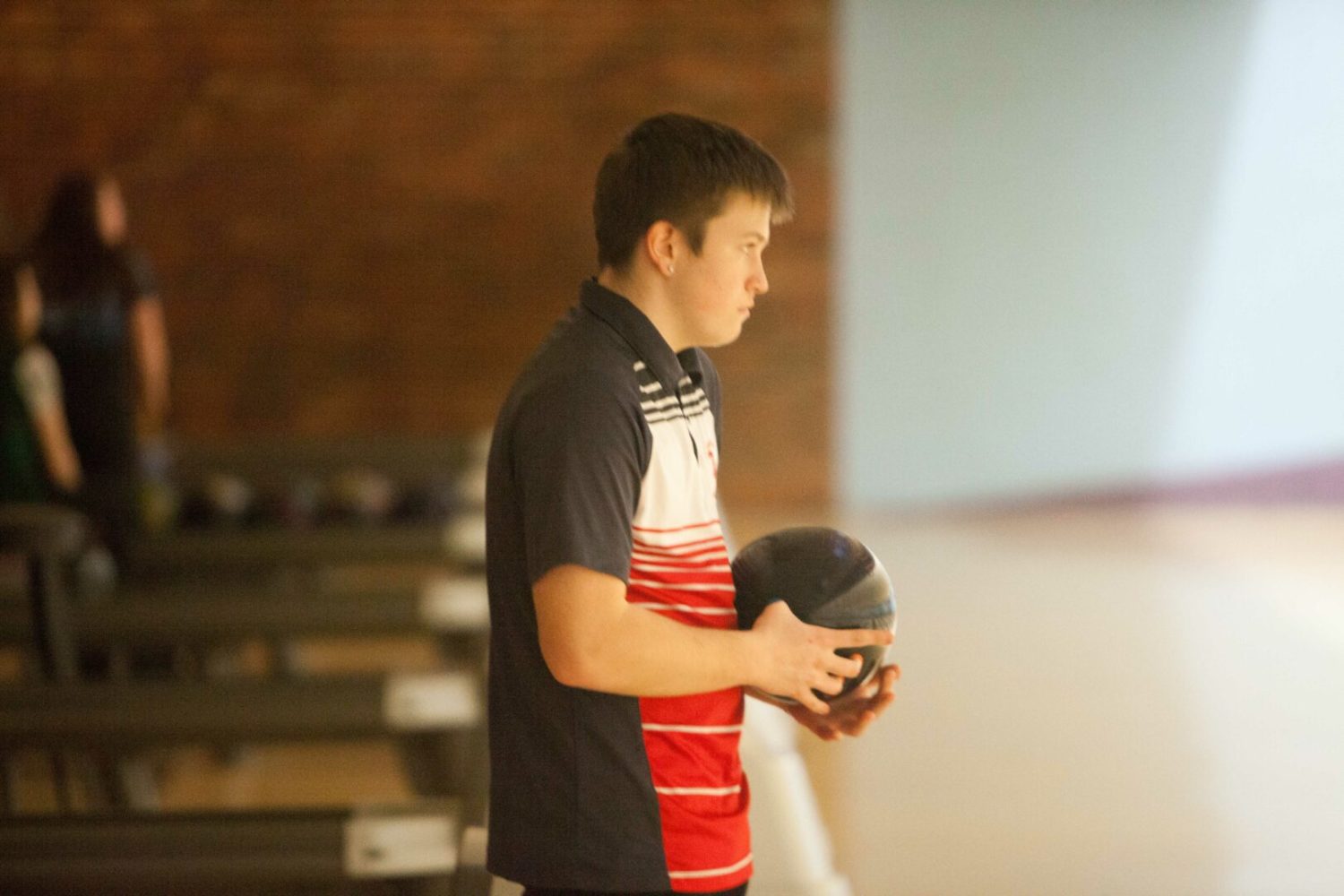 “We want the ball in his hands more often,” Bronsema explained. “He has great instincts on the court that allow him to play bigger than his size. He plays smart and does the little things well.”

This season the Cardinals started out 7-0, and will finish with a winning record for the first time in quite a while. They are currently 12-7 with a game left against Ludington on Friday.

But just being over .500 isn’t good enough for Bowen and the Cardinals. They would love to cap things off with a district championship next week, and Bowen thinks they can do it.

The Cardinals drew a first-round bye in the tournament, and will play the winner of the Whitehall-Fruitport game in Wednesday’s semifinals.

“Everybody is starting to buy into what we’re doing, and it’s getting fun,” Bowen said about the basketball team. “We’re starting to learn how to win, and win big games. We got a good draw in districts. If we play up to our potential, we can win.” 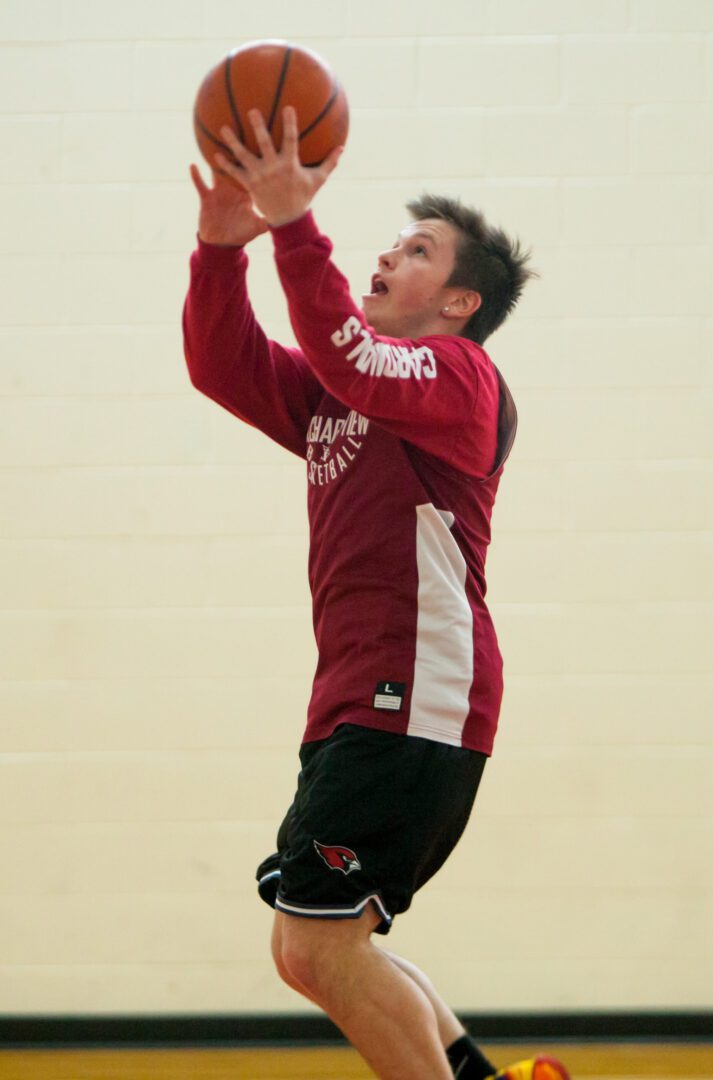 Bowen goes in for a layup during an OV basketball practice on Thursday. Photo/Jason Goorman

Just as important to Bowen is bowling. He’s been on the Cardinals varsity team since he was a freshman. He finished 11th in the state individually as a ninth-grader, failed to qualify for state as a sophomore, and qualified but did not place at state last season.

He’s had a great senior year of bowling so far, leading the Coastal Conference with a sizzling 222 average, but he hasn’t quite reached his goals, from a team or individual perspective.

The OV boys bowling team had a good season, going 8-4 in conference matches, which was good for third place. The team also finished third in the Coastal Conference tournament and third overall.

The Cardinals would love to qualify as a team for state.

Individually, Bowen had a great GMAA tournament last week, finishing with a 394 series. But that was second to tournament champion River Zwart of Oakridge, who bowled a 433.

In Wednesday’s Coastal Conference tournament, Bowen shot an impressive 678 series, but again finished second, this time to Derek Place of Ravenna, who bowled a 685.

“I told him you have to get off this runner-up stuff!” Orchard View Athletic Director LeRoy Hackley said with a laugh.

But Bowen isn’t laughing. He is tired of being really good, but only second best. In this weekend’s regional, the top three teams and top 10 individuals will qualify for state, and Bowen wants to be in that group.

“It’s pretty frustrating,” said Bowen, who threw a perfect 300 game in a match last season. “I told my friends I’m tired of finishing second. I need to pick up more spares.”

Regardless of how he does the rest of the way, Bowen’s bowling career is likely to continue. While his skills in numerous sports would give him several options for college, there is a good chance he will stay in town and bowl for his dad.

“I thinking about Muskegon Community College on a bowling scholarship,” Bowen said. 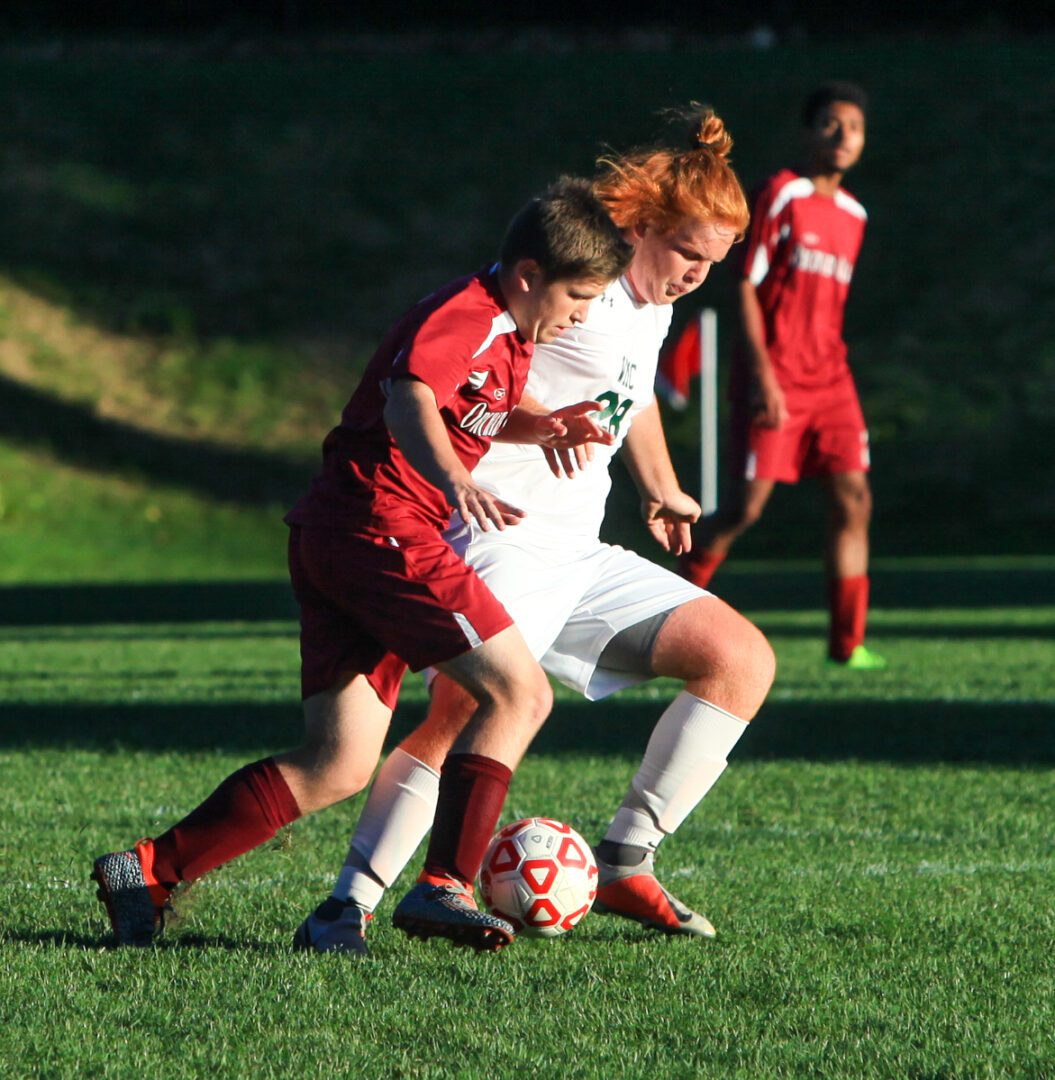 Brady Bowen tries to get around WMC’s No. 28 Brevin Byrne during an OV soccer game on October 4. Photo/Jason Goorman 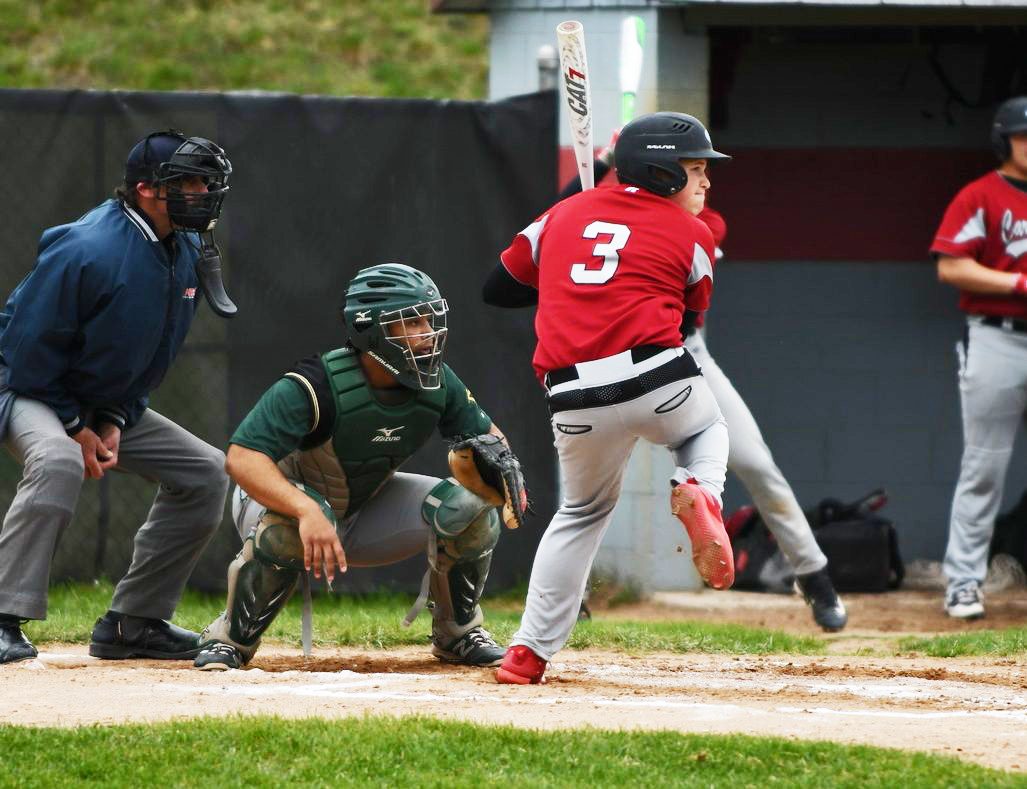 OVs Brady Bowen gets ready for the pitch back on April 28 during his junior season. Photo/Mike Banka