NORTON SHORES –  If this wasn’t her final season, or if Western Michigan Christian’s girls

basketball team was having a disappointing winter, maybe the pain

would be intolerable for senior Anna Sytsema.

But the Warriors are enjoying a tremendous season with an impressive 11-1 record, and Sytsema has played a big role in their success. She’s been able to find a way to grit her teeth and smile about the torn labrum in her left shoulder, an injury that when bumped the wrong way, or extended out too far, has brought the 6-foot forward to tears on the sideline.

“(The injury) happened over time during volleyball season,” said Sytsema, who earned second-team All State honors in Division 3 in volleyball last fall. “My dad (Marty) is a physical therapist, and he checked it out and said, ‘Oh yeah, that’s not a sprain, there’s something torn in there.” 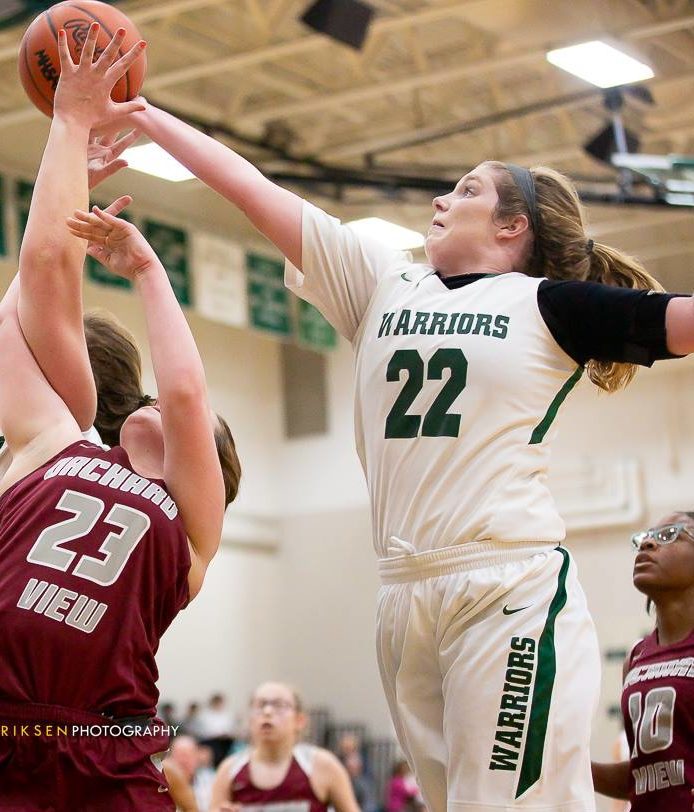 Anna Sytsema reaches for a rebound against Orchard View on January 4. Photo/Randy Riksen

“Our coaches said I can’t go up there and start laughing about it,” she said. “But it’s got to be pretty obvious to opposing teams why I’m doing it.

“It’s kind of sad to think about, but it’s actually helped me out. I’m way better shooting free throws now than the regular way before.”

And she’s having fun with it. Her teammates and classmates have nicknamed her injured shoulder “Dwayne” after actor and WWE wrestler Dwayne “The Rock” Johnson.

“We call it Dwayne because both my shoulder and The Rock are ripped,” Sytsema said with a laugh.

Warriors coach Jeremy Goorman said Sytsema is shooting about 62 percent at the free throw line, helping her increase her scoring average from 11.5 points per game a year ago to 14.5 this winter. She also grabs an average of seven rebounds per contest, although Goorman said she’s sometimes hesitant battling for boards because of her injury.

“She knows it’s going to hurt, but she just fights through it,” Goorman said. “That grit and determination, the rest of the girls have taken on that attitude. We’re a scrappy group and we’ve grinded out some victories.” 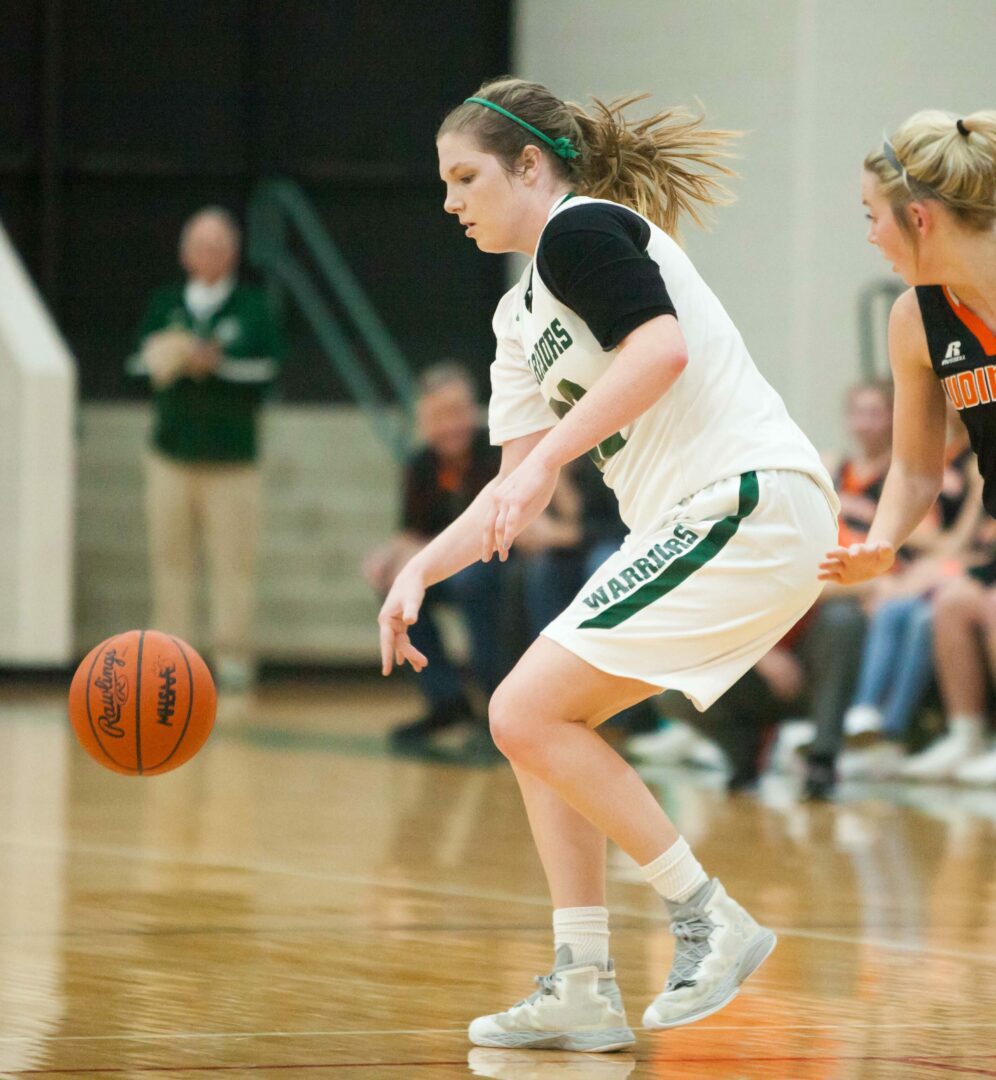 Anna Sytsema wearing her shoulder brace as she moves the ball up court against Ludington on January 11. Photo/Jason Goorman

WMC’s success has been somewhat surprising, considering the Warriors had to replace dominant post presence Aubrey Goorman from last season’s squad that finished 18-4 and won the Lakes 8 Conference championship.

Goorman’s loss has been eased by the emergence of sophomore forward Taylor Folkema, the team’s leading scorer who averages 20 points per game. She set a school record on Dec. 8, 2018, when she scored 39 points in a win over rival Muskegon Catholic Central.

“Her athleticism is so much greater than almost any player we’ll face, and it allows her to score a lot of points off of her defense,” Jeremy Goorman said. “She probably scores at least eight points a game off of steals and finishing in the open court.”

Added Sytsema, “Taylor showed up and had a mindset to kind of dominate right away.”

Added with the defensive tenacity of junior guard Meghan Heiss, who averages four steals a game, Goorman said WMC’s best offense is its excellent defense. It’s been even more vital because the Warriors lost one of their best outside shooters in junior Jenna Houskamp, who decided to sit out the rest of the season due to multiple concussions.

But the Warriors will keep grinding away, motivated by a senior who could have easily shut things down. Sytsema was told her chances of playing volleyball as a freshman at Calvin College next fall would be greater if she would have had surgery right away. She refused, instead deciding to just rehab the injury.

“Maybe I’d consider (surgery) if I was an underclassman, but with it being my senior year, I didn’t want to miss this,” she said. “Most games I hope I just have enough adrenaline to push through (the pain). But I just try to remind myself that this is my senior year. And what I’m going through now is just temporary.” 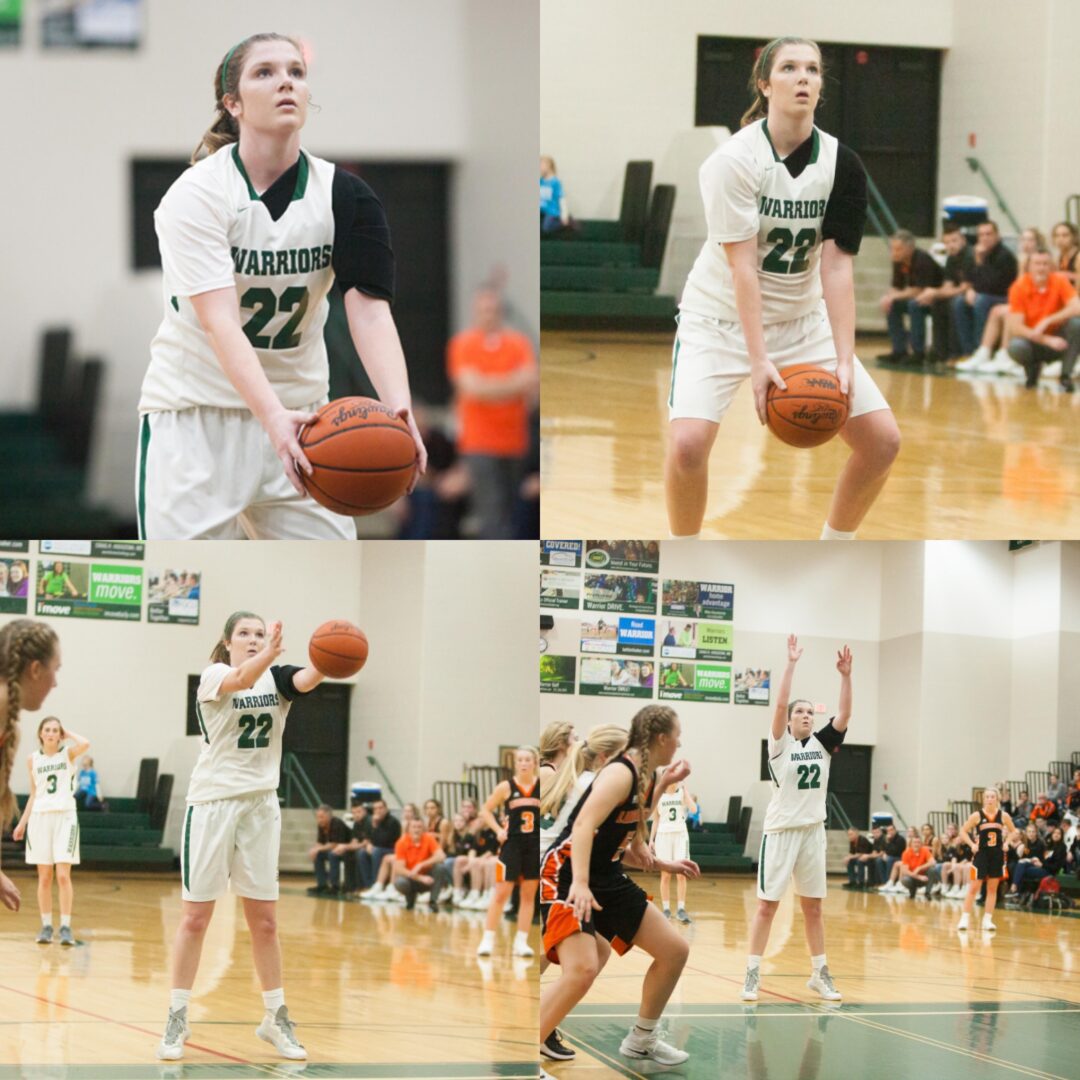 Anna System has adopted and embraced the “granny” shot at the free-throw line. Photos/Jason Goorman

LSJ Gridiron Picks: How about some more exciting football games, like last week?