Reeths-Puffer pitcher MaKayla Thompson recorded her 1,000th career strikeout in the opening game of the

R-P won the opener 8-3. Thompson pitched a complete game, scattering six hits and striking out 17. Rylee Rzepka had four hits for the Rockets while Paige Primmer had three and Trinity Westra had two. Tori Krukowski knocked in two runs.

Reeths-Puffer completed the sweep with a 9-0 win in Game 2. Thompson again pitched a complete-game win, giving up seven hits and striking out six. 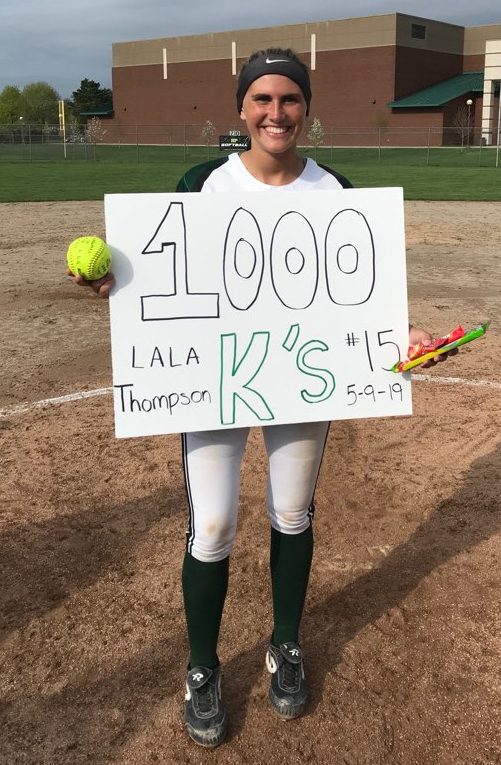 Makala Thompson stands with the game ball and sign after capturing her 1,000th career strikeout for Reeths-Puffer.

KENT CITY 5-9, HESPERIA 4-8 – Hesperia dropped the conference doubleheader in the most painful way.

In the opener, the Panthers led 4-2 going into the bottom of the seventh and final inning, but gave up three runs and lost. Carragan Frees had two doubles and three RBIs for Hesperia while Alyssa Miller hit an RBI triple.

In Game 2, Hesperia led 8-3 after four innings and 8-7 after six, but gave up two runs in the bottom of the seventh to lose in similar fashion. Miller had two hits and two RBIs while Frees had two hits.

Hesperia dropped to 7-10 overall and 6-7 in conference play.

Alicia Mumby continued her hot hitting with a double and a two-run homer, Jenna Core had a triple and scored three runs, and Lindsey Smith added a two-run single.

Spring Lake, ranked sixth in the state in Division 2, is 19-2 overall and 11-0 in the O-K Blue. The Lakers have won 89 consecutive conference games.

WHITEHALL 12-12, SHELBY 0-4 – Pitcher Carly Hubbard shut out Shelby with a complete-game in the opener, striking out 11 and walking none. Kate Martin had four hits for the Vikings.

In Game 2, Shelby grabbed a quick 3-0 lead, but Whitehall rallied and easily completed the sweep.