MONTAGUE – It helps a lot to have short fields to work with, particularly in very big games.

The Montague offense had the benefit of starting its first three drives from very favorable spots on Saturday, and took full advantage.

The Wildcats got the ball at the Sanford Meridian 33, 33 and 21-yard lines, thanks to a pair of shanked punts and an interception. That led to 20 easy points, and Montague went on to claim a convincing 48-14 victory on its home field in a Division 6 regional final game.

The Wildcats, 10-2 on the season, now advance to the state semifinals for the second straight year. They will play Maple City Glen Lake next Saturday at 1 p.m. at Clare High School, with the winner advancing to the Division 6 state finals at Detroit’s Ford Field.

Montague made the finals last year before losing to Jackson Lumen Christi. 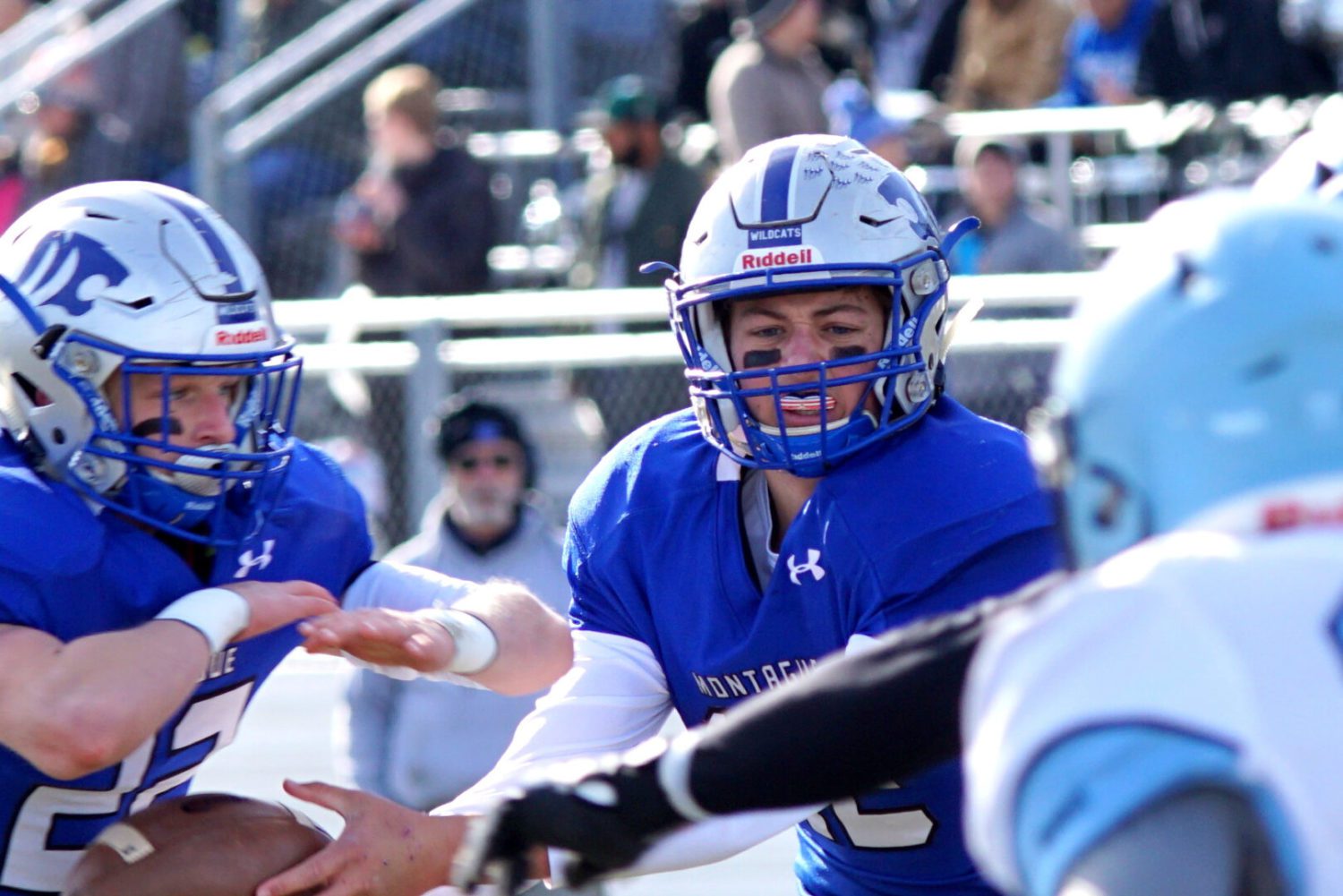 “A lot of the game was the field position battle,” said veteran Montague Coach Pat Collins. “It’s huge when your defense can make those stops and get you the ball back quickly, while not allowing a first down. It leaves us a short field to work with and we capitalized on that. It helped us get off to a fast start.”

The Mustangs took the game’s opening kickoff and quickly went three-and-out. On fourth down, punter Gabe Mutai kicked the ball off the side of his foot, and it only traveled 10 yards, to the 33.

Montague cashed in immediately when junior quarterback Drew Collins found Brennan Schwarz for a 33-yard touchdown pass on the first play of the drive. The extra point failed and Montague had a 6-0 lead 3:07 into the game.

“We’ve been working on our red-zone offense since the playoffs started, and in the short yardage it paid off this week,” Drew Collins said.

The next Sanford Meridian drive mirrored the first – three-and-out, a short punt and a Montague first down at the Mustangs 33.

It took the Wildcats five plays to score this time. Dylan Everett finished off the drive with a 3-yard touchdown run, the extra point was good and Montague had a 13-0 lead with 4:35 left in the first.

Sanford Meridian finished off the first quarter driving into Montague territory, but on the first play of the second, Montague’s Sammy Smith picked off a pass and returned it to the Mustang 21. 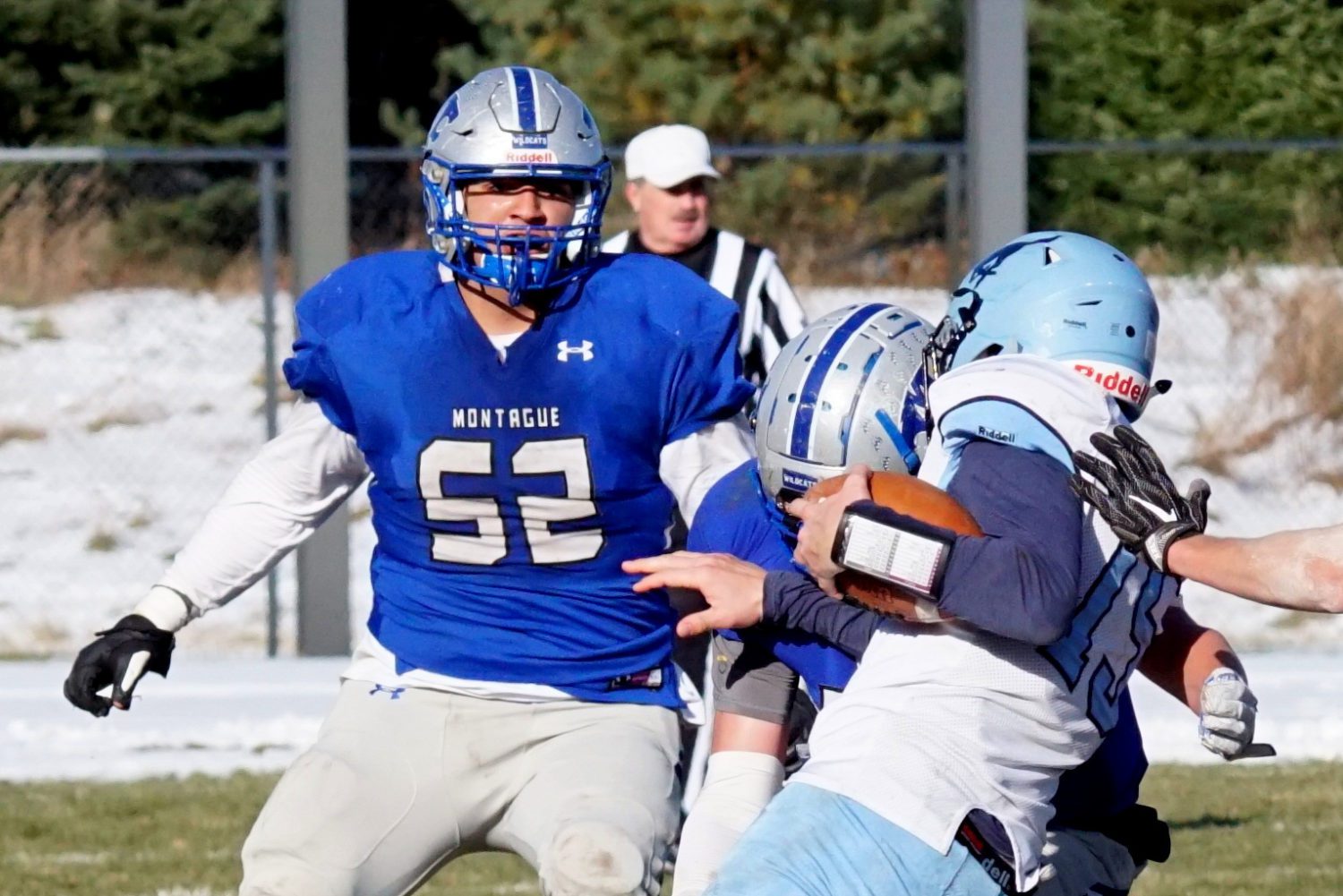 Montague’s No. 52 Walker Martin closes in on the Meridian rush. Photo/Leo Valdez

Three plays later, Collins hit Tuggs Nichols on a 17-yard TD pass, and the Wildcats led 20-0 lead with 11 minutes left in the first half.

Montague started its next drive at its own 8 and punted, but it was back in business soon after, because Swartz blocked a punt to give the Wildcats the ball back at the Sanford Meridian 8. Collins then scored on a 1-yard plunge, giving Montague a 27-0 halftime lead.

The Wildcat defense held Sanford Meridian to 14 total first-half yards, while the offense had 135 total yards.

“We knew they mostly wanted to run the ball, and we love that because we like to play physical,” Wildcats defensive tackle Walker Martin said. “And we played physical every single play.”

Montague took a 34-0 lead on the second play of the second half when Collins found Johnny Monette deep for a 61-yard touchdown pass 1:24 into the third.

The Mustangs cut the lead to 34-7 with three minutes left in the third on a 36-yard trick pass from halfback Brady Solano to quarterback Cameron Metzger.

Montague finished off their scoring in the fourth quarter on TD runs from Collins (six yards) and Everett (18 yards). Solano added a 3-yard score with 2:47 left in the game for the Mustangs.

Collins finished 18-for-25 through the air for 198 yards, and rushed for 59 yards on 10 carries. Everett had 67 yards on 12 carries. Monette caught eight passes for 107 yards and Schwarz added six catches for 64 yards. Hayden McDonald led the defense with 13 tackles. 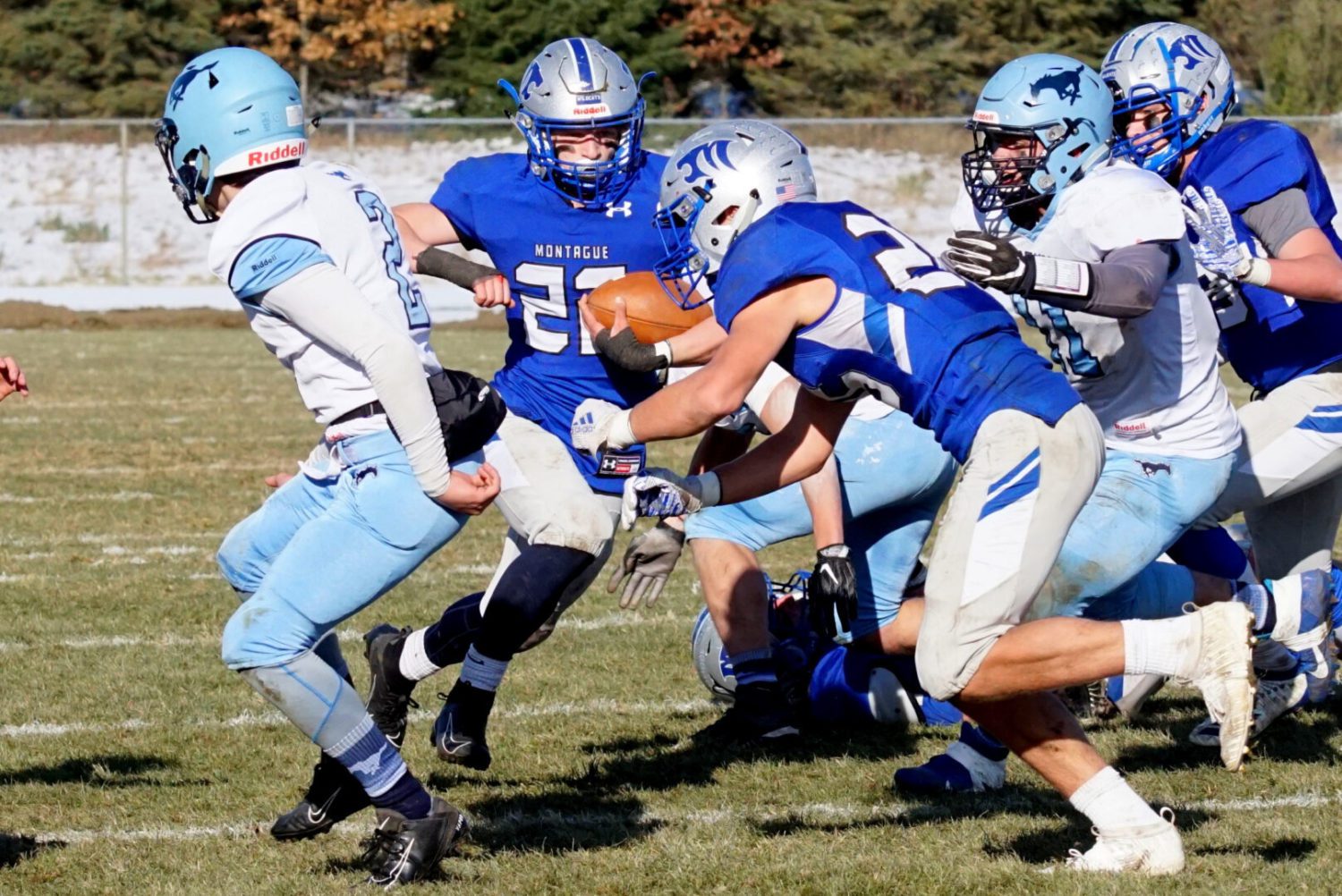 No. 22 Dylan Everett rushes the ball for Montague. Photo/Leo Valdez 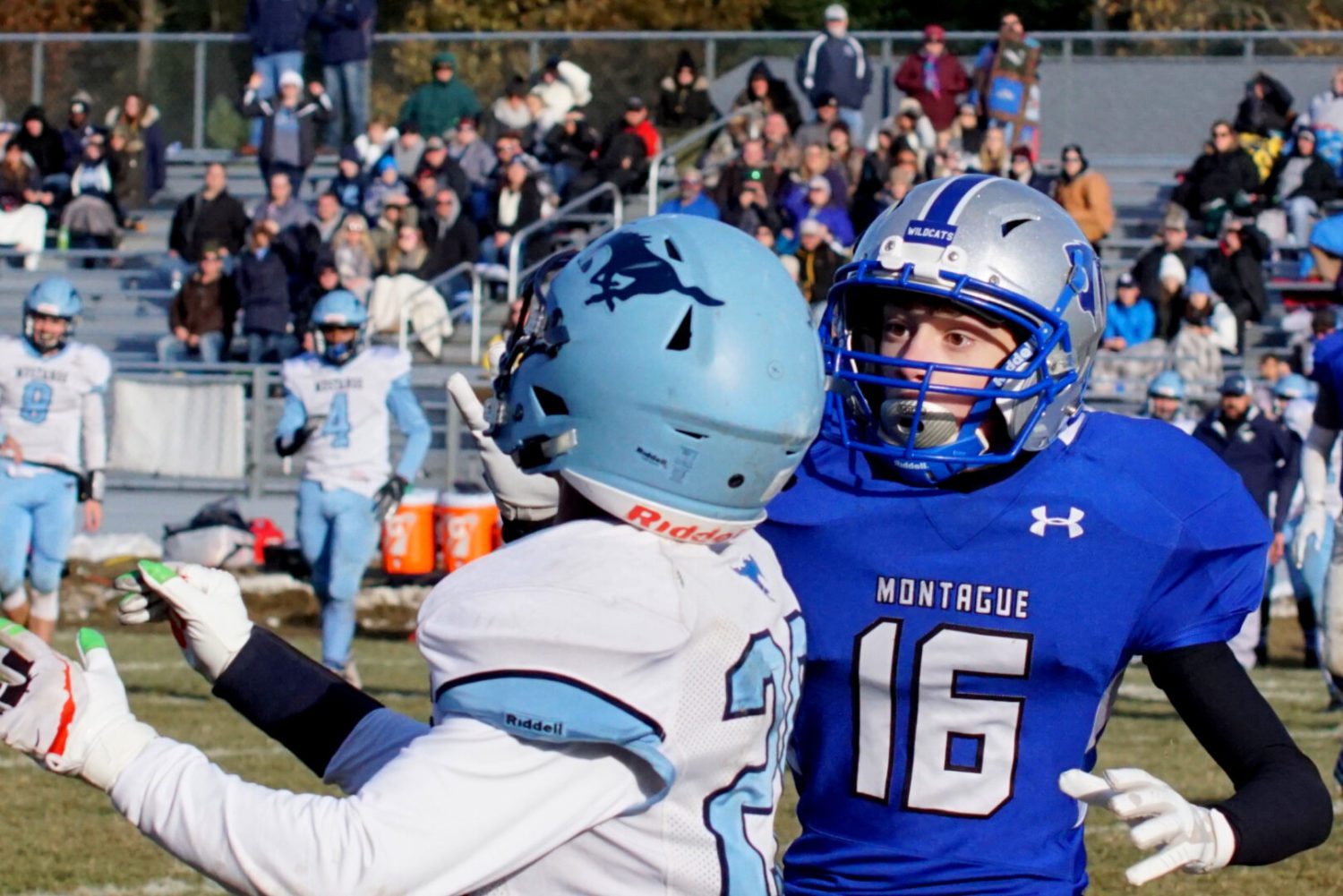 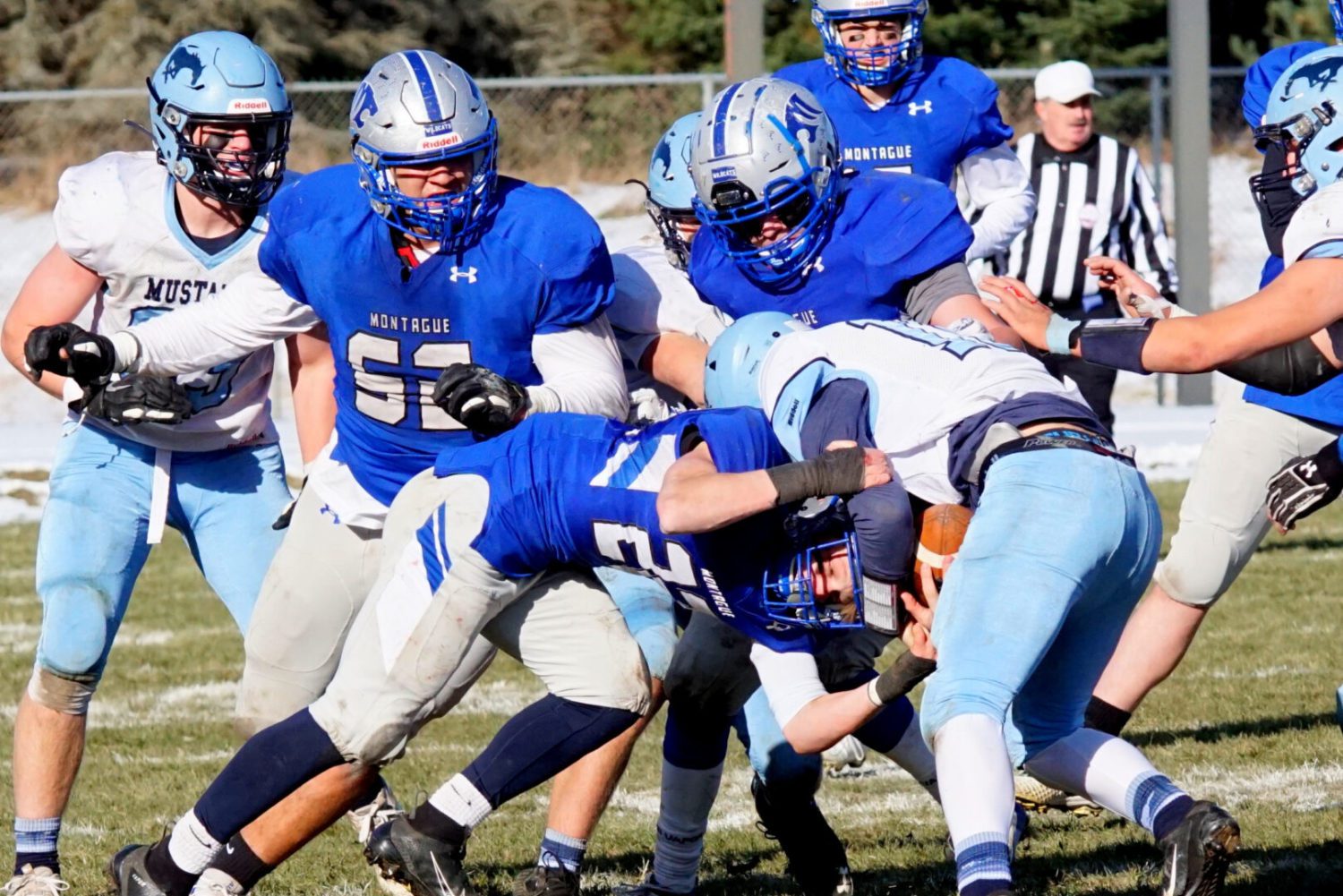 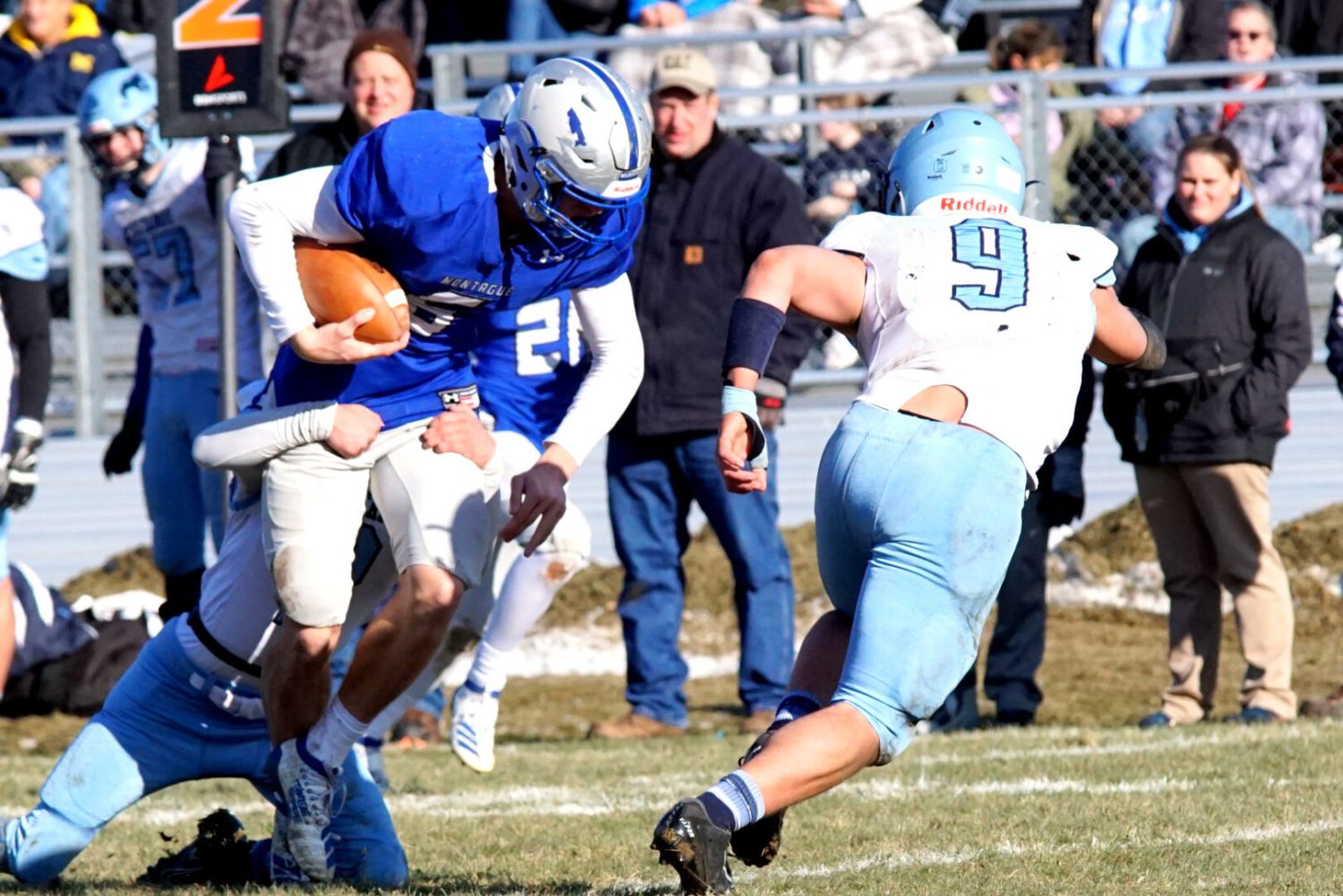 Brnna Schwarz gets tied up on the rush for Montague. Photo/Leo Valdez 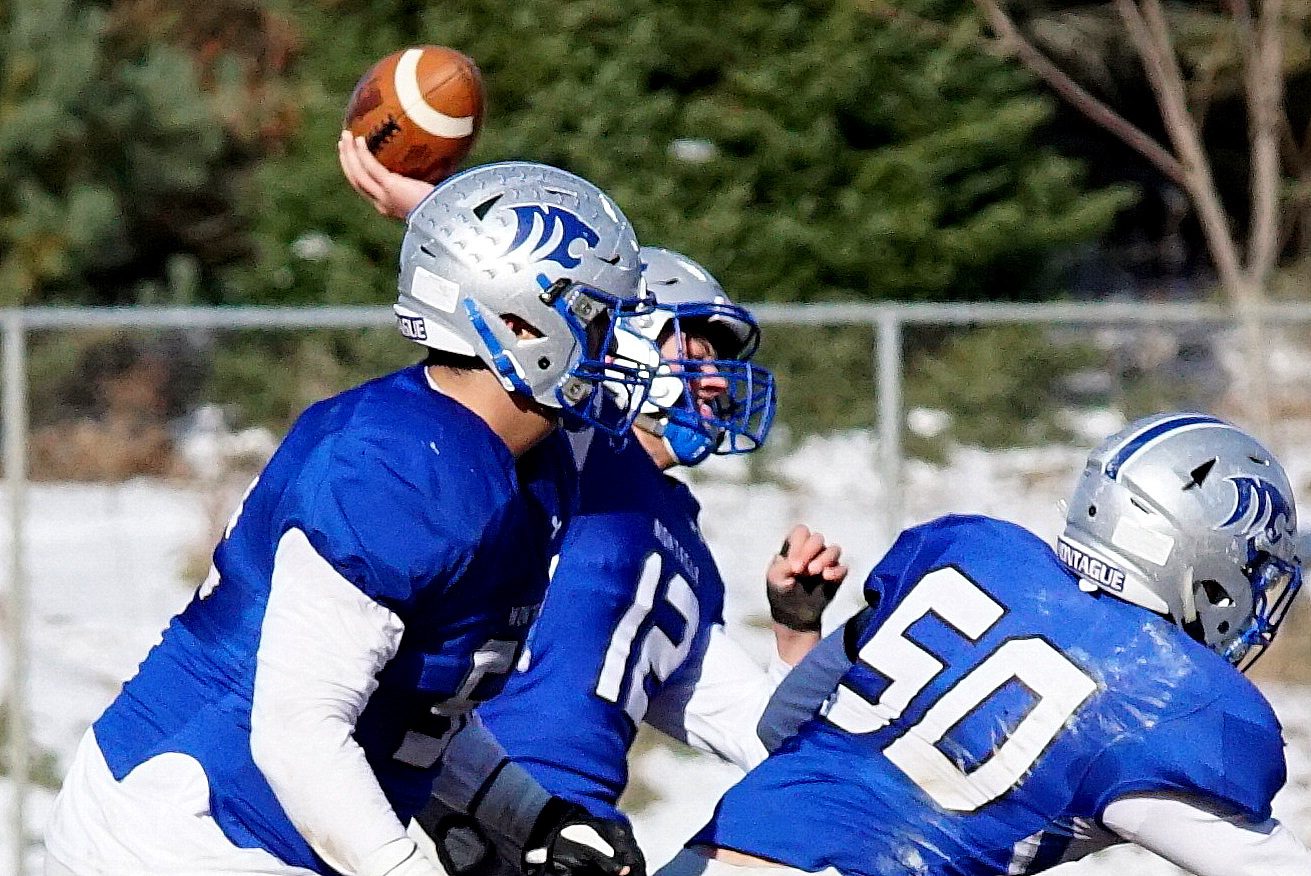 No. 12 Drew Collins makes a pass for Montague. Photo/Leo Valdez 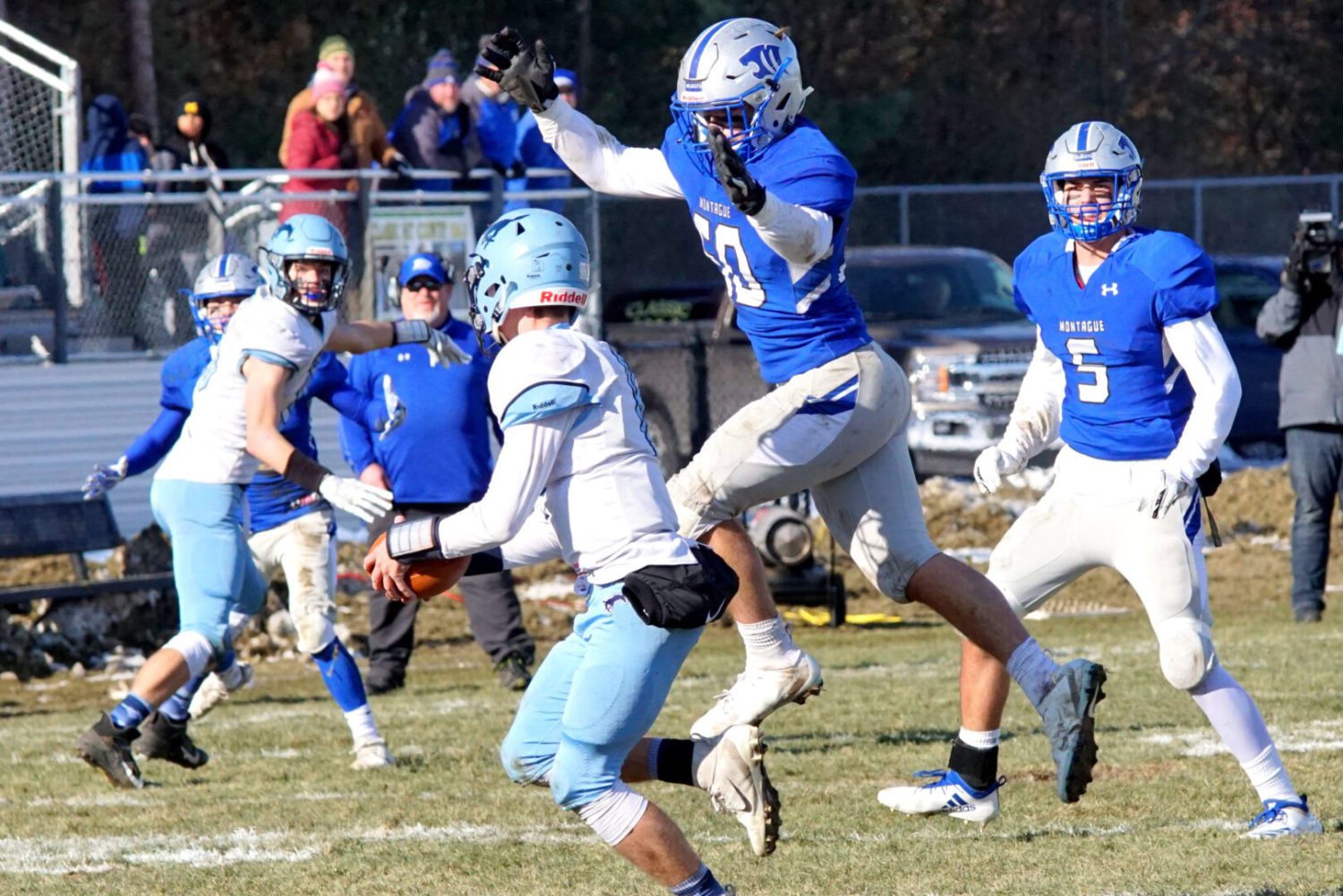 Montague’s No. 50 Mark Vanderleest jumps up to stop the Meridian pass. Photo/Leo Valdez 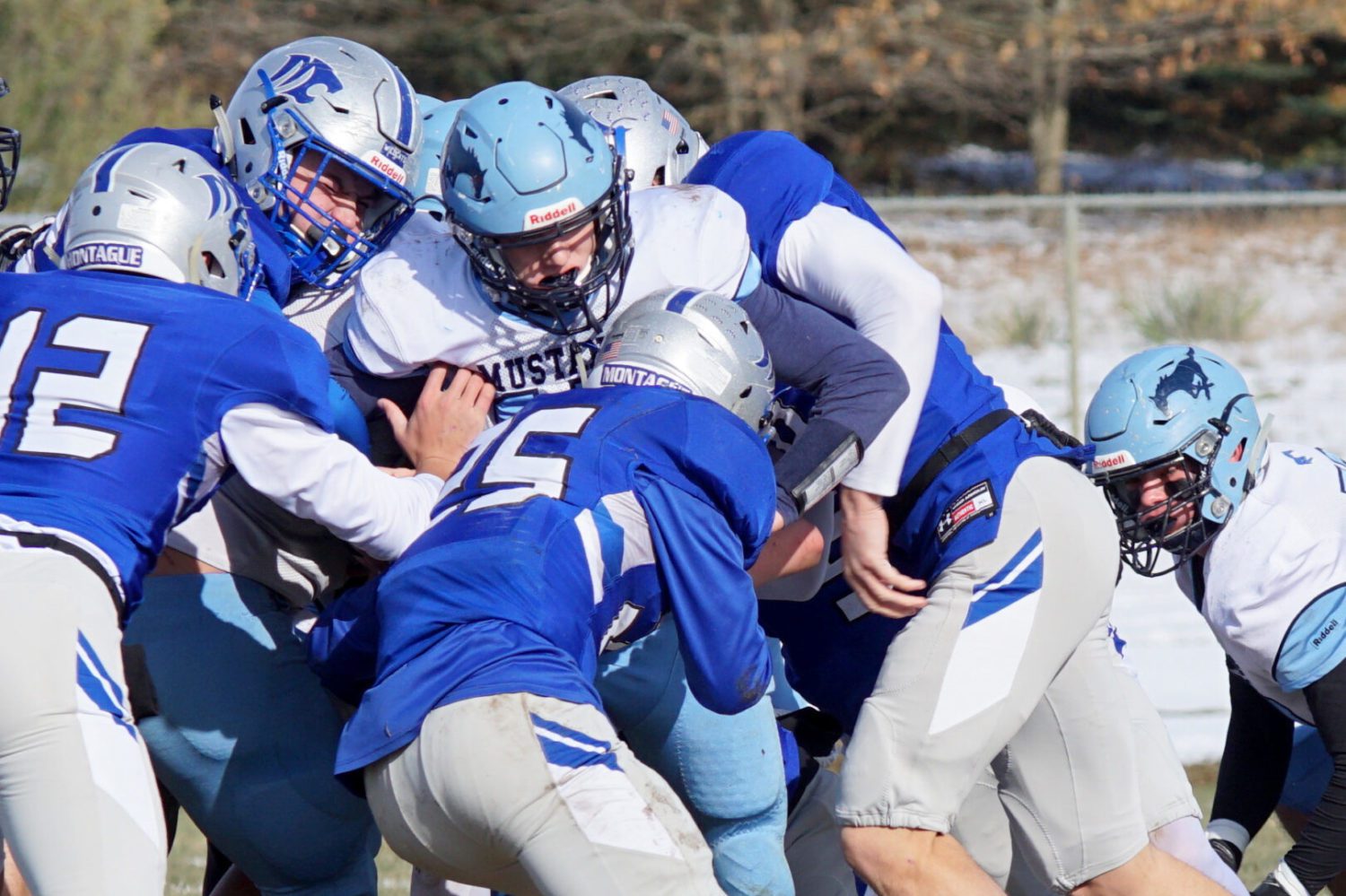