After a rough 2018-19 season, Fruitport girls basketball squad off to a strong 4-1 start

FRUITPORT – Competing and coaching in any sport can be a humbling experience, and Fruitport girls basketball coach Bob German has

experienced both the highs and lows. 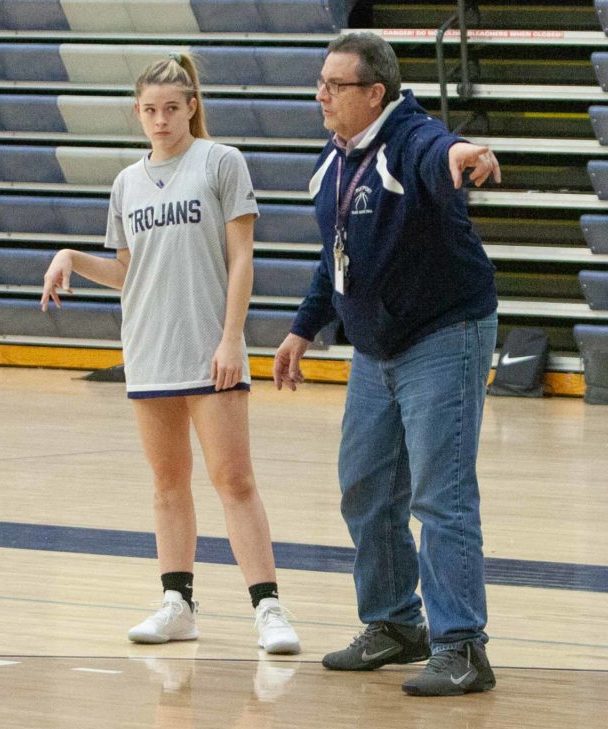 The 1974 Fruitport graduate said he won “maybe six or seven games total,” during his playing days with the Trojans, but over the next two seasons as a player at Muskegon Community College, he was a part of teams that won as many as 30 in a season.

“I think I’ve learned a lot more from losing than I did during those winning seasons,” German said. “Just from the aspect of when you’re down, how you need to still go after it and put the work in every day at practice. That reveals a lot of character. There’s a lot of life lessons you can pick up after a loss.

“But don’t get me wrong. There’s definitely a high in winning. I’d be lying if I said there wasn’t. But with it comes a lot more added pressure.”

German will gladly deal with a little more pressure this season, his 10th as head coach of the Fruitport squad. The Trojans surprised many – including themselves – by jumping out to a 4-1 start this season, especially on the heels of a dismal 2018-19 campaign, when they started 0-12 and finished 5-18.

The definite highlight so far was a one-point victory in overtime against neighboring rival Spring Lake on Dec. 13. Sydney Bol’s turnaround bank shot in the closing seconds proved to be the game-winner in a 42-41 thriller. 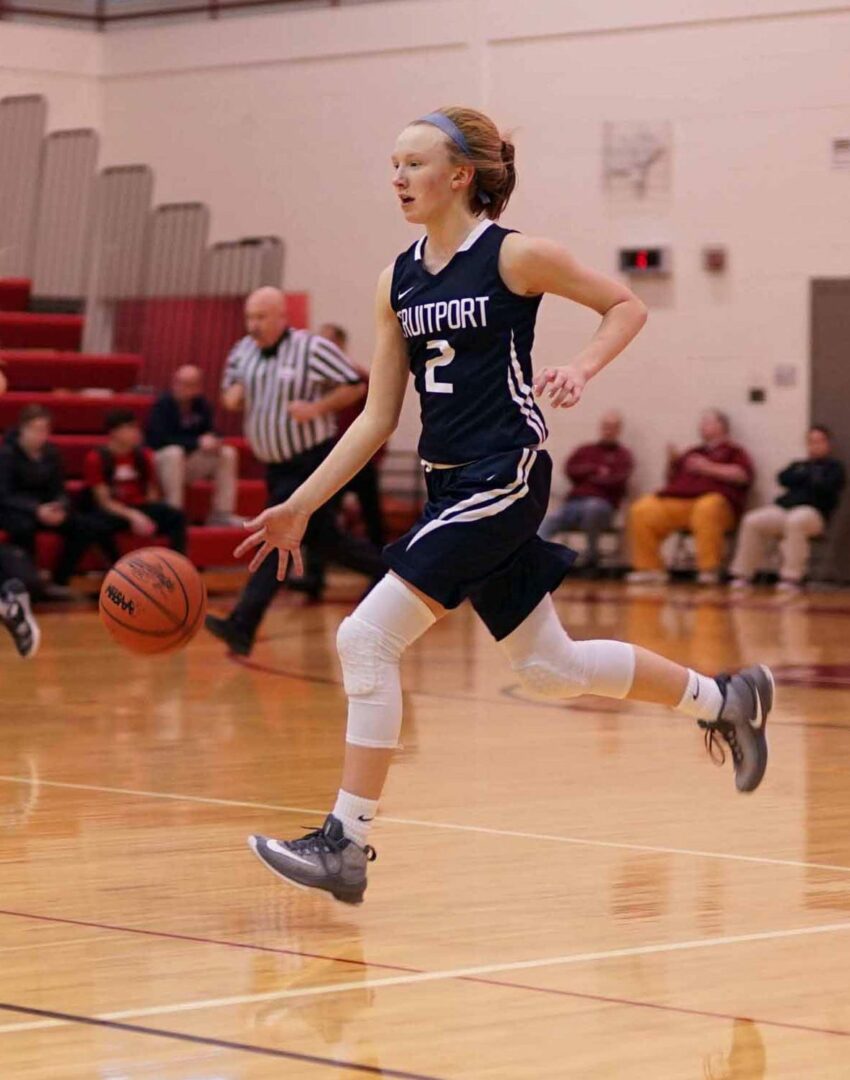 Sydney Bol brings the ball up for Fruitport during a game last season. Photo/Sherry Wahr

“It was crazy,” said Bols a 5-foot-9 senior guard who has aspirations at playing at the college level. “I had a smaller guard on me, so I told myself if I get it, I can post up and do this. After that, I kind of just blacked out. But I definitely remember the celebration.”

Although it’s early, Fruitport’s turnaround in one year’s time is somewhat stunning. Last year at this time, the Trojans scored only nine points – total – in a loss to Spring Lake.

The big problems were injuries and sickness. Bol missed several games due to pneumonia, while senior post player Ellie Fisher was out four weeks due to a concussion. The missing players and early losing streak snowballed into an avalanche. Players starting doubting themselves and the effort waned, according to Fisher.

“I didn’t realize how bad it was last year,” she said. “But it’s so much different now. At halftime (against Spring Lake) I just knew we had an ability to go out there and play at a high level. I don’t think we could have played another game that night because we left everything out there.”

Fisher has thrived in the low post, tallying 14, 17 and 18-rebound games so far this season. She also prides herself on cleaning up the glass for putbacks on the offensive end. 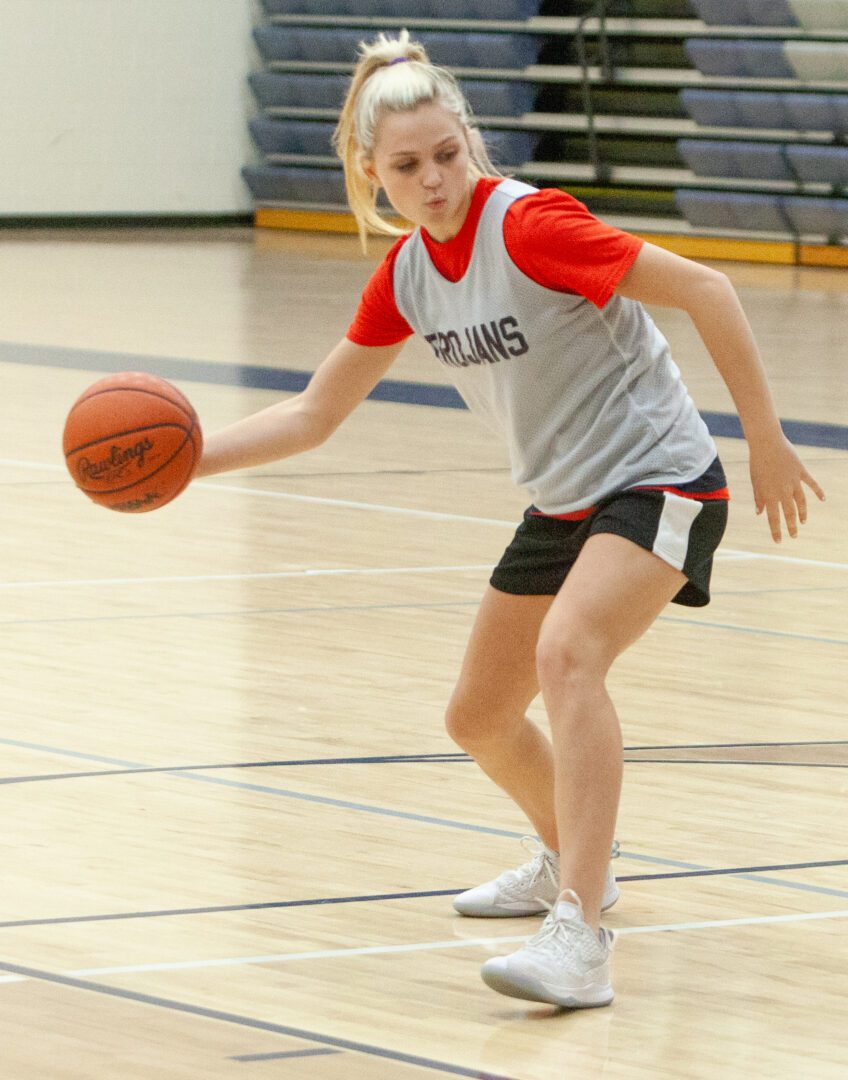 Ellie Fisher looks to make a pass during a practice drill at Fruitport. Photo/Jason Goorman

“I looked through our records before the season and saw that 219 is the record (for rebounds in a season),” she said. “Then, when the season started, it was like, ‘Wow, that’s a lot of rebounds, I’m not sure.’ But if I put my mind to it, I might be able to reach it.”

The Trojans’ turnaround began in the summer, when they had a team bonding trip at Grace Adventures in Mears.

“Our team chemistry is so much better this season,” said Kennah VerMerris, a 5-8 senior guard with a solid outside shooting stroke. “Second, I’d say our effort is a lot better. We’re a lot more ambitious. German is pushing us a lot to focus on the small things.”

Although the team lost junior guard Kristin Lord to a dislocated kneecap in its opening game, the Trojans have better depth compared to a year ago. According to German, there were times last season when he wasn’t sure who he could bring off the bench for substitutions.

This season players like junior guards Willo Staal and Andi Quasebarth have added scoring punch around the perimeter, and have allowed the Trojans to be more aggressive defensively. 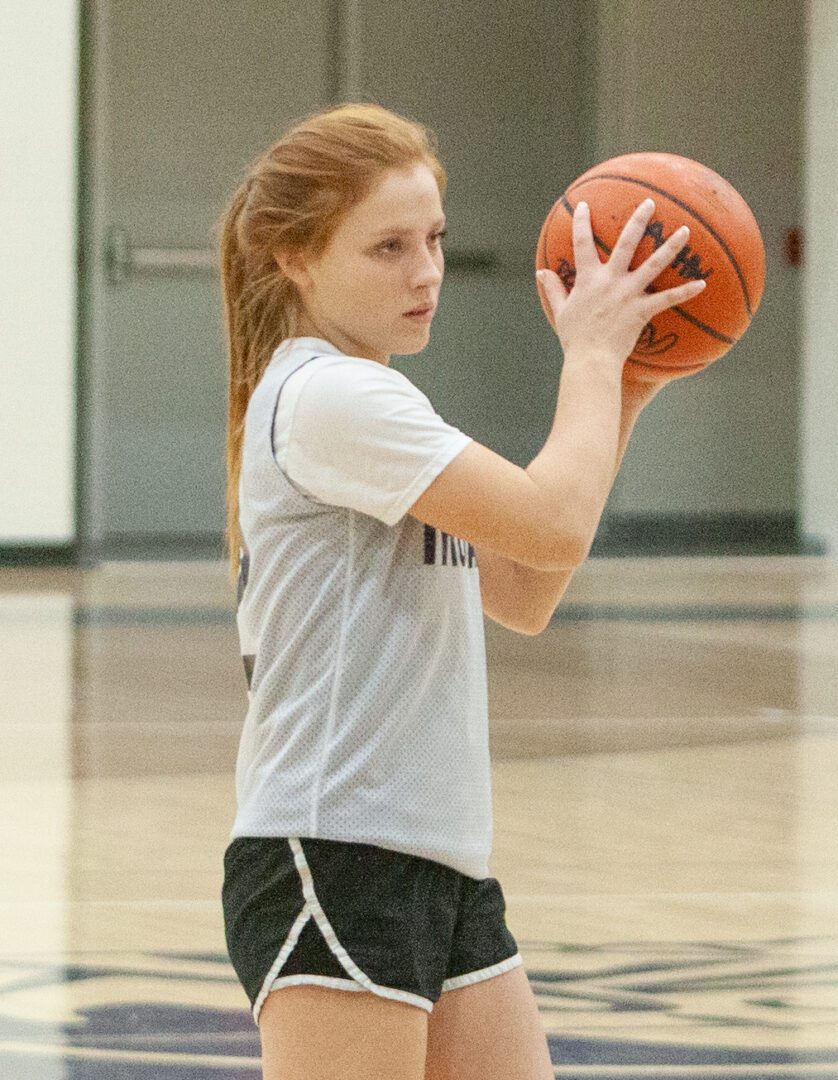 Cassie Kohnke waits for a play to develop to make a pass during practice at Fruitport. Photo/Jason Goorman

“We want to make it as difficult as we can on people (defensively),” German said. “We’re playing a lot more man-to-man now. Before we’d stick in a zone because we were concerned about our depth.”

Offensively, players aren’t concerned about who’s scoring, because they have several capable of hitting double figures.

“We share the ball really well,” VerMerris said. “Some teams in the O-K Black (conference) have one really good player. With us, we’re more well-rounded. Yeah, Sydney and Ellie are always up there, but we’ve got a lot of players close to them.  So it’s important we share the ball.”

Lastly, it’s about effort. German said he understands the schedule is going to get tougher, but if the Trojans stay energized, many more victories could be in store, and last season’s nightmare could become a distant memory.

“The big thing is, what kind of work ethic can we bring?” the coach asked. “If we’re working hard, good things will happen. We haven’t always had that here. We can’t turn it on one second and off the next. But I think the girls are starting to buy in.”